We are pleased to announce that Douglas Justice, Associate Director of Horticulture and Collections at UBC Botanical Garden has recently been awarded the American Rhododendron Society Silver medal.

Douglas Justice, Associate Director of Horticulture and Collections at UBC Botanical Garden was awarded the Silver medal. The ARS mentioned that Douglas was a very worthy candidate for their Silver medal, as shown by the wording of his citation, perhaps in part influenced by his father, Clive Justice, who was awarded the ARS Gold medal in 2000. 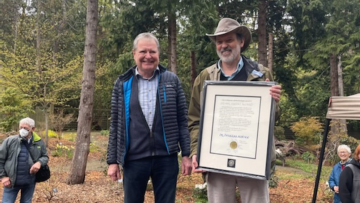 Learn more about this award:

American Rhododendron Society gold and silver medals are awarded to Society members for significant contribution over a period of time to either the Society or the genus Rhododendron, or both. Gold awards are for contributions that have national or international impact. Silver awards recognize significant regional contributions.

Citations for all gold and silver awards can be viewed on the American Rhododendron Society website.