December in the Garden 2022 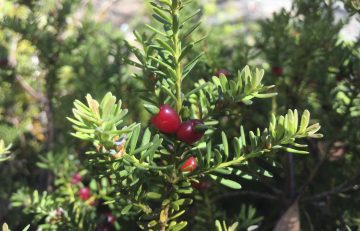 I don’t often mention the Botanical Garden’s conifers in these pages, but that doesn’t mean we don’t have ones worth investigating. Writing this blog in mid-November, I have no idea whether the garden in December will be blanketed with snow or soaked by unrelenting rain. But that hardly matters to these resilient evergreens. I should amend that to say that conifers are mostly resilient evergreens—a few are not so cold hardy and some are deciduous. High on the list of locally-cold-vulnerable species is Wollemia nobilis (Wollemi pine). This is not a pine, but a monkey puzzle relative, and a critically endangered species native to the Blue Mountains of eastern Australia (New South Wales). Safely ensconced in the mildest area of the Asian Garden on the leafy slope west and below the Ting (at the end of the boardwalk), our Wollemi was keeping pace with a wonderfully robust group of Viburnum cinnamomifolium; that is, until last winter’s frost-pocalypse. Now, the Wollemi barely shows its browned, dead top just beyond the viburnums. A dead tree is hardly a good way to start a tour—but the tree isn’t dead! This July, two strong sprouts showed up at its base and have been growing fast. Watch this space!

Staying with the “temperate Australasian conifers” theme, the Australasian section of the E. H. Lohbrunner Alpine Garden (representing plants from Australia and New Zealand) provides a multitude of fascinating examples. Our smallest are a couple of ground-hugging podocarpus (plum yew) relatives. Microcachrys tetragona (strawberry pine) is planted opposite the large Eucalyptus coccifera. Strawberry pine (again, not a real pine) is a Tasmanian endemic species with slender stringy stems, small, tiny appressed bright green leaves and pea-sized, red fleshy seedcones. In the same bed to the east, at the foot of the great green blanket of Coprosma atropurpurea, is Lepidothamnus laxifolius (pygmy pine). This New Zealand native has even slenderer stems, but is branchier, with tiny, bristly, olive-green-turning-brown leaves. It is an even more unlikely-looking conifer—in the winter resembling a disorganized pile of twigs. It requires a good eye to pick both species out from their surroundings. Most of the Australasian conifers in the Botanical Garden’s collection are larger shrubs, and rather more conspicuous than the aforementioned pair. The upright cypress-like olive green conifers situated near the north and south ends of the main bed in the Australasian Section are specimens of Halocarpus bidwillii (bog pine). Halocarpus are unusual podocarps (all Podocarpus relatives are known as podocarps). The bog pine’s claim to fame is the curious white, doughnut-shaped collar that surrounds the seed. Our plants have never displayed this striking and unusual seed appendage (sadly, we have only males). More notable, perhaps, is that these shrubs survive Vancouver winters at all, given that the literature suggests a tolerance of only minus 7 C in their native New Zealand. It might be time to try this species a little further afield.

One of the cold-hardiest podocarps in the collection is Podocarpus acutifolius (needle-leaved totara). Another New Zealand endemic, this species is never anything more than a dense shrub here but can be a small tree where it’s native. It has surprisingly stiff and sharp needles (acuti = sharp + folius = leaf) that change from yellow-green in summer to an unusual burnished bronze-green or copper colour in winter. Ours is an overbearing bush that requires occasional renovation to prevent it from overtaking the path. Proceed up the hill a few steps to see Phyllocladus alpinus (alpine celery-top pine), an extraordinary Tasmanian podocarp. The foliage is not what most people think it is. The scalloped, blue-green, leaf-like, photosynthetic organs are not leaves but flattened branches known as cladodes. While unique among the conifers, cladodes are represented in a range of flowering plant families. The green segmented stems of the Christmas cactus and the pads of opuntias (prickly pears) are cladodes, for example.

Finally, the most numerous podocarps in the Garden are a pair of similar-looking mounding shrubs, Podocarpus lawrencei (mountain plum pine) and Podocarpus nivalis (alpine totara). Both high-mountain species, P. lawrencei is from Tasmania and southern Australia, and P. nivalis from New Zealand. Podocarpus are generally dioecious plants; that is, there are separate male and female plants. Female plants of both species bear their seeds nestled in the axils of the short, blunt needles near the branch tips. Each seed is covered by a greenish, fleshy covering, but below it is an enlarged, fleshy, cherry-red structure that serves as an attractant for dispersal by animals. There are two male cultivars of P. nivalis in the Alpine Garden—‘Otari’ and ‘Jack’s Pass’—and these show some of the variations that might be seen in the wild. Compared with P. lawrencei, P. nivalis is more sprawling with laxer stems, but the two species are rather difficult to tell apart. They readily hybridize (another cultivar, ‘Kilworth Cream’ is a presumed P. lawrencei – P. nivalis hybrid)— and hybrid seedlings are certainly common in the Alpine Garden. The various offspring are identified with red labels. 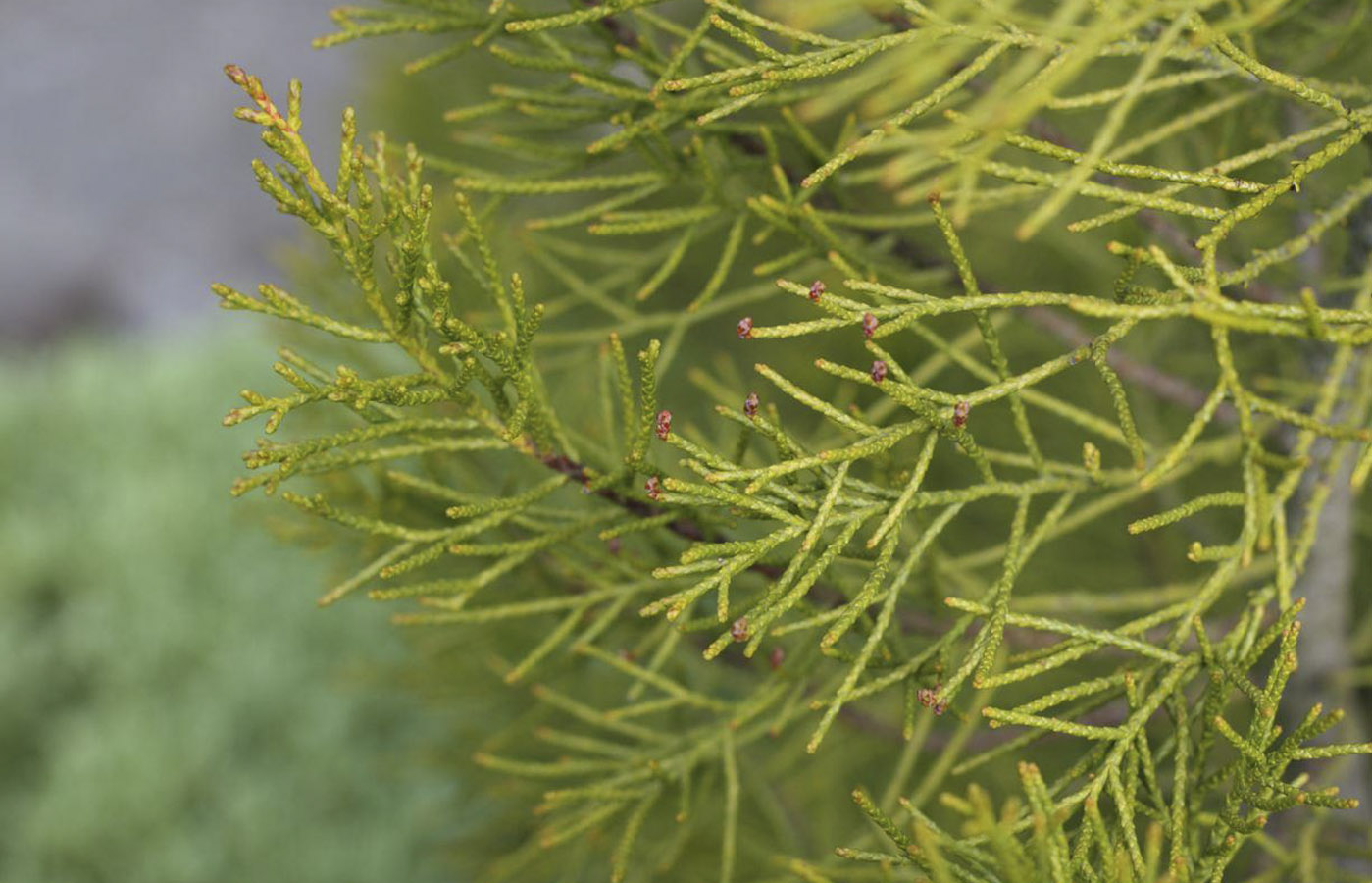 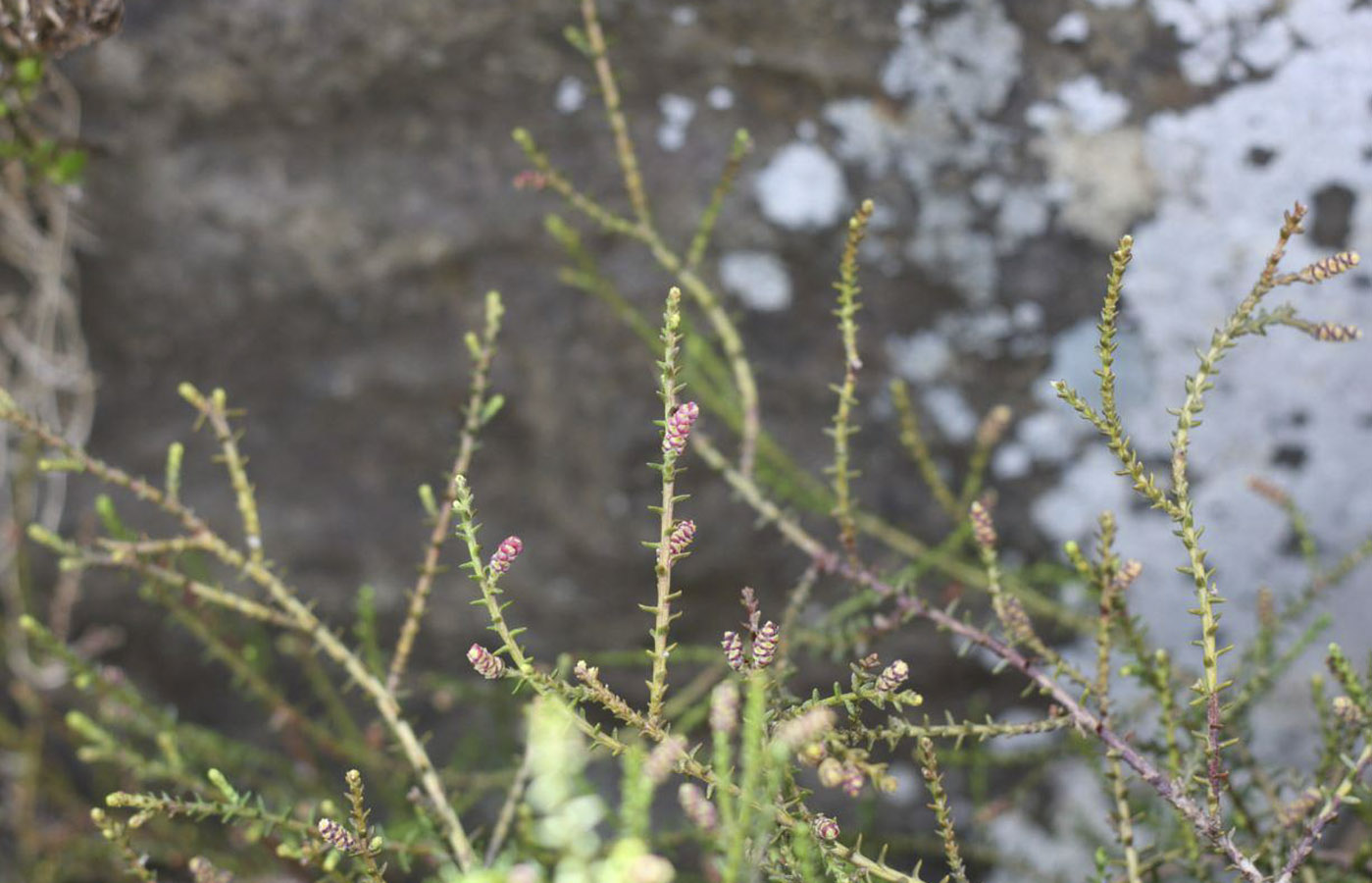 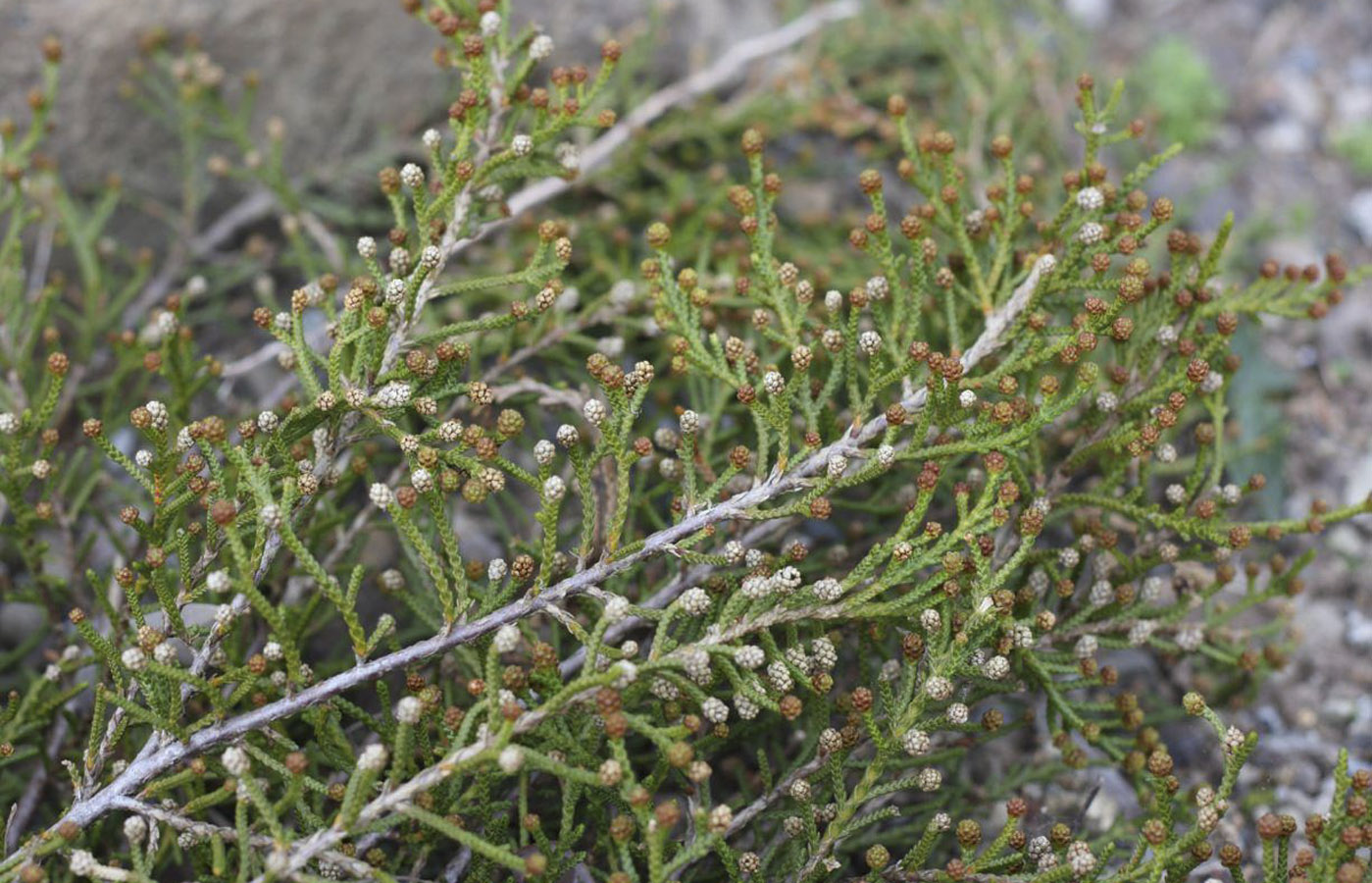 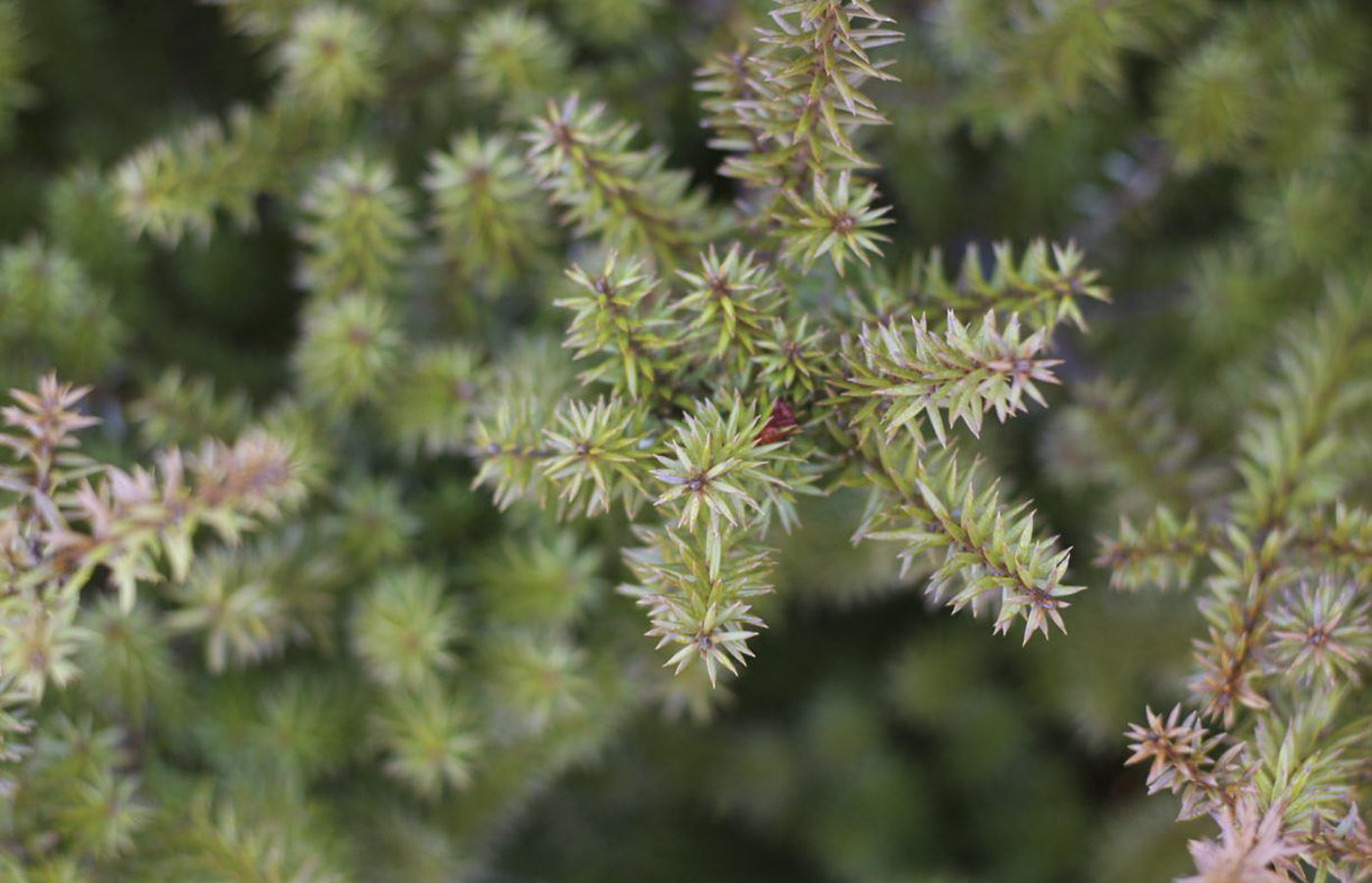 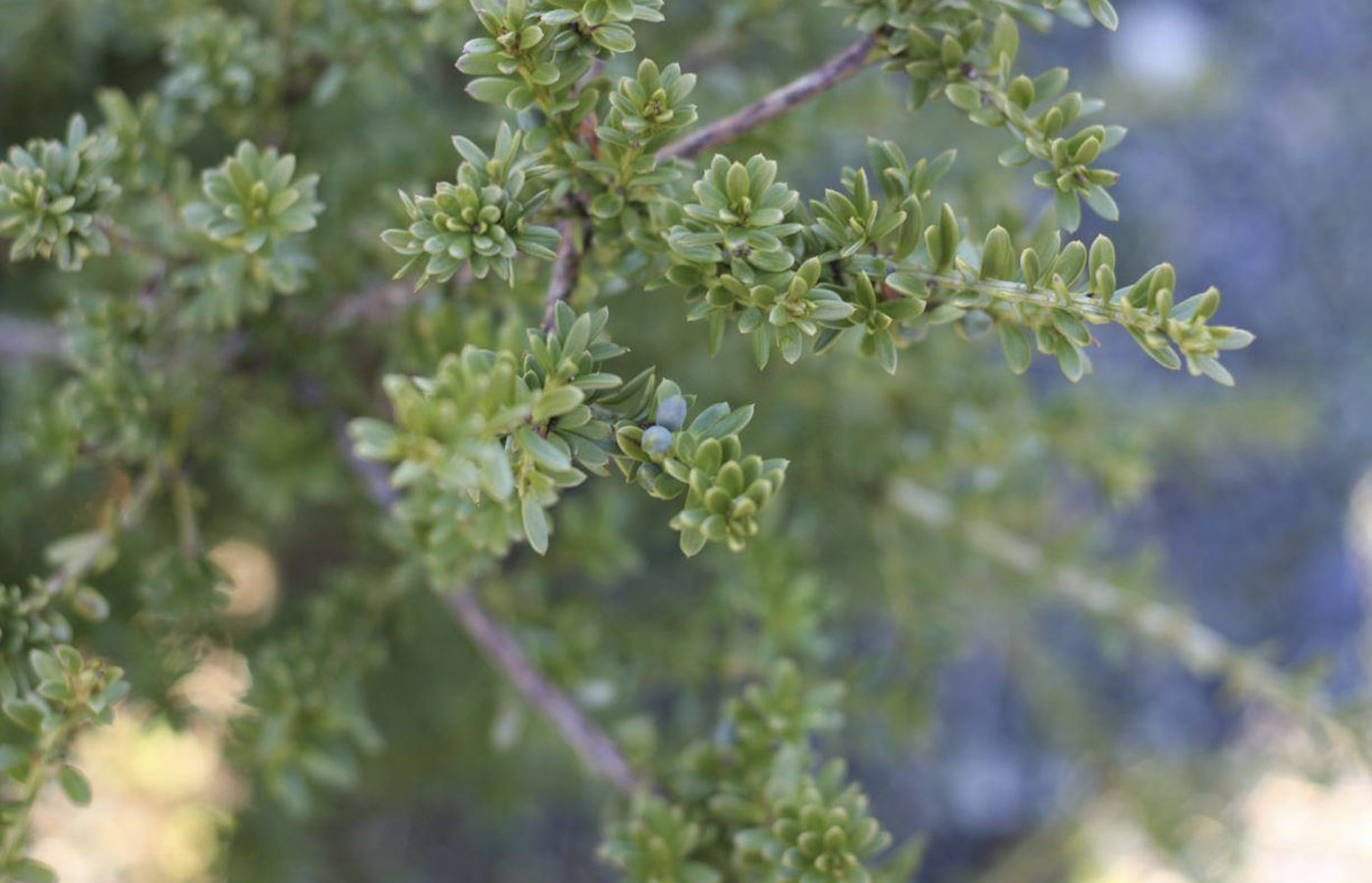 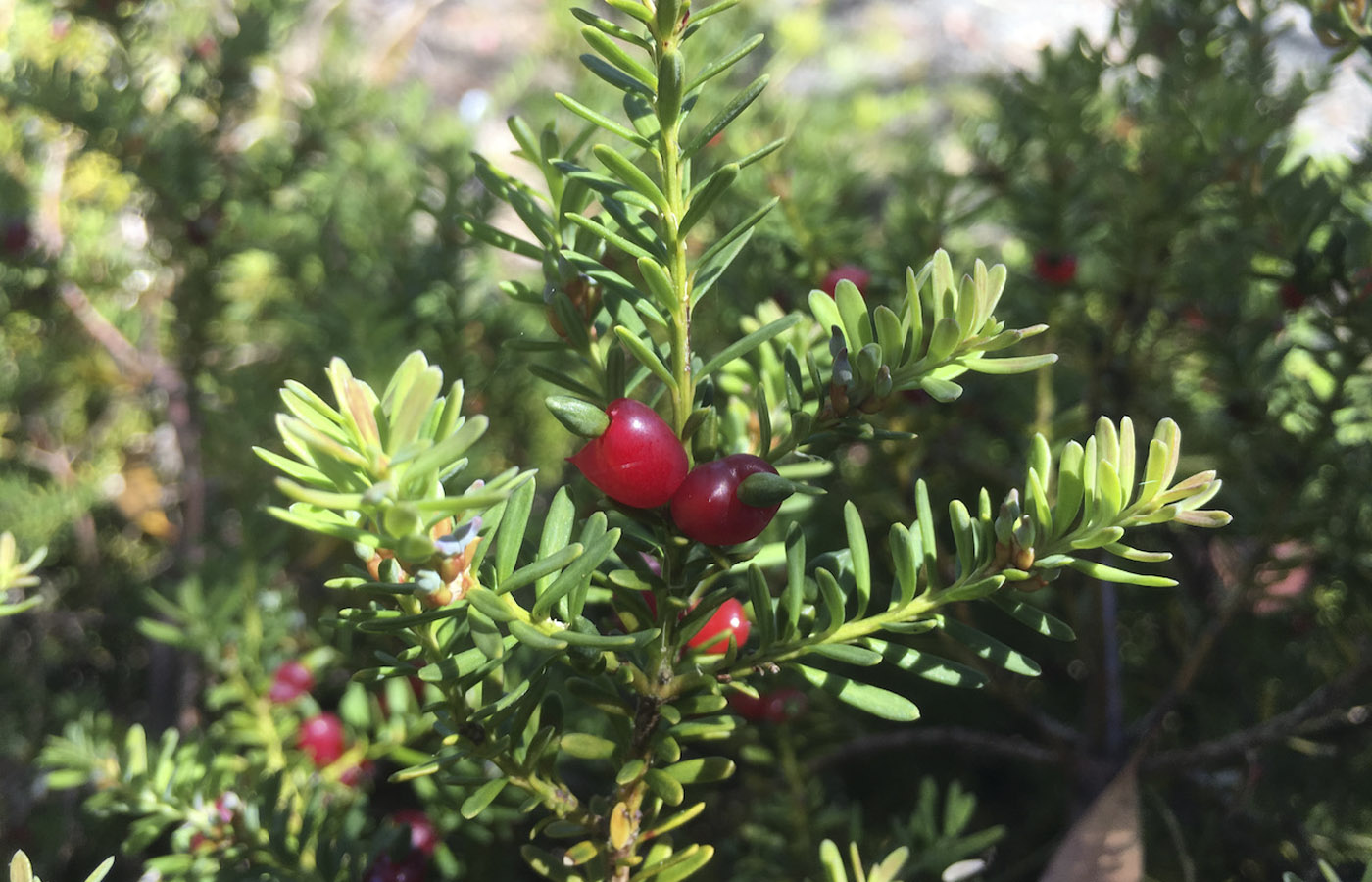 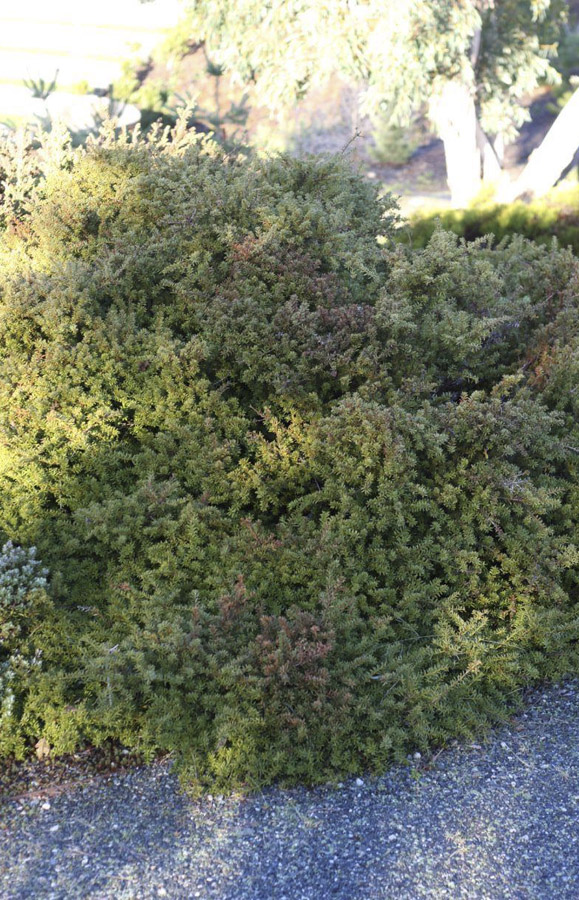 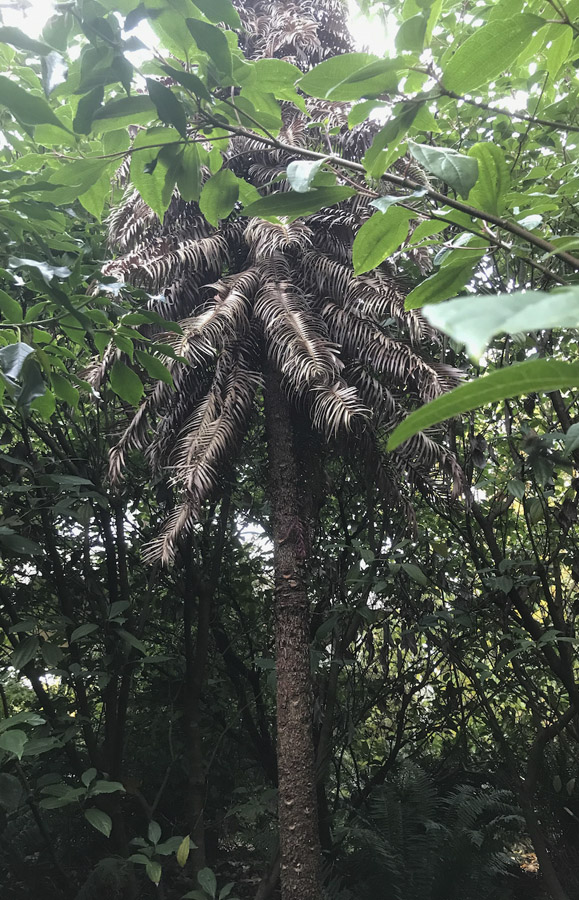 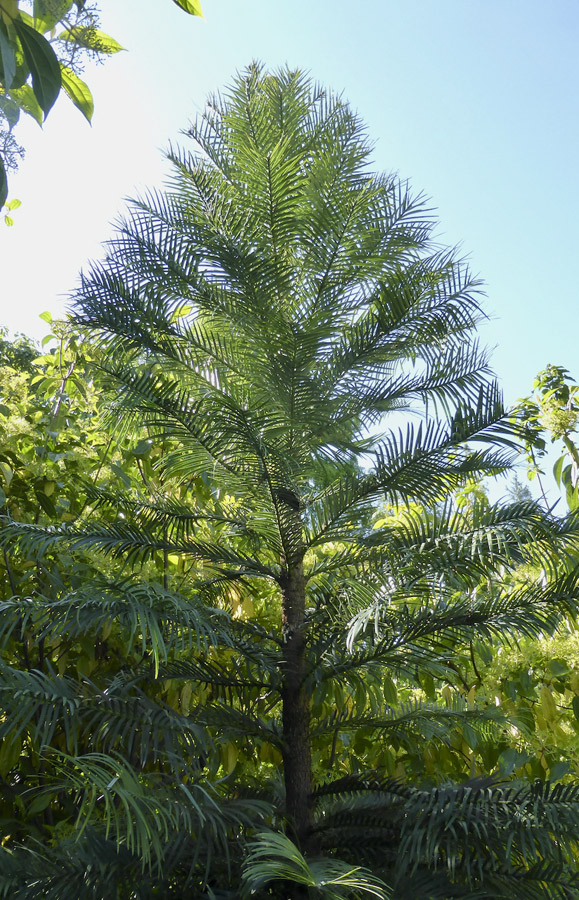 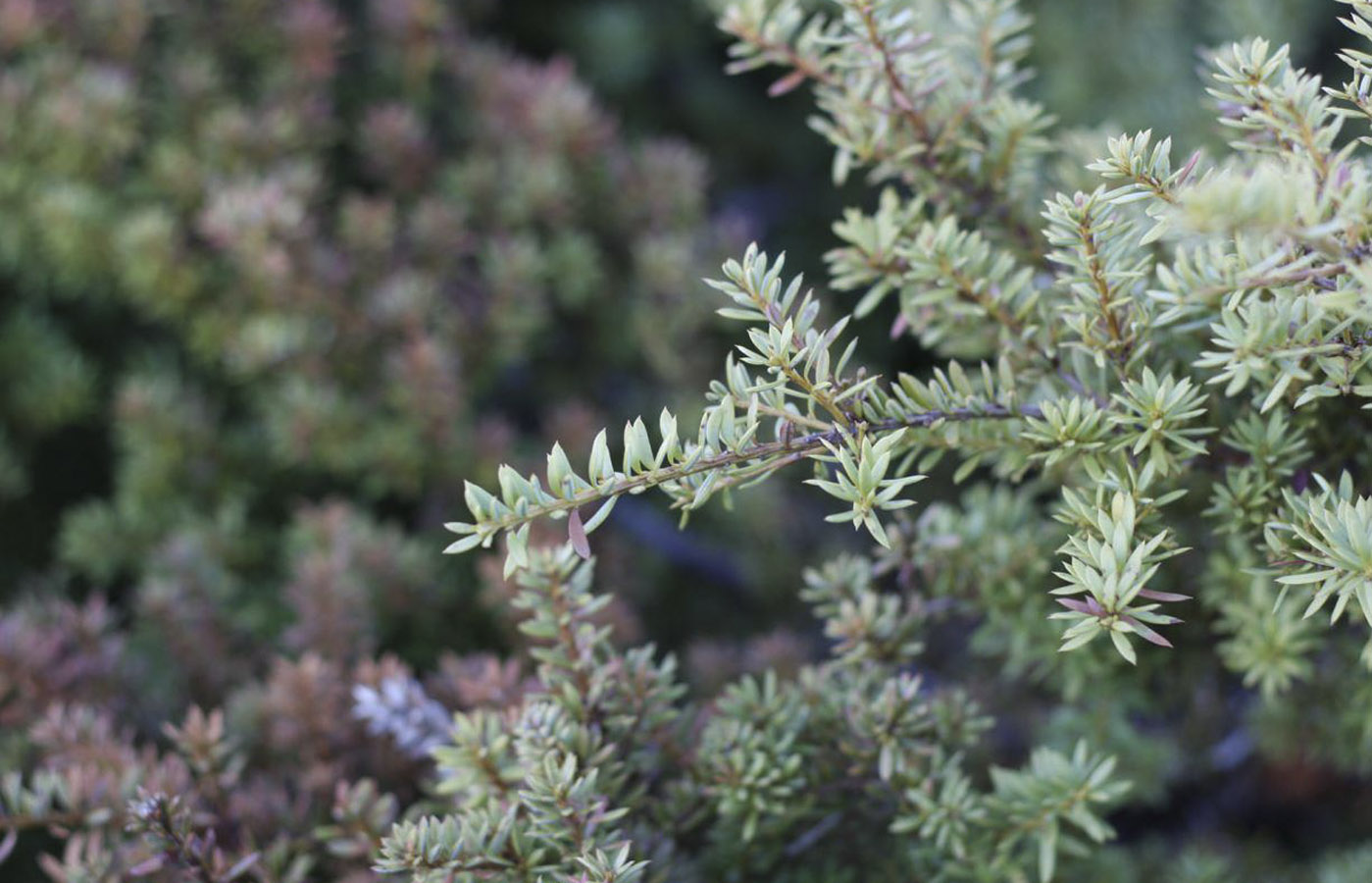 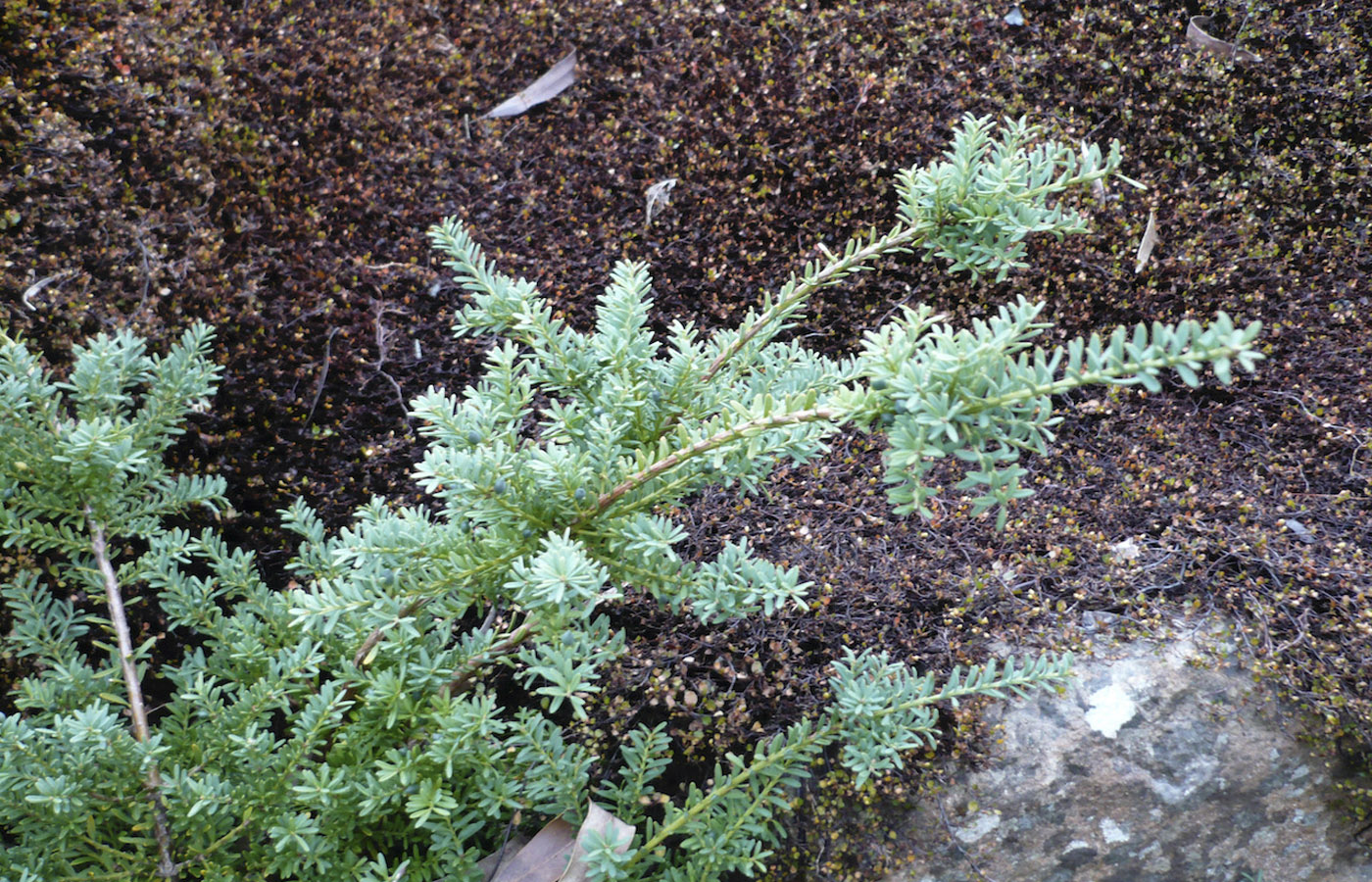 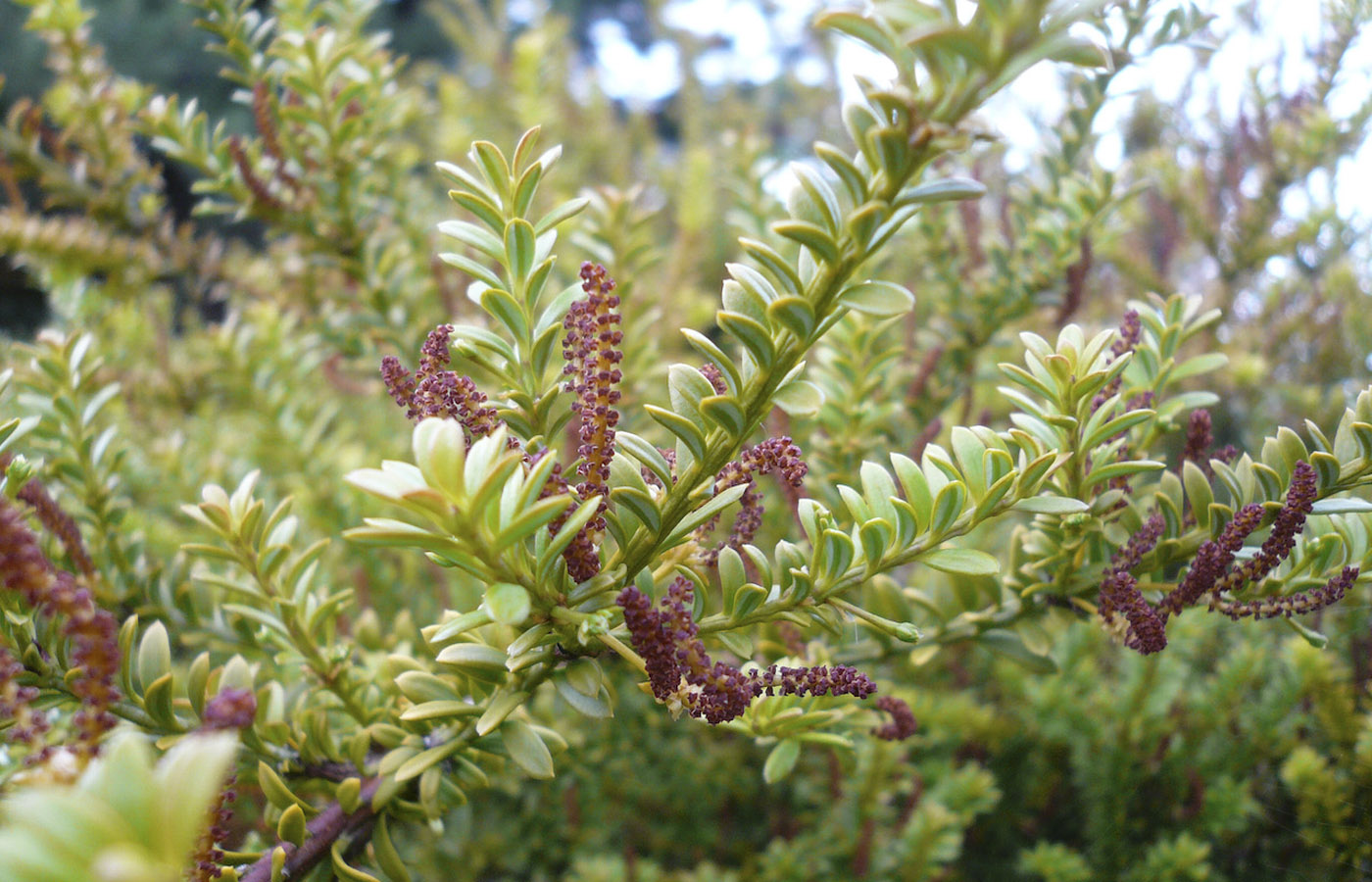 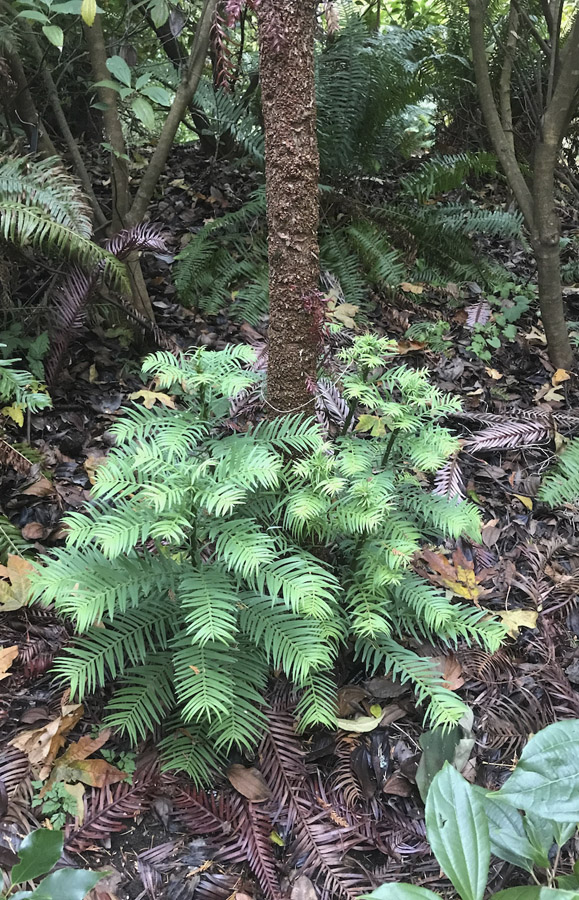 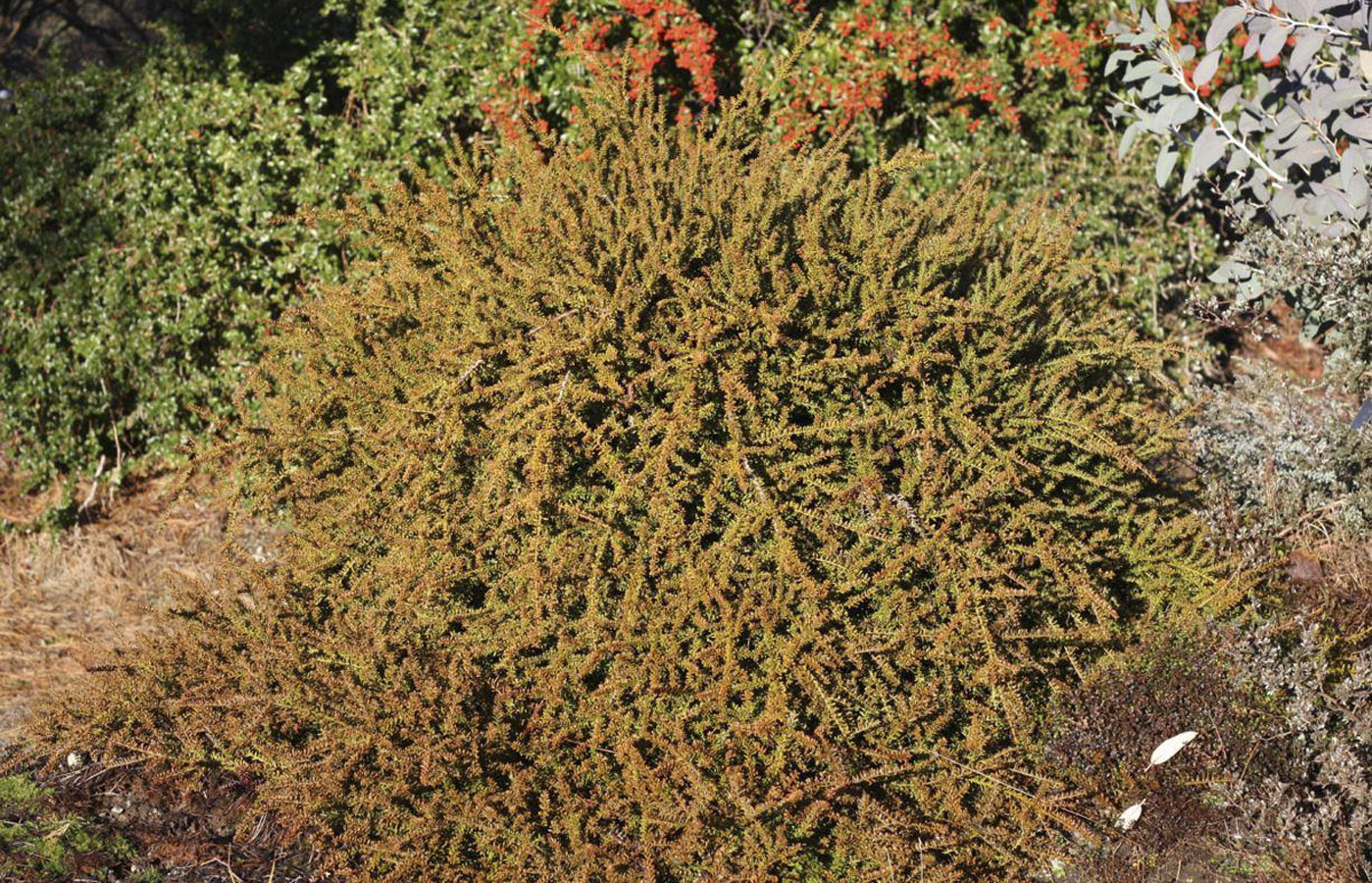 By Garden Communications on November 18, 2022