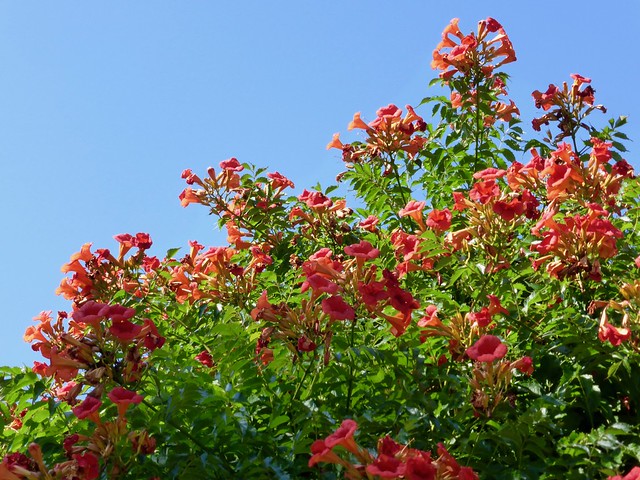 August is a bountiful time for gardeners. That is, unless you’re like me in being lazy and forgetting to water when the temperature rises in summer (I’m a shade person). Thankfully, staff at the Botanical Garden are more responsible. About this time in the Food Garden, globe artichokes, Cynara cardunculus Scolymus Group, are ripening, but they are not allowed to flower. Artichokes are harvested when the phyllaries (the green bracts that encircle the flowerhead) are plump, but before they begin to spread apart and dry out. The artichoke’s wild progenitor, the cardoon (Cynara cardunculus) has tougher, spinier, inedible phyllaries, but is a valued ornamental. In southern Europe it is also grown for its edible, tender young shoots, which evidently taste mildly of artichoke. The purple and blue flowers of cardoons are spectacular—as are those of artichokes, if they are left to open up—and they are enormously popular with bees of all kinds.

Things are moving along elsewhere in the Garden, too. In the David C. Lam Asian Garden, shrubs and trees are berry-ing up and late perennials are blooming with their usual abandon. Kirengeshoma palmata (yellow wax bells) is a much-loved perennial. The broad, jagged-edged pairs of leaves surmounted by tubular yellow flowers on wire-like stalks are familiar to any regular visitor to the Asian Garden. Inside the Garden at least, Kirengeshoma is in no need of a campaign to popularize it, but Hydrangea bifida (fork-leaved deinanthe) which is definitely an unusual-looking perennial (previously known as Deinanthe bifida, and one of only about a dozen herbaceous hydrangeas) is seldom noticed by passersby. Its leaves are those of a dwarf, hairy hydrangea, but the leaf-tips are split partway down the midrib and spread in two. The flowers are each about 2.5 cm (one inch) across and white, but inverted in the manner of a hellebore, to provide (I assume) protection for the flower’s inner workings from rain. A largish group of individuals was recently relocated from a sunny spot into a cooler, more suitably shaded position on Lower Asian Way near Straley Trail. Hydrangea caerulea, a blue-flowered version of the fork-leaved deinanthe can be found in the Asian woodland section of the Alpine Garden. Because of the warmer and brighter conditions there, flowering of the blue deinanthe will probably be all but over by August.

The riot of colour that is the E.H. Lohbrunner Alpine Garden in summer, hardy abates in August, and plants from especially southern Africa (e.g., Kniphofia, Phygelius, and Watsonia), South America (Lobelia tupa), Europe (Ceratostigma) and North America (Epilobium canum), keep our visitors and winged pollinators enthralled. However, above the pond in the Asian section visitors will see one of the wonders of the Alpine Garden in Lespedeza thunbergii (Japanese bush clover). This pea relative produces loosely arching stems that grow 3 m (10 feet) or more, forming a great, elegantly sprawling fountain of silver-backed, dark green foliage. Starting in August, tiny, rosy-purple flowers will appear in their thousands, in huge, drooping panicle-like displays at the tips of the sprawling branches.

Campsis ´ tagliabuana is a cross between the eastern North American C. radicans and the Chinese C. grandiflora that was first made in the late 1800s in a nursery in the Lombardy region of Italy (by the brothers Tagliabue). The two species are self-sticking climbers noted for their summer-borne, orange to red, trumpet-shaped flowers. The American parent, which is the more narrow-tubed (and hummingbird pollinated), climbs happily into trees in the Carolinian Forest Garden. There are plants in both the Rafinesque and Marshall Groves; however, as the plants are shaded and only just finding their way, it will take some time before they will make a big floral impression. In the meantime, be sure to check out what is arguably the most impressive of all August-flowering plants in the Botanical Garden, at the eastern end of the Arbour, just north of Food Garden. Campsis ´ tagliabuana ‘Madame Galen’ climbs to the lowest summit of this massive structure and produces magnificent clusters of huge, deep-orange flowers at the tips of nearly every branch from late July until mid-September.