Despite its small size, UBC Botanical Garden is well known for the diversity and quality of its plant collections. The conditions at UBC are ideal for the cultivation of a large number of temperate plant groups, and the garden has a history of growing plants from documented, wild-collected—that is, known-provenance—seeds. Wild species in the genus Acer (maple) represent one of the Garden’s most significant collections. The number and proportion of rare species in the collection, their known-provenance status and accurate documentation has led Botanic Gardens Conservation International (BGCI) to recognize it as the second most important conservation collection of maples in the world (after the Arnold Arboretum collection). In part to increase the visibility and availability of the collection to researchers, the Garden applied to the North American Plant Collections Consortium (NAPCC) to join with ten other botanical institutions in creating a multi-institutional maple collection. UBC Botanical Garden was granted full membership in this multi-site collection in 2008.

There are some 130 Acer species, most of them inhabiting moderately cool and moist environments in mountainous terrain around the Northern Hemisphere. The vast majority are native to Asia, and about half this number are represented at UBC Botanical Garden. However, 65 species do not tell the whole story. Maples are often highly variable within species, the ranks of easily recognized infra-specific taxa (i.e., subspecies, varietas and forma) being exceptionally common in the majority of species. For example, Acer glabrum (Rocky Mountain maple), is known by at least five morphologically and geographically distinctive variants, four of which are present in the Garden. In total, the Garden has 250 separate accessions representing 119 Acer taxa, of which 30 are named horticultural selections and 168 are derived from wild collected seed.

Maples naturally segregate into identifiable groups based on floral structure, leaf characteristics and wood anatomy. Traditionally, these subgroups of the genus are known as sections. Recently, molecular genetic analyses have shed some light on phylogenetic (evolutionary) relationships, but in most cases the resulting classification is not much different from that based on more obvious characters. The Garden has examples of all but one section of the genus, and two sections—Palmata, the fork-branched maples, and Macrantha, the stripe-barked maples—are exceptionally well represented. Both sections are nearly exclusively Asian (each has one species in North America) and nearly all of the species are ideally adapted to conditions here at UBC. 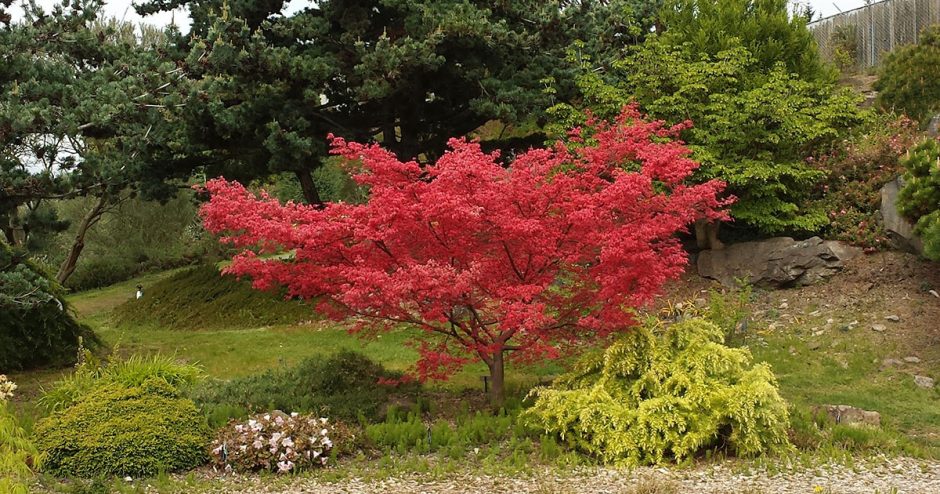 One of the reasons UBC places so highly in the BGCI index of important maple collections is our collection of the rare Acer pentaphyllum (five-finger maple), which is native to the mountains of southwestern China, and which is critically endangered in the wild. A recent seed collecting expedition to its only known habitat in the Hengduanshan (Hengduan Mountains), a rugged, difficult-to-access area in Sichuan, China, recorded only four populations of approximately 150 individual trees. Throughout that area trees of all kinds are threatened by grazing, firewood cutting, fires, landslides, road building, and flooding from the damming of rivers.

This beautiful, unusual species has been in cultivation in the West for only about 85 years, originally introduced from no more than three individual plants. There are few if any seedlings derived from this early introduction, and grafted plants from the original stock are notoriously frost tender and feeble in northern gardens. In 2010, Andy Hill, Curator of the David C. Lam Asian Garden, was part of a botanical expedition to the Hengduanshan to observe and collect Acer pentaphyllum. The group, was led by Bill McNamara, Director of the Quarryhill Botanical Garden in Glen Ellen, California. The group also included Andrew Bunting from the Scott Arboretum of Swarthmore College, in Swarthmore, Pennsylvania and Christophe Crock from Arboretum Wespelaar, in Wespelaar, Belgium. The expedition was hosted by Professor Tang Ya from Sichuan University in Chengdu, China. Sampling of wild Acer pentaphyllum for DNA for genetic fingerprinting was carried out on this trip, and a good supply of seed was collected.

As noted, the wild populations of Acer pentaphyllum are being reduced in number and its original distributional range contracted. Known as a genetic bottleneck, such a diminishment in numbers notably decreases genetic diversity in the species. In other words, there is a lesser probability that offspring from the remaining populations will display the range of variability that the species once exhibited over its original range. This can mean that traits that confer cold-hardiness, drought or heat tolerance, or resistance to a particular disease could be lost to the species, particularly if the remaining habitat does not bring those evolutionary pressures to bear. Indeed, a number of traits may already be lost. It is therefore critically important (if saving the species is the goal) to collect seeds from as many individuals and as many populations as possible, and plant them out in a variety of environments. When a species is planted outside of the native habitat, in an environment where it can be more safely maintained and reproduced, it is known as ex-situ conservation. Quarryhill had already established a large ex-situ planting of A. pentaphyllum seedlings from two previous expeditions, in 2005 and 2006.

UBC Botanical Garden’s plants are derived from 12 different seed collections from the populations of A. pentaphyllum that remained in 2010. Seed was sown at the Botanical Garden Nursery later the same year and again the following year. More than 50 of the first seedlings were planted out in various sites in the David C. Lam Asian Garden and in a field trials area, and another 50 was planted out in 2014. To date, most plants appear to be healthy and vigorous. We certainly don’t expect all or even most of our seedlings to survive the vagaries of Vancouver’s climate, but if a few thrive, they will represent genetic expression that may not be represented by surviving collections elsewhere (such as in California, Belgium, Pennsylvania or Sichuan). Ultimately, when plants are returned to the wild, they would represent the widest genetic complement that is possible. UBC Botanical Garden is proud to be a collaborator in this important initiative.