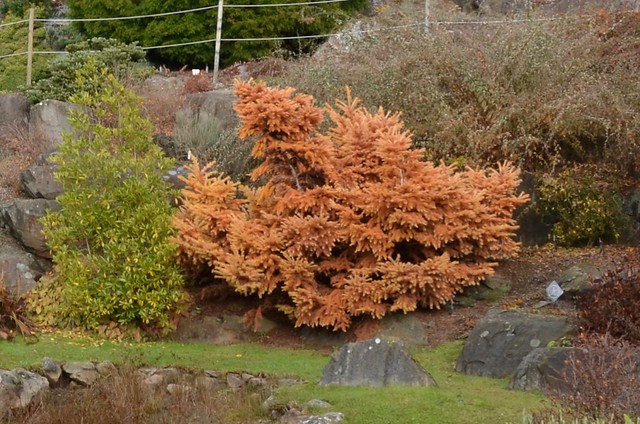 In the Botanical Garden, we look forward to the remarkable autumn colours of maples, sweet gums and tupelos to light up the shortening days. But not all deciduous trees produce vibrant autumn colour. For example, many European trees are described as having, at best, biscuit-coloured leaves in the autumn. I suppose it’s unreasonable to expect all deciduous trees to have brightly coloured leaves.

Let us consider the deciduous conifers. The thought of yellowing then browning needles would not normally elicit the kind of rapturous ooo-ing” and “ahhh-ing reserved for brilliantly-colouring maples; yet in nature, beauty is often found where we might not expect it, and in these plants the golds, browns and rusts are often indeed striking, if not occasionally sublime. Two families of conifers include deciduous species and each is distinctive. The pine family, which is characterized by species with long, needle-like or flattened, linear leaves, includes two genera of deciduous conifers: Larix (larch) and Pseudolarix (golden larch). The cypress family, on the other hand, includes deciduous trees with leaves that range from tiny and scale-like to flattened and linear. Metasequoia (dawn redwood), Taxodium (bald cypress) and Glyptostrobus (Chinese water pine) are all deciduous cypress relatives.

The majority of larches are admittedly dull at a sea-level, maritime climate like ours. These plants come into their own in subalpine and boreal environments where even russeted yellows become electrified, and some trees are magnificent in their cragginess with or without needles. But Japanese larch, Larix kaempferi stands apart for its broad, symmetrical crown and the beauty of its dense, soft, blue-green needles that turn golden brown in autumn. There is a very large specimen in the Asian Garden north of Fang Trail, but it is unfortunately mostly blocked from view from inside the Asian Garden. It is easily seen when driving along Southwest Marine Drive (but please watch the road), or looking southwest across Southwest Marine from the main pathway in the Garry Oak Meadow and Woodland Garden. An exceptionally attractive, slow-growing, densely branched, spreading cultivar with blue-green needles, L. kaempferi ‘Blue Dwarf’, graces the back of the pond in the Asian Woodland portion of the E. H. Lohbrunner Alpine Garden. The golden larch, Pseudolarix amabilis, is noted for its green-turning-golden, flattened needles, which are borne in attractive whorls around the stem tips, but also for its conical habit and scaly bark, and the adorable artichoke-like cones that appear in the upper branches of mature specimens. Compared with most larches, the branches of the golden larch are stiffer and the architecture is more symmetrical. Our plants are still too young to produce cones, but they are still attractive. There is a 3-m tall specimen adjacent to the boardwalk at the Garden entrance and a smaller, wild-collected seedling near the corner of Stearn Trail and Lower Asian Way.

Our most common deciduous conifer is Metasequoia glyptostroboides, the dawn redwood. There are two main groups of specimens: one visible from the boardwalk looking southwest, and the other in Gray Grove at the edge of the Carolinian Forest Garden. Living Metasequoia were first described from plants growing outside the village of Modaoxi, Sichuan in the late 1940s. The species was dubbed a “living fossil” by media reports of the day, and given the name “dawn redwood” by the San Francisco Chronicle reporter who went to China to report on its discovery. The fossil record shows Metasequoia inhabiting riparian sites during the Miocene (23 to 5 million years ago) throughout the Northern Hemisphere, including what is now called British Columbia. This is not quite recent enough to consider dawn redwood a native plant, but it grows well here, nevertheless. The leaves of M. glyptostroboidesare linear and flattened, borne in flat, feather-like arrays. They are bright grass green before they turn rusty brown in autumn. One of the most distinctive features of this species—besides the buttressed roots and fluted trunk—is the presence of stringy, sparsely-leafy stems that bear the pollen-producing cones. These hang elegantly and eventually leafless at the tips of the branches through the winter, until pollen release in early spring.

Bald cypresses are the American equivalent of dawn redwood; however there are several characteristics that set these apart. Whereas Metasequoiaare tall, narrow trees with a usually pointed crown and armpit-like depressions on the main stem below each of the lateral branches, the bald cypresses are mostly round-headed trees. with relatively smooth trunks. In leaf, the two genera are easily distinguished, as the American species have finer textured leaves. Like Metasequoia, Taxodiumproduce rusty brown fall foliage and overwintering pollen-cones on tassel-like strings. The most extraordinary features of the two are related to their ability to remain standing during severe wind-storms in their respective regions (typhoons in Southeast Asia and hurricanes in southeastern North America). For Metasequoia, the adaptation is massive flange-like buttresses that develop where the stem and roots meet. With bald cypresses, the adaptation is knee-like extensions of the roots (“cypress knees”) that appear above ground around maturing trees. In the Carolinian Forest Garden look for Taxodium distichum var. distichum (bald cypress) in the Bannister and Michaud Groves. The distinctive scaly (not feathery) leaves of T. distichum var. imbricarium  (pond cypress) set it apart from other taxodiums. A fine example can be found in the Fraser Grove.

Perhaps the most unusual conifer in the garden is our specimen of the rarely cultivated (and endangered in the wild) Chinese water pine, Glyptostrobus pensilis. Often described as deciduous, G. pensilistrees are more accurately described as semi-deciduous, as they only lose a portion of their foliage in most winters. The species is known to grow to about 30 m (100 ft) and is an important timber tree, the wood being resinous, straight grained and soft, but rot- and insect-resistant. Much like its deciduous North American and Chinese cousins, Chinese water pine is adapted to growing in permanently or seasonally wet soils, even evidently tolerating permanently knee-deep water. In leaf, the species resembles a mash-up of the two mentioned Taxodiumsubspecies (i.e., some leaves feather-like and some scaly). Glyptostrobuswas traditionally cultivated at the edges of rice paddies in southern China and adjacent Indochina and was probably grown in this way since paddy culture first began. A single G. pensilis specimen was planted in 1970 in the Asian Garden on Henry Trail east of Upper Asian Way, and it is now a sizeable tree with twisted branches.