Most visitors know that UBC Botanical Garden has an excellent collection of rhododendrons. But few know that there are more than a few species that regularly flower in early spring. One year in March (I think it was 2008) I counted thirty-eight species in flower. As mentioned in my February entry, both forms of Rhododendron ririei (on opposite sides of Farges Trail in the Asian Garden) will be show-stoppers this year. In particular, the more tree-like, lavender-pink-flowered, white-leaf-back version of  R. ririei has never had more flowers. This particular accession consists of four plants and is one of the oldest acquisitions in the garden. They all derive from cuttings we received in 1964 from Caerhays Castle in Cornwall.

After R. ririei, R. praevernum is among the earliest of the larger rhododendrons to flower in this area (Latin: prae = before + vernum = spring). Its long, drooping leaves are the perfect foil for its big, raspberry-blotched, pink-budded white flowers. Our plant is about 3m tall and across and sits next to Lower Asian Way between Beer and Decaisne Trails.

Continuing south along Lower Asian Way, just past Stearn Trail is an early flowering form of R. strigillosum, a species noted for its sizeable crimson blooms. But have another look at the leaves of this plant. This rhododendron has beautiful, long, narrow, down-curved, deep green leaves with an impressed mid-rib and leaf stalks bristling with long, stiff hairs. 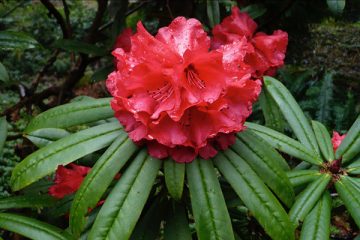 Every year, a number of accessions of the lance-leafed, yellow-flowered R. lutescens bloom in the David C. Lam Asian Garden. The different accessions display much of the range of flower size and colour, time of flowering (February to April), leaf shape and cold hardiness that is inherent in this species, but in all cases, the wide open creamy- to cadmium-yellow flowers with their spidery stamens are the perfect complement to the elegant leaves and willowy stems. Look for planting on Kingdon Ward Way and to the west on Lower Asian Way. 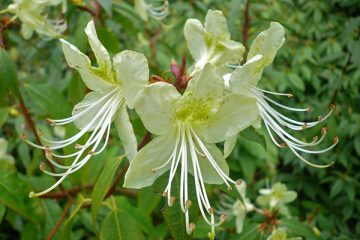 Last, but certainly not least is the magnificent R. principis (the name means “of first place”), which is located west of where Upper Asian Way and Henry Trail meet. Rhododendron principis famously produces perfect glossy green leaves that are pointed at both ends and have a covering on the leaf-back that resembles a thin layer of marshmallow foam. Not only are the leaves extraordinary, but the flowers are also beautifully coloured and exquisitely formed. They are pink in bud, but once open, the flowers become white, except for for the petal edges where remnants of the pink collect then gradually diffuse away.

Additional photos can be found on our Forums.

By Garden Communications on February 28, 2017