February 2017 in the Garden

Writing a blog about plants weeks ahead of when I anticipate them to be at their most interesting is always a bit risky. This is especially true when a sudden drop or rise in temperature can mean the difference between flowers buds and dead flowers. And we all know that weather forecasts more than a couple of weeks out are problematic…however, there are several plants that I can confidently recommend for a February visit.

I’ve written about the highly fragrant Chinese species Chimonanthus praecox (winter sweet) on numerous occasions, and I would be remiss to neglect it here. Curiously, our winter sweet plants in the Winter Garden have really taken off after many years of stodgy growth. Both are now more than 4 m tall and are covered in blooms. One is a normal-looking seedling and the other is the pale-flowered C. praecox ‘Luteus’. Near to them is a huge, mounding Camellia sasanqua ‘Setsugekka’, which never fails to pump out its pure white, semi-double flowers throughout the winter. When temperatures are unfavourable, as they were in December and January, the already-opened flowers get burned, but there are enough unopened buds to restart the show once the weather improves.

‘Whitcomb’ is a selection of the Higan (spring) cherry that blooms with vivid mauve-pink flowers. It was selected by Seattle gardener David Whitcomb (1879-1966) for its more robust growth and deeper-coloured flowers than is typical for the species. ‘Whitcomb’ is one of a group of trees in the Wharton Cherry Grove, adjacent to the Garden’s main parking lot. Judging from its flower buds, which were already showing colour in early January, ‘Whitcomb’ could open its flowers at any time. While February might be considered on the early side for ‘Whitcomb’, February is definitely late for rhododendrons like R. rirei, which typically starts to flower around the winter solstice or in early January. This year appears to be a banner one for flowering in R. rirei, but it will be a February phenomenon. 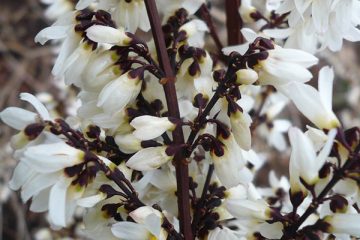 Given a mild winter (which this most definitely is not), Hamamelis mollis (Chinese witch hazel) and various Sarcococca species are also often in flower at the turn of the year, but this year, February will be the time for them. There are sarcococcas and witch hazels in the winter garden and in the David C. Lam Asian Garden (just follow your nose), and an extensive planting of S. hookeriana var. humilis (Christmas box) in the Contemporary Garden very close to a wonderful display of Abeliophyllum distichum (white forsythia). Although related, Abeliophyllum has little in common with Forsythia. Look for purple-brown stems to about 75 cm tall, covered in dark buds that open to white-petaled, sweetly fragrant flowers. The open flowers are unfortunately quite susceptible to frost, but if the timing is right the flowers can be sublimely beautiful. Finally, there are several spring-flowering bulbs that are good February performers. Without much trouble you’ll find several miniature daffodils, including Narcissus ‘Sir Cedric Morris’ and N. asturiensis in the European section of the Alpine Garden, and drifts of the pale-blue-and-yellow-spotted flowers of the diminutive Iris ‘Katharine Hodgkin’ in Asia Minor. I won’t predict what else will be in flower in the Garden, but I can guarantee it’s always worth exploring to see for yourself.

Additional photos may be found in our Forums.