June is high season for herbaceous perennials at the Botanical Garden. There are half a dozen areas around the garden where herbaceous displays are prominent, but in terms of sheer real estate, the Asian Garden’s herbaceous collection overshadows all the rest. Foremost among the summer-blooming herbs are the rodgersias. A genus of five herbaceous perennial species native to Asia from the Himalayas to East Asia, Rodgersia species are noted for their bold shade-tolerant foliage and large, showy inflorescences composed of small petalless flowers with persistent sepals. Like the smaller, fernier Astilbe, rodgersias are colony-forming, shade-tolerant summer bloomers that revel in rich, moist soil. Rodgersias are planted throughout the Asian Garden. 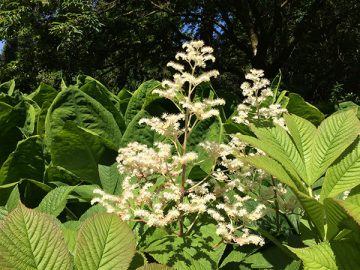 The robust Rodgersia podophylla (duck-foot rodgersia) covers large areas by means of its creeping rhizomes. Each wedge-shaped leaflet has three to five jagged drip-tips, the overall appearance resembling a (giant) duck’s foot. Two distinct colour forms are present in the Asian Garden: bronze (represented primarily by the cultivar ‘Rotlaub’) and green, though the bronze ones gradually turn green by summer. Small, star-like white flowers are amply borne on tall, leaning panicles, and the ovaries and sepals age to green. The species hails from Japan and Korea. The similar R. aesculifolia (chestnut rodgersia) from China has leaves of a more quilted texture and the leaflet margins are serrated, not lobed at the tips. They look uncannily like those of the horse chestnut tree (Aesculus hippocastanum), though the petioles (leaf stalks) are often nearly a metre in length. Flowers can be white or pink. In the Asian Garden there are several hybrids of the two species, as well as hybrids of both with the next species. Rodgersia pinnata (finger-leaf rodgersia) is a beautiful species with heavily textured leaves—some, such as var. superba emerge bronze-purple in spring—and tall, loose inflorescences of white, yellow or rose pink flowers. The similar, but smaller, R. sambucifolia (elderberry rodgersia), has pinnate leaves and flat-topped panicles of white or pink flowers.

More pictures of June in the Garden can be found on our Forums.