In the Entrance Plaza outside of the Shop in the Garden sits a small, sparsely branched deciduous tree with showy, summer-borne, lavender-pink flowers. The tree is known as a chitalpa and there is another, smaller specimen near the Roseline Sturdy Amphitheatre, but it is otherwise a rare tree around Vancouver.

Deconstructing the rather daunting scientific name, ×Chitalpa tashkentensis is revealing. The multiplication sign preceding the name denotes that a chitalpa is a bi-generic hybrid—that is, a hybrid derived from species belonging to two different genera. In this case, the two genera are from the Bignoniaceae (trumpet flower family): Chilopsis (desert willow) and Catalpa. The original hybridizations were performed at the Uzbek Academy of Sciences Botanical Garden in Tashkent, in the Republic of Uzbekistan (in the former USSR) in 1964. The resultant seedlings were subsequently named at Rancho Santa Anna Botanical Garden in California in 1991. Our plants are both referable to the cultivar ‘Pink Dawn’, the more common of the two hybrids. The other cultivar, ‘Morning Cloud’, is not cultivated locally. 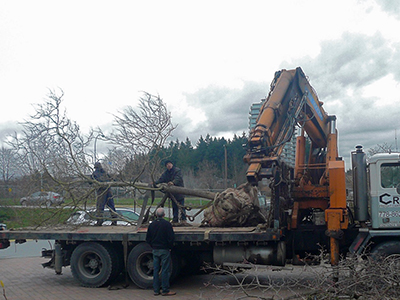 In 2013, a local Vancouver family donated the tree that now grows beside the Shop. It had originally been planted between two houses where it had grown into a beautiful small tree. There was some question of whether the tree would survive transplantation at all—the number and size of the roots cut to be able to extract it out of its original site was pretty extensive—but to everyone’s delight the tree settled in admirably. It has improved with every year in the Botanical Garden and 2016 is set to be its best flowering year yet. Its flowers will open in early July, then again in September. Bees, butterflies and hummingbirds are all attracted to the nectar-rich flowers, and it has been a wonderful addition to UBC Botanical Garden.

More photos of July in the Garden can be found on our Forums.