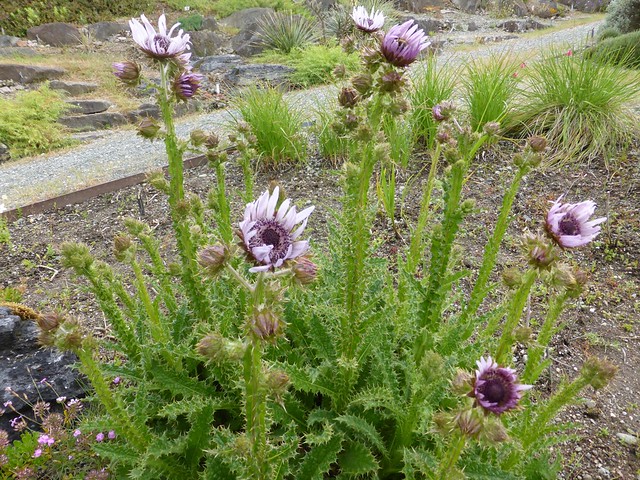 While June can be a rainy month, the weather is seldom chilly, and overcast conditions are great for intensifying colours. Of course, sunny days need no extra promotion. As you traverse into the garden, check out the pond at the entrance, the edge of which along Lower Asian Way has been renovated to create more open space. Note that there is now a traditional Japanese lantern in the pond—a gift from Sayward-resident, Peter Rambo. The lantern placement was by Ryo Sugiyama, Curator of Nitobe Memorial Garden, and Andy Hill, Curator of the David C. Lam Asian Garden, who physically made it happen. The pond is ringed with early summer perennials, which are at their best in June. Newly planted Iris ensata (Japanese water iris) join established Bistorta officinalis (bistort) and Rodgersia and Geranium (cranesbill) species in this attractive waterside display.

Roses are a favourite subject for gardeners and garden writers in June. At Upper Asian Way and Stearn Trail is a nice patch of Rosa x odorata ‘Mutabilis’ (butterfly rose). This is a very carefree rose (both pest and disease free) that flowers from now until frost. Remember to look up as you walk through the Asian Garden and you’ll see many interesting lianas (woody climbers). The beautiful Rosa filipes is a strong climber with masses of deliciously fragrant, white, cup-shaped flowers in each large cluster. The cultivar ‘Kiftsgate’, which was a seedling selection of R. filipes made at Kiftsgate Court, next door to the more famous garden Hidcote, in Gloucestershire, England, is represented in the garden by a huge specimen more than 20 m (66’) tall, on a grand fir on Siebold Trail at Forrest Trail. Another showy climber—not a liana, but a herbaceous climber—is located between Decaisne Trail and Wilson Trail near Upper Asian Way. This is a climber that doesn’t belong in the Asian Garden at all. Tropaeolum speciosum (Chilean flame vine) is a wonderful source of nectar for hummingbirds in its native Chile. Our plant originally came to the garden tucked into the roots of another Rosa filipes. Former Asian Garden curator, Peter Wharton, initially tried to remove it, but to no avail. The fact that our native hummingbirds rely on the tropaeolum’s scarlet blooms at a time when they are raising their tiny broods may explain Peter’s half-hearted efforts to remove it.

Through the tunnel and up the hill you’ll find a number of other gardens, including the Garry Oak Meadow and Woodland Garden, which can still boast a few blooms in June after the typical explosion of flowers in May. The western North American native mock orange, Philadelphus lewisii (a common shrub along the walk) produces small, white, four-petaled flowers in rounded clusters at this time. While not the showiest or most exuberant of mock oranges, its orange-blossom scent is surprisingly strong. Another large native deciduous shrub in this area is Holodiscus discolor (ocean spray) whose drooping, foamy clusters of creamy white flowers are a delight to the eye and especially to a huge range of pollinating insects. Look for even larger specimens of ocean spray in the BC Rainforest Garden.

A rarely cultivated plant in the Garry Oak area is Castilleja levisecta (golden paintbrush). There is a fine clump that flowers in early June near the top of the trail on the left. Castillejas are hummingbird-pollinated plants and spectacular in bloom, but difficult garden plants, not least because they are hemi-parasites. That is, they are photosynthetic (they can produce their own food in the usual way that plants do), but require a host plant upon which they first establish to draw nutrition,  before they can flourish in the landscape. Needless to say, the first few months in the nursery can be trying, as the seedling castilleja must be introduced to an appropriate host plant for infection to be successful.

The E.H. Lohbrunner Alpine Garden has the largest collection of different kinds of flowering plants in the Botanical Garden. Among the most colourful and arresting are located in the African section, and prominent here in June are Kniphofia (poker plants or torch lilies), the thistle-like Berkheya purpurea (purple berkheya), Lavandula pedunculata (butterfly lavender) and several Moraea species. Tulips (Tulipa species) are absent from southern Africa and moraeas, which are known as Cape tulips (after the Cape Province of South Africa), are actually iris relatives. Moraea alticola is worth a second look, even when out of flower, as the base of the plant is covered by an unusual net-like sheathing. Buddleja loricata (popcorn buddleja), with its rounded, billowing clusters of white flowers and grey-green evergreen leaves, is positively restrained in comparison. This buddleja provides a useful, calming foil for many of the more unusual and colourful African plants in this area. This is, of course, only a sampling of what’s in bloom in the Botanical Garden in June, and whether you come for the flowers or just for the escape, enjoy your time in the garden, rain or shine.