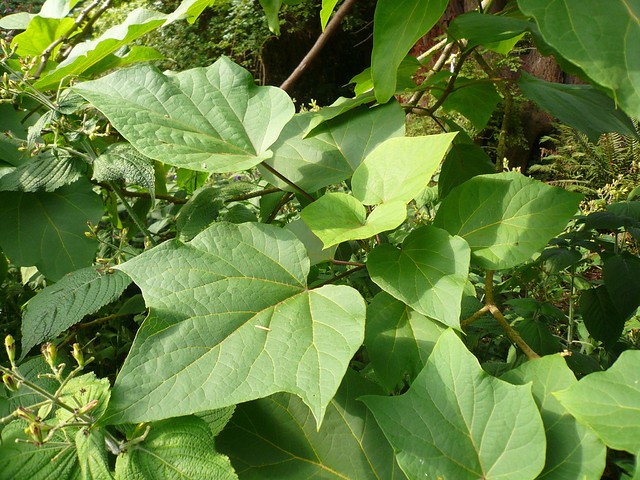 At the southwest corner of the Shop in the Garden, at the Botanical Garden entrance, is a sizable × Chitalpa tashkentensis ‘Pink Dawn’, which will be in glorious flower for much of the month of July. Chitalpas have bright green to greyish-green leaves that are usually pointed at both ends and typically held stiffly outward around the yellowish stems. Leaves are very slow to emerge in Vancouver, usually not appearing until well into June, and in hotter climates, the leaves fall golden yellow, but they are generally shed green here at UBC. Flowers are produced at the tips of the branches in summer, the individual flowers about 2 cm long, pale pink to lavender, the corolla with frilly-edged lobes around a broad, open tube that is lined with yellow-brown nectar guides. Flowers open in early July, then again in September. Bees, butterflies, and hummingbirds are all attracted to the nectar-rich flowers.

The name × Chitalpa may be strange to some, and certainly, most people are unfamiliar with the multiplication sign preceding a genus name, designating that the plant is a bi-generic hybrid. Note that when the multiplication sign is placed between the genus name and the specific epithet, it denotes an interspecific hybrid (a hybrid between two species of the same genus). For example, Catalpa × galleana is a cross between the American C. speciosa (western catalpa) and the Asian C. ovata (yellow catalpa). This is a relatively common occurrence in horticulture—closely related species being easier to hybridize than species from different genera. Examples of C. speciosa can be found in the Carolinian Forest Garden in both the Fraser and Clayton Groves, and C. ovata can be seen in the David C. Lam Asian Garden on Upper Asian Way just west of Stearn Trail.

× Chitalpa is one of only a small number of bi-generic hybrids in commercial horticulture. × Chitalpa tashkentensis is the result of hybrid crosses using species from the southwestern American Chilopsis (desert willow) and eastern North American and East Asian Catalpa. Both Chilopsis and Catalpa are members of the trumpet flower family (Bignoniaceae) and close relatives, but not so closely related that hybridizing them would be a slam dunk. The original hybridizations were performed by F. N. Rusanov at the Uzbek Academy of Sciences Botanical Garden in Tashkent, in the Republic of Uzbekistan (in the former USSR) in 1964. The offspring were subsequently named at Rancho Santa Anna Botanical Garden in California in 1991. ‘Morning Cloud’ (Chilopsis linearis × Catalpa speciosa) is an upright tree with white to pale pink flowers. The more commonly cultivated ‘Pink Dawn’ (Chilopsis linearis × Catalpa × galleana has deeper lavender pink flowers. A second, younger ‘Pink Dawn’ is located at the entrance to the Sanctuary Garden (above the Roseline Sturdy Amphitheatre).