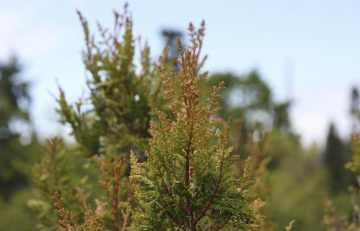 Happy New Year! Following December’s discussion of Australasian conifers, as promised this blog post is devoted to South American ones. For the most part, these species and their Australasian counterparts are not as cold-hardy as many of the familiar conifers we grow in gardens or those that are locally wild. Ours are all native to the southern Andes Mountains, constituents of the Valdivian temperate rainforests and the Magellanic subpolar forests. A good number are well-suited to the Botanical Garden, and to Vancouver more generally. The monkey puzzle, Araucaria araucana, one of most easily recognized of all temperate trees, is undoubtedly the most famous and appropriate example. People love the exotic aura and extraordinary radial symmetry that monkey puzzles display. Laura Caddy, the Alpine Garden’s Curator-Horticulturist has planted a wee pair (more to come) at the top of the South American Section in hopes that they will provide a welcome screen for the impending stadium development. As young plants they have yet to develop the symmetry so characteristic of older specimens, and while they seem to barely increase in size from year to year, they are putting down roots, which will stand them in good stead when they start to take off. Close to the monkey puzzles, on the same slope are three cypress relatives. If the reader is wondering whether we are trying to create a forest in the Alpine Garden, worry not; in Vancouver the three species are all much slower growing than A. araucana.

Fitzroya cupressoides (Patagonian cypress) is the largest and longest-lived of all the Andean conifers. Morphologically (shape and size-wise), the trees are a little like Sierra redwoods (Sequoiadendron giganteum), though never so tall or massive. The Patagonian cypress’s value as a timber tree to European settlers led to rampant overcutting across its range, which ultimately resulted in a total ban on logging in 1976. The species is considered endangered in the wild.

Perhaps the South American conifer with the most familiar-looking foliage is Austrocedrus chilensis (Chilean incense cedar). This tree bears flattened sprays of scale-like leaves in the manner of some false cypress (Chamaecyparis) species, and cones that are nearly identical to those of the Californian incense cedar (Calocedrus decurrens). Despite the name (Austrocedrus means southern cedar), this species has the northernmost range of all the Andean cypress relatives and is thus not quite as cold hardy as the others. The Chilean incense cedar, too, is threatened by logging, but also by imported root diseases. Ours seems healthy enough, but now that it’s reached about 2.5 m in height (probably the height of the cold winds coming over the stadium fence), all of its energy seems to be diverted to adding to its already substantial girth.

The Guaitecas cypress, Pilgerodendron uviferum (syn. Libocedrus uviferum) was similarly imperilled by excessive logging and is now protected. This conifer looks rather like a very narrow, upright juniper, especially from a distance. Guaitecas cypress has the distinction of being the southernmost conifer in the world, a title it shares with the Chilean rimu (Lepidothamnus fonkii), a diminutive, mat-forming coniferous shrub whose closest relative is the New Zealand pygmy pine (L. laxifolius—see the December 2022 blog). Despite its famous hardiness, our Pilgerodendron, which is tucked in below the Austrocedrus, is derived from a wild seed collection in the northern (i.e., warmer) part of the range. It continues to show damage from sub-freezing weather.

Podocarps (members of Podocarpaceae, the plum yew family) also number three in the South American Section, and these are all native to forests far to the north of the cold Magellanic subpolar region. Saxegothaea conspicua (Prince Albert’s yew) is currently our tallest south American conifer (the monkey puzzles will push past them in a few years). True to its common name, S. conspicua is yew-like in appearance—if somewhat more open branched and upright. Its cones, however, are unlike those of other podocarps (they look like miniature globe artichokes). Podocarpus salignus (willowleaf podocarp) is close by, near the top of the slope. As a recent transplant, this famously (potentially) elegant species suffered quite a bit from the extremes of the past couple of years (the 2021 heat dome, then brutally cold temperatures and winds last winter). In spite of the hardships, the plant appears to be establishing well, with the newest growth looking healthy and strong. In a warmer climate, it is ultimately a tree with a dome-shaped crown that can reach 20 m tall. The yew-like Prumnopitys andina (Chilean plum yew), must surely take the prize as our most robust South American conifer. Like Podocarpus, Prumnopitys is a genus that spans both South America and Australasia; however, the Chilean plum yew is the only Prumnopitys species cold hardy locally. And cold-hardy it is, despite being native to habitats where temperatures rarely fall below freezing. Our plant has survived—indeed thrived— without any visible damage, since it was planted out in 2003. 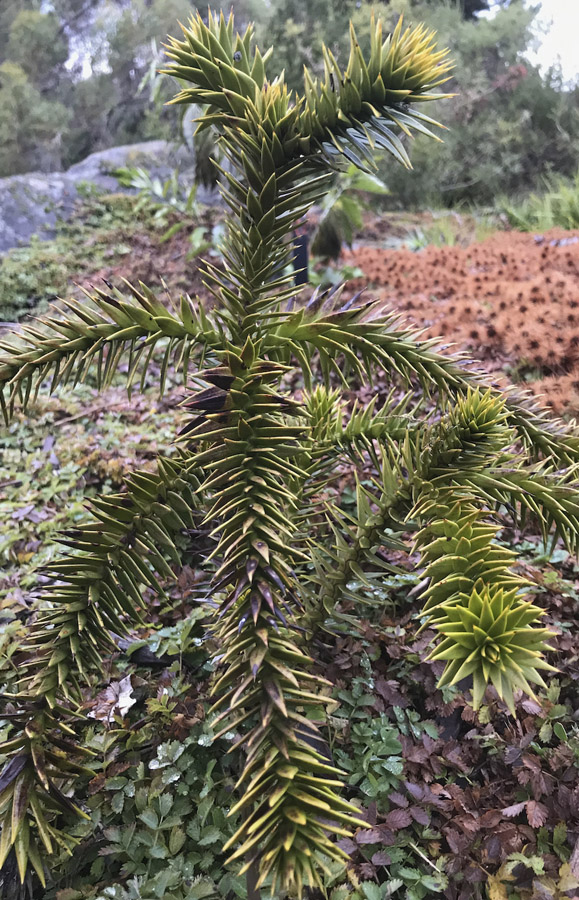 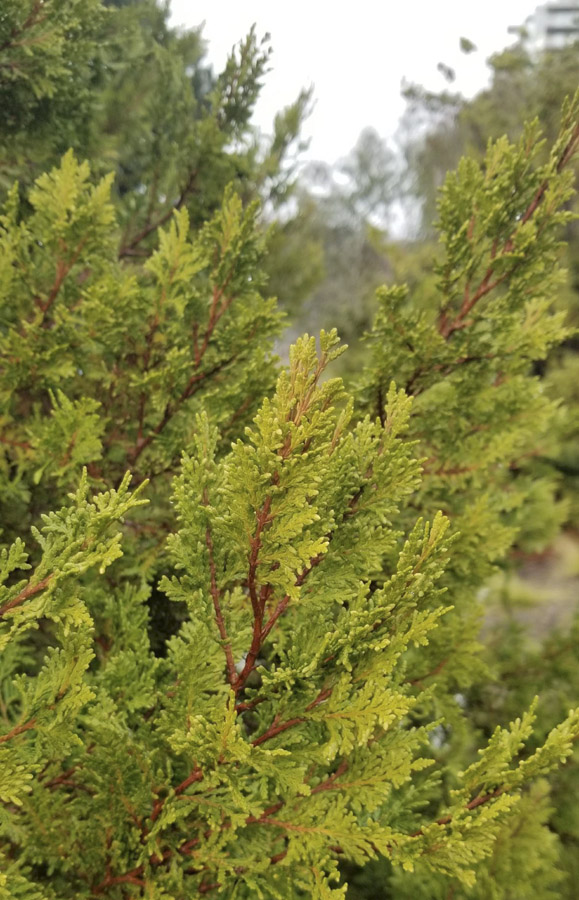 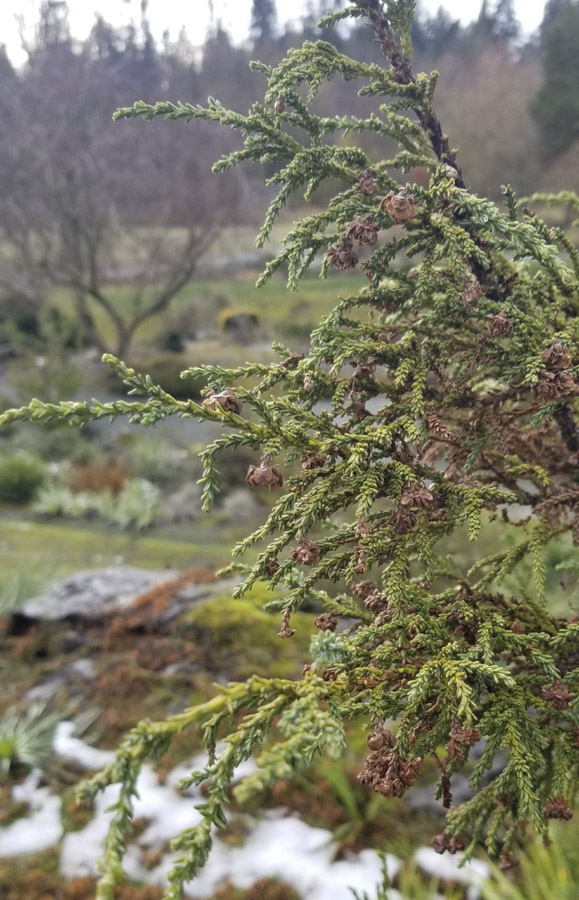 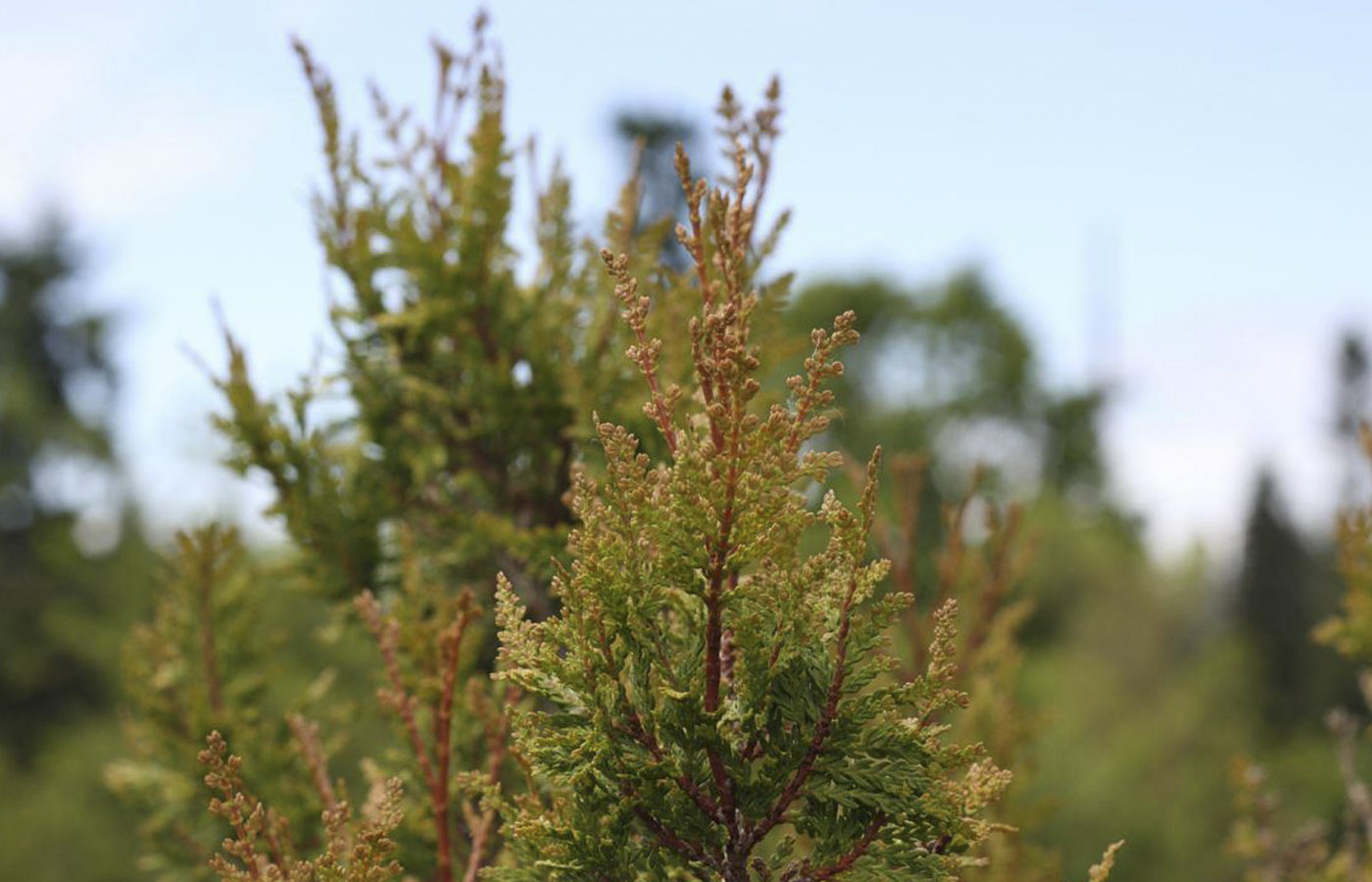 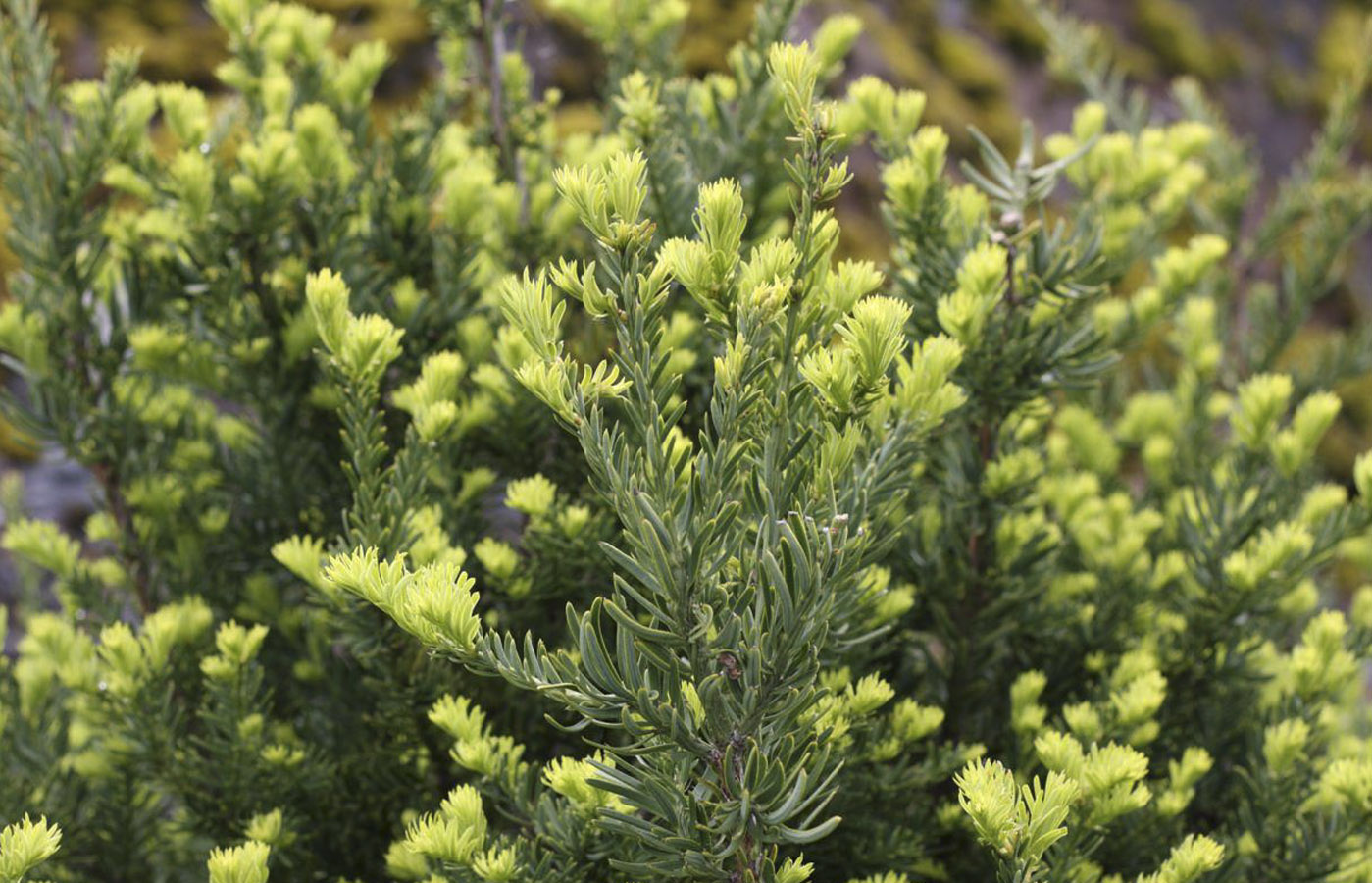 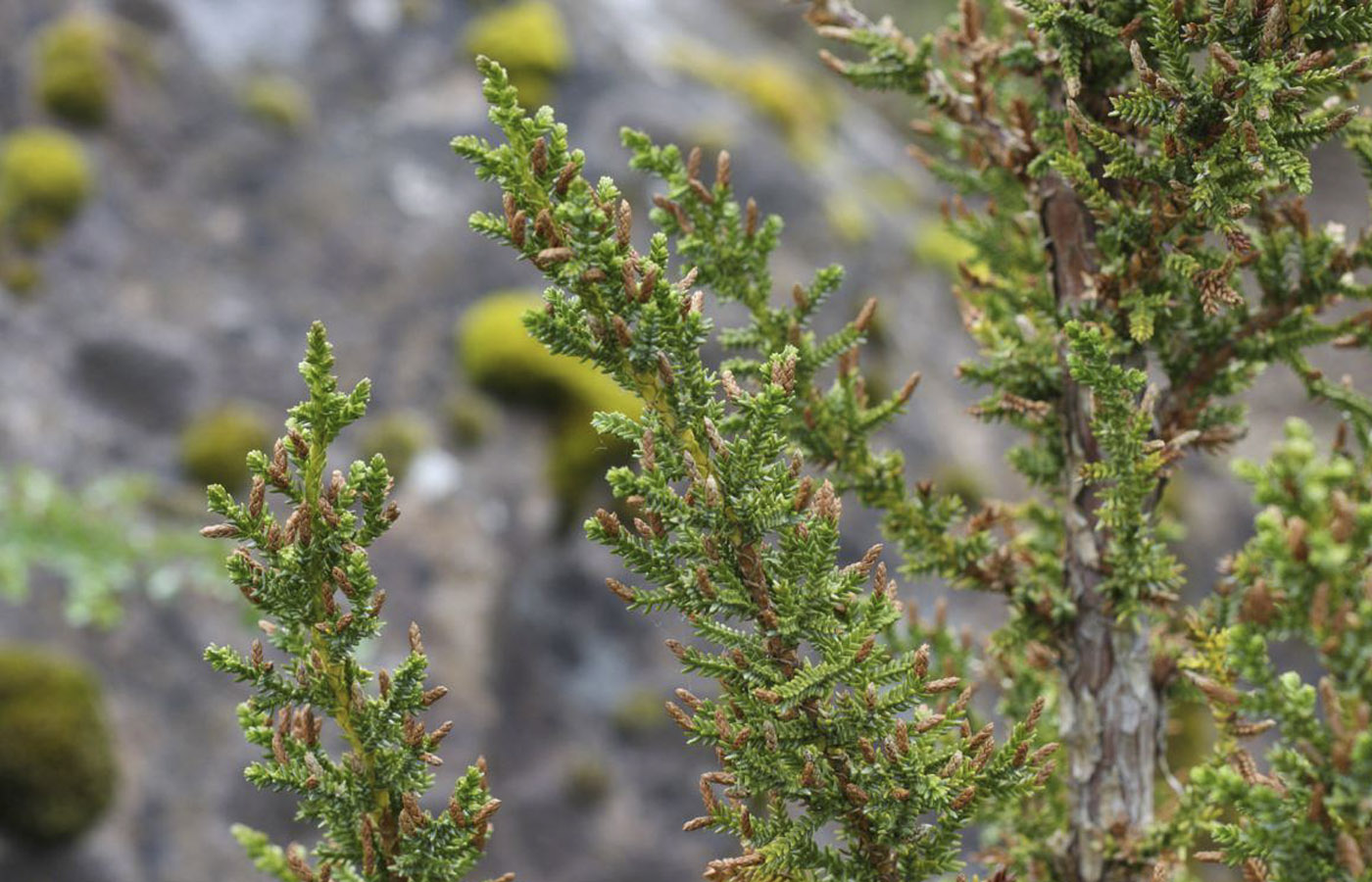 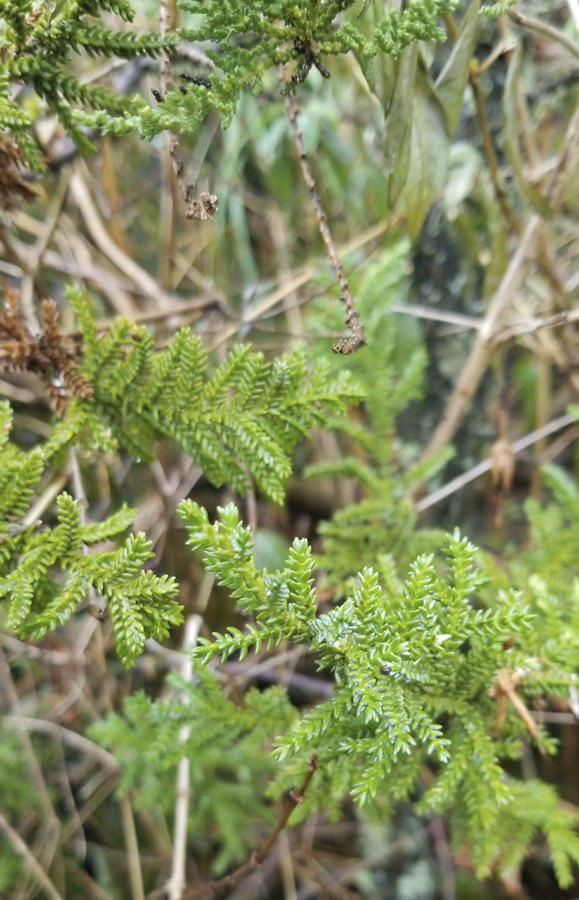 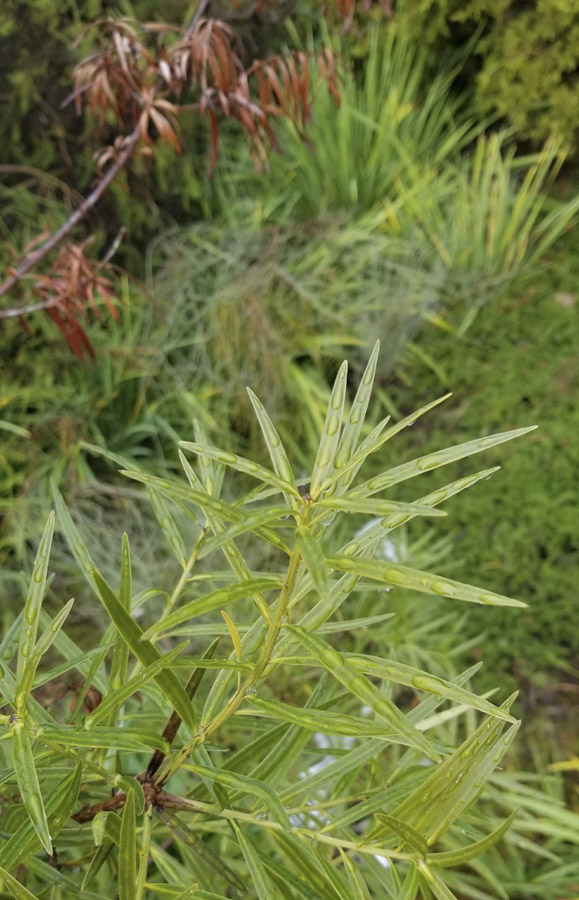 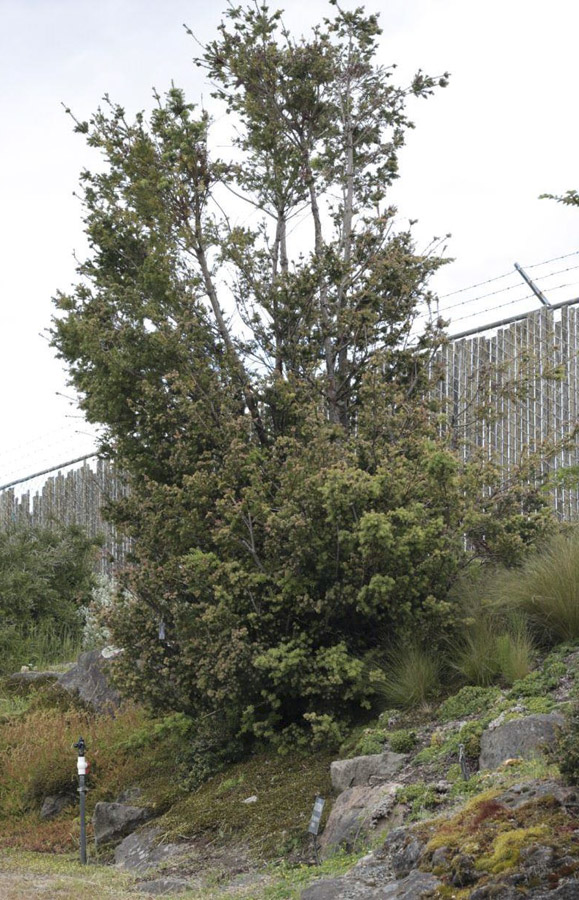 By Garden Communications on January 3, 2023