» Home » How the Garden began

How the Garden began

The establishment of UBC Botanical Garden began 100 years ago with a truck on a bad road and a hardy few. 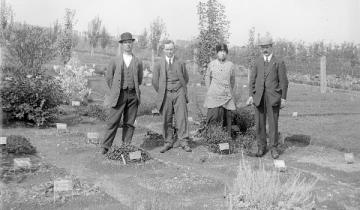 The Original Botanical Office staff at botanical garden, circa 1913-1915

In 1916, the closure of the Office of the Provincial Botanist led to the relocation of thousands of plants and shrubs. John Davidson, BC’s first provincial botanist and director of the Garden, Mary Jane Gruchy, I. Van der Bom, and James A. Wattie hauled thousands of plants and shrubs on a 40-kilometre trip from the original Essondale location of the botanical garden in a truck on rough roads to UBC’s Point Grey campus. At the time, the Point Grey campus only had three buildings, with classes taking place in the Fairview neighbourhood where Vancouver General Hospital now stands. From his office on Pender Street in Vancouver, Davidson began his work.

Davidson faced many obstacles in creating the botanical space that we now know as the spectacular UBC Botanical Garden. Crafty crows flew off with his tally sheets and gardeners who were only interested in showy plants often weeded out less spectacular botanical specimens to Davidson’s dismay.

Over the next few years, however, Davidson established a nursery, herbarium and systematic garden of native plants from BC.

The establishment of the Garden lived out John Davidson’s desire to represent the plants of British Columbia and celebrate the wealth of the province’s native flora.

“More can be seen in a few hours’ inspection than one can see in a week’s sojourn through the Province,” said Davidson at the time.

Davidson sent letters to schools across BC asking for their cooperation in collecting plant specimens essential to the establishment of the Garden. The contributions of school teachers and students were a critical and innovative effort in expanding the Garden’s native collections. In many ways, the Garden’s first collectors and explorers were the students and teachers of BC’s public school system.

The origins of the Garden encapsulate the old adage that it takes a village to raise a child. But, in this case a province to raise a garden.

One response to “How the Garden began”