February 2018 in the Garden

Rhododendrons are one of the joys of the David C. Lam Asian Garden in spring. Although primarily planted with wild species, the Asian Garden includes a number of hybrid selections. Some were planted inadvertently—we have several Rhododendron ‘Biskra’ that were originally planted as R. cinnabarinum, and a few ‘Bric-a-Brac’ that for more than a decade were mistakenly labelled R. moupinense, for example. Other hybrids were planted on purpose, such as R. ‘David Lam’ (for obvious reasons). Rhododendron ‘Cornubia’ fits into that category, as well. ‘Cornubia is a 1912-hybrid of R. arboreum and R. ‘Shilsonii’. Rhododendron arboreum is the famous tree rhododendron native to the Himalayas and the mountains of western China, Indochina, and Sri Lanka. Plants can grow to 40 m or more in height. The thick, leathery leaves are up to 20 cm long and the flowers are borne in rounded trusses of about twenty blooms. Most plants are frost tender in Vancouver and are not widely cultivated north of coastal California. 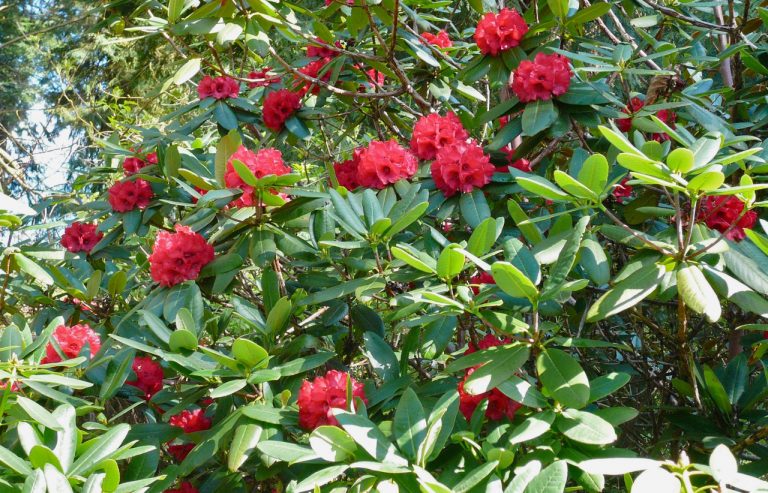 The ‘Shilsonii’ cross involves R. barbatum and R. thomsonii, both large, blood-red-flowered species with exquisitely exfoliating bark. As attractive as ‘Shilsonii’ is, the addition of R. arboreum genes, however, elevates ‘Cornubia’ to a definite “wow” category of rhododendrons. Plants form large, open-branched shrubs or small trees with beautiful, exfoliating bark that is pale and waxy as it ages, curling up to expose mahogany red under-bark. The lustrous, bright green leaves are broadly elliptic, with down-turned margins, and are up to about 15 cm long. Flowers are usually sparsely produced in Vancouver, and are usually limited to terminals just inside the outer crown, but this year the shrub looks to outdo itself with blooms. The flowers themselves are an intense, warm, lipstick red. Like R. barbatum, they usually open in late February early March, depending on the severity of winter temperatures, and like other early-flowering rhododendrons, flower stalk length and degree of flower opening in the inflorescence is temperature related. The cooler that temperatures remain, the squatter the truss and the more long lasting the flowers. ‘Cornubia’ is known to struggle after a series of cold winters in Vancouver; however, as the climate continues to warm, it is less likely to disappoint. This year will be a good indicator of what we can expect. Look for ‘Cornubia’ at the southwest corner of Meyer Glade.