December 2017 in the Garden 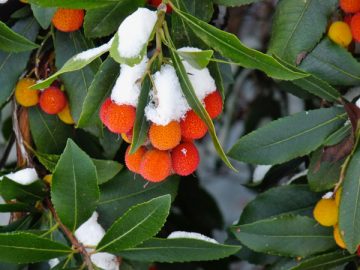 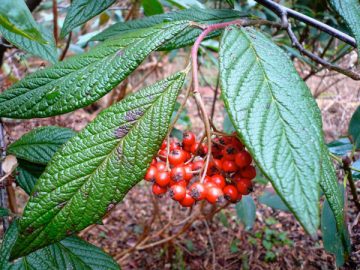 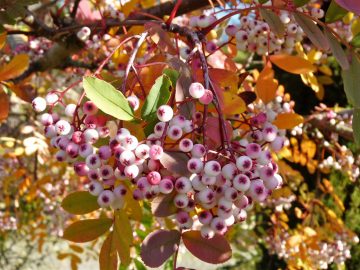 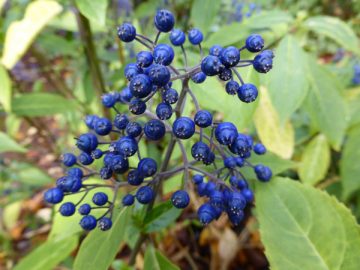 Despite the fact that there are still plenty of plants in flower in the Botanical Garden, December is really more a month for berries (please note that Viburnum × bodnantense, V. farreri, Camellia oleifera, C. sasanqua, Elaeagnus macrophylla, E. glabra and others will continue to pump out flowers barring hard frosts.) Interestingly, the berry crop is up for some plants and down for others. Our native snowberry, Symphoricarpos albus, is exceptional this year, and there are wild and planted snowberries throughout the Garden. Their spongy, bright white fruits are seemingly unattractive to the birds, at least until other berries in the vicinity are more or less exhausted. Many Sorbus (mountain ash) and Cotoneaster berries, too, are neglected by birds, at least until they soften. Before the new year, the berries of S. glabriuscula (white-fruited Hubei mountain ash) and S. pseudohupehensis (pink-fruited-mountain ash) are as hard as frozen peas. Both mountain ashes are small, round-headed trees with bluish-green leaves that turn yellow, orange or red in autumn and have cherry-red leaf and fruit stems, and both are well laden with fruit this year. You can find the pink one in the Winter Garden, where there are also numerous Euonymus (spindle tree) species, some of which are still showing their curious capsular fruits. The red or pink fruits open to expose seeds that have a bright orange, oil-rich coating that is irresistable to birds. Nearby there are also a few Crataegus (hawthorn) species, including a small C. ´ grignonensis (Grignon thorn) which has stubbornly persisting leaves and oversized red haws (the hawthorn fruit is correctly known as a haw, and the tree itself is the thorn). The Grignon thorn arose spontaneously (a seedling of C. mexicana) at the Arboretum de Grignon, France in 1873. The somewhat more conventionally deciduous C. viridis ‘Winter King’ takes pride of place in the Main Lawn. It has thousands of pretty, glossy red haws, and when we’re lucky enough to see the sun, they sparkle brilliantly.

There are several of the afore-mentioned white fruited mountain ashes in the David C. Lam Asian Garden. Two are self-sown seedling that grow out of the tops of old rotting stumps, where conditions for the establishment of mountain ash are ideal (seedlings do not survive the droughty conditions on the forest floor). Near one, close the corner of Siebold and Rock trails is a planting of the indigo-blue-fruited Hydrangea febrifuga (dichroa). I’ve written about these fascinating plants several times before, mentioning that Andy Hill, Curator of the Asian Garden, collected the seed of this surprising hardy group of seedlings on a collecting trip to Sichuan, China. Rose hips were also plentiful this year, and just to the west of the dichroas are several roses, including the magnificent Kiftsgate rose, which is a seedling of Rosa filipes that arose at Kiftsgate, next door to Hidcote Manor Garden in Gloucestershire, England. This year in June, ‘Kiftsgate’ was awash in its fragrant white flowers, and was subsequently weighed down in beautiful scarlet hips, but as I write, the birds are continuing to strip this 25-m-tall climber of its fruits. Other roses suffer a similar fate, as their hips, like the berries of Aronia (chokeberry), Callicarpa (beautyberry), Symplocos (sapphire berry) and Hippophae (sea buckthorn), which are all spectacular here in autumn, generally ripen before December. Many cotoneasters, on the other hand, are hard-fruited well into the winter. Three species in particular are worth looking for: Cotoneaster rhytidophyllus (leatherleaf cotoneaster) on Ludlow Trail (by the small bridge), C. frigidus ‘Cornubia’ in the Contemporary Garden (truly spectacular this year), and C. glabrescens (glossy cotoneaster) on Kingdon Ward Way at Lower Asian Way. All species are tallish, sprawling shrubs with willow-like evergreen leaves and scarlet fruit.

The large orange-red berries of Arbutus unedo (strawberry tree), which are an extraordinary texture, ripen in December, not long after the flowers for next year’s crop have finished (the fruits take a full year to ripen). There are several fruiting individuals around the European Woodland and Winter Garden and a specimen of the pink-flowered A. unedo ‘Rubra’ at the front entrance. While edible, it worth noting, however, that Pliny the Elder is said to have coined the name, unedo, which is Latin, and means “I eat one.” Last, I want to mention Nandina domestica (heavenly bamboo), which I have never seen in the Botanical Garden so resplendent with fruit. Although small, the pale vermillion-red berries are borne in tall, luxuriant panicles well above the foliage. Look for them in the Contemporary Garden (which is currently getting a much needed makeover) in the front entrance and by the patio to the west of the Reception Centre.