UBC Botanical Garden kicked off the celebrations of its centennial anniversary among the blooms of spring and heavy rain.

100 years ago, on a scrubby plot of land, UBC Botanical Garden was founded and began its growth into the spectacular celebration of biodiversity, plant research, and conservation it is today.

On March 11, 100 people gathered in the Garden’s Reception Centre overlooking the rain-soaked Salish Sea to celebrate the momentous occasion on the most Vancouver of days. Cutting through the gloom, a grand Magnolia Sprengeri brightened the grey sky with its spectacular bright pink flowers.

Staff, volunteers, students, and supporters of the Garden chatted excitedly over the displays that showcased the history and future of the Garden in photos, seed samples, and a huge pinecone. A TV screen showed an interactive timeline exploring the Garden’s rich history. 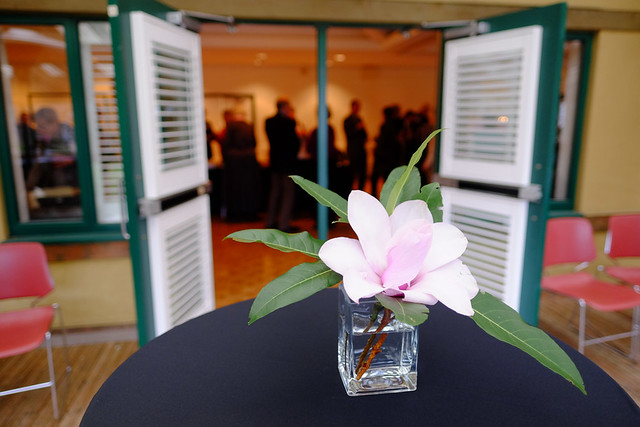 Reflecting on the achievements of the Garden, the Garden’s director Patrick Lewis remarked that UBC Botanical Garden is “our collective responsibility to steward for future generations.”

Lewis spoke about the Garden’s founding director, John Davidson, or ‘Botany John’ as he was known. Named BC’s first Provincial Botanist, Davidson founded the botanical garden on the Essondale hospital grounds in Coquitlam. However, after the closure of the Office of the Provincial Botanist in 1916, thousands of plants and shrubs were relocated along rough roads to UBC’s Point Grey campus.

UBC’s Dean of Science Simon Peacock also spoke at the event, remarking on how proud he was of the Garden and acknowledging all the people that make it possible.

“One only has to look outside the window to see why so many cherish the Garden.”