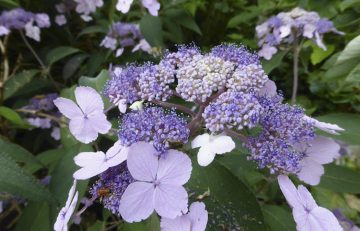 As I’ve related many times, UBC Botanical Garden has something for everyone at almost any season; August—high summer—is certainly no exception. The western edge of Point Grey where the Botanical Garden is located benefits greatly from ocean breezes in the summer. This localized phenomenon (the daytime “onshore” breeze, which is caused by the land heating faster than the ocean surface) prevents temperatures from rising as quickly or as high as areas further from the coast. We like to say that temperatures are always a few degrees cooler in the Garden than in the rest of Vancouver in summer.  We’re warmer in the winter, too, though the difference is not as profound as the summertime differential. Our moderate climate not only allows for a wide range of plants to be grown, but cooler summer conditions often prolong both flowering and the longevity of individual flowers.

Entering the David C. Lam Asian Garden, visitors will soon come upon a large patch of Inula racemosa ‘Sonnenspeer’ (sun spear), a giant of a herbaceous perennial. Although the stout stems are generously clothed in sizeable alternating leaves, the uppermost of which are small, it bears multitudinous ascending panicles of miniature sunflowers from August until late September. A little further along (on Upper Asian Way near Straley Trail, and along Stearn Trail) are clumps of Kirengeshoma palmata, a hydrangea relative known as Japanese wax bells, named for its curious butter yellow tubular flowers borne on wire-like stems. These top off 1.5-m-tall stacks of handsome, broad, paired leaves. Kirengeshoma palmata was pictured in the July in the Garden, but it really comes into its own in August. The other premature posting in the July blog was Rhododendron auriculatum. The lily-scented flowers of this Himalayan rhododendron are known to open any time between July and September, depending on springtime temperatures. With a late-arriving summer as we just experienced, flowering won’t begin before August. There are several large plants in the Asian Garden, including in areas bordering Wharton Glade to the south and west.

Hydrangeas are a big part of August’s charm in the Asian Garden, and there are plenty to admire. Arguably the loveliest is Hydrangea aspera Villosa Group (a.k.a. H. villosa) (in Wharton Glade), which opens its lilac-purple lacecap blooms at this time above narrow, pointed, downy-hairy leaves. The largest species in the garden, the Chinese tree hydrangea, Hydrangea heteromalla also has lacecap-type flowers, though they are entirely white. Our most impressive specimen is at Campbell and Stearn Trails. This floral arrangement is typical of most hydrangeas; that is, clusters of tiny fertile flowers surrounded by larger “flag” flowers (presumably, to better attract pollinators). Blooming normally in June and July, the flag flowers of H. heteromalla begin to burnish red in August, extending the season for another month or more. Another spectacular, though considerably smaller hydrangea is Hydrangea quercifolia, a species renowned for its oak-like, deeply lobed leaves and lush, conical flower clusters. Our most floriferous oakleaf hydrangeas are in the Carolinian Forest Garden at the western end of Fraser Grove. A somewhat more subtle North American species, Hydrangea radiata, is at the eastern end of the same grove. This attractive hydrangea has dull-green leaves and lovely, understated white lacecap flowers, but it’s striking, chalk-white leaf undersides quietly lift it into the realm of the exceptional.

In the area around the Roseline Sturdy Amphitheatre, horticulturist Tim Chipchar has been working to introduce a range of long-blooming herbaceous perennials. The unusual sunflower relative, Catananche caerulea, which is known as Cupid’s dart because of its employment in love potions of yore, produces a long sequence of gorgeous, bright blue daisies from chaffy bronze buds atop swaying, wire-like stalks. There is a small patch at the top of the hill above the amphitheatre’s William Pye water feature, “Hypanthium.” Salvia argentea (silver sage) produces sprays of white two-lipped flowers (close inspection reveals tiny purple hairs on the flower’s upper lip), though silver sage is more often noted for its spectacularly large, rumply, silver-hairy evergreen leaves. This species can be found next to the path in the bed with a view across to the European section of the E.H. Lohbrunner Alpine Garden. The Grecian foxglove, Digitalis laevigata subsp. laevigata  is located on the opposite side of the path. An unusual foxglove for its hairless stems and leaves (laevigata means polished, not rough), D. laevigata produces upright stems of golden-yellow flowers that do not open until mid-summer. A close look at the tubular flowers shows a white, tongue-like lower lip that folds down when the flowers are at anthesis (ready for pollinators). Salvia candelabrum is an evergreen subshrub that, like the majority of Salvia species, produces its flowers in the heat of summer at UBC. The candelabra sage distinguishes itself by its violet-purple flowers, produced in compact whorls (technically, false whorls as the flowers are actually borne in paired clusters) on tall stalks. The leaves look like those of the culinary sage (S. officinalis), but are considerably larger. Our plants are located roughly opposite the recently installed, Deborah Butterfield (horse) sculpture “Columbia.” Two hollyhocks should be visible in the same area. Alcea rugosa, the yellow, or rough-leaved hollyhock, produces masses of soft-yellow flowers on tall, upright stems, while the hemp-leaf hollyhock, or palm-leaf marshmallow, Althaea cannabina, churns out a near continuous supply of 2-cm-diameter pink flowers on slender green stalks. Hollyhocks of a more conventional nature—i.e., the common hollyhock, Alcea rosea—can be found elsewhere in the Garden, but especially at the Front Entrance gate, where the towering stalks of white-centred, cream, rose, pink, red or purple floral disks make a colourful summer welcome to the Garden. 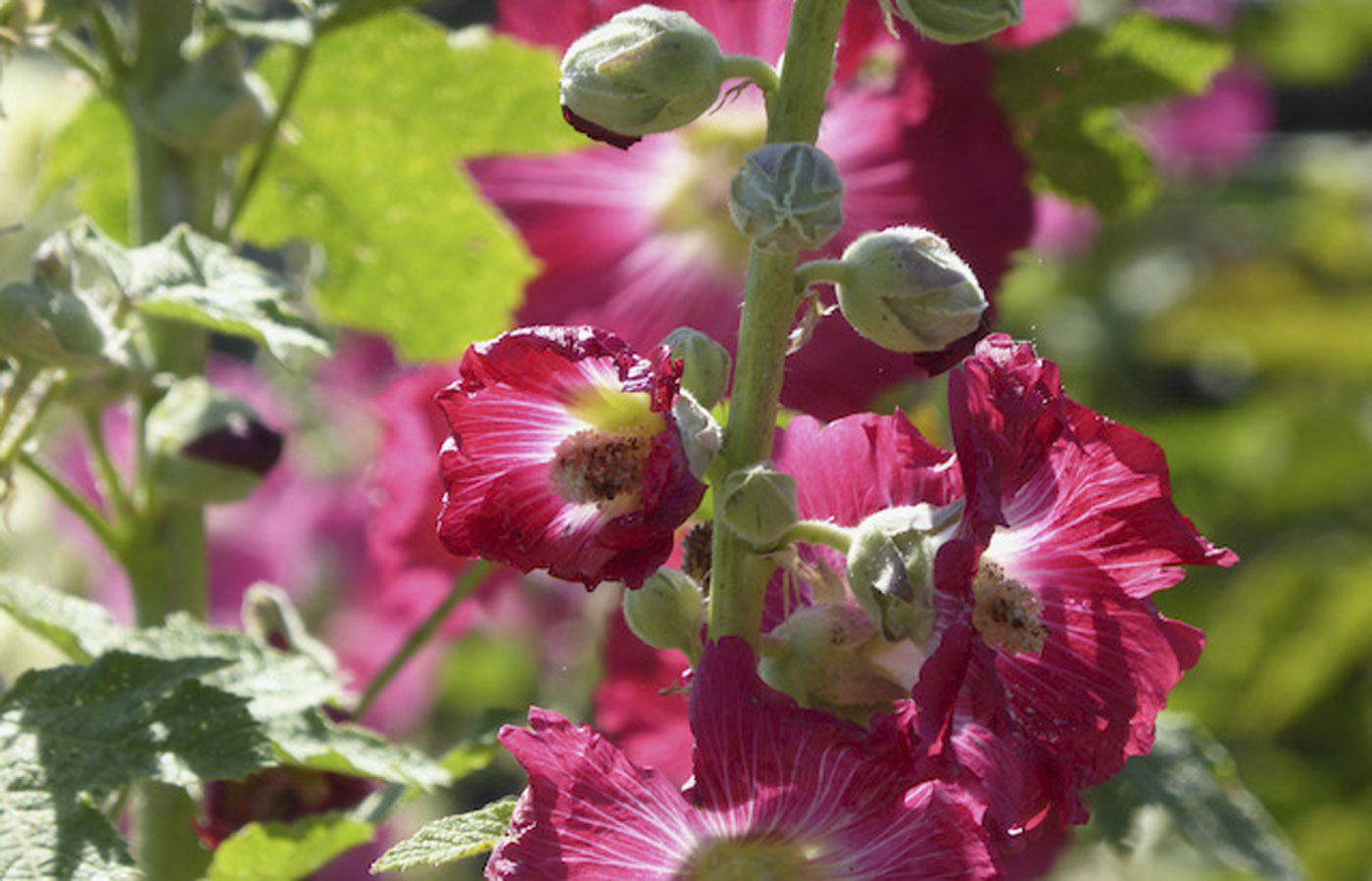 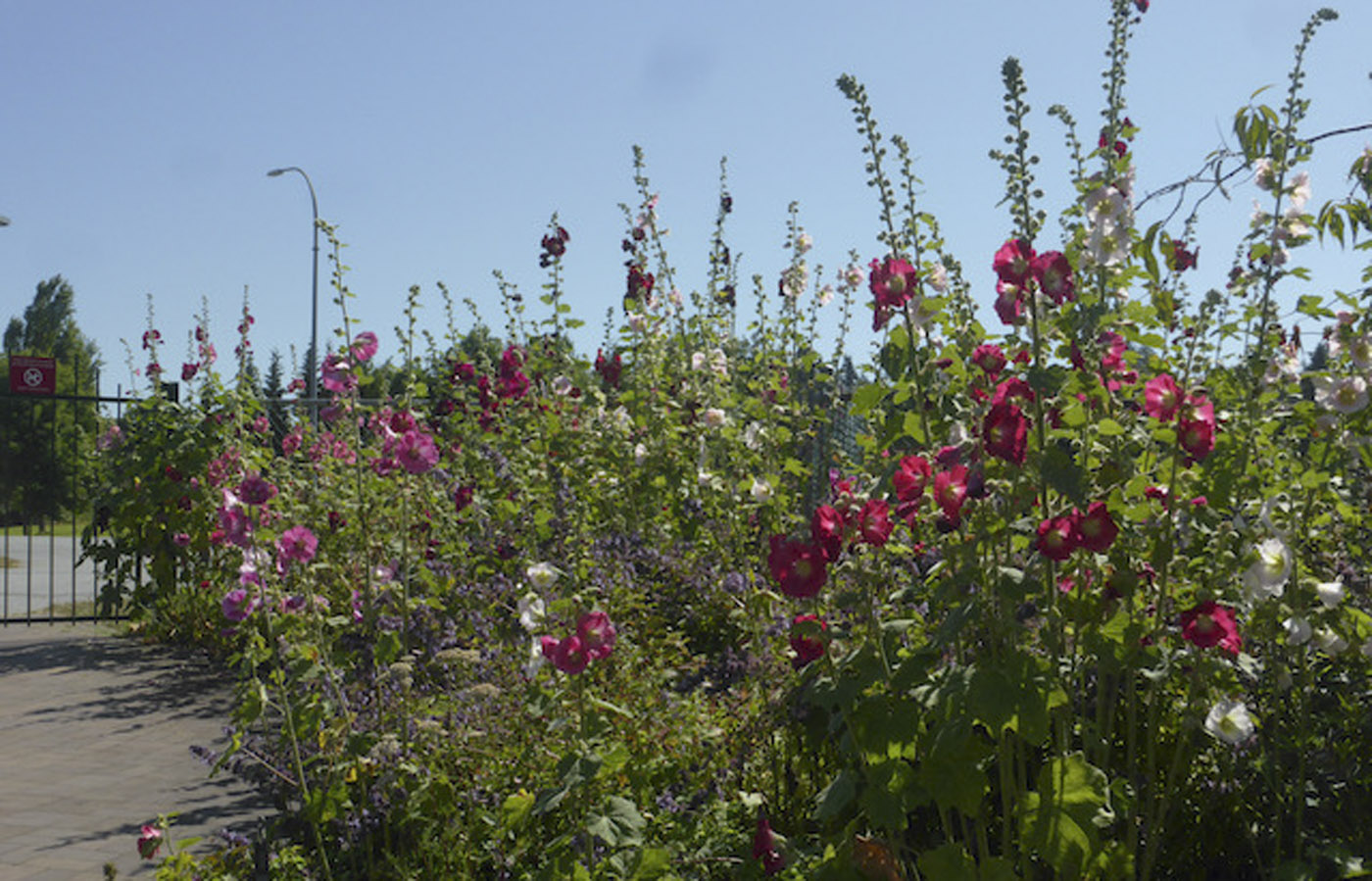 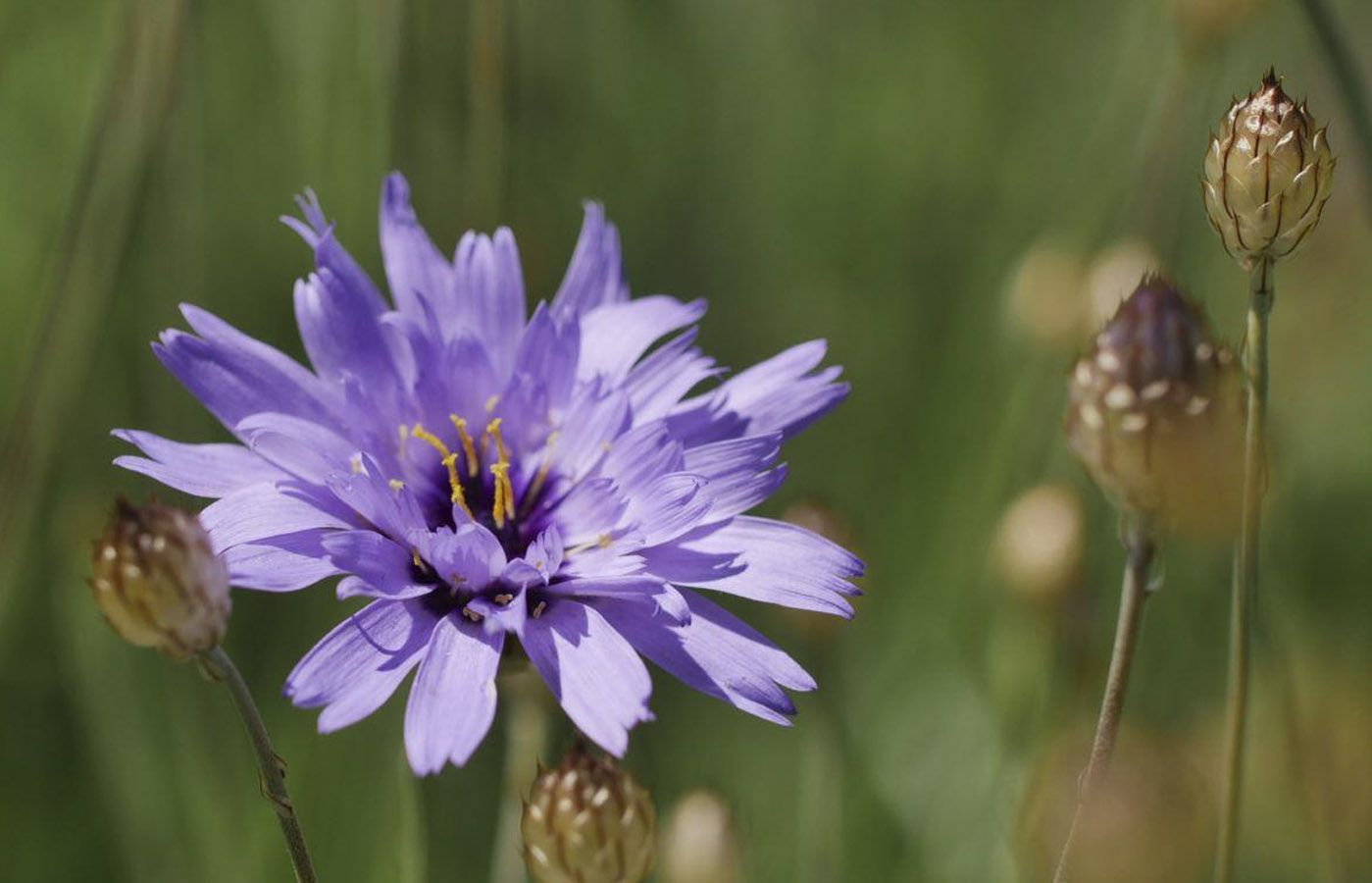 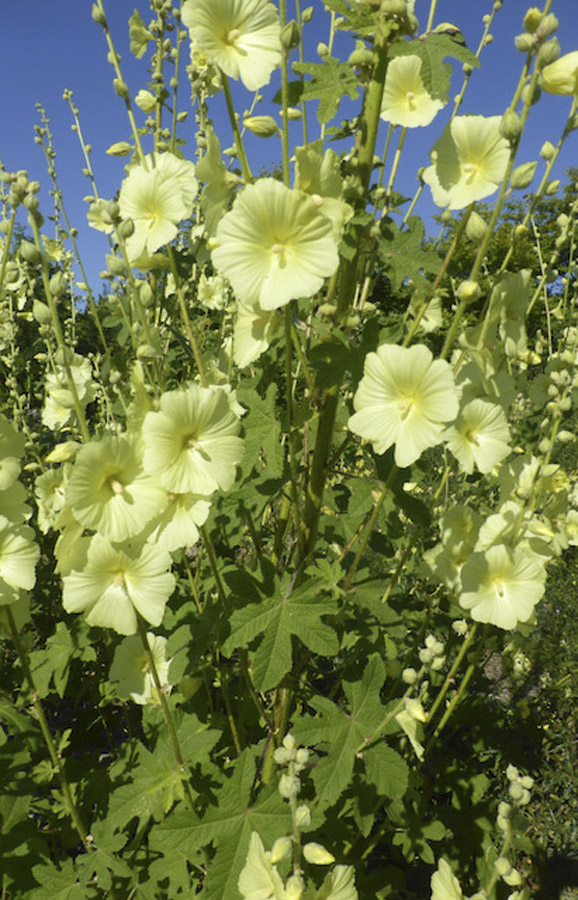 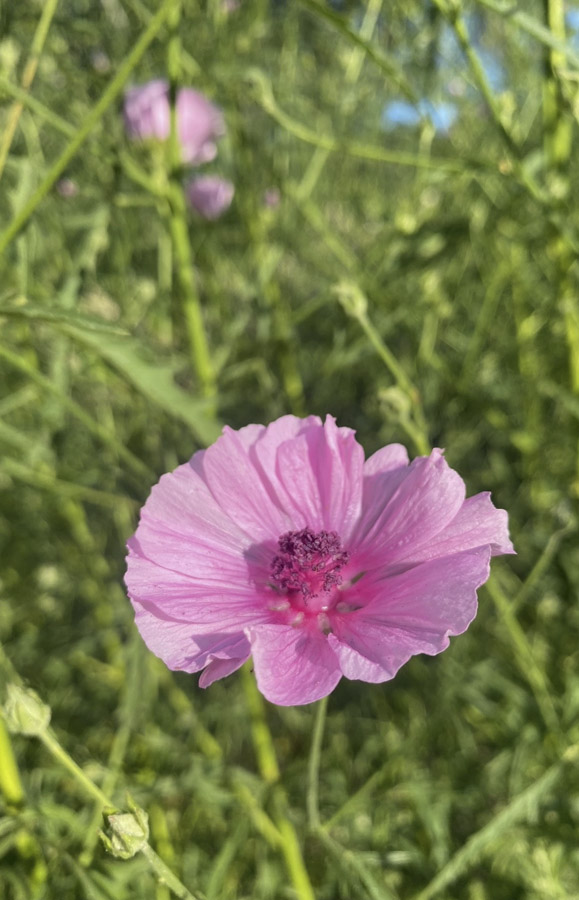 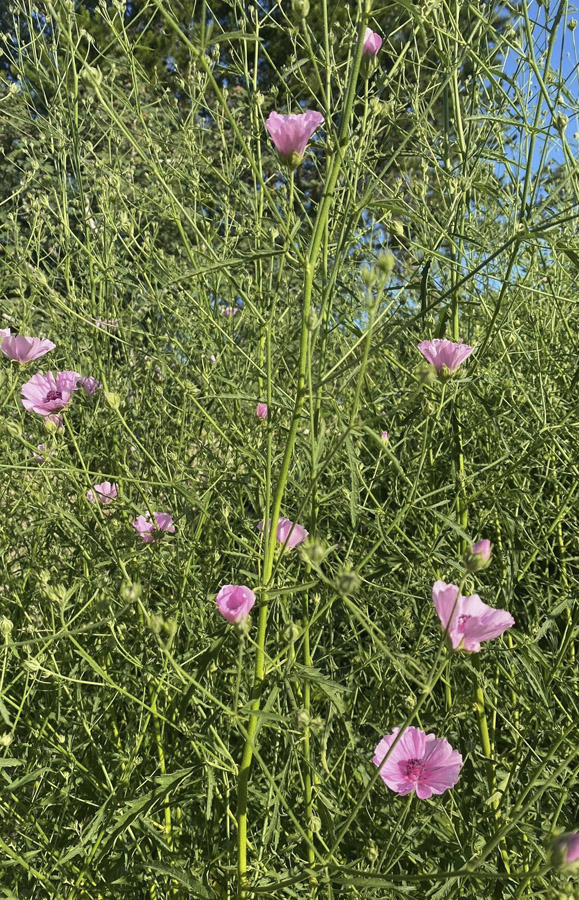 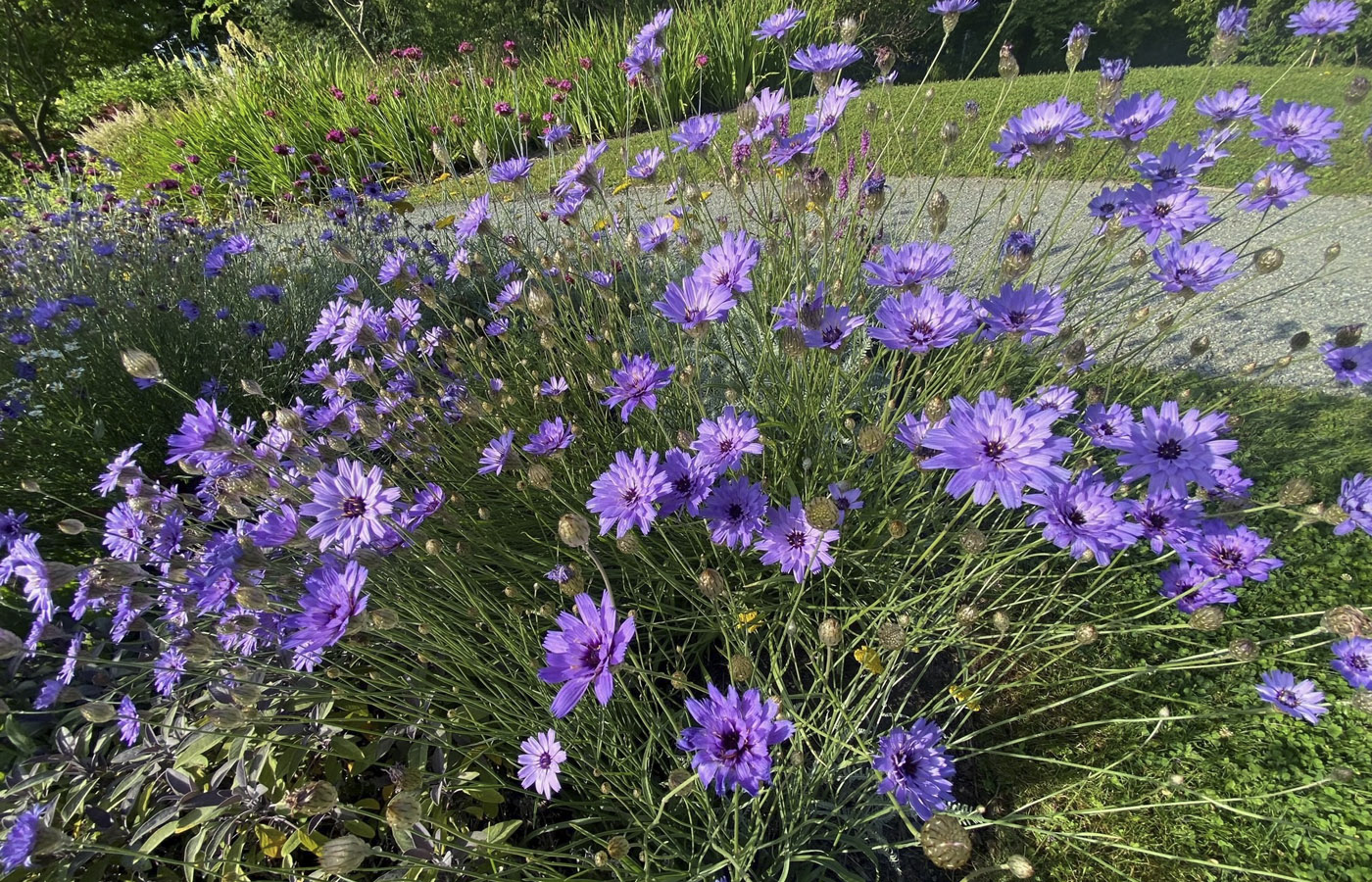 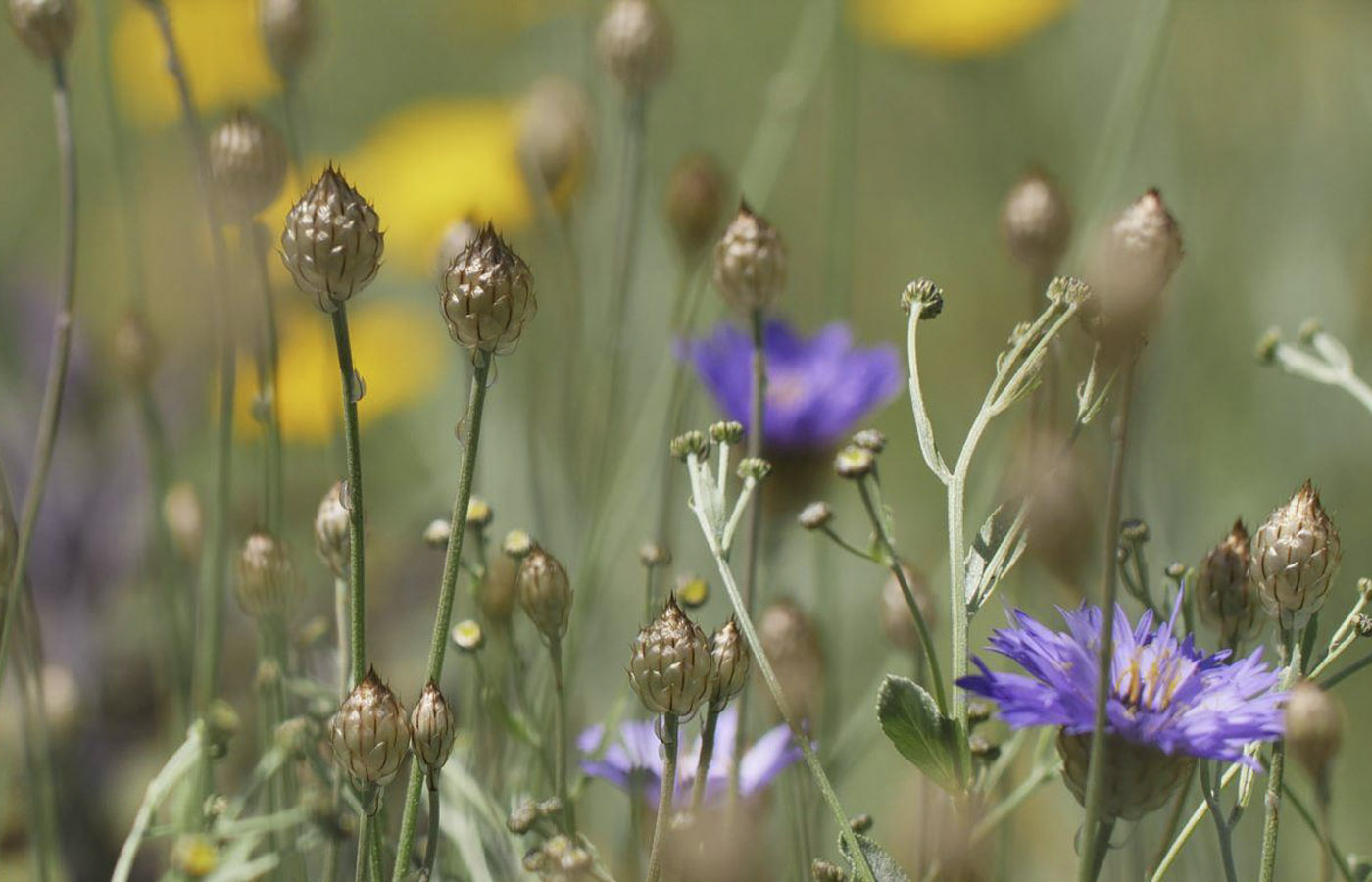 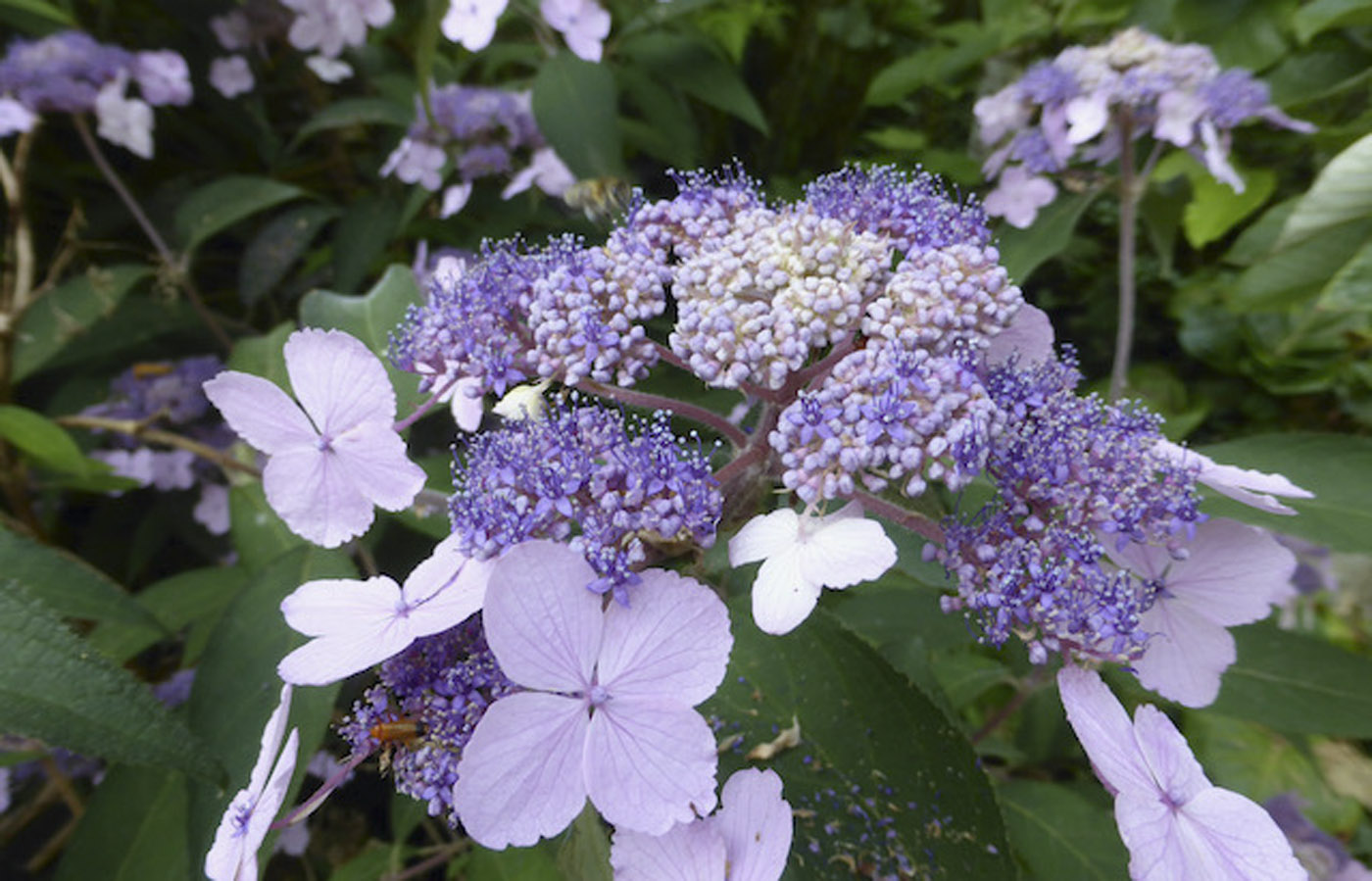 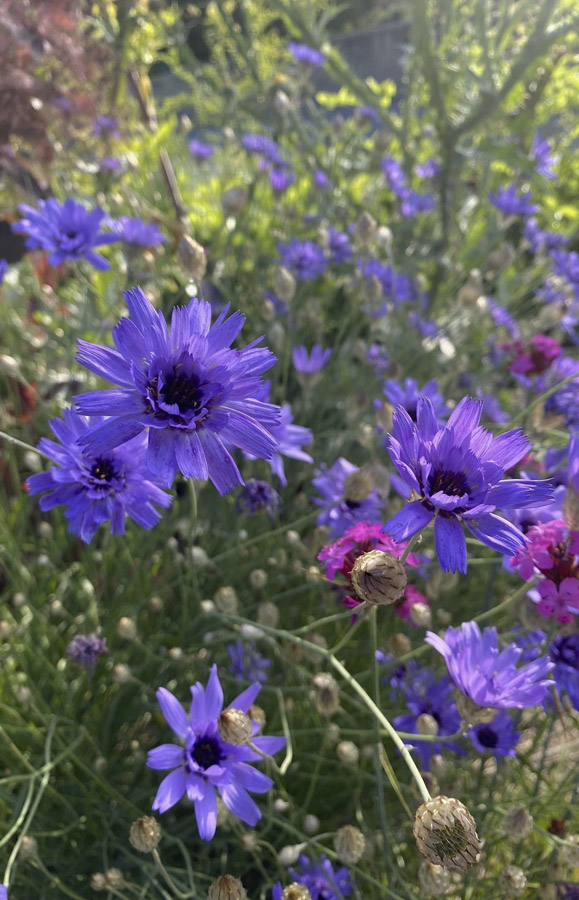 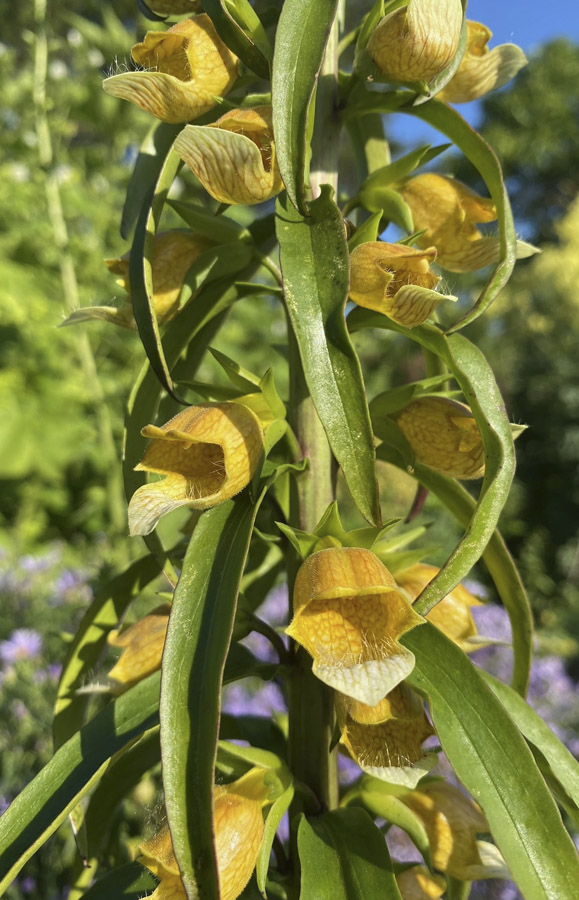 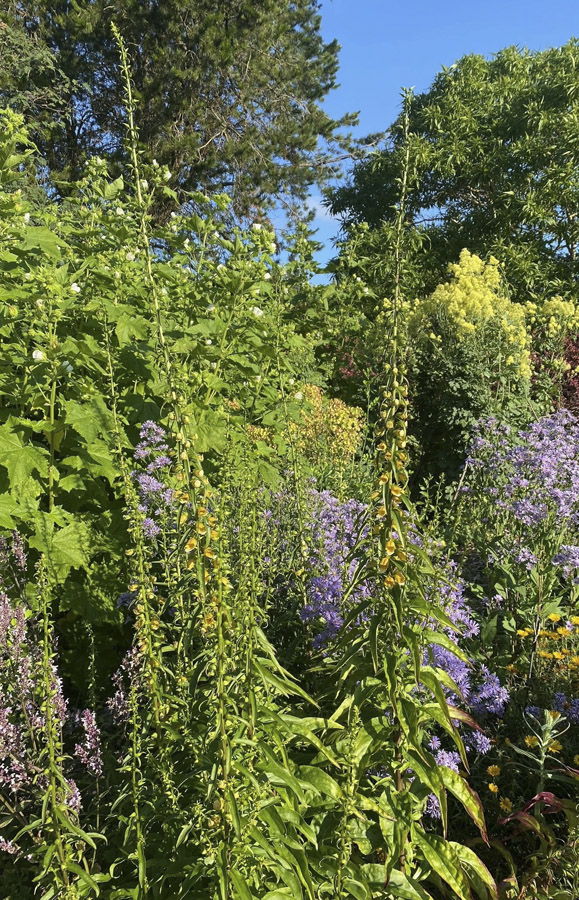 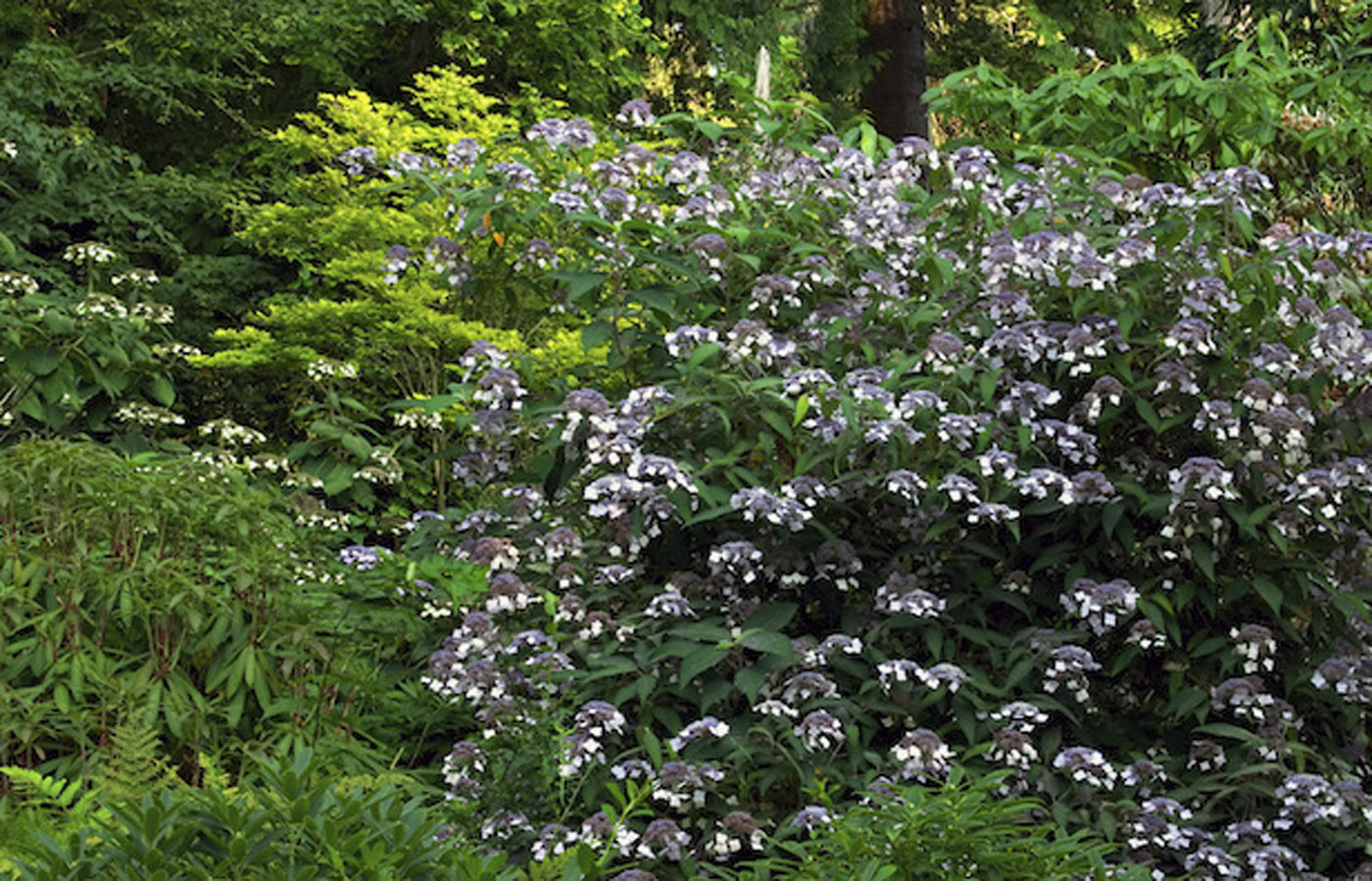 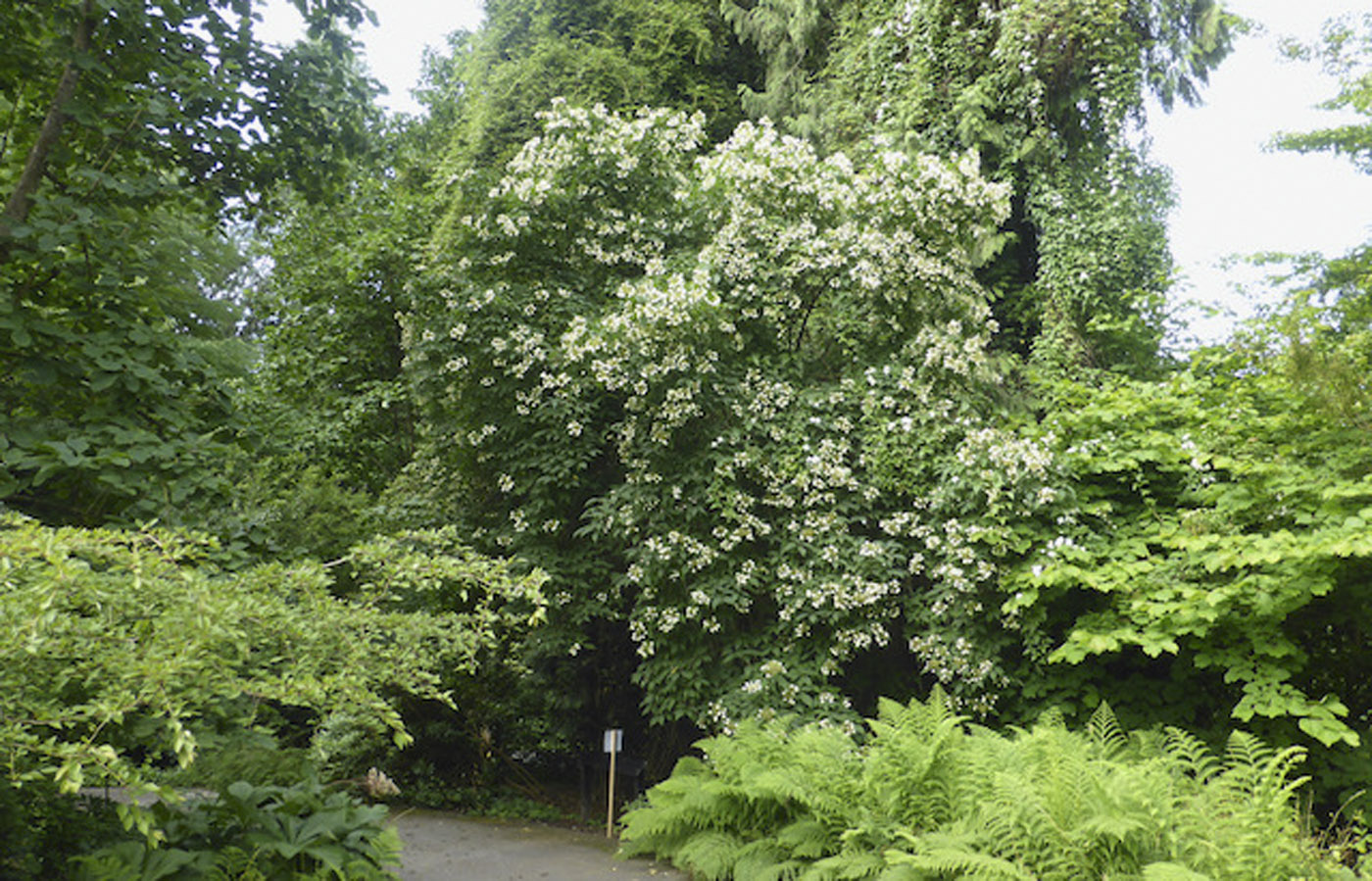 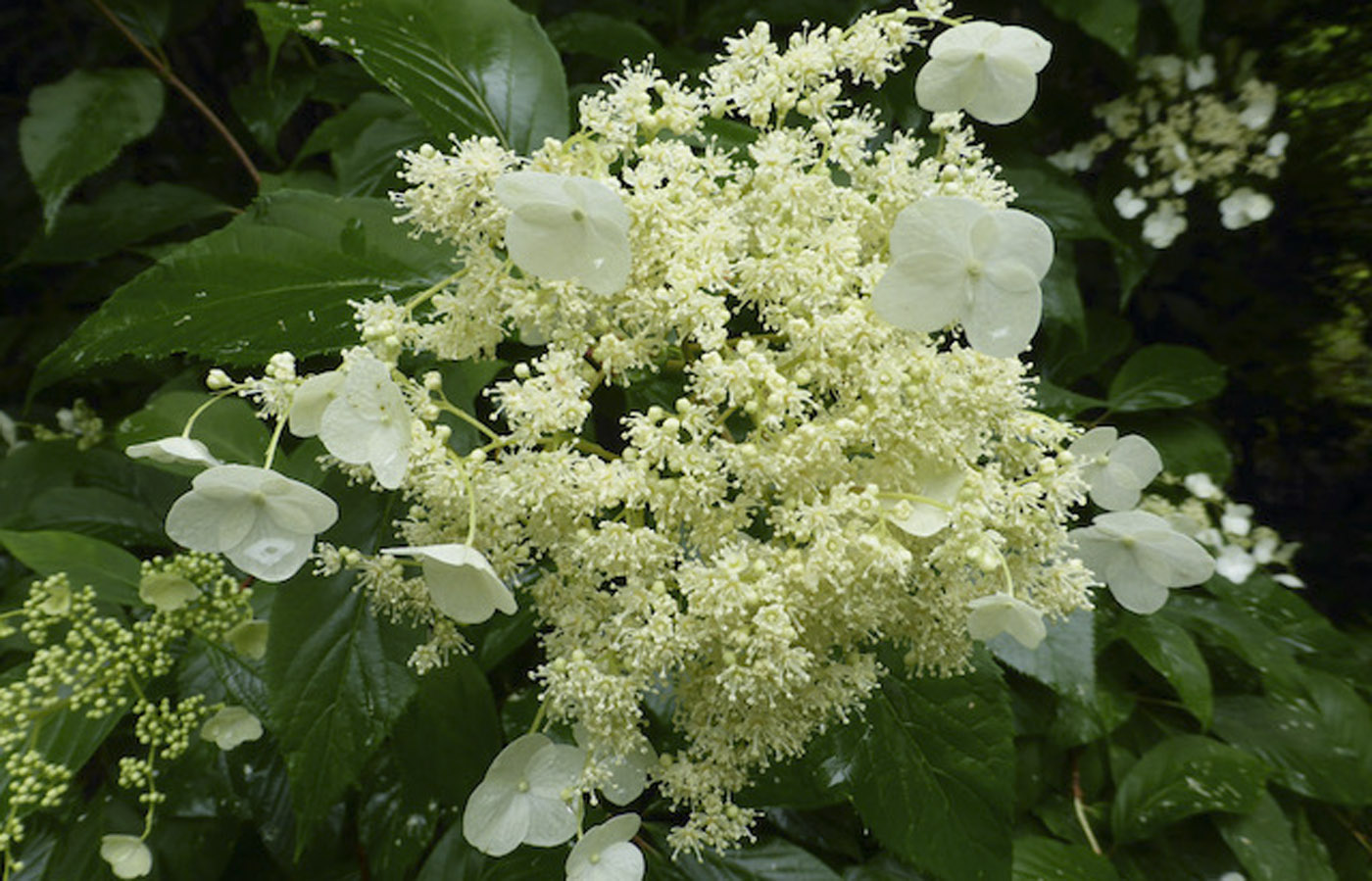 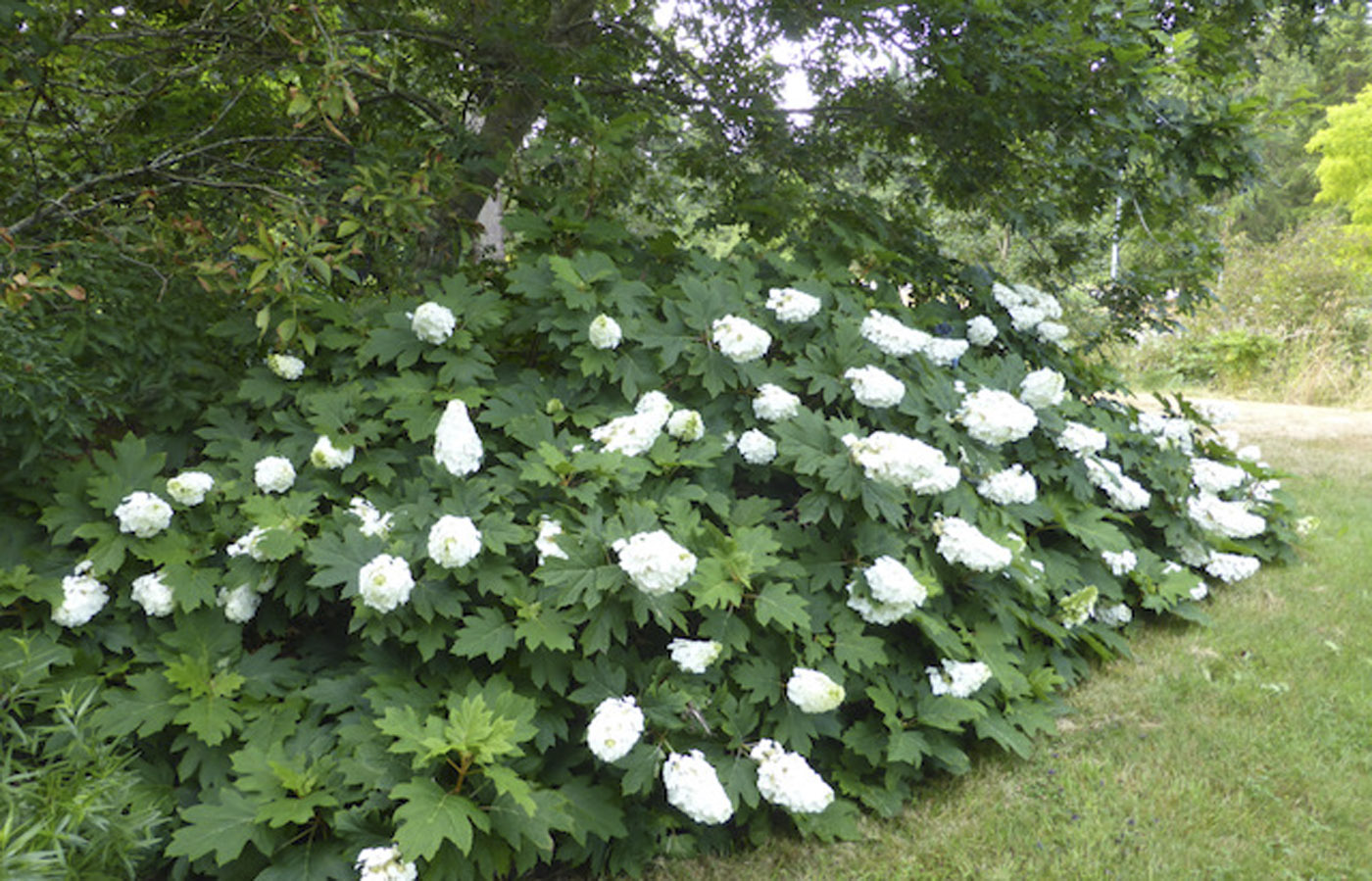 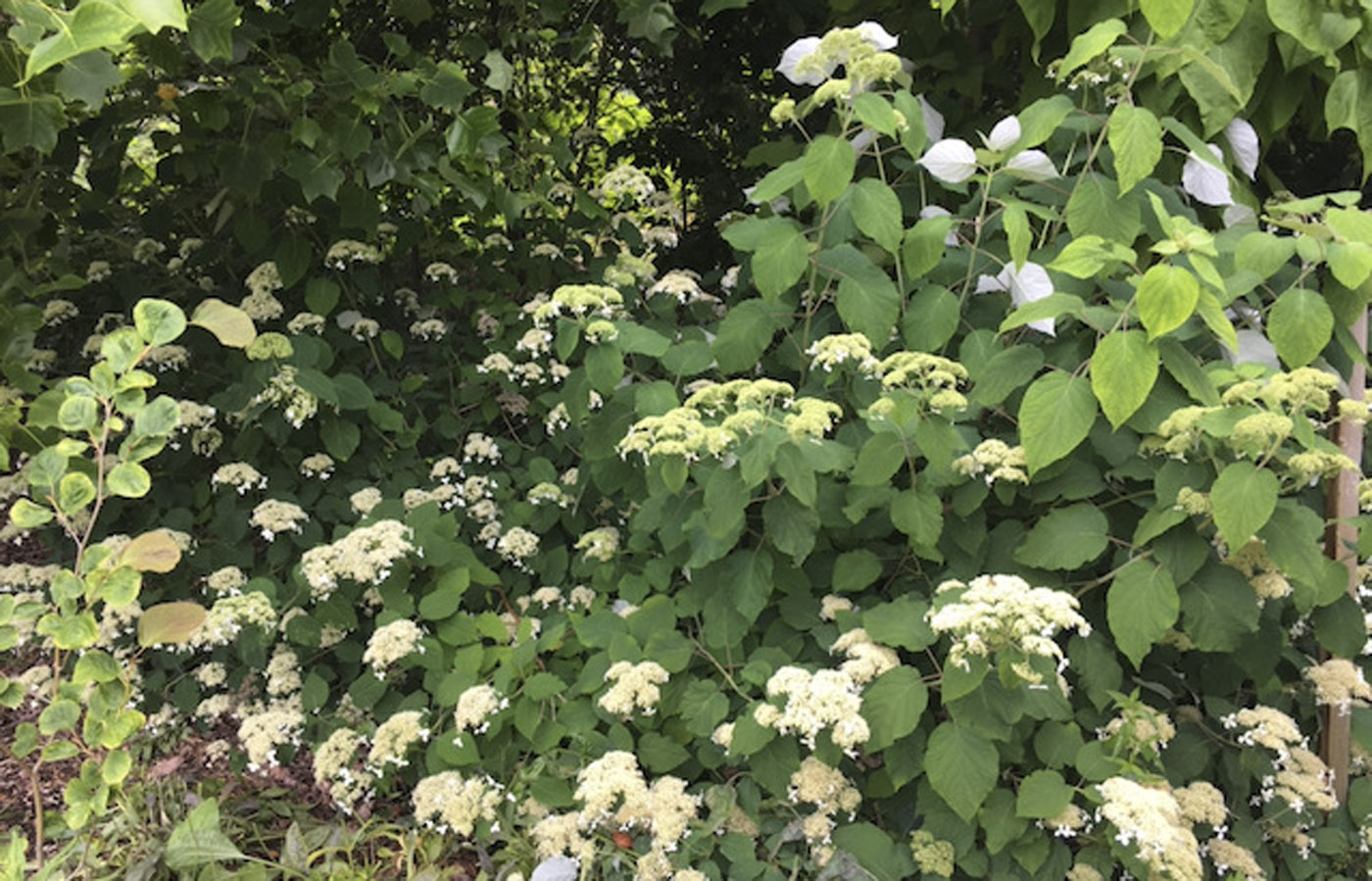 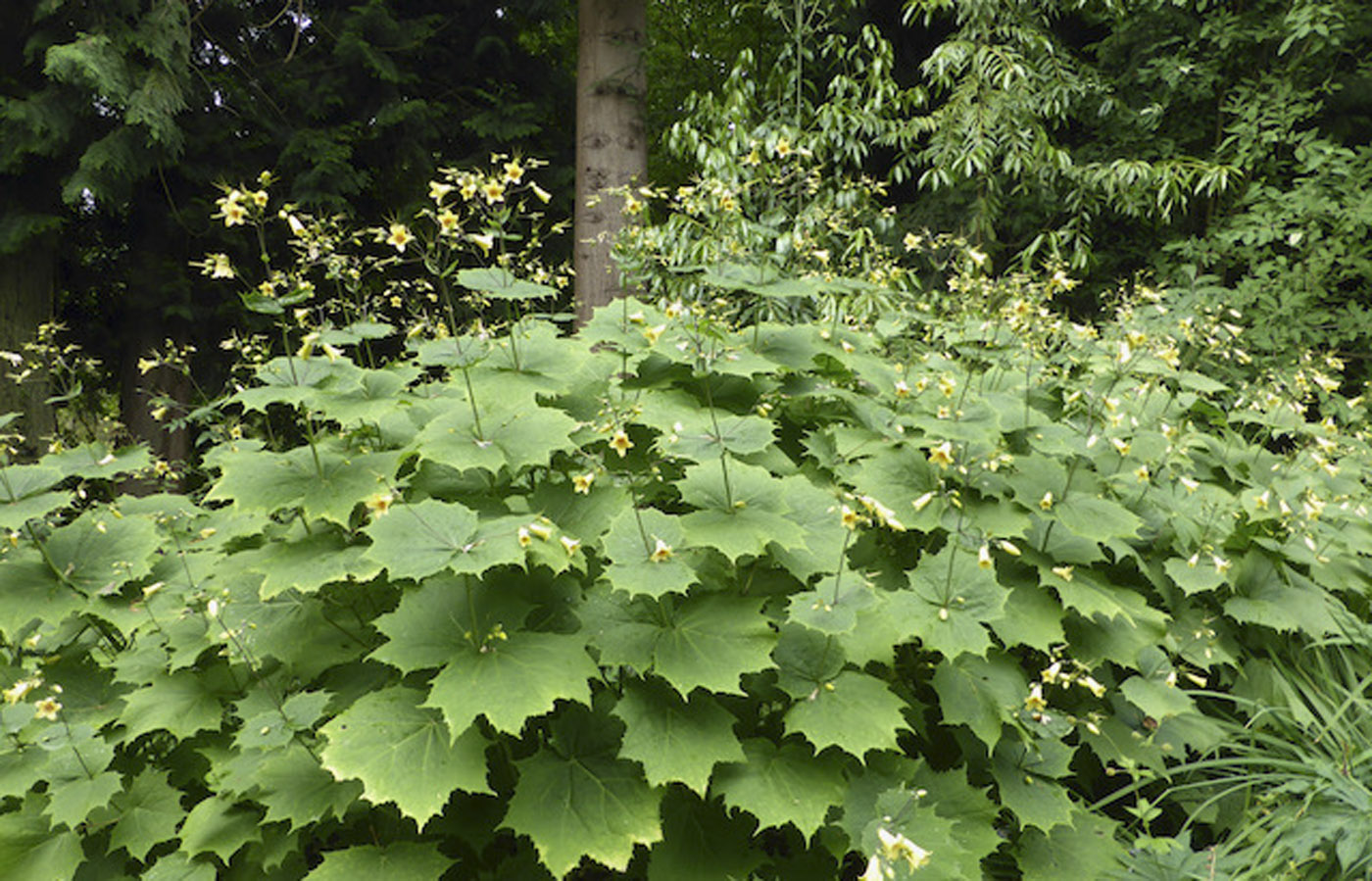 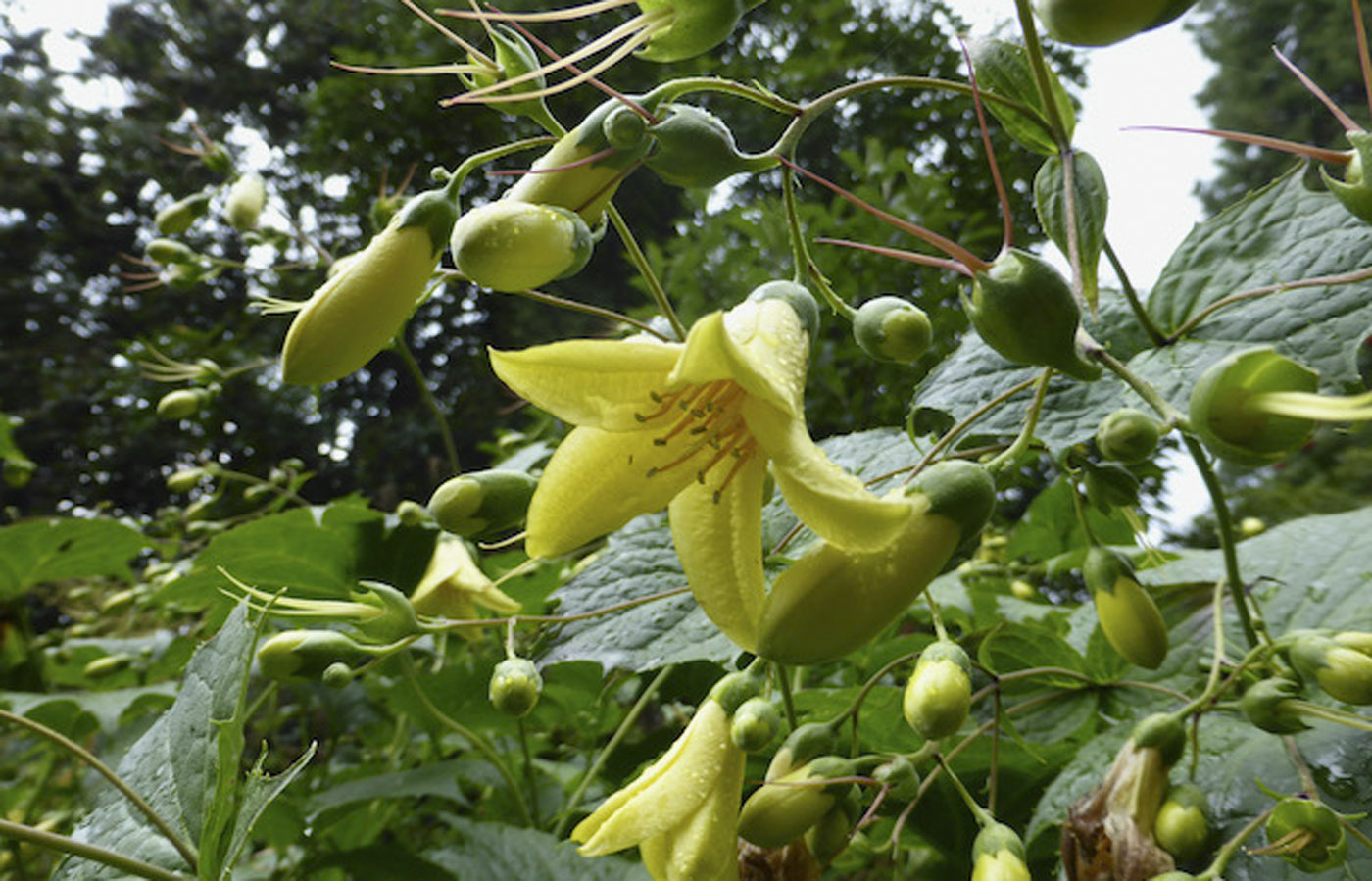 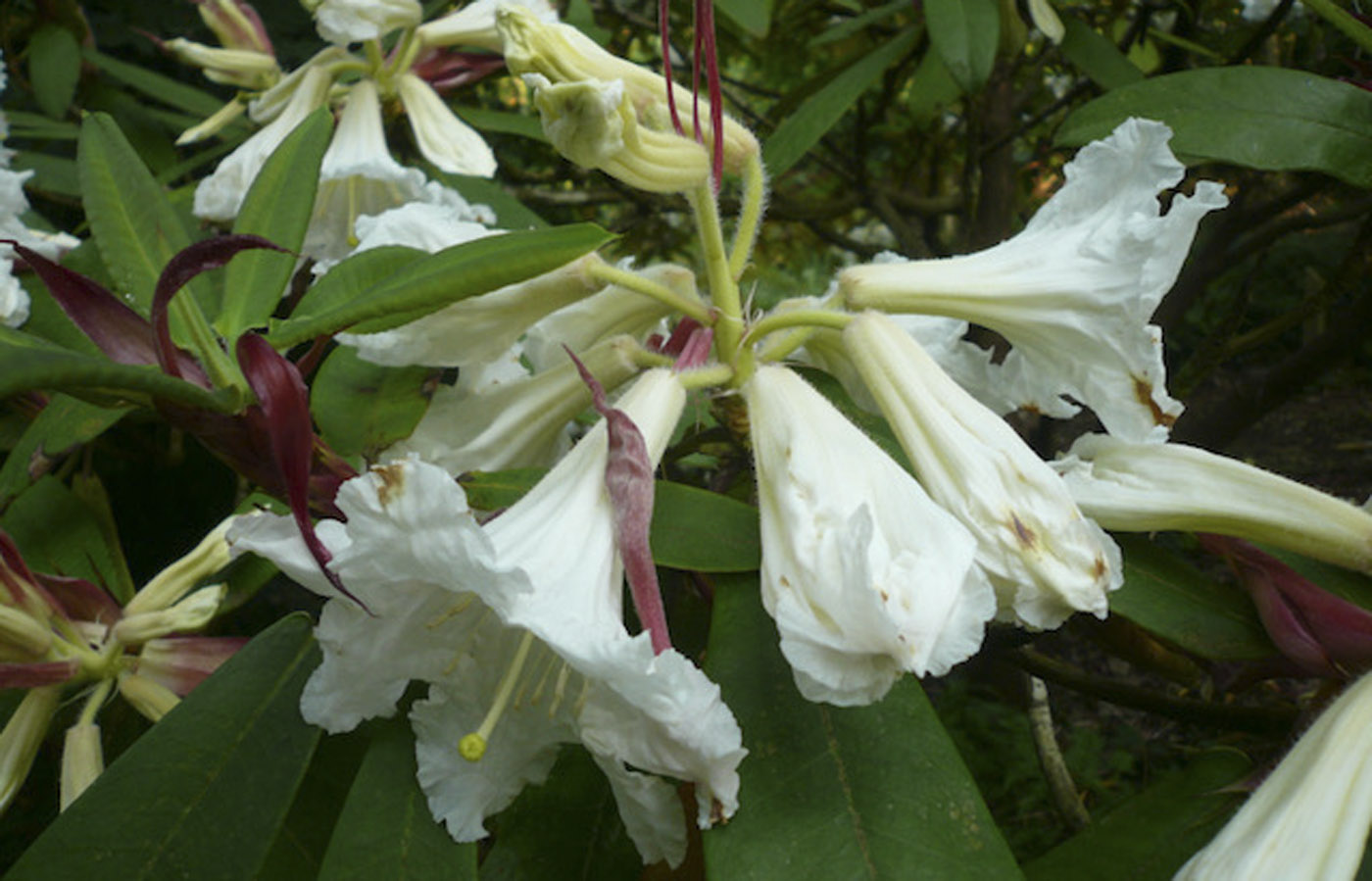 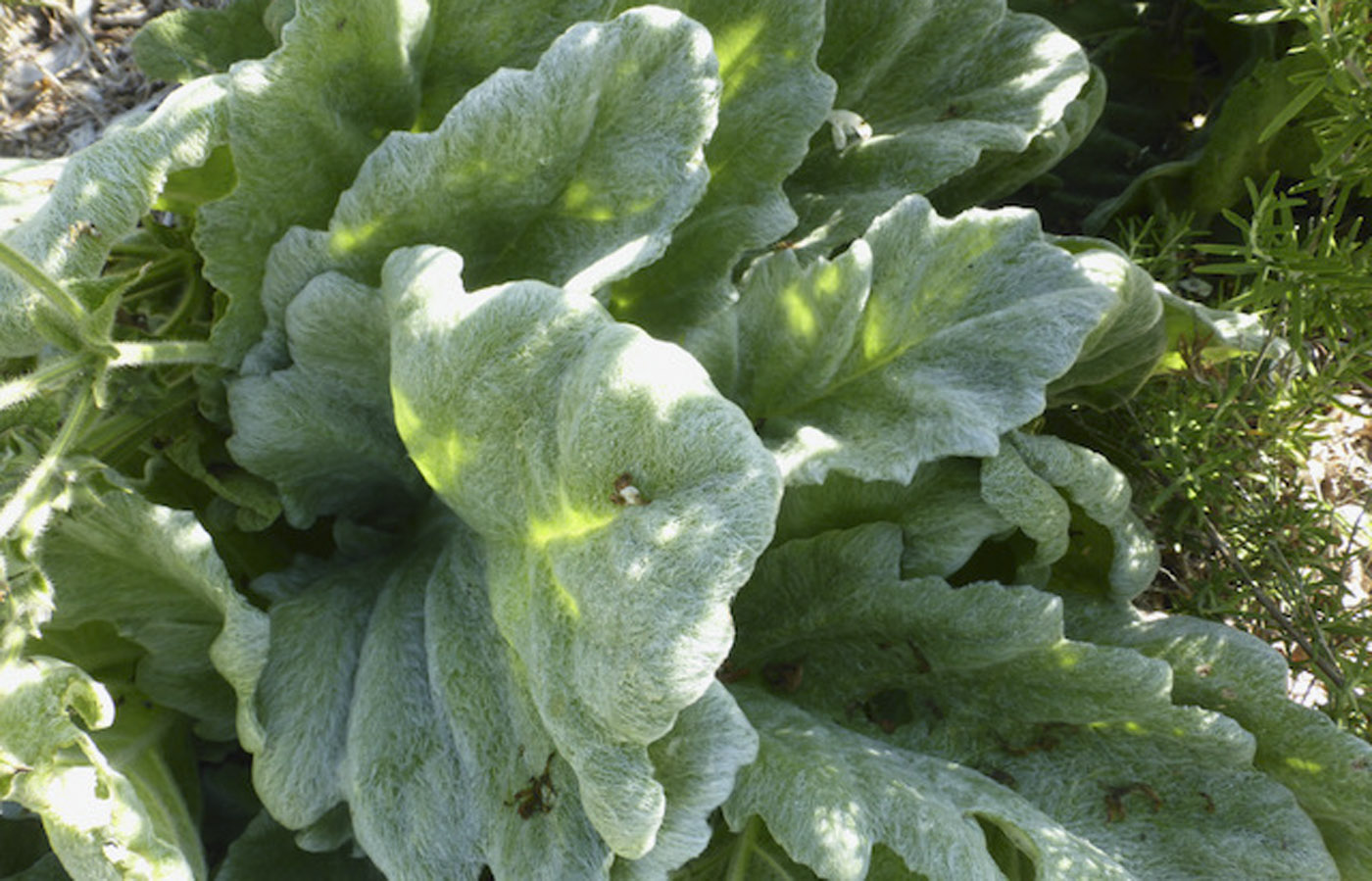 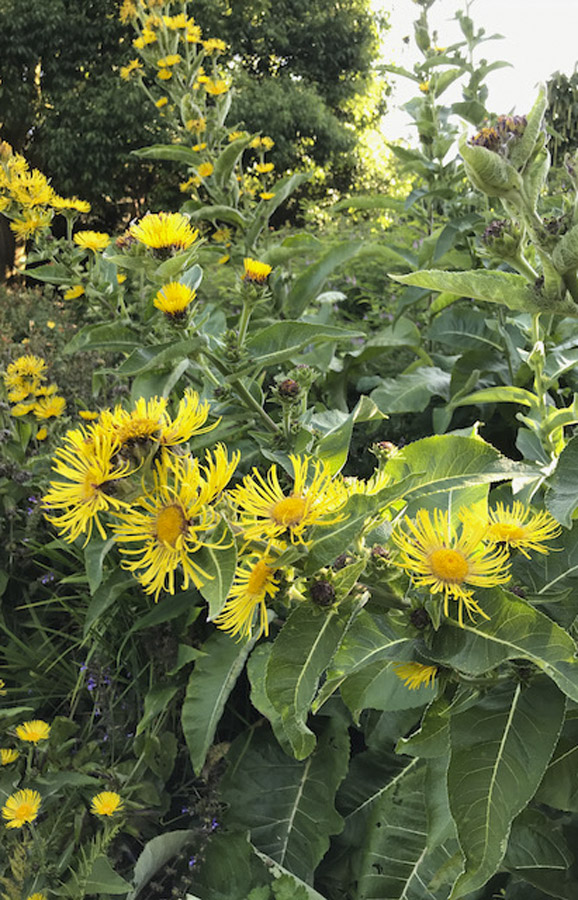 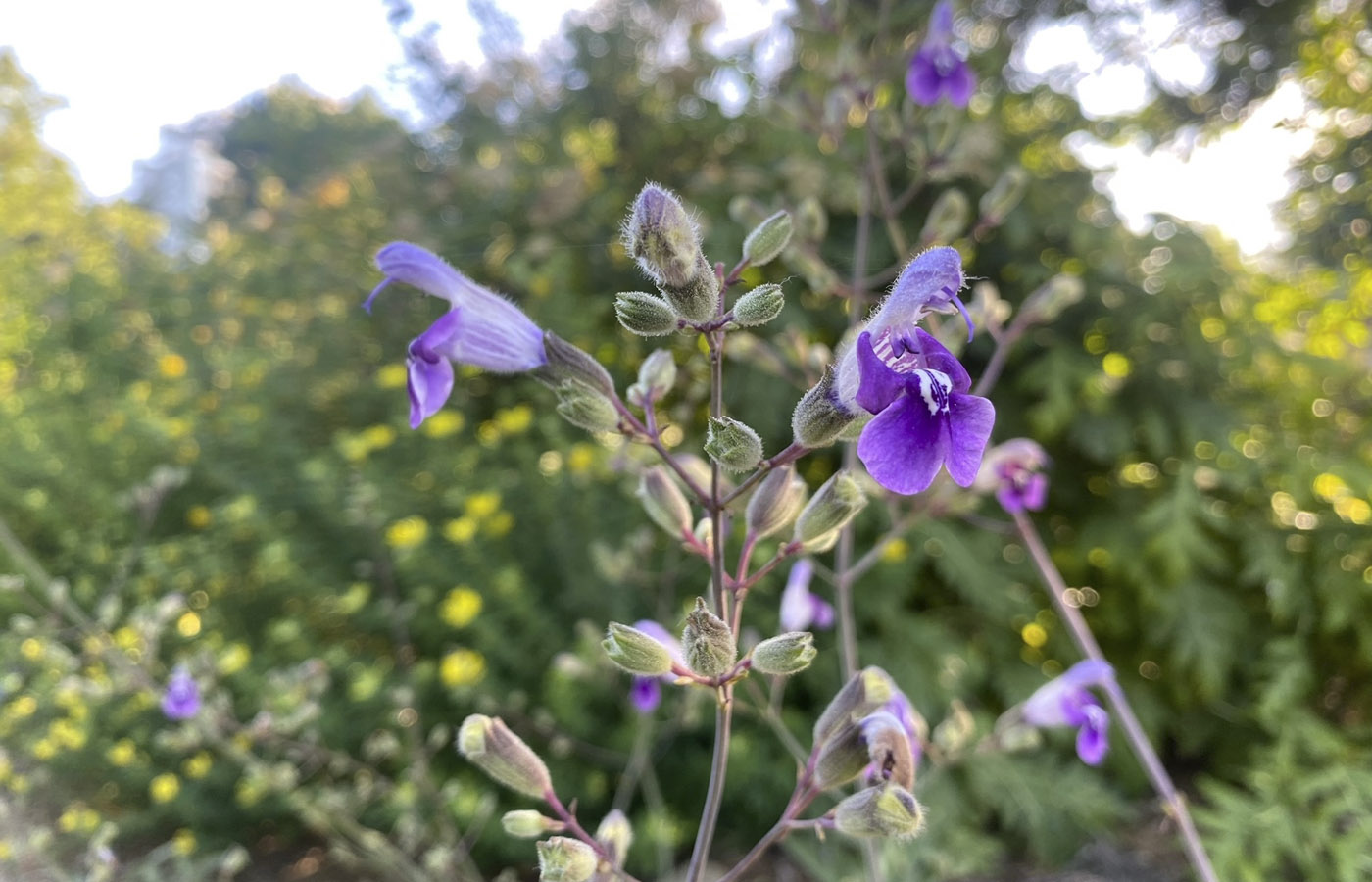 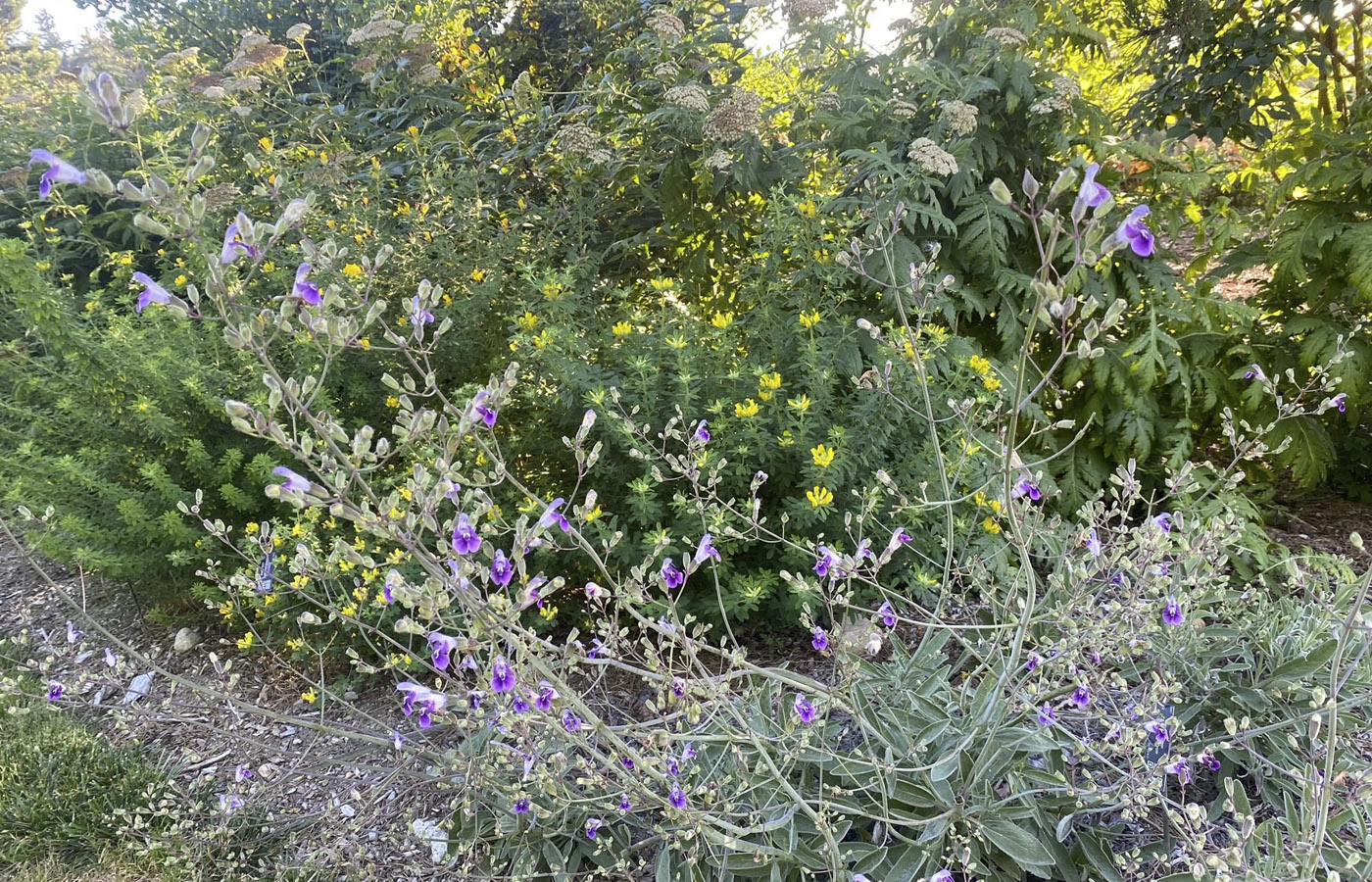