September in the Garden 2022 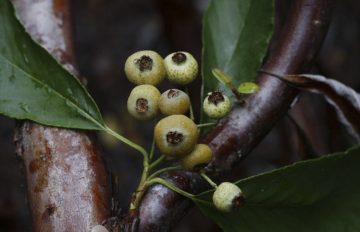 September is an excellent time for viewing mountain ashes and whitebeams, and 2022, like 2018 (when this article first appeared), is likely to be a banner year for their fruits in UBC Botanical Garden. Peviously united under the genus Sorbus, the whitebeams (genus Aria) bear simple (undivided) leaves, while the mountain ashes (genus Sorbus) are characterized by pinnately-compound leaves. In all, there are around one hundred species of trees and shrubs in Sorbus and another hundred or so in Aria. Both are valued ornamentally for their fruits, which are referred to by nearly everyone as berries. They are technically pomes—the same kind of fruit produced by apples and pears (and quinces, hawthorns, cotoneasters, photinias, etc.). Depending on the species or cultivar, pomes may be white, yellow, orange, brown, red or pink.

Sorbus commixta (Japanese mountain ash) is one of the most spectacular mountain ashes. The species lives up to its scientific name, in that it is highly variable, and much confused by botanists (commixta = mixed together). Individuals can be tall and narrow or shrubby, spreading trees. Pomes may be small and hard or larger and soft (and thus, taken earlier by birds), and orange, vermillion or red, but they are always remarkably glossy. We have a tall narrow, specimen with bright orange pomes at the western end of the parking lot. A smaller growing example with a spreading crown and smaller leaves, also with bright orange pomes is located in the David C. Lam Asian Garden on Lower Asian Way opposite Meyer Glade. The pink-fruited Sorbus vilmorinii is a shrubby species from the mountains of western China. It has a rounded crown of slender, down-curved branches, and unusually fine-textured foliage. The fruits are maroon purple at first, eventually expanding and becoming progressively lighter in colour until they are bright pink in late September or early October. The species commemorates the Vilmorin family, whose legendary exploits in the field of horticulture and gardening date from the late 18th century. There is a particularly fine specimen of Vilmorin’s mountain ash growing out of a tall stump on Rehder Trail just shy of Lower Asian Way.  Another pink fruited species can be found growing along the service road on the south side of the Asian Woodland in the E.H. Lohbrunner Alpine Garden, but you’d be excused if you missed seeing it, as its mature height is barely above the ground. Nevertheless, Sorbus reducta (dwarf mountain ash) is a creeping shrub usually only 50 to 75 cm tall adapted to growing partially buried on steep boulder slopes in the mountains of its native southwestern China. Tiny, hard, crimson-green pomes expand through the late summer to the size of baby peas, becoming paler and more evenly dull pink. In keeping with the small stature, the leaves are diminutive, as well. Autumn colour can be a rich burgundy-red, but it is usually short lived.

The whitebeams are as diverse as the mountain ashes. There are species whose leaves resemble those of apple trees, quinces, hawthorns and alders. In fruit, the pomes from one species to the next are even more varied—from lozenge- to apple-shaped—and they range in colour from green to lemon yellow, orange, red and purple. As well, the pomes can display degrees of russetting.

The classic Asian whitebeam is Aria thibetica  (Tibetan whitebeam). A round-headed tree with large, broad leaves that are grey-hairy on the undersides, Tibetan whitebeam bears sizable clusters of large orange-red pomes. The combination of dark green, grey and orange-red is arresting, particularly when the foliage begins to burnish red in the autumn. Perhaps the most attractive specimen of this species in the Garden (a yellow-fruited variant) is on the southwest side of Wharton Glade. Aria hemsleyi (Hemsley’s whitebeam) typically forms a broad, tall crown with many upright branches that splay outward with age. When A. hemsleyi is grown in the sun, the leaves are often folded upward along the midrib, attractively exposing the silvery undersides, but also the golden-yellow, russetted pomes. The species was named for William Botting Hemsley (1843- 1924) who was Keeper of the Herbarium and Library at Kew. There is a specimen on Maries Trail near the north end of Staunton Trail, and another south of where Rehder Trail crosses Straley Trail.  Another yellow-fruited whitebeam is the rare Bhutanese Aria karchungii (on Lower Asian Way near Farrer Trail), which has an exceptionally narrow upright crown, pleated leaves that are green on both sides, and drooping clusters of lemon-yellow, lozenge shaped pomes. 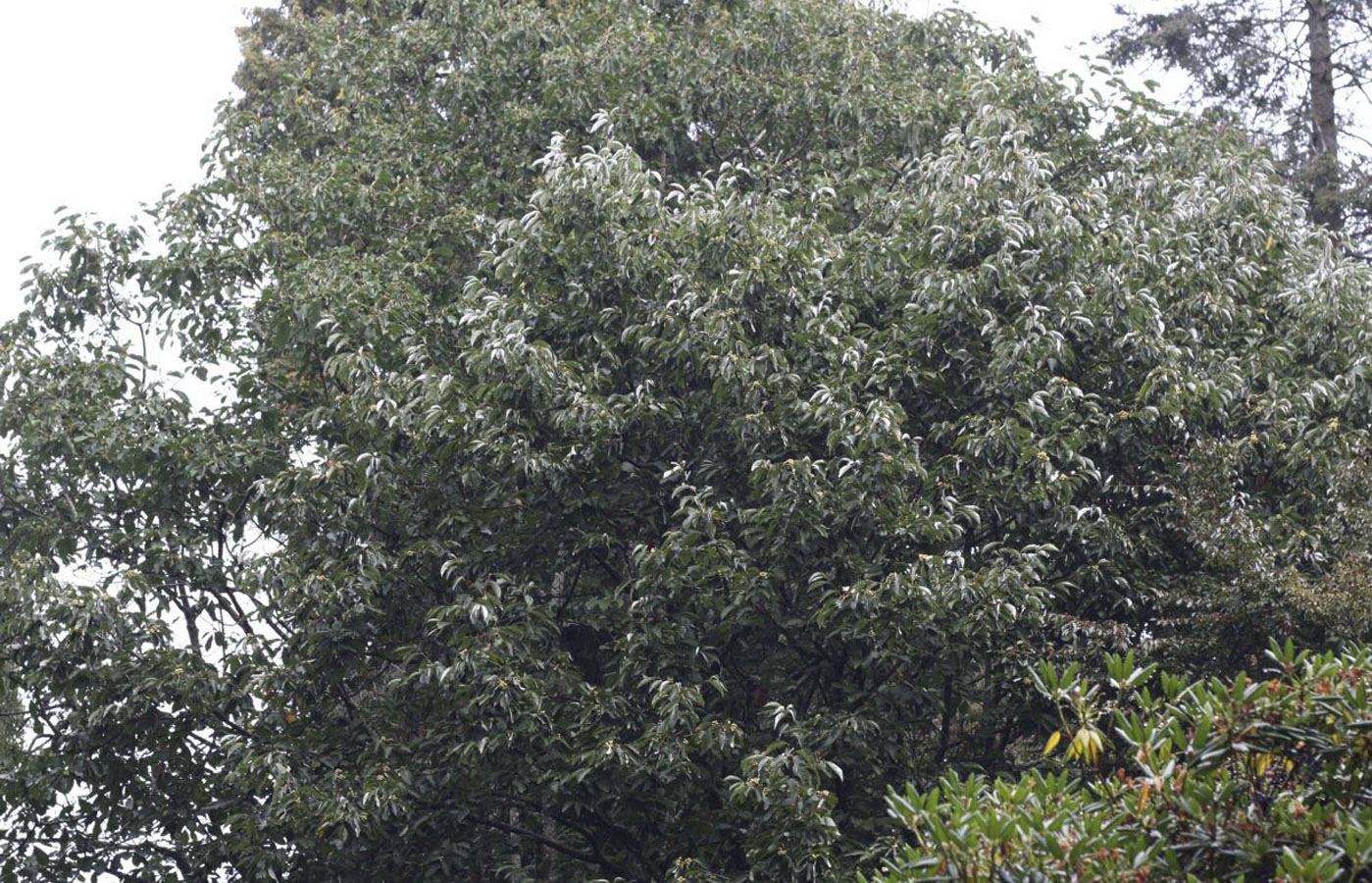 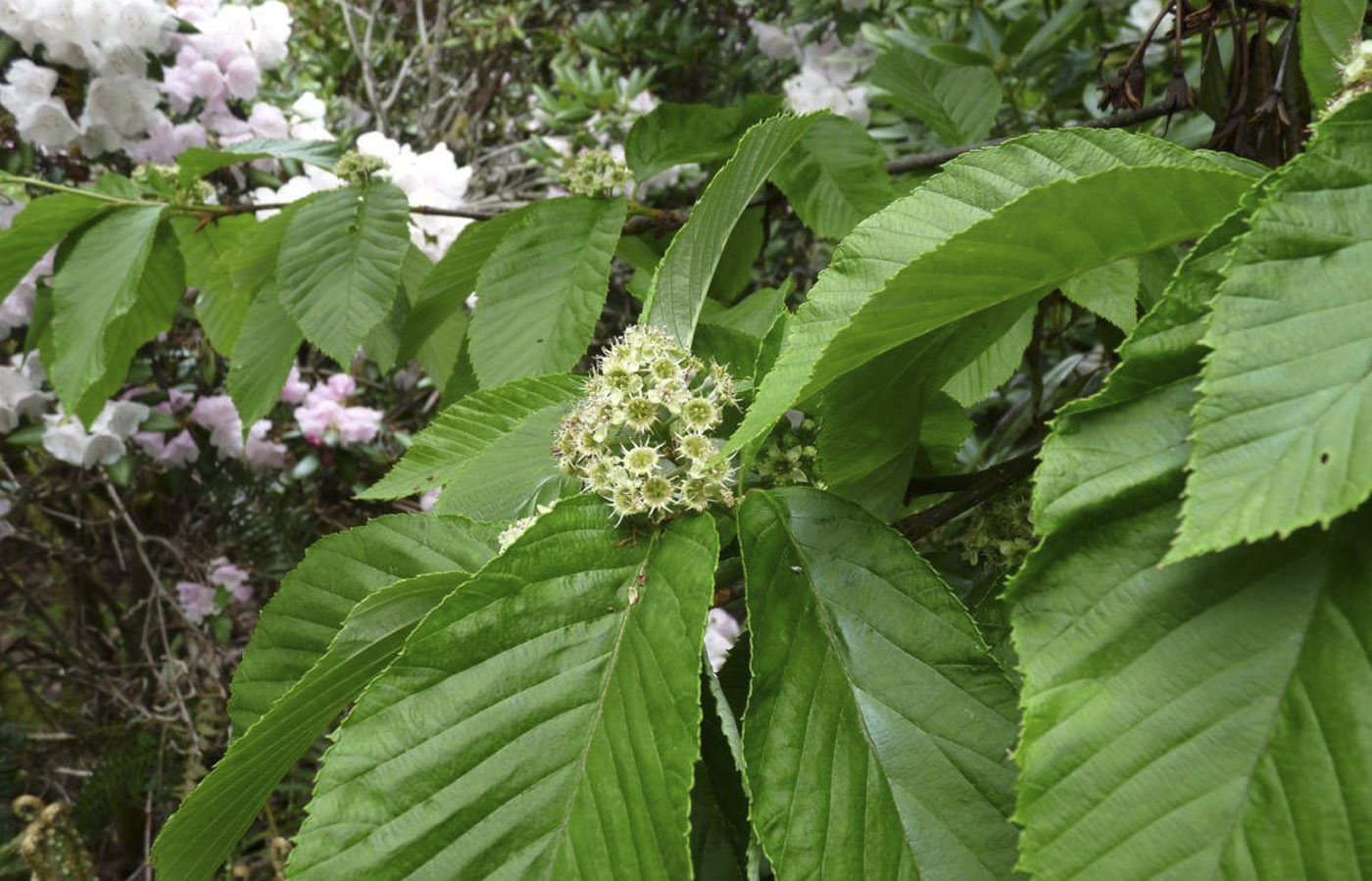 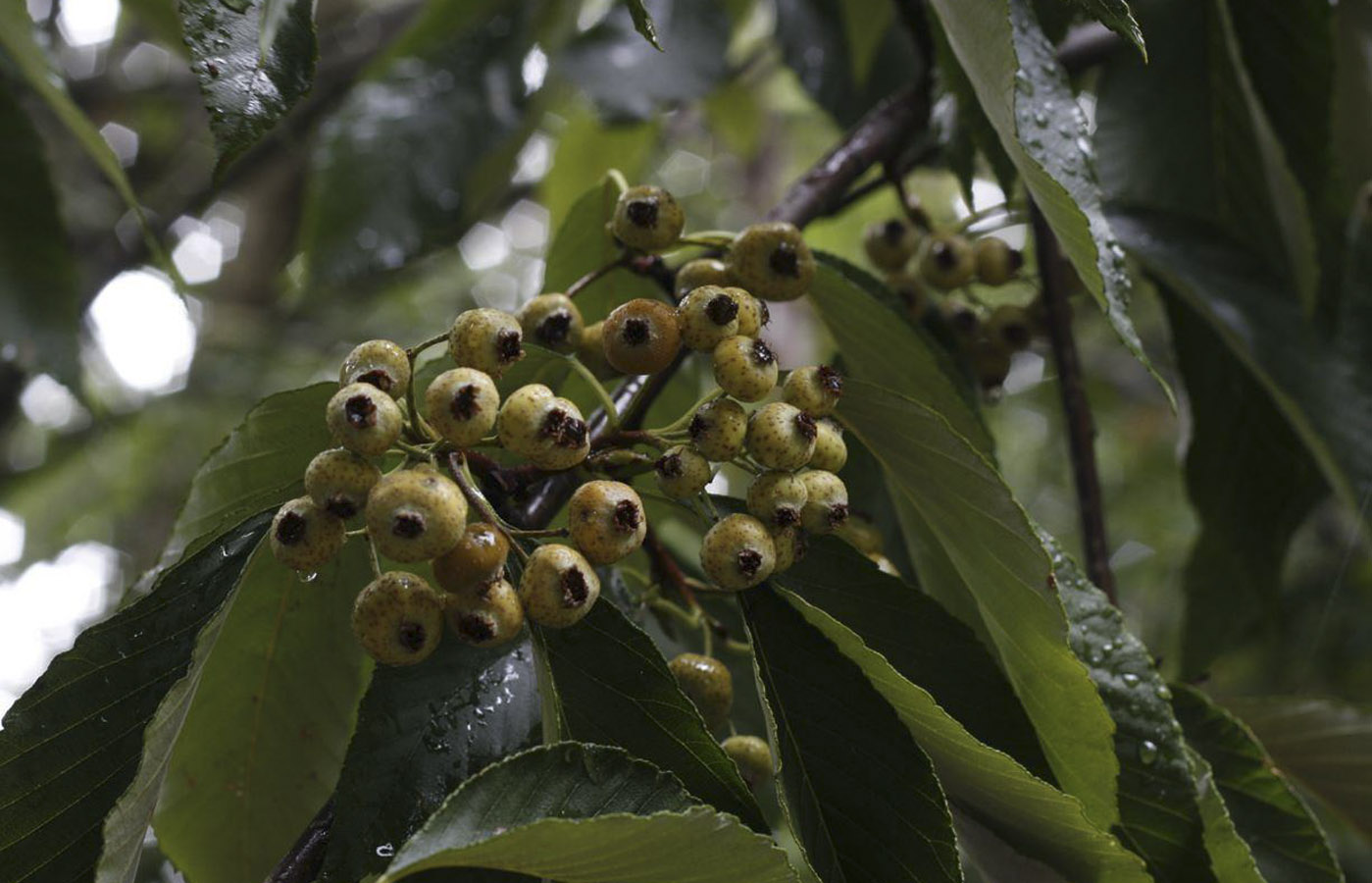 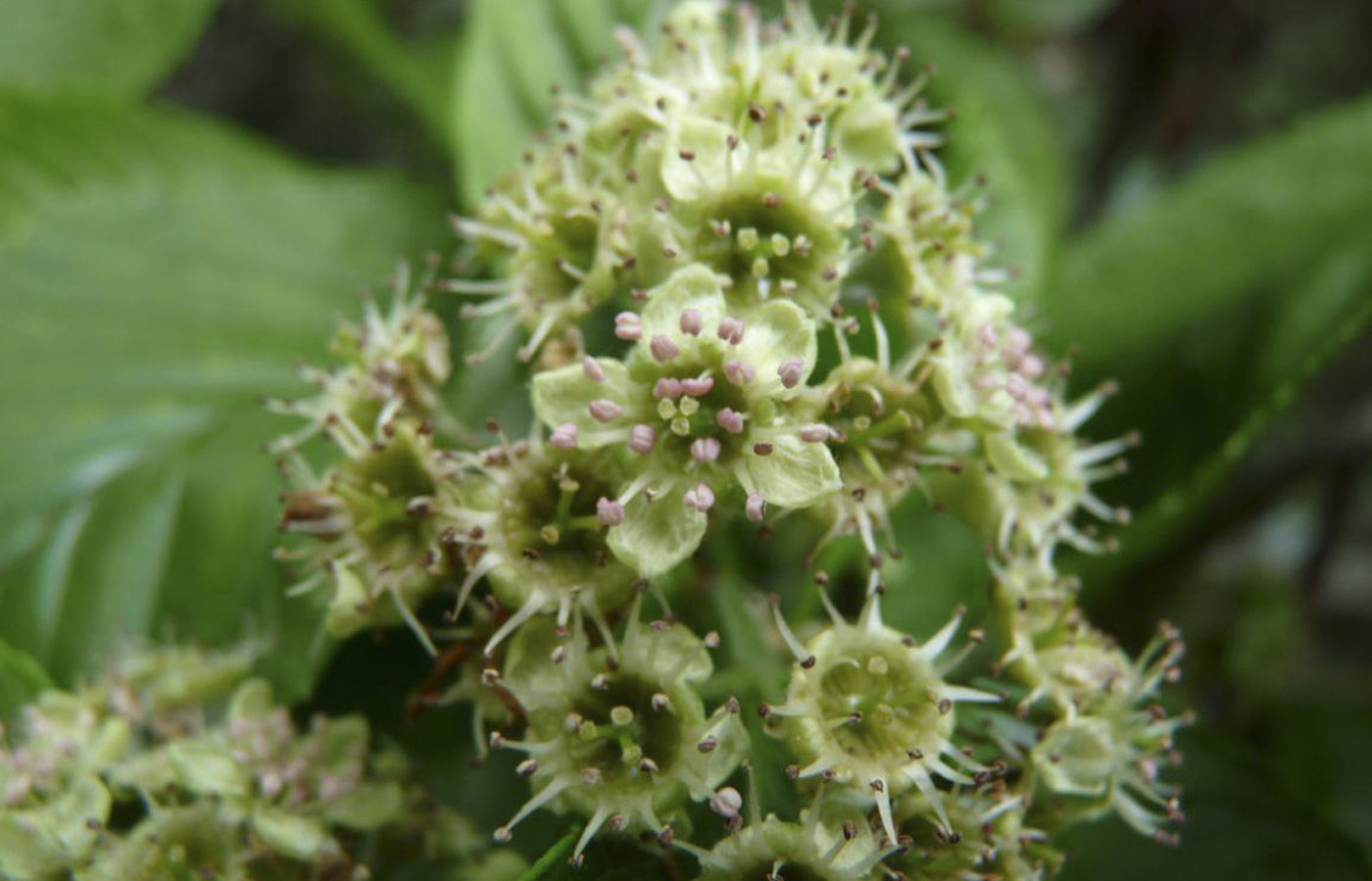 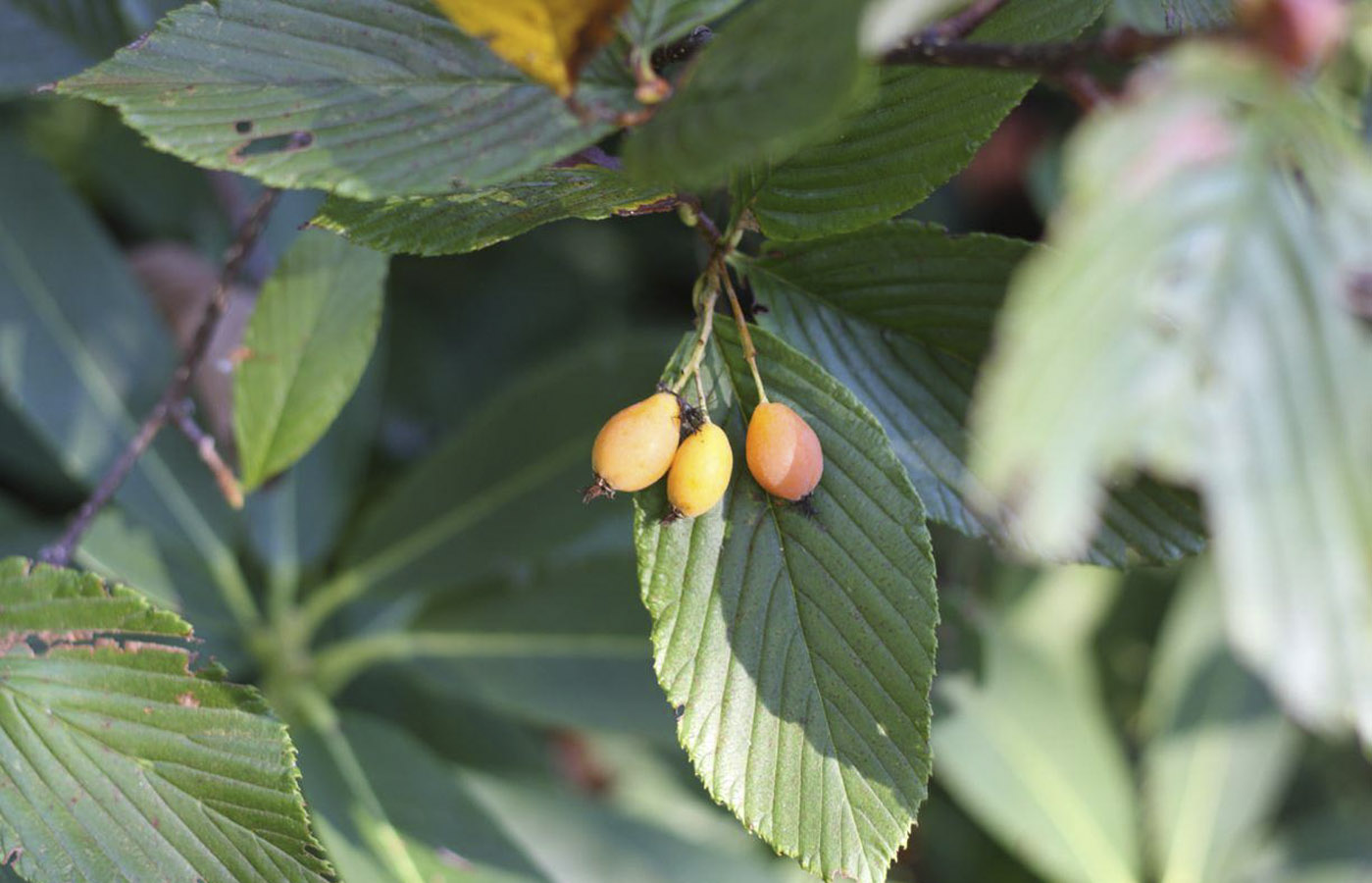 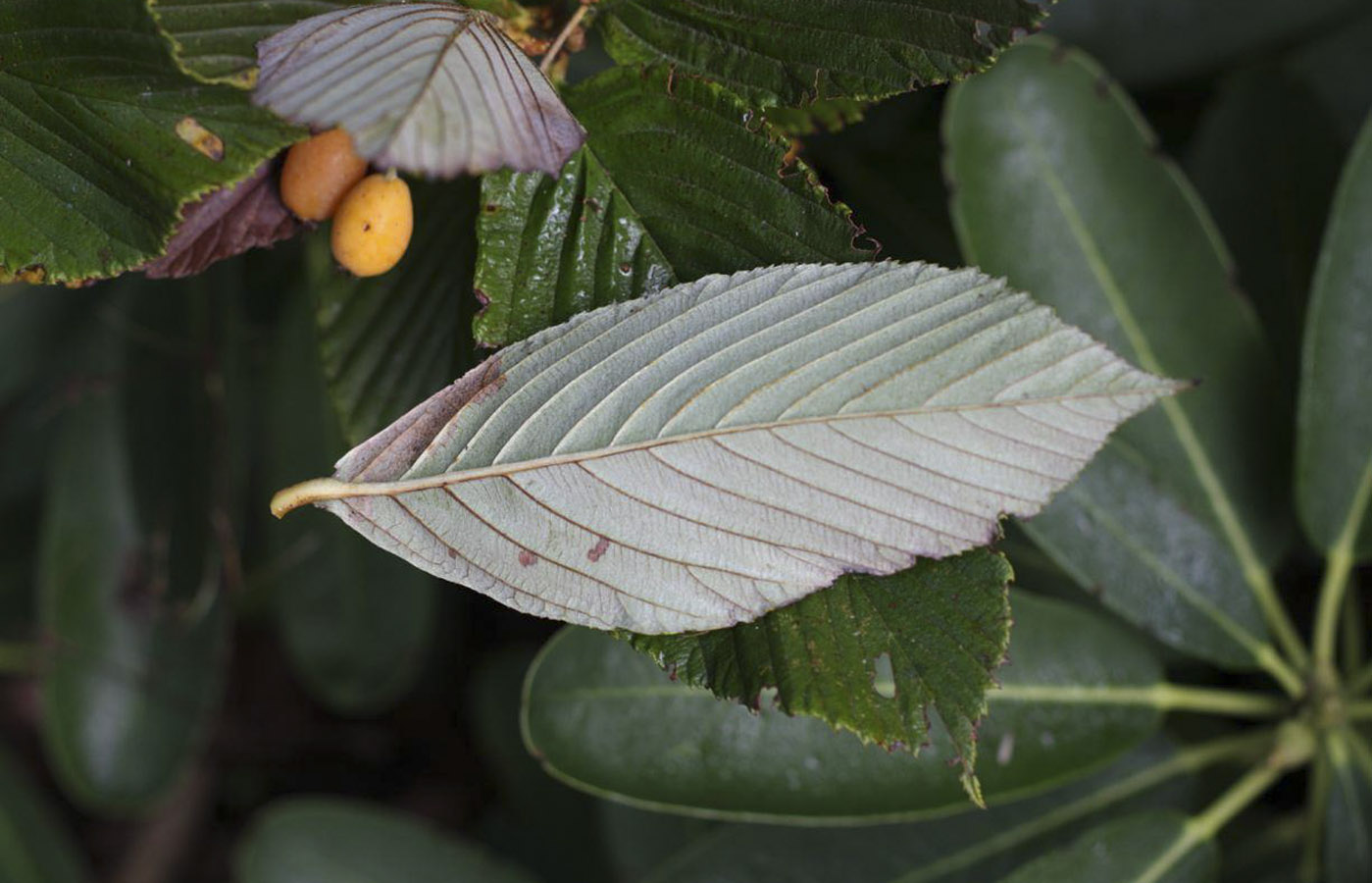 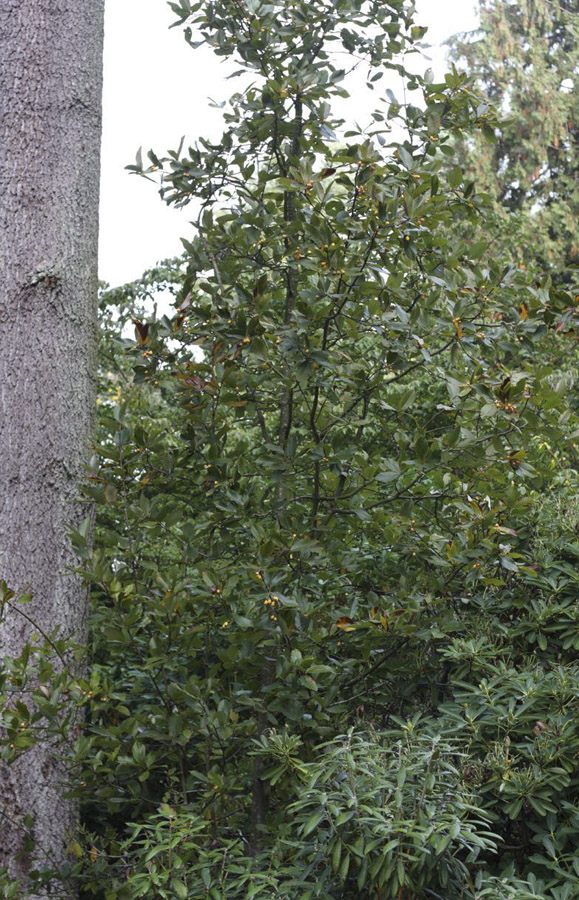 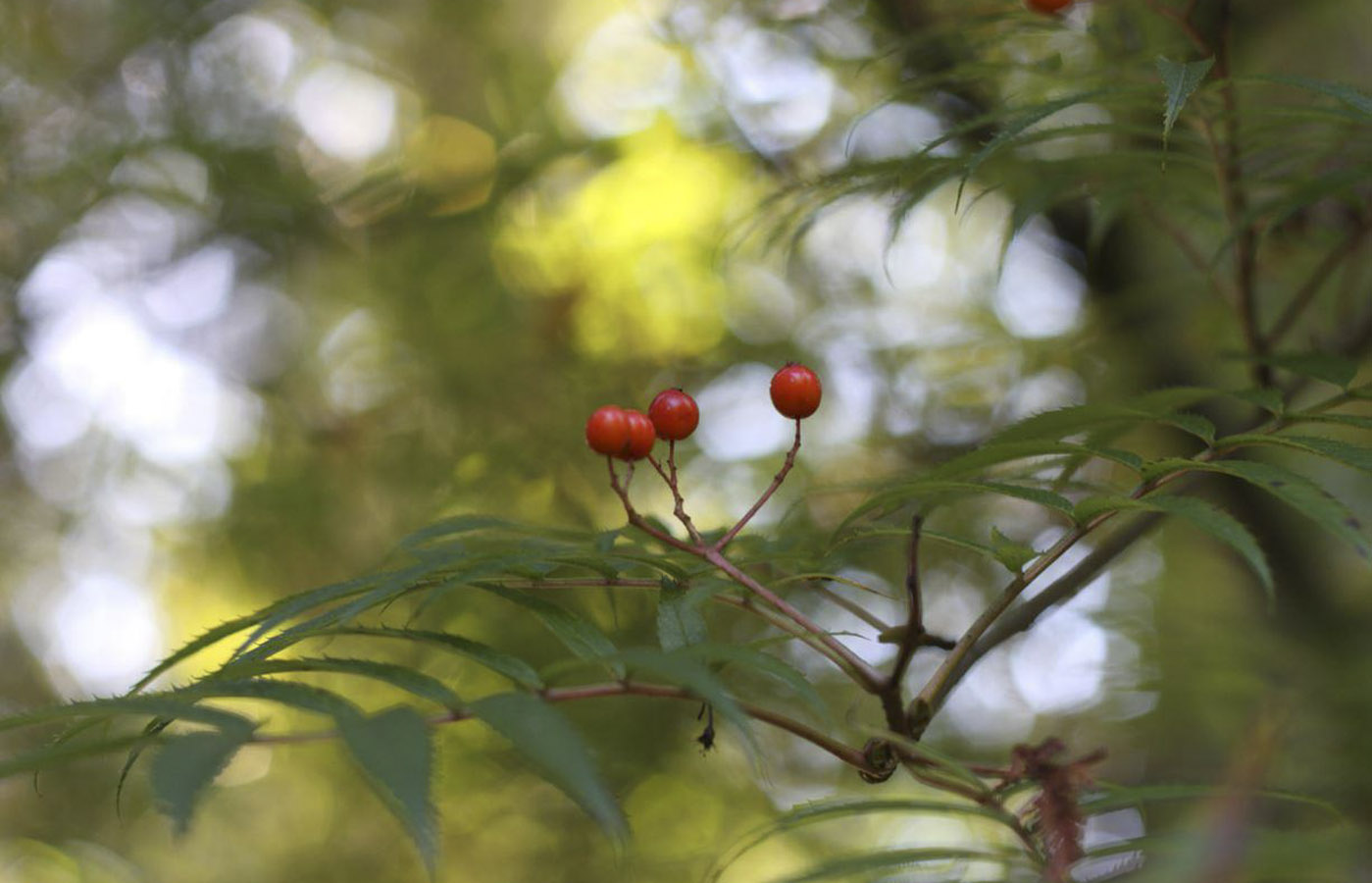 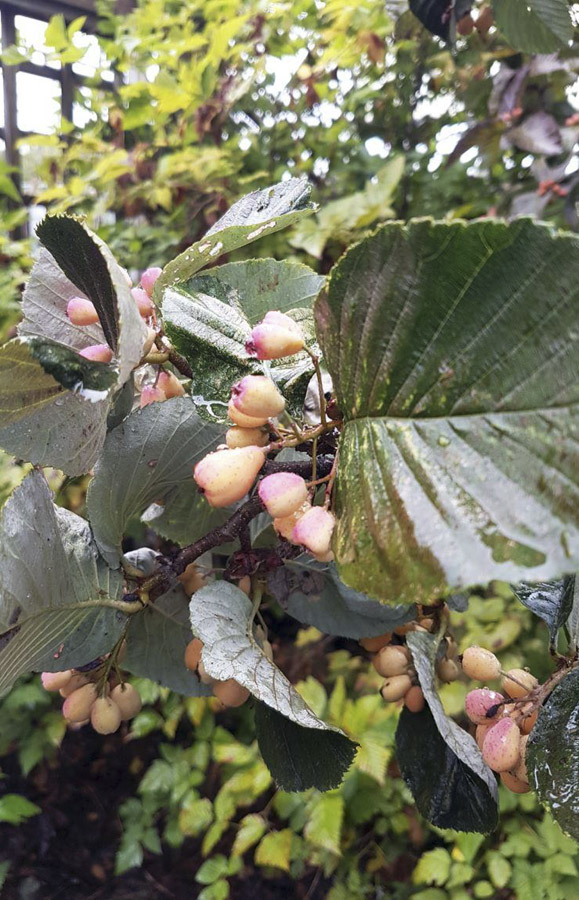 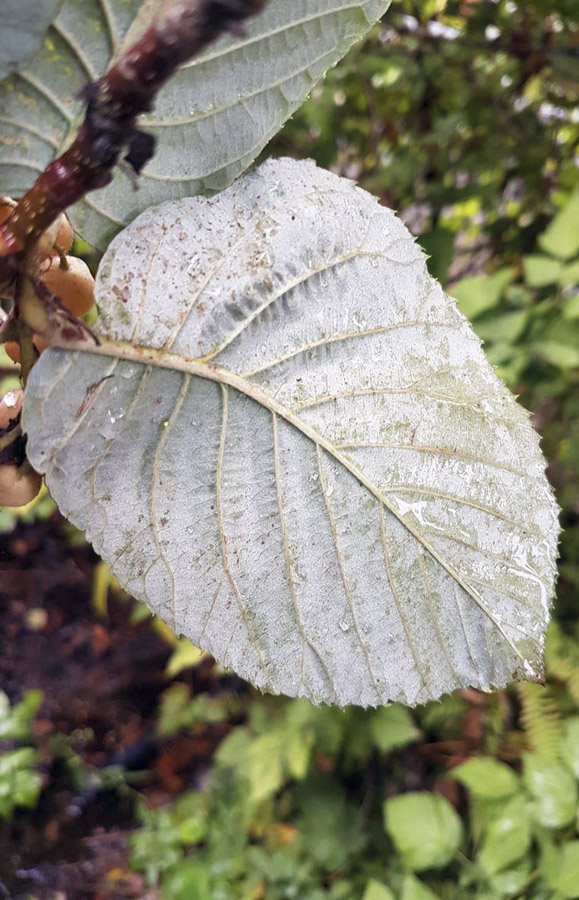 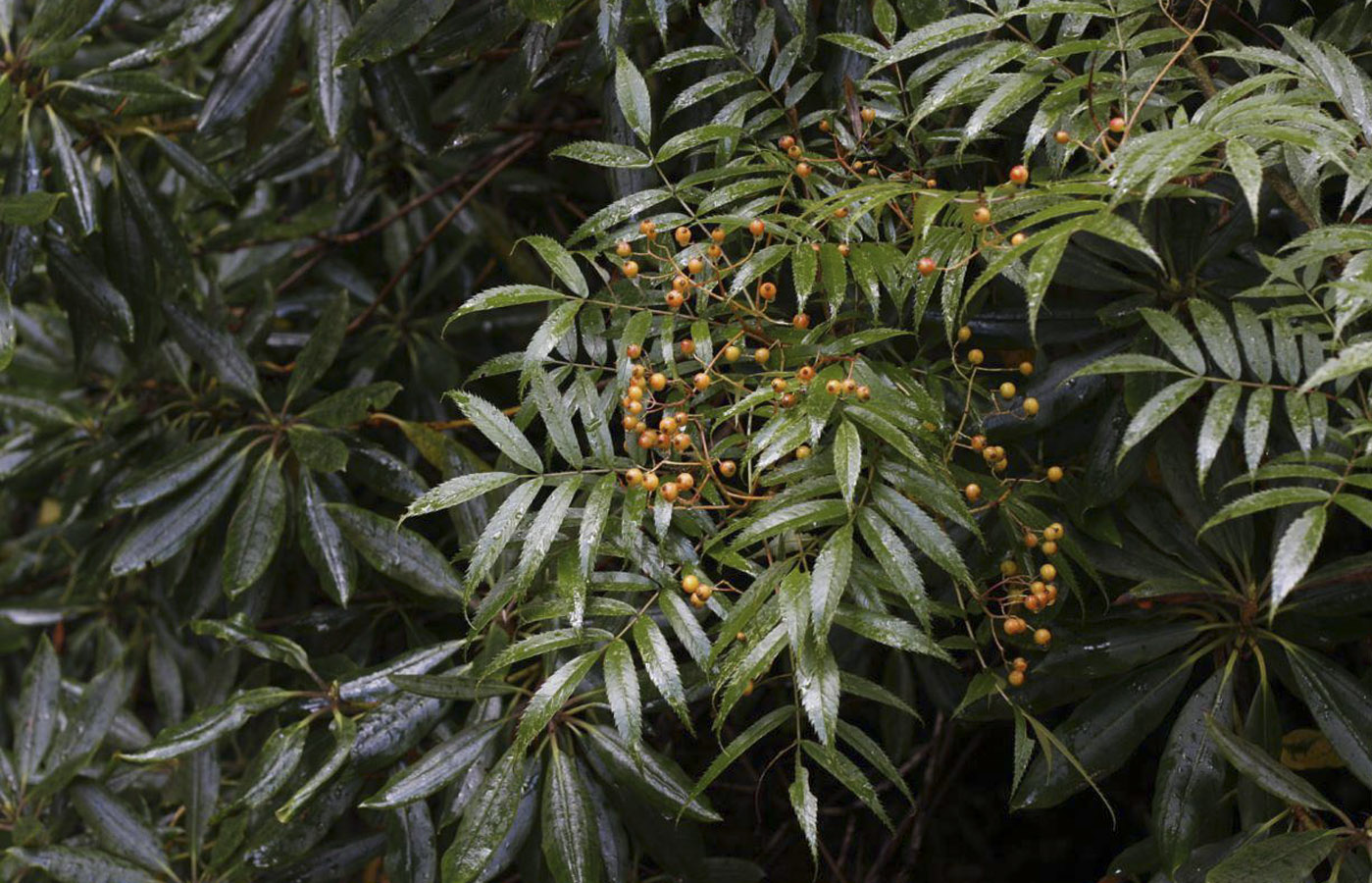 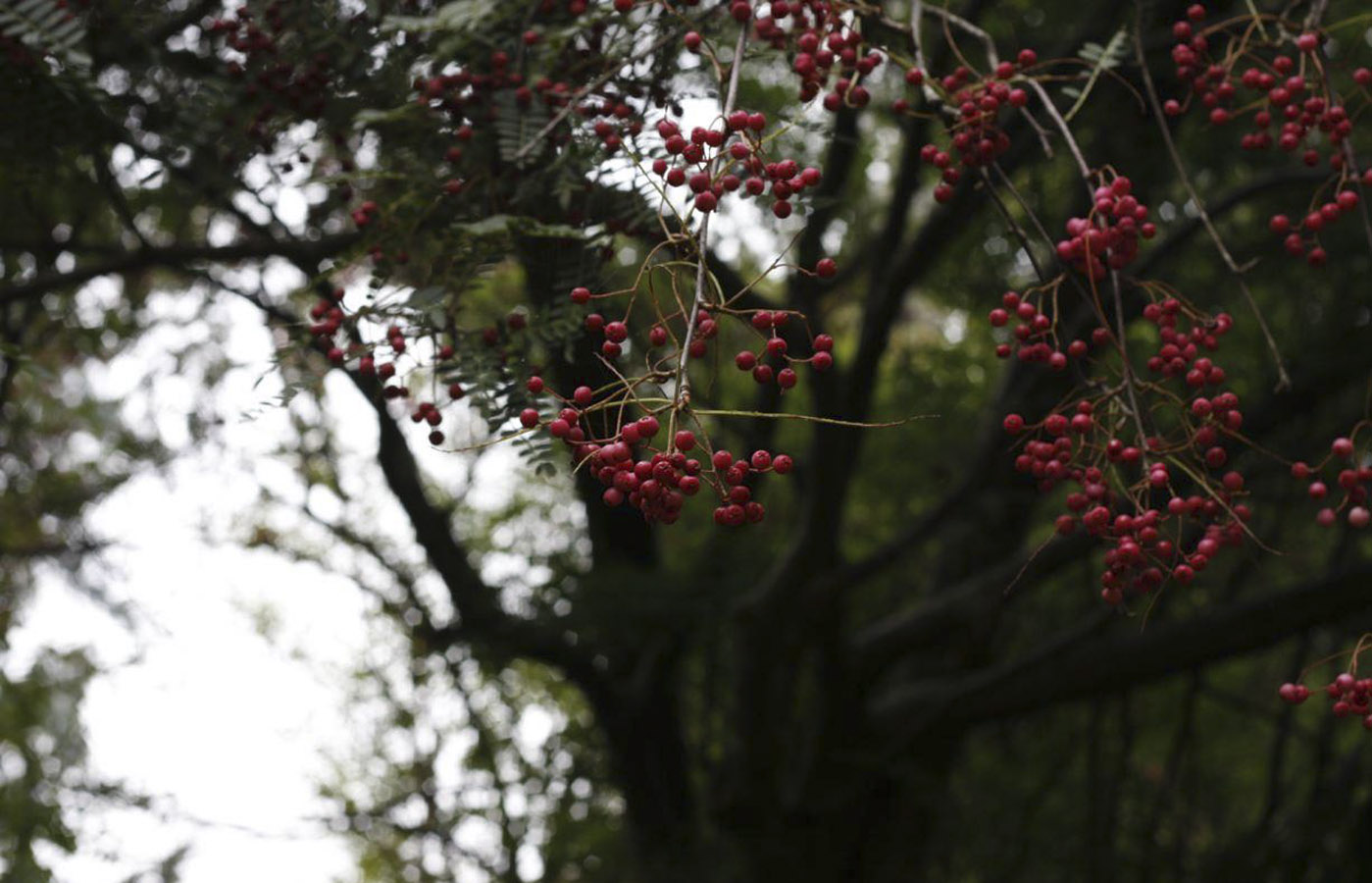