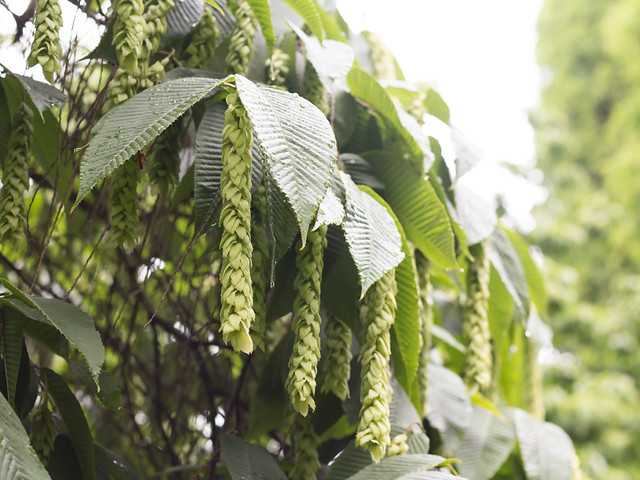 For more August photos visit our forums. Please feel free to post your own photos of the plants in our garden in this thread.

For many gardeners, summer is the time for finding ways to enjoy plants in the shade. Particularly when it’s very hot, flowers start taking a back seat to fruits, and while we traditionally associate autumn with fruits (apples, hawthorns, mountain ash, etc.), there are plenty of fruits that ripen in summer to keep us occupied on a shady walk in August. High on my list of summer fruiters are the hornbeams. Granted, these are dry fruits, and mostly yellowish green, but many are nevertheless attractive. Carpinus fangiana (Fang’s hornbeam) is difficult to miss in the David C. Lam Asian Garden. This deciduous tree, which is also known as the monkey-tail hornbeam, has extraordinary leaves and fruits. This species is from the mountains of central and western China and has the showiest seed-catkins of all hornbeams—long, green then straw-coloured “tails” up to 30 cm long. The leaves of this species are also unusually large for hornbeam (up to 20 cm long). There is a magnificent specimen visible from Upper Asian Way a few metres inside the Garden entrance and a number of others throughout the Asian Garden. Another hornbeam from the mountains of Taiwan, a kind of miniature version of Fang’s hornbeam, is C. rankanensis. Named for the now vanished village of Rankan-zan in Taiwan’s mountainous northeast, this species has long, narrow leaves with deeply impressed veins, prominent marginal serrations, and finger-sized drooping seed catkins. This species is visible from Lower Asian Way on Farrer Trail.

Keeping with the theme of attractive dry fruits, there are several maples in the Botanical Garden whose fruits could be considered showy. The Carolinian Forest Garden houses several maple species, including Acer spicatum (mountain maple), which is indigenous through western Newfoundland to Saskatchewan and the northeastern United States. Mountain maple is one of a small number of maple species that produce flowers on upright candle-like stalks. Once the characteristic two-winged fruits develop, they typically sit above the foliage where they burnish red in the sun. There are several plants in the beds near the top of the hill. Another maple with upright flower stalks, only distantly related and located in the Asian Garden, is Acer erianthum, which has more broad-spreading and more pinkish-red wings. There is an older plant on Rock Trail near Forrest Trail. The maple fruit is technically called a schizocarp (schizo = split + carpum = fruit) and is made up two samaras (winged fruits) that split apart when ripe. Our native vine maple, Acer circinatum, typically produces a few deep red samaras. As the days shorten, the red in both the samaras and the leaves becomes more and more evident. There is a particularly fine specimen near the entrance to the BC Rainforest Garden. A related species back in the Asian Garden, is Acer palmatum, the smooth Japanese maple. We have several wild collections of this species, but our cultivar ‘Ozakasuki’, which is a huge plant located between Fortune and Henry Trail east of Upper Asian Way is adorned with hundreds of sparkling violet-red samaras every year at this time.

Finally, it’s worth mentioning that this has been a particularly good year for fruits, all around, and those on Rehderodendron macrocarpum (Rehder’s sausage tree) are particularly bountiful. The species is a rare, spreading tree from southern China and Vietnam, noted for its lemon-scented white flowers and ribbed, sausage-like fruit. The name commemorates the famous German-American botanist, Alfred Rehder and the large woody fruits of this tree (macro = big + carpum = fruit). When ripe (in August), these 8-cm-long oblong fruits are bright scarlet. Our sizeable population of eastern grey squirrels is responsible for burying a high proportion of the fruits, and from the forgotten caches, we sometimes see seedling plants.