The Hortline celebrates its 40th official anniversary this year! To celebrate, recent graduate and Garden marketing assistant Shalini Nanayakkara catches up with Hortline co-founder David Tarrant and current Chair Ronda Tuyp to learn more about the service’s history and its value to the plant-loving community. 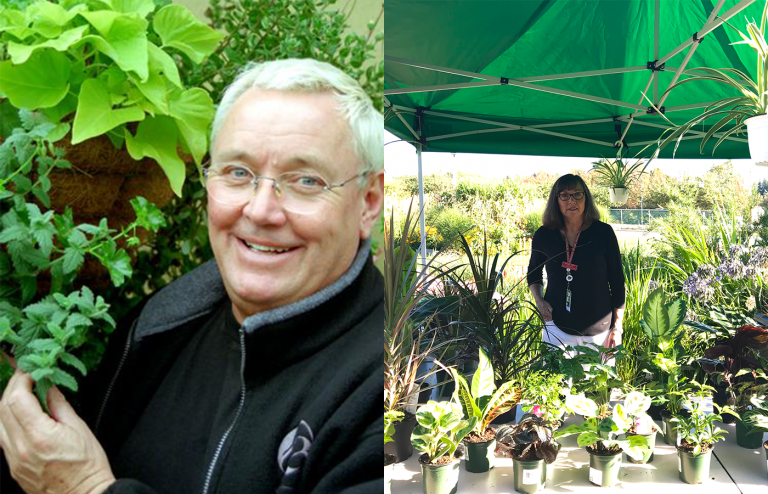 Have you encountered an unusual flower cropping up in your garden, struggled with a difficult growing season, or don’t know which plants are right for your space? Chances are the Hortline Advice service at UBC Botanical Garden could help you out.

This expert advice line celebrates its 40th anniversary this year but has served the Greater Vancouver gardening community for much longer than that.

Co-founder David Tarrant worked with the Hortline in the 1970s and ’80s, and current Chair Ronda Tuyp from the ’90s to present day. Surprisingly, they share similar stories and reasons for why folks keep coming back to the Hortline. It’s a trusted service and an opportunity for human connection, whether it be over the phone, in person, or (most recently) by email.

Read on to learn more about the Hortline, its history and the fascinating people and stories behind it. 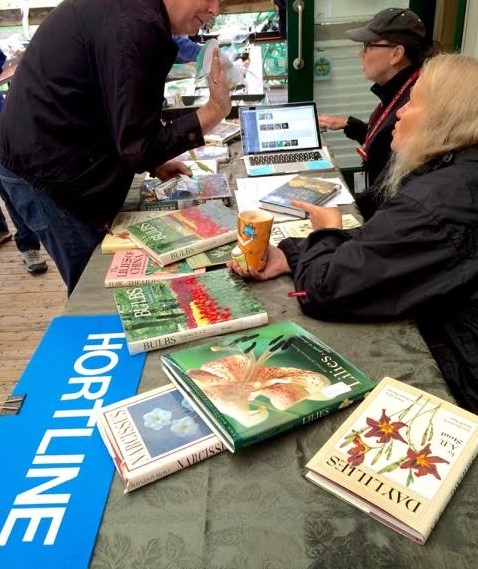 Similar to the UBC Botanical Garden Forums (which also celebrates its 20th anniversary this year) the Hortline is a familiar—and reassuring—resource for BC gardeners.

The first of its kind in Greater Vancouver, the Hortline is a telephone, email, mail, and in-person horticultural advice service run by Friends of UBC Botanical Garden (FOG) volunteers. FOGs, often Master Gardeners in their own right, answer queries by phone every Wednesday from 12pm-3pm and throughout the week via email. The service also accepts plant samples to help solve inquirer’s quandaries.

Questions can range from plant identification to diagnosing pests and diseases, to gardening and landscape advice.

But, as I learned from speaking with Hortline founder David Tarrant and lead FOG Ronda Tuyp, the value of the service extends beyond personalized advice on plant inquiries. The Hortline has also become a precious opportunity for people to connect with others.

How did the Hortline start?

While the Hortline committee was officially founded in 1981 by David Tarrant and Judy Newton, the Hortline story actually began in 1973. 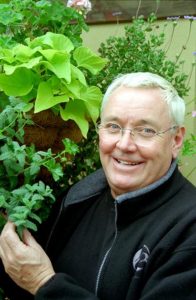 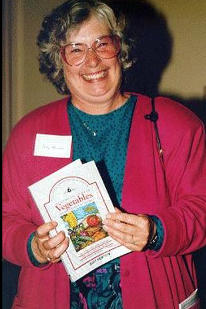 In the 1970s, Gardening became an increasingly popular pursuit, and the need for gardening and horticultural advice grew wildly. The then-UBC Botanical Garden Director Dr. Roy Taylor saw this need. He enlisted David to start a service called the “Hortline” to provide advice for folks passionate about gardening.

“Dr. Taylor was a man of vision, with his finger on the pulse of the educational possibilities of botanical gardens,” David says.

And so, on Thursday afternoons, David operated the Hortline as a one-man service. It was the first of its kind in Greater Vancouver.

The Hortline was lucky to have David Tarrant, a celebrated garden expert in his own right. Having immigrated from the UK in 1967, David hosted the CBC garden program Canadian Gardener, wrote for many horticultural publications and worked at UBC Botanical Garden for 37 years. Hortline volunteer Ronda Tuyp remarks, “he is, without a doubt, a garden celebrity.”

Now retired and living in sunny Mexico, David is a buoyant and friendly man with a magnetic dedication to plants and educating gardeners. The sparkle in his eye never leaves as he shares his stories with me over Zoom.

David and his Hortline colleague Judy Newton saw many office jumps at the beginning. From UBC Hut M34 on West Mall to a room in the Norman MacKenzie House (President’s Residence), to a long-gone building near the Museum of Anthropology where female UBC students once took “home management” classes, the two-person team was jettisoned from place to place.

At that point, UBC Botanical Garden wasn’t yet under any faculty. “We were an academic service department,” Tarrant explains.

And for a short time, the Hortline went mobile. Through a government grant, the Hortline truck was set up, stopping by garden-related events and activities in the Vancouver area. Pre-dating the Master Gardeners, staff and students were able to provide reliable gardening advice. 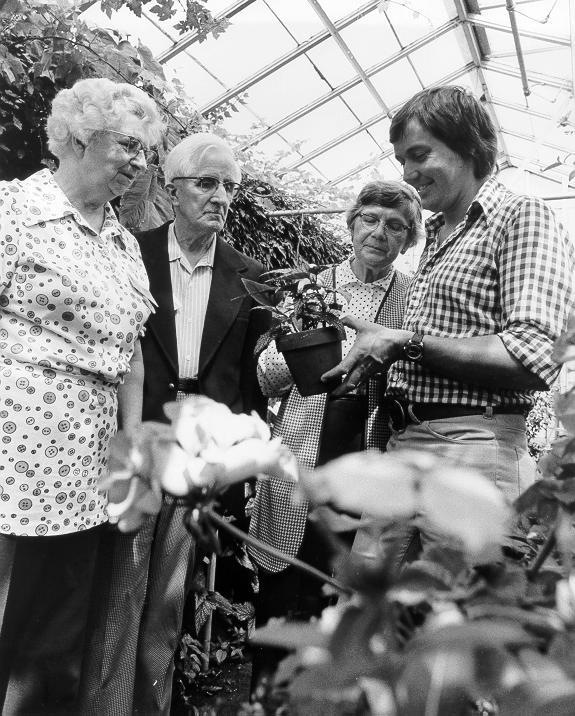 When asked if the questions or the community relationship changed since getting increased exposure, David shook his head. “The questions would be the same regardless [of location],” he says. No matter where the service was situated, people were happy to bring along their plants and questions.

For years, David answered the phone. He became a friend to many of the frequent or even one-time callers. During a time before the Internet, calling the Hortline sometimes became an opportunity to connect with someone over the phone.

Callers would share histories and stories about their plants, sometimes only requiring a conversational interjection from David. “Then at the end of the story, they would say ‘Thank you for being so helpful!’” he says. “That always made me smile.”

According to David, the Hortline became successful over the decades because of two important reasons: at that time, it was a one-of-a-kind service that people could trust and, as part of the university’s botanical garden, it was also an “impartial place” to get the right advice.

Speaking to the Hortline’s presence today, David adds, “It’s still going strong. I’m amazed that people in this day and age of technology still [want to] call in.”

“I think it’s wonderful that they do, actually.”

A lot changed in the ’80s, when the Garden became part of the Faculty of Agricultural Sciences, Dr. Taylor moved on to direct Chicago Botanical Garden, and the FOGs were established. The Hortline permanently moved into the Campbell Building at UBC Botanical Garden in 1981, and the FOGs became involved and set up support service teams.

Until this final move, the Hortline operated from one little room by David and Judy. Now the Hortline is managed by 10 volunteers in its own office, with two libraries (the FOG library managed by Jenni Forbes and the Garden’s horticultural library collections) and the Garden staff for reference help.

In 1996, Ronda Tuyp took over as Chair of the Hortline from one of the very first ever FOGs, and June Ames, who was in her 90s when she stepped down from the position. 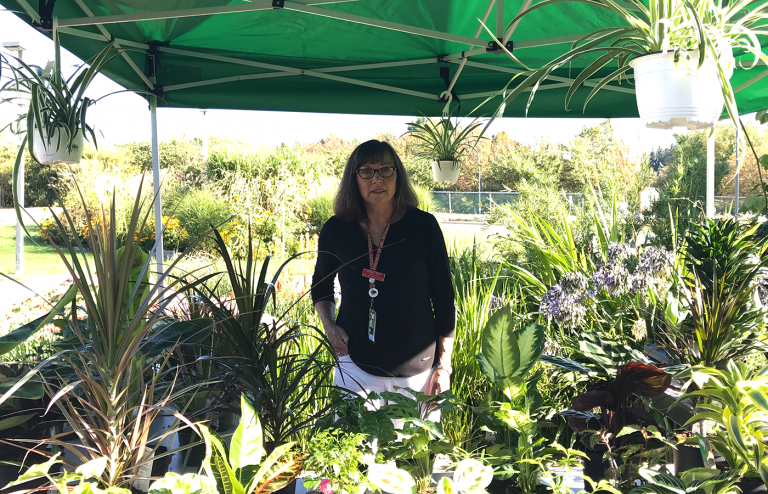 Ronda at the Shop’s Indoor Plant Sale in 2019. Photo by Kathy Shynkaryk.

When I speak with Ronda, it’s a Wednesday morning, just before her shift at the Shop in the Garden and Garden Centre. Ronda is lovely and a very involved member in the gardening community, generously taking the time to chat about the Hortline. Just like David, Ronda’s enthusiasm for plants and helping gardeners is crystal clear, even through a Zoom call.

“I became a Master Gardener before I became a FOG,” Ronda says. She learned about the Hortline from David, whom she met at a garden show.

When asked what part of getting involved with the Hortline appeals to her, Ronda answers, “Diagnosing problems, I find it intellectually challenging. That’s a very large part of the Master Gardener program…and I really wanted to put it to use. I love it. The questions are fascinating.” 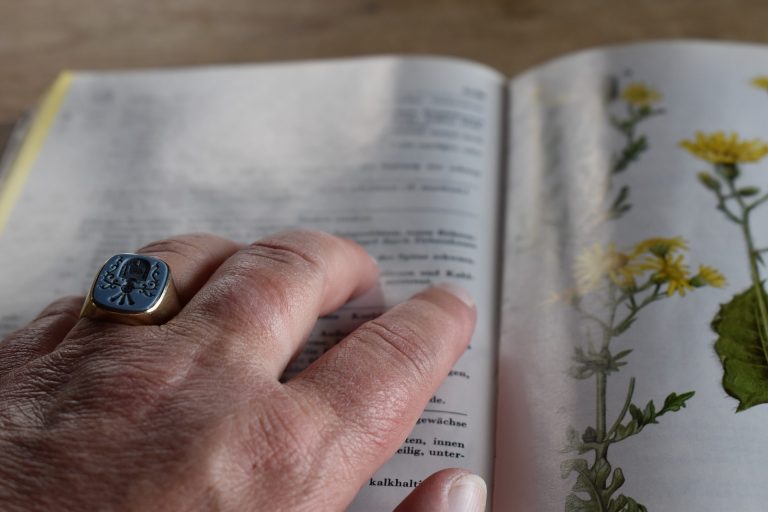 Hortline volunteers need to be well-versed in gardening and horticulture to answer questions.

How Does the Hortline Help Gardeners?

In 2017, the Hortline answered 428 questions via email, and 175 questions over the phone. Inquirers sent in a total of eleven plant samples to the Hortline office so volunteers could help identify the plant, pests or disease.

People most often ask the Hortline to help with identifying plants and their advice on which plants to grow in their gardens.

Ronda says Hortline volunteers need to ask a lot of questions to understand a person’s garden — but first they need to really understand gardening and horticulture in order to ask the right questions. And since volunteers do not recommend pesticides, they must provide reliable advice on sustainable gardening practices.

“You’re always learning. I still find out new things all the time.” 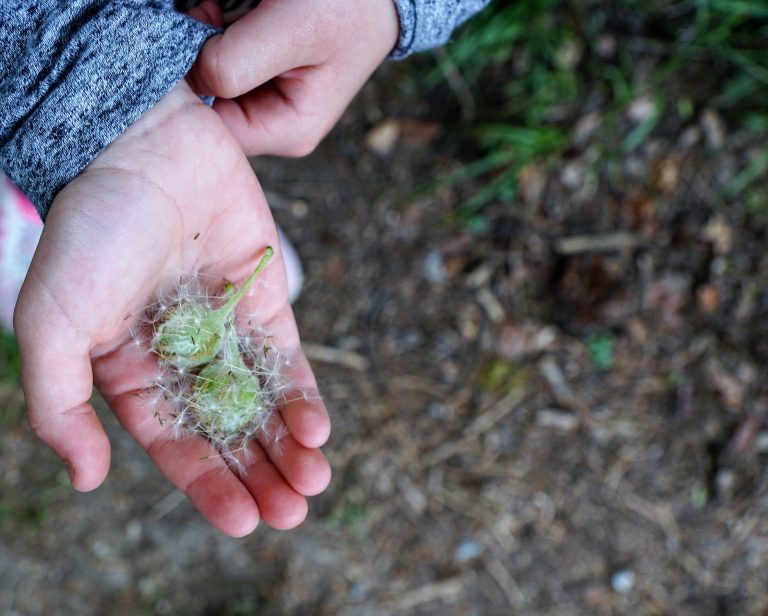 The Hortline helps identify plants and provide advice for gardening.

How Has the Service Changed Over the Years?

In the early years, inquirers could only call the Hortline. One volunteer would answer the phone and take down the question, while another volunteer would look up the answer in their reference materials. Folks would also come in during open hours with plants to identify or care for, or send in materials through the mail.

Now more often than not, people send emails with photos of the plants in question.

“People still bring samples in…or send them in an envelope,” Ronda adds. “A stick or stem of a tree, or a leaf, and they’re wrapped really carefully and covered in something to keep them moist. It’s really wonderful.” 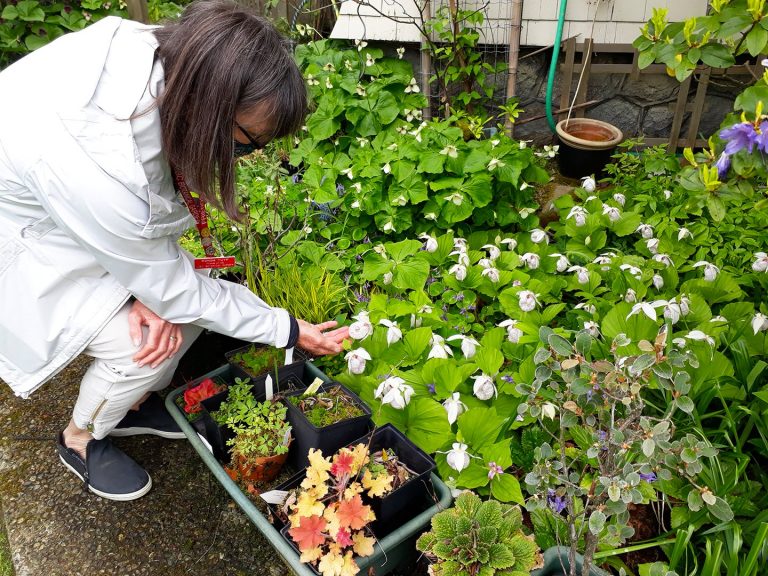 Ronda notes that even over email, the same connection between Hortline users, their plants, and Hortline volunteers remains.

“Gardeners are usually very passionate people. If they have a plant in their garden that is suffering…they really want to save this plant. They become very personal. We always have wonderful conversations.”

With a smile, Ronda admits that Hortline users, just as they did in David’s era, often tell the volunteers that the Hortline is a “most wonderful service” regardless of whether the inquiry was by phone or email.

“They say ‘it’s so nice to have someone to talk to, or respond back [in the case of email]’,” she explains. “It’s a very personal service.”

How Has the Pandemic Affected the Hortline?

Ronda estimates that the number of inquiries tripled over the pandemic, with folks having more time to garden during quarantine.

The Hortline have continued operations remotely, but during the early months of the pandemic, they couldn’t keep up. More volunteers were brought on, and Ronda is hopeful that the larger roster size will be a permanent change.

What Does the Future of the Hortline Look Like?

Ronda is grateful for all of the volunteers. This program’s success is only possible through the knowledgeable commitment of the seasoned FOGs who have been answering questions these many years: Jennifer Forbes, Shelagh Horner, Julie Lane Gay, Leslee Sinclair and Judy Schmidt. Thanks also to those newly arrived FOGs who have joined the team during the pandemic: Susan Askew Claudia Craig, Brenda Peterson and Bob Tuckey.

Garden staff have also been indispensable to the service as reference support. “The team owes a huge thank you to Douglas Justice [Associate Director, Horticulture & Collections] for his wealth of plant knowledge, identification expertise and his patience in assisting over the years,” Ronda says. Thanks also to Daniel Mosquin (Research Manager) and Eric La Fountaine (Accessions Technician) for their assistance. It really takes a community to run a service like the Hortline.

In these conversations with both David and Ronda, I realize that gardening, too, is not a solitary affair. When things don’t work out as planned or we need help, gardeners will reach out for human advice and assurance to tend to the issue.

As David says, “Plants and people, we’re all totally connected…it’s not two separate things. [Plants] are part of our everyday lives.”

As more people take up gardening and become enamoured with the wonderful world of plants, it’s easy to see how demand will continue for personalized service from trusted garden advisors, like those found at the Hortline. 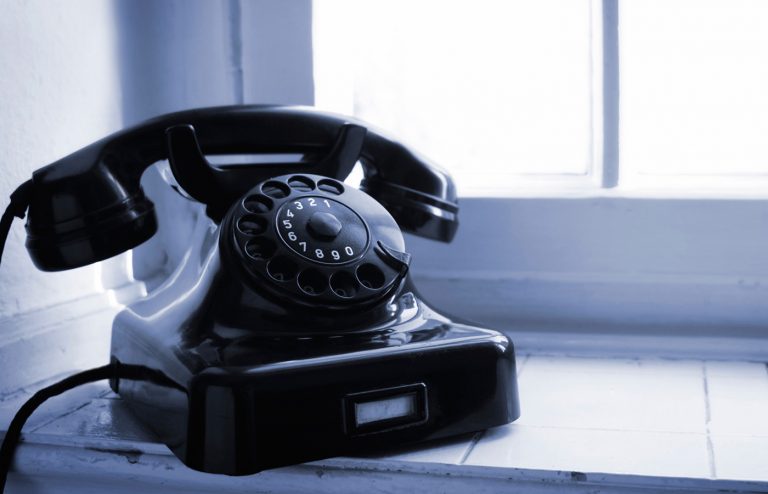 How Can I Get Involved with The Hortline?

Friends of UBC Botanical Garden (FOGs) are welcome to join the Hortline. If you aren’t yet a FOG member, you can learn more about this volunteering community and sign up here.

How Can I Get in Touch with The Hortline?

The Hortline is open to the public year round, seven days a week, and answered every Wednesday between 12:00 p.m. and 3:00 p.m. Questions are received by telephone, email, mail, and in-person at the Campbell Building at UBC Botanical Garden.

Once on-site events return, look out for the Hortline at annual Garden events!