» Home » Self-Propagating Plants and the Beauty of Regenerative Practices

Self-Propagating Plants and the Beauty of Regenerative Practices

“An Education in Propagation” is an ongoing blog post series by Dr. Erin Despard, Artist in Residence at UBC Botanical Garden, exploring the fascinating relationships between people, plants and the methods and technologies used to grow them. Read the Part 1 and Part 2 of this blog post series. 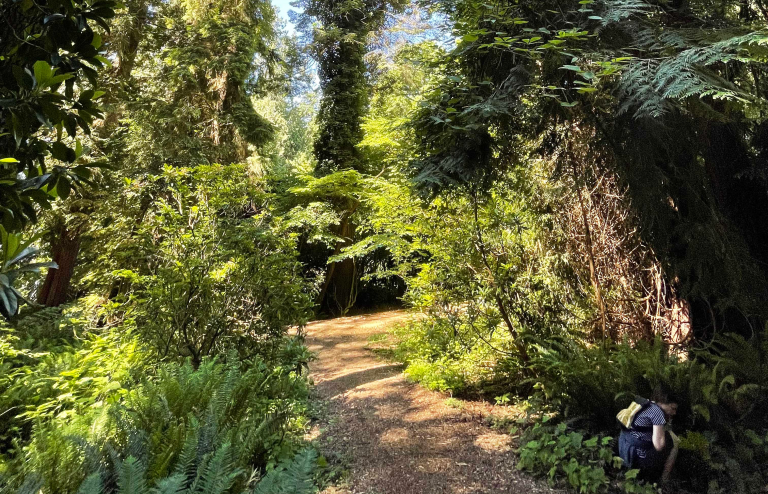 The propagation of plants is generally understood as an intentional process initiated or in some way managed by human beings, while the reproduction of plants is supposed to occur naturally, without intervention. In reality, when plants multiply, human intention and plant agency both tend to play a role, but with differing visibility depending on the setting and the methods.

Where plants reproduce freely, I like to use the term “self-propagation,” because it underscores the agency of the plants involved. But this does not mean that there is a lack of human intention shaping how that process unfolds. In fact, though it is often concealed, we can sometimes learn even more about relations between people and plants in these settings, than those where plant life is more carefully managed.

For example, because garden plants tend to be prevented from propagating themselves, or are at least controlled in the extent to which they do, self-propagating plants are often a sign that there has been a change in the way a given area is being managed. We are often quick to assume that this is due to negative factors, such as a decline of resources, but it can also be a sign of changing values and definitions of care, such as those associated with low-input gardening.

While we have known for a long time that less intensive garden maintenance regimes can support an increase in biodiversity and a decrease in consumption of water, fertilizers and fuel, our ways of seeing gardens are shaped by longstanding aesthetic traditions and perceptual habits that are hard to unlearn.

To see beauty in a garden that contains plants gone to seed, species traditionally considered ‘weeds’, or with large swaths of self-propagating plants (which may appear to some to be ‘out of control’), is a learning process—you have to look more closely and recognize new forms of meaning in the way the plants present themselves to you. 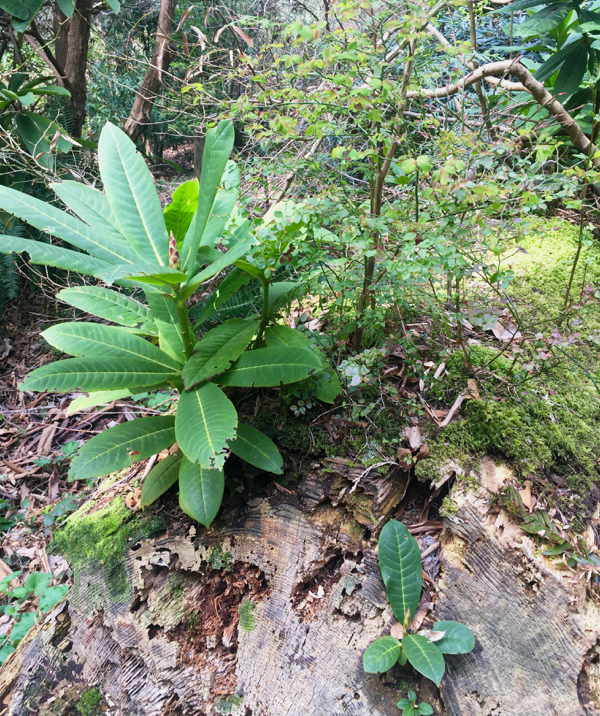 A log in the David C. Lam Asian Garden, playing host to self-seeded rhododendrons and other species (photo by Erin Despard).

There are many areas within UBC Botanical Garden where a choice has been made to decrease the intensity of certain maintenance practices in order to give a greater role to natural processes. For example, as discussed in a previous post, horticulturist Linda Layne is cultivating a “living mulch” in the food garden—one composed of beneficial weeds capable of cooling the soil, dampening weed growth and providing year-round forage to pollinators. Similarly, in his work to restore the Garry Oak Meadow Garden, curator Ben Stormes has planted large numbers of Plectritis congesta, or sea blush. This is an annual species that germinates in the fall, carpeting newly restored areas through the winter and flowering in early spring—all the while helping prevent the growth of unwanted weeds while newly planted perennials become established.

For visitors who know the broader ecological impact of these strategies and value their effects—seeing and hearing bees throughout the Garden, for example—this is an approach that renders the Garden both more beautiful and more interesting. There is so much to see once you start looking a little more closely! However, given that it is still somewhat unusual for public gardens to be maintained in this way, there is work to do in helping visitors to appreciate the somewhat subtler and variable forms of beauty that go along with this kind of approach.

Perhaps the best Garden area in which to explore and appreciate a less intensive maintenance regime is the David C. Lam Asian Garden, where curator Andy Hill has been pursuing a “regenerative” approach for the last ten years or so. This means that interventions are both gentler and less frequent, and there is a greater emphasis on observation. The goal is to permit the Garden to evolve over time and, as Andy puts it, “become the forest that it wants to be.”

Self-propagating native plants have a special role to play in the Asian Garden, for they are what carries it through the natural stages of succession. These plants capitalize on conditions in specific areas of the Garden and also change them over time, gradually making the soil and exposure more conducive to the species that will eventually succeed them.

Supported by a selective removal of unwanted exotic species by horticulturists, these native plants create a changing but increasingly resilient backdrop for the larger plants in the collection. At the same time, they help to make the Garden a site for study in multiple senses of the word. Not only can researchers visit the Asian Garden to observe plants not normally found in North America, but the Garden staff can learn a great deal from self-propagating plants about changing conditions in the Garden and the effects of interaction between different species and between plants and other life forms. 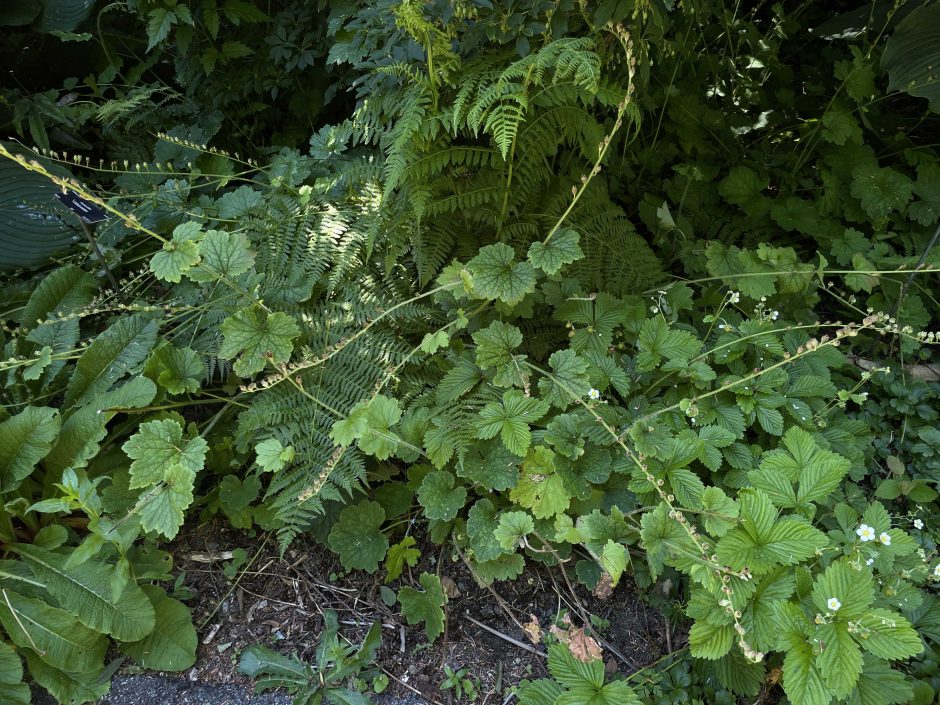 A mix of native and introduced ground covers in the Asian Garden (photo by Karen Yurkovich).

For example, as Andy explained to me, the presence of one kind of native species over another is often indicative of the soil composition or relative dampness at a given location, which can help to guide curatorial decisions about where plants in the collection will be most successfully sited. At the same time, self-propagating plants from the collection can produce hybrids never seen before, with qualities that can only be expressed when the plants are left to their own devices.

In general, Andy finds that when plants are permitted to create their own responses to conditions and events in the Garden, they often display a surprising capacity for regeneration and resilience. While the secondary effects of this agency can sometimes be negative—for example, when one plant out-competes another for sunlight—they are often positive.  As Andy pointed out to me, there are numerous species of woody vine that have grown very high into some of the large trees in the Garden. It is not always known ahead of time whether the tree can sustain the extent of this growth, so Andy watches them carefully. In addition to concluding that most trees will survive these incursions, he has observed that the vines provide exceptional habitat for certain animals. 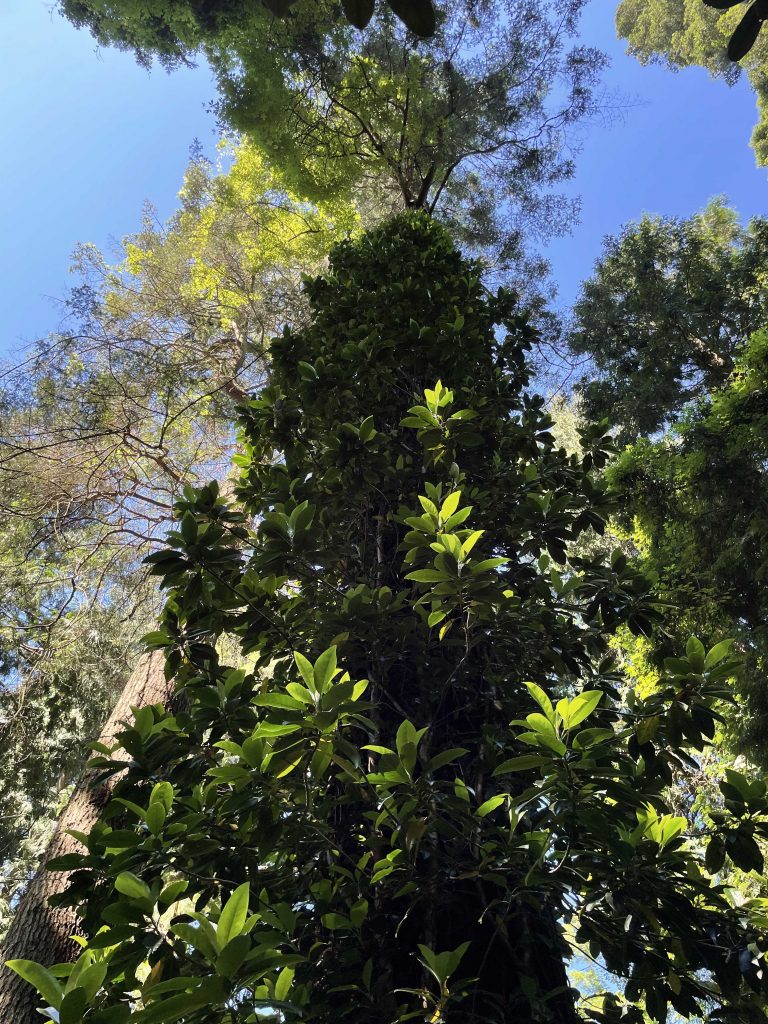 A climbing hydrangea vine growing up one of the Garden’s mature trees (photo by Karen Yurkovich).

Allowing plants to self-propagate and adapt to changing conditions is, therefore, not only a way to increase the ecological wellbeing of the Garden as a whole—it can also help us learn more about plants and the relationships that shape and sustain them.

Visiting the Garden with a knowledgeable guide such as Andy was a very good way for me to appreciate the multitude of benefits associated with a regenerative approach to maintaining the Garden’s collections. But you can also learn a lot by allowing the plants themselves to guide you. When you encounter a fallen tree in the Garden or gaze up into a tangle of vines that obscures the view of a particular tree, instead of asking yourself, “Do I like how this looks?” ask “What is happening here—what are these plants doing, and who else might be involved?” A wholly different way of seeing and experiencing gardens is waiting to be discovered.