November in the Garden 2021

Rhododendrons are generally known for their flowers but recognizing and celebrating them for their foliage is sometimes a better bet; flowers seldom last more than a few weeks, while leaves can often go on for years. There are plenty of species in the Botanical Garden that display interesting leaves.

I’m partial to leaves that change with the seasons and deciduous rhododendrons are an obvious way to recognize this dynamic element. Many judge the more common deciduous azaleas as vegetatively quite boring, but there are a number that are exceptional.

Spring and autumn colours complement the unusual leaf shape and open, twiggy habit of the spade-leaf azaleas such as R. reticulatum and the so-called umbrella rhododendrons R. schlippenbachii (royal azalea). These all colour in October and early November. Look for the royal azalea along Henry Trail east of Upper Asian Way and five-leaf azalea in the Asian Section of the E.H. Lohbrunner Alpine Garden.

Among evergreen rhododendrons, there are considerably more foliar attractions. Many of the heavily indumented species (indumentum is the natural, often matted hair that persists on the undersides of the leaves of many rhododendrons), such as R. bureavii (Forrest Trail) and R. recurvoides (Upper Asian Way east of Kingdon Ward Way), produce new growth entirely plastered with hairs. Eventually, the hairs wear off the upper leaf surface, leaving only the auburn felt beneath. The uncommon R. wallichii has downy-soft chocolate brown indumentum, remnants of which only remain on the upper surface into summer. There is a group of plants bordering Wharton Glade near Upper Asian Way.

A trick performed by a number of species involves indumentum on newly emerged leaves that changes to a completely different colour after a few months. In some forms of R. campanulatum, the spongy marshmallow-white indumentum, which is smartly set off by the red rims of the unrolling leaf margins and the waxen, metallic blue upper surface, eventually settles down to a more calming fawn colour. There is an image of this rhododendron on an interpretive sign on Lower Asian Way near Soulie Loop. Unfortunately, we lost this plant a few years ago, but have plans to acquire it again. Rhododendron wasonii (Upper Asian Way east of Kingdon Ward Way) changes its indumentum from ivory to an attractive rusty brown, but this species has an added bonus: the leaves smell surprisingly (and pleasantly) of camphor, cloves and soap, a satisfying consolation for a shy-to-flower species. Other species with beautiful leaves and olfactory appeal are quite common in this group (the subsection Taliensia) including R. traillianum (Upper Asian Way east of Kingdon Ward Way), which smells of camphor and peach soap. I do admit the aroma from these species is often somewhat elusive except on the newest growth. In the same group and in the same area of the Garden is the difficultly pronounced R. aganniphum var. flavorufum, which, gradually produces a peculiarly interrupted indumentum (see image).

Curiously, foliar fragrance is seldom mentioned in descriptions of rhododendrons. Do I only dream the sweet aroma of R. recurvoides? I find it subtle and fleeting compared with the former species, but it does make an impression. No matter: it also has beautiful, narrow leaves with veritable mattresses of lower surface indumentum and masses of glands on both leaves and stems. These glands are probably responsible for the aroma (if I’m not imagining it), but also exude a sticky material when handled. Interestingly, the glue seems to evaporate from the fingers, but remains sticky on the plant.

Strong aromas are common among lepidote (scaly) rhododendrons, and many smell, to my nose, at least, of varying combinations of camphor and bleach. For example, the late-flowering R. micranthum (Upper Asian Way between Staunton and Decaisne Trails) is noteworthy for its tiny flowers and diminutive foliage with its pleasant, spicy aroma, while R. groenlandicum (Labrador tea), quite reeks of bleach. There are several Labrador teas in the BC Rainforest Garden around the pond. Other small-leafed rhododendrons can pack a significant camphor punch—particularly, a number of the purple-flowered ones, such as R. fastigiatum, R. impeditum and R. hippophaeoides—all found in the Asian Section of the Alpine Garden.

Perhaps the most highly aromatic of rhododendrons are the cinnabarinums (R. cinnabarinum), smelling just this side of eucalyptus, and so strongly, it is said, that the aroma can bring on headaches in some people. Personally, I love the fragrance. For me, the crème-de-la-crème of rhododendrons is R. cinnabarinum subsp. xanthocodon Concatenans Group (on Kingdon Ward Way), with its wonderful aroma and extraordinary, dusty blue foliage. The flowers aren’t half bad, either, but you’ll have to wait for spring for those. 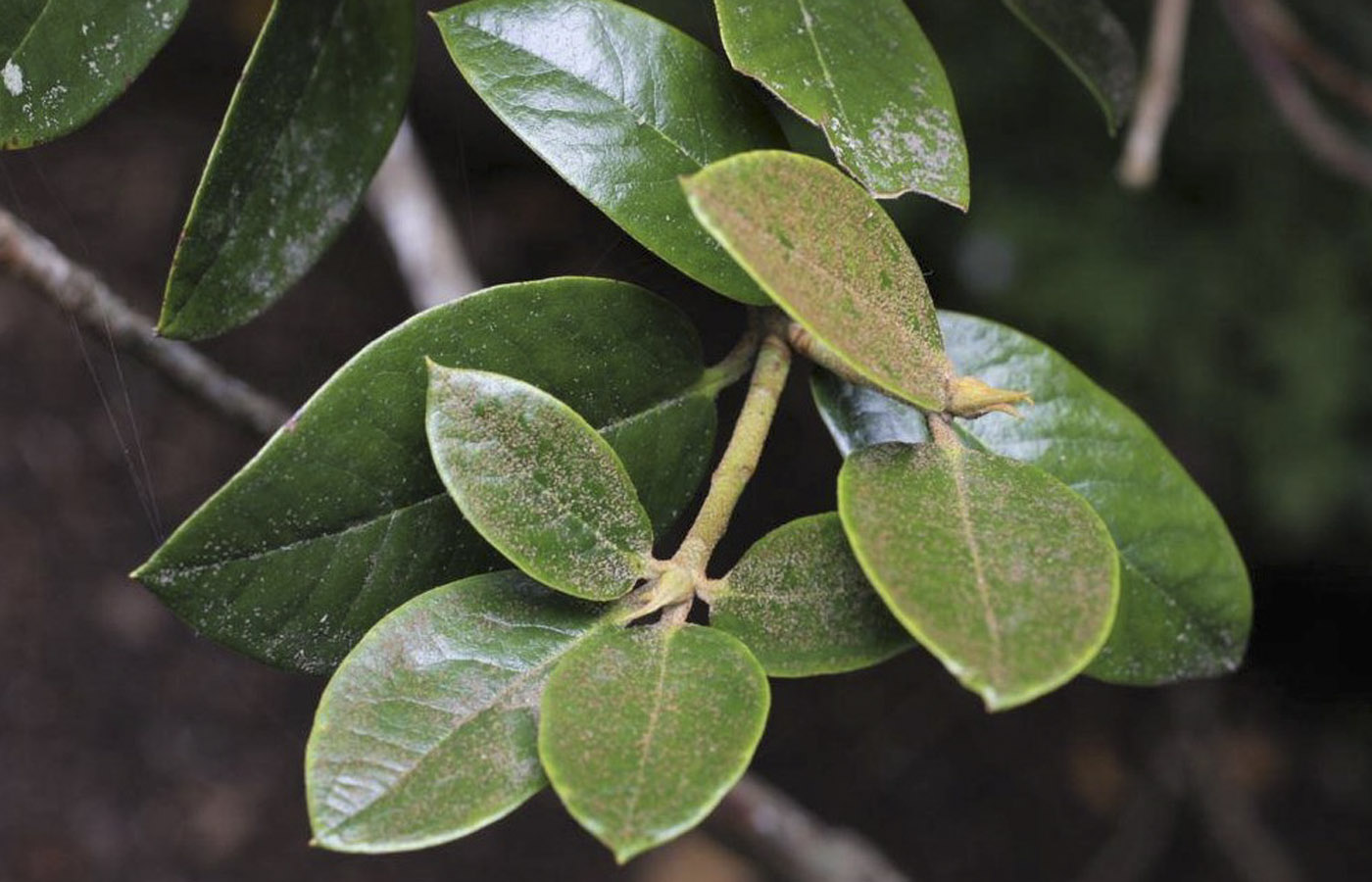 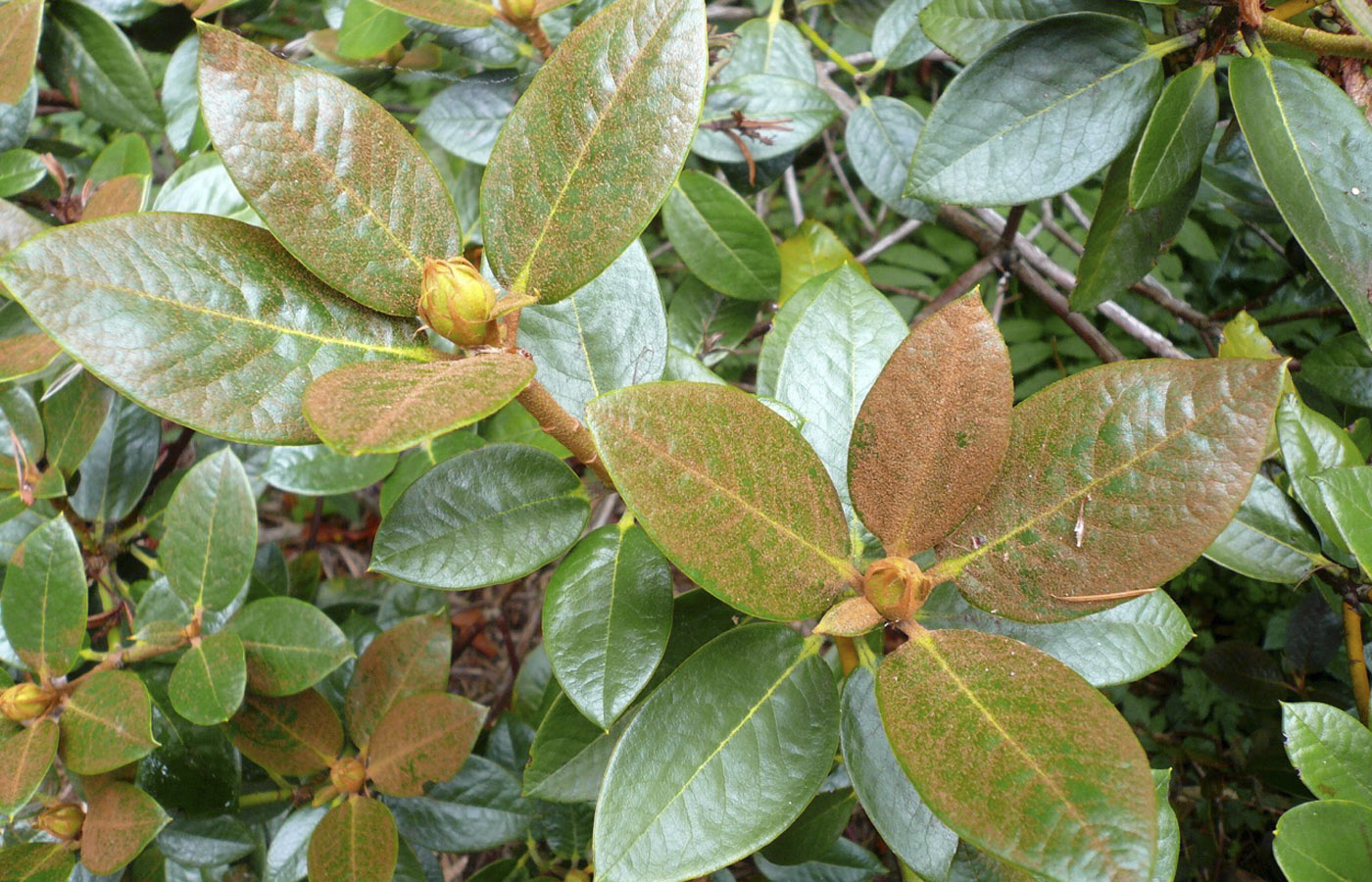 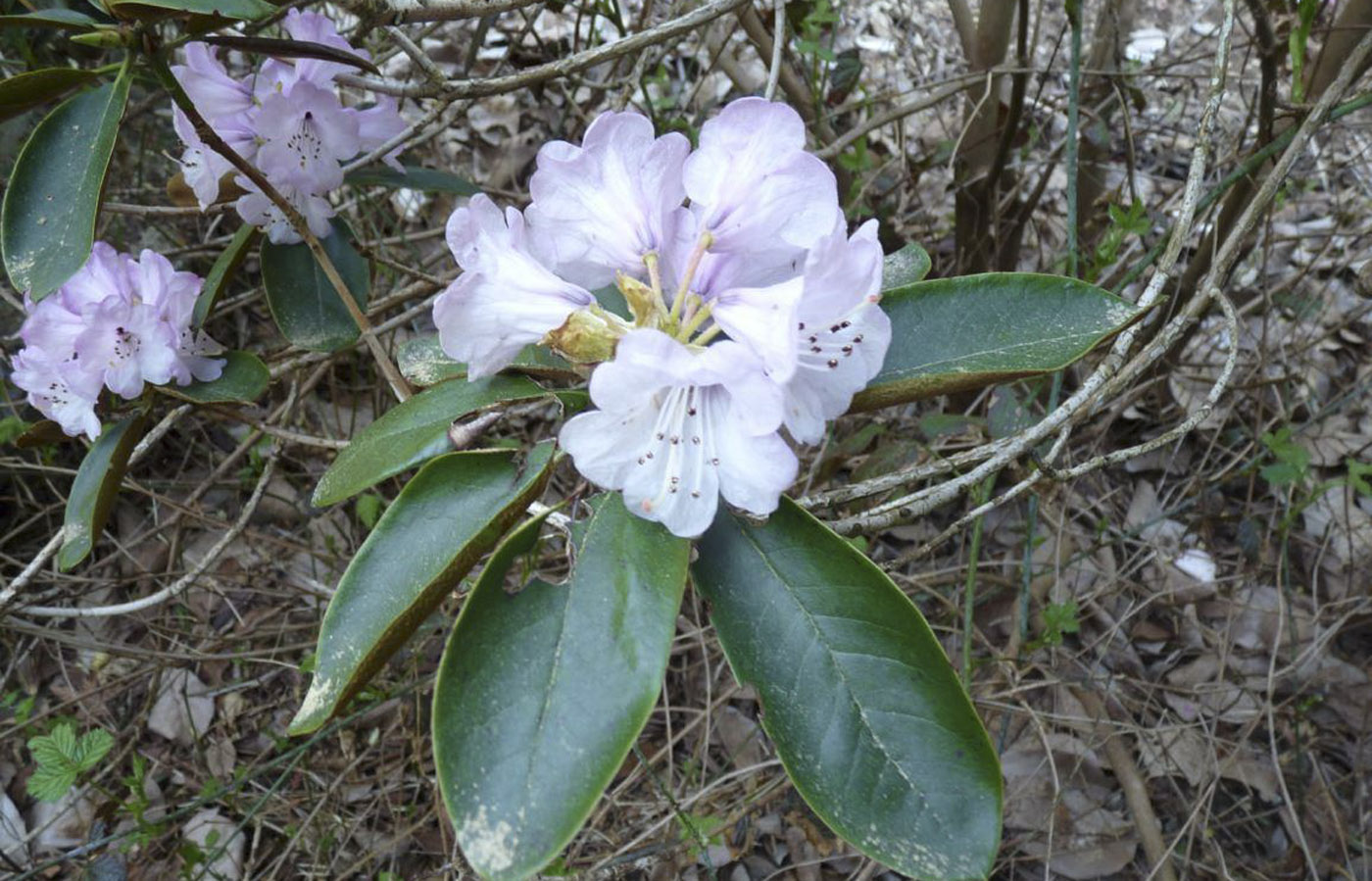 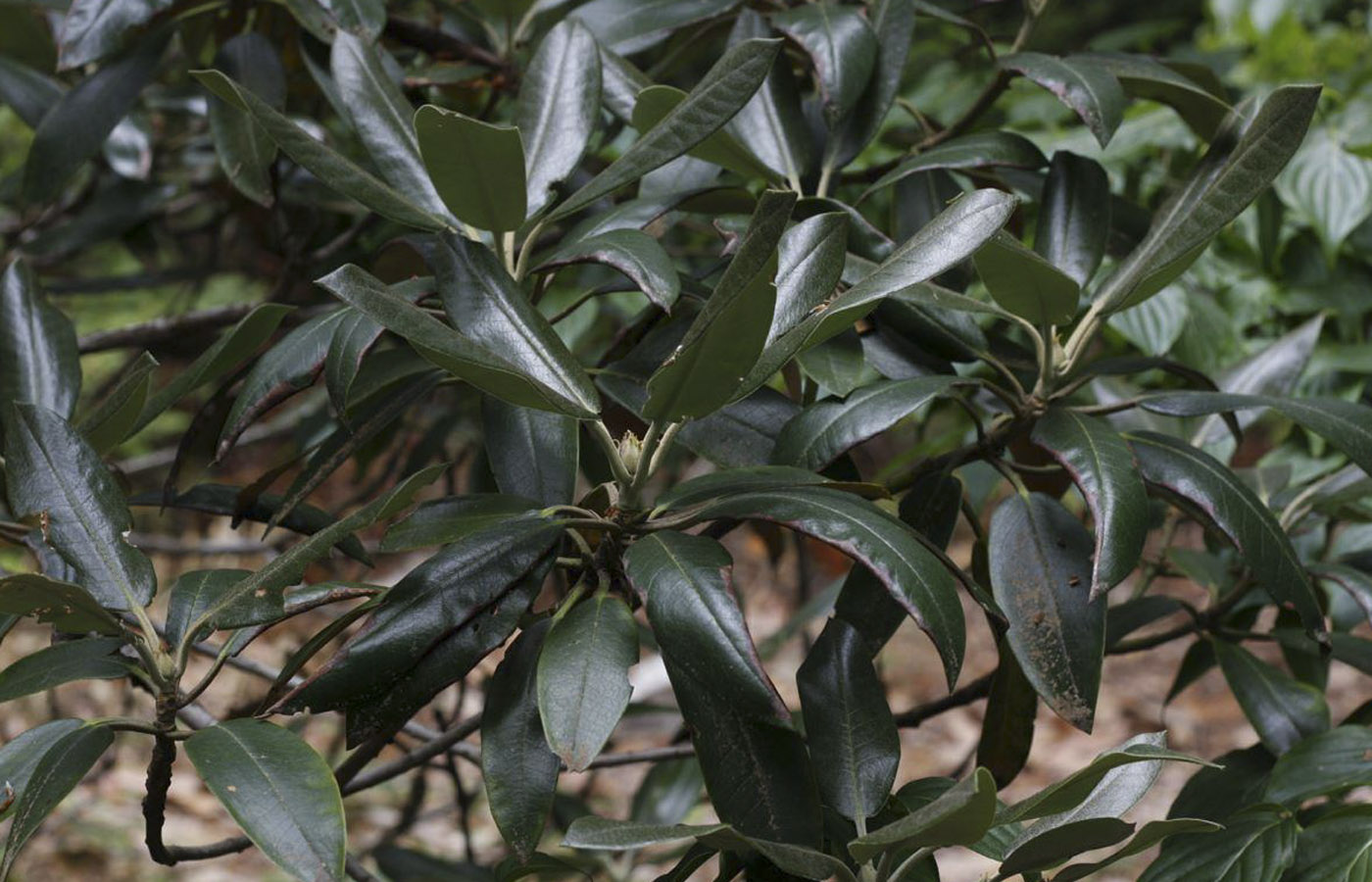 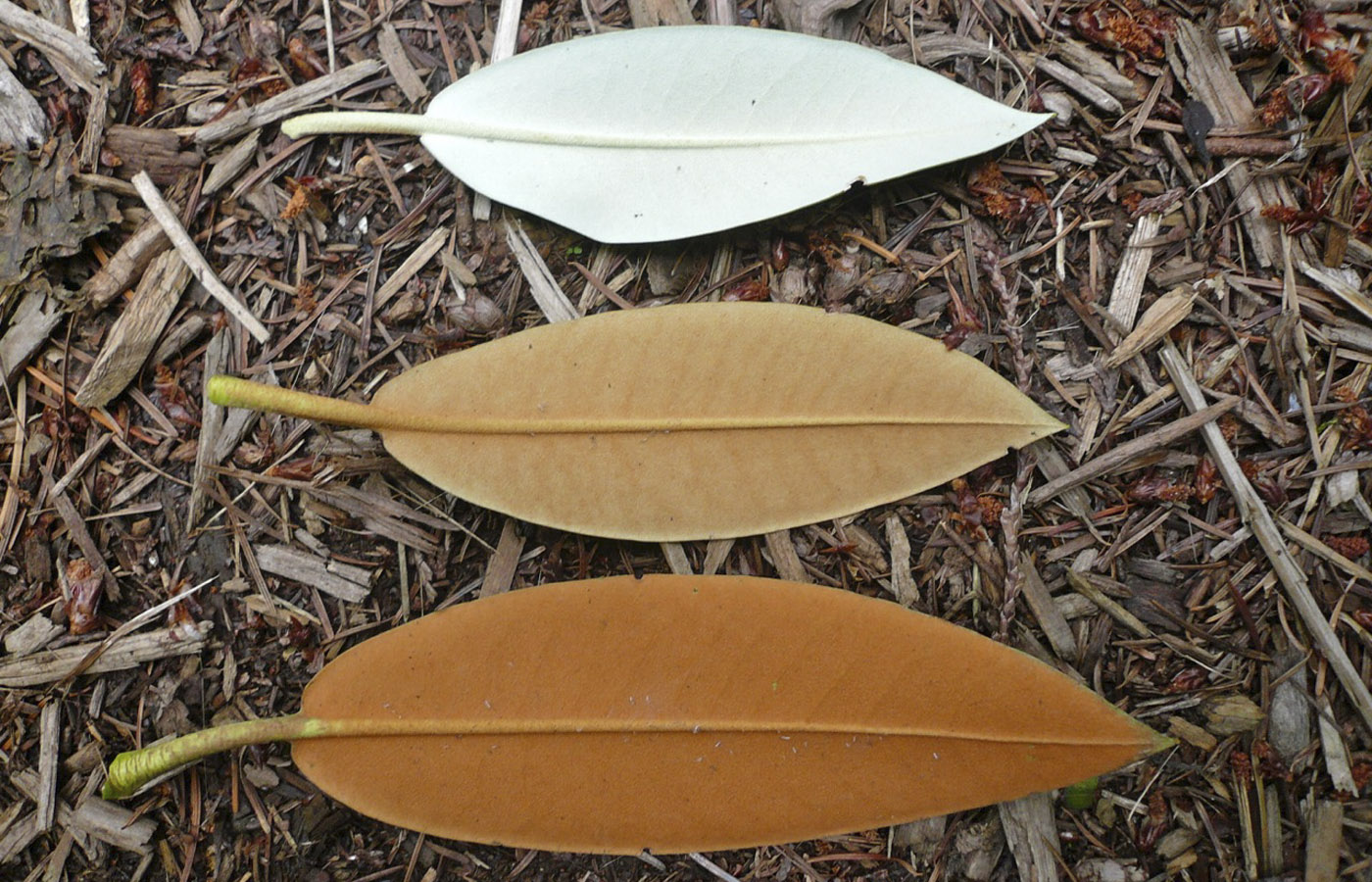 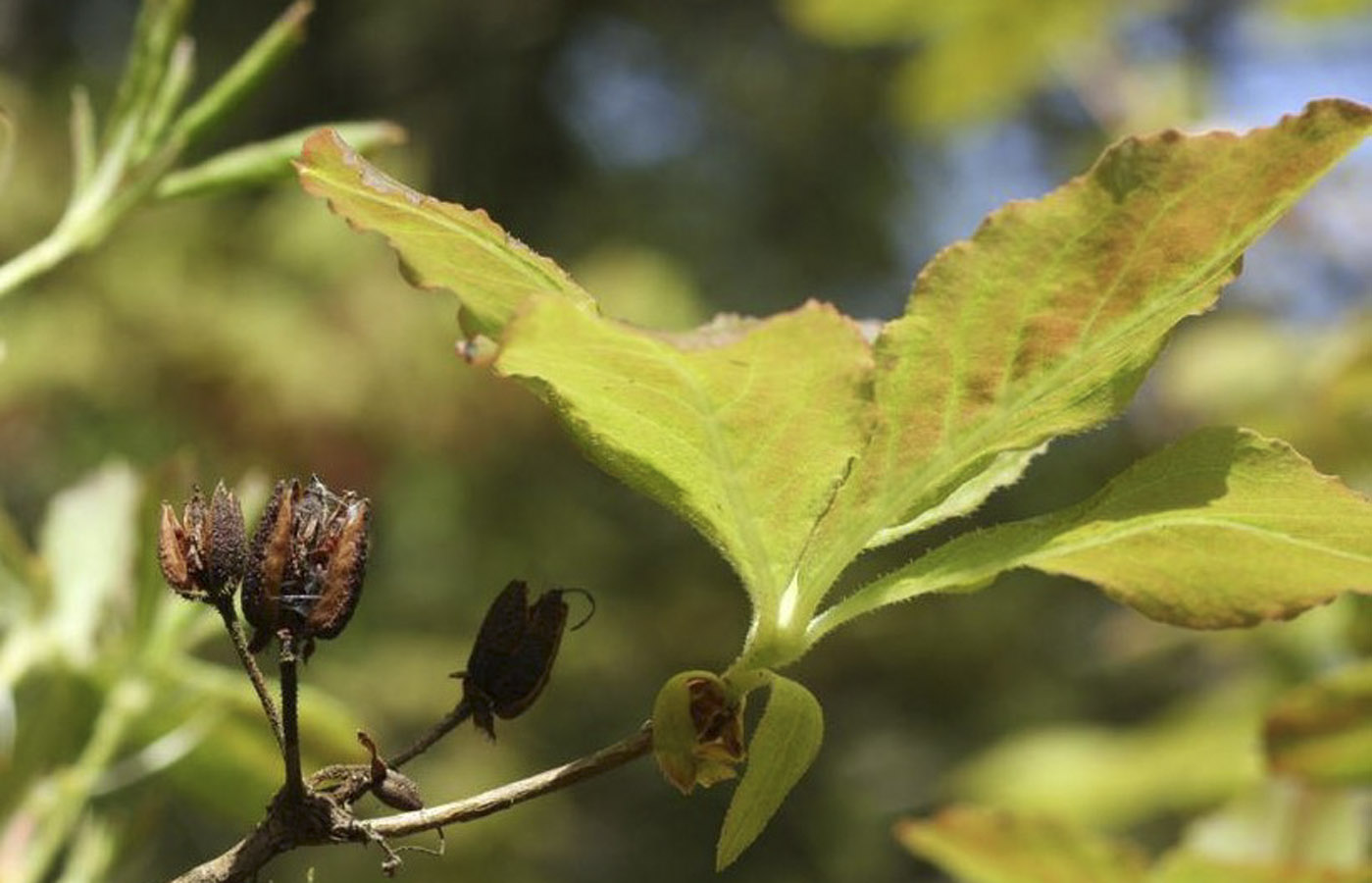 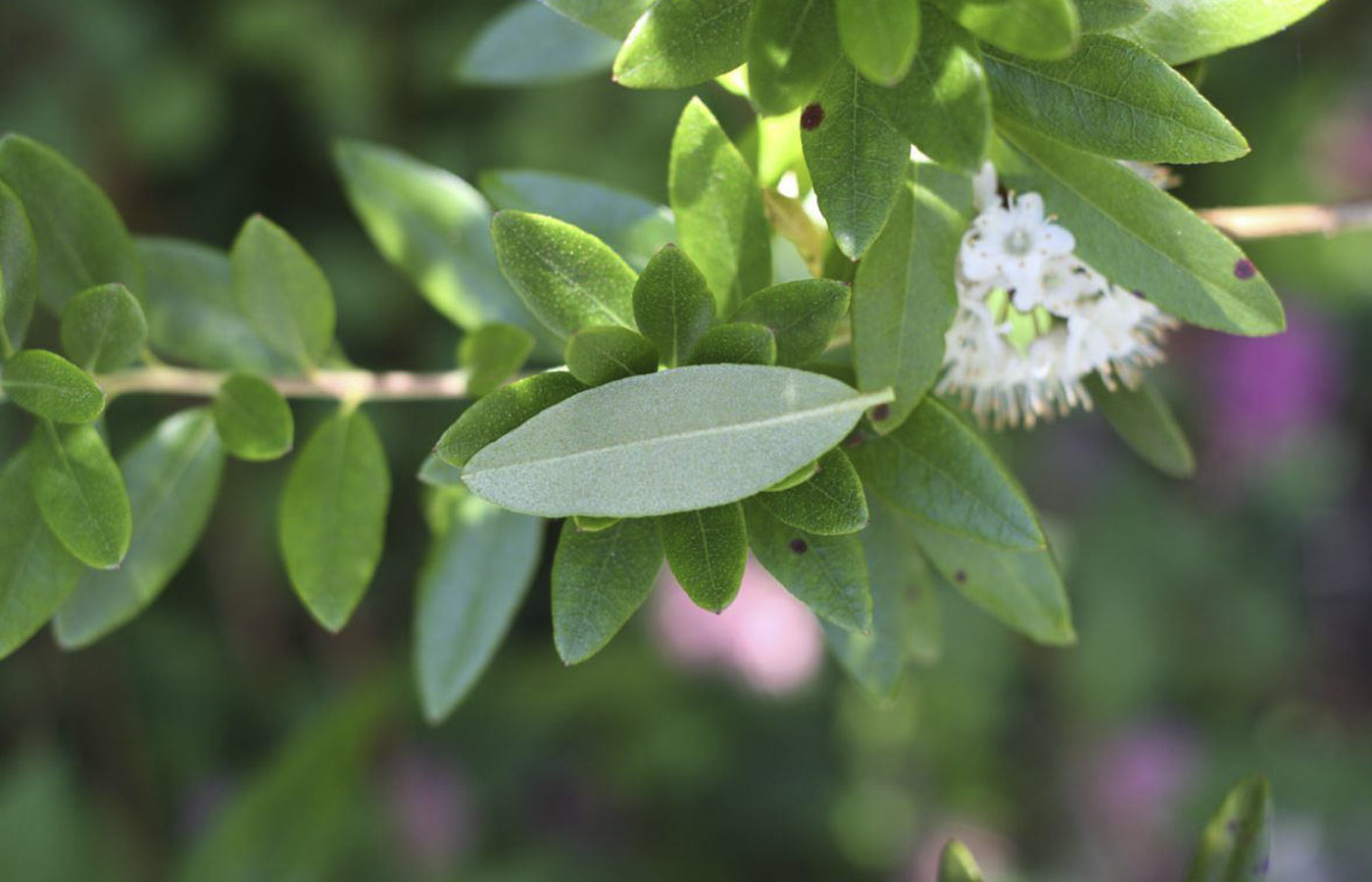 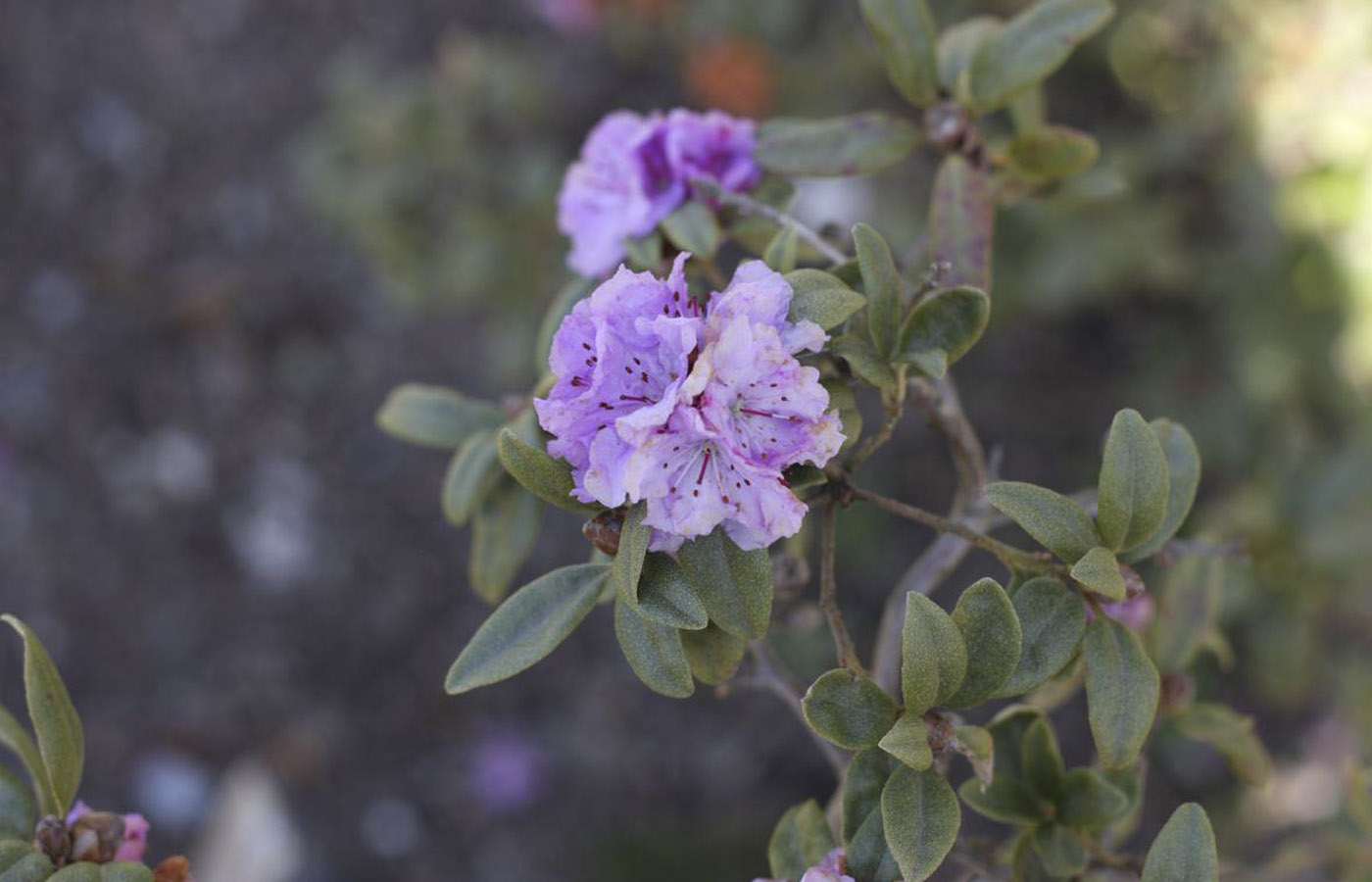 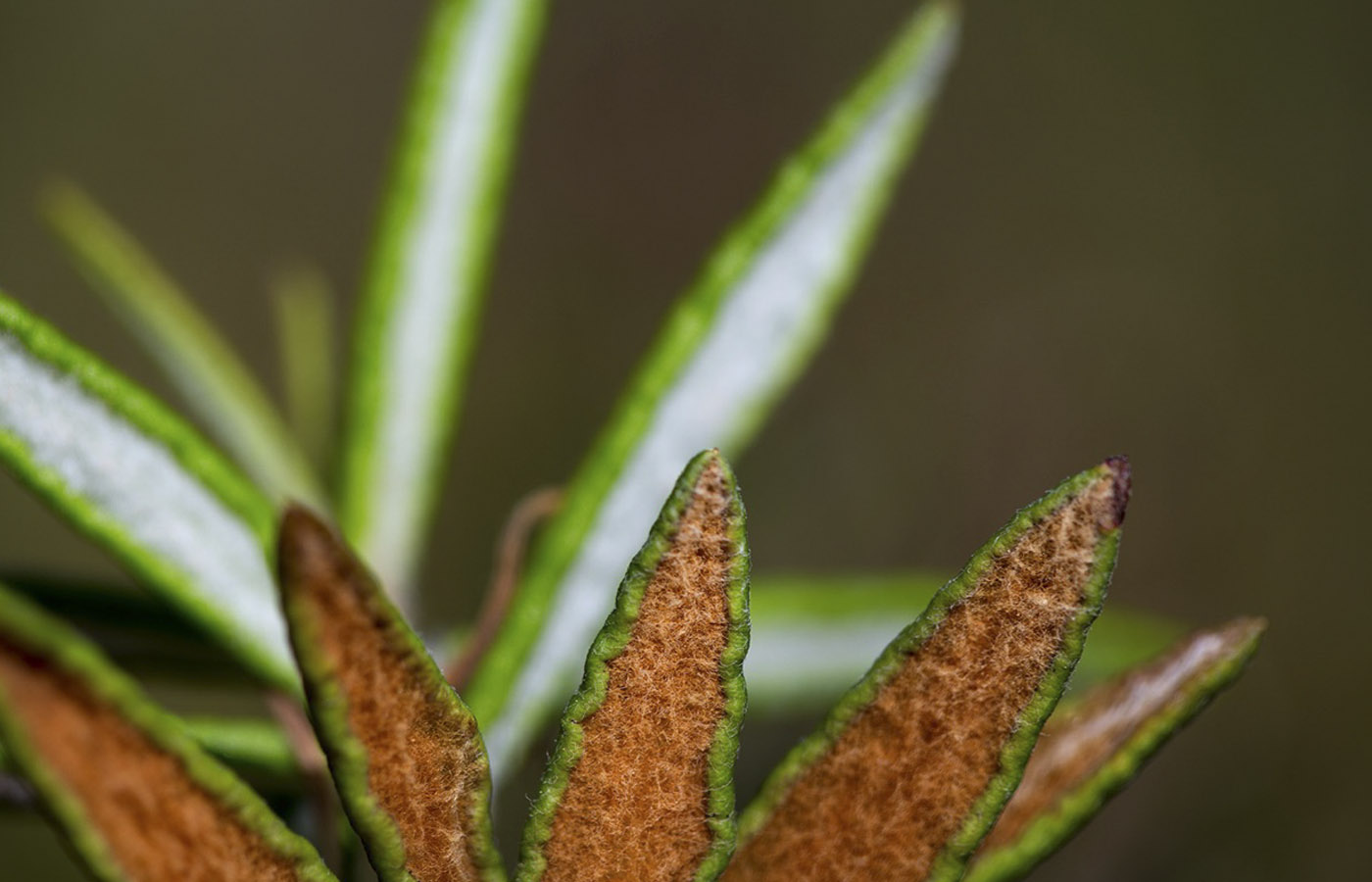 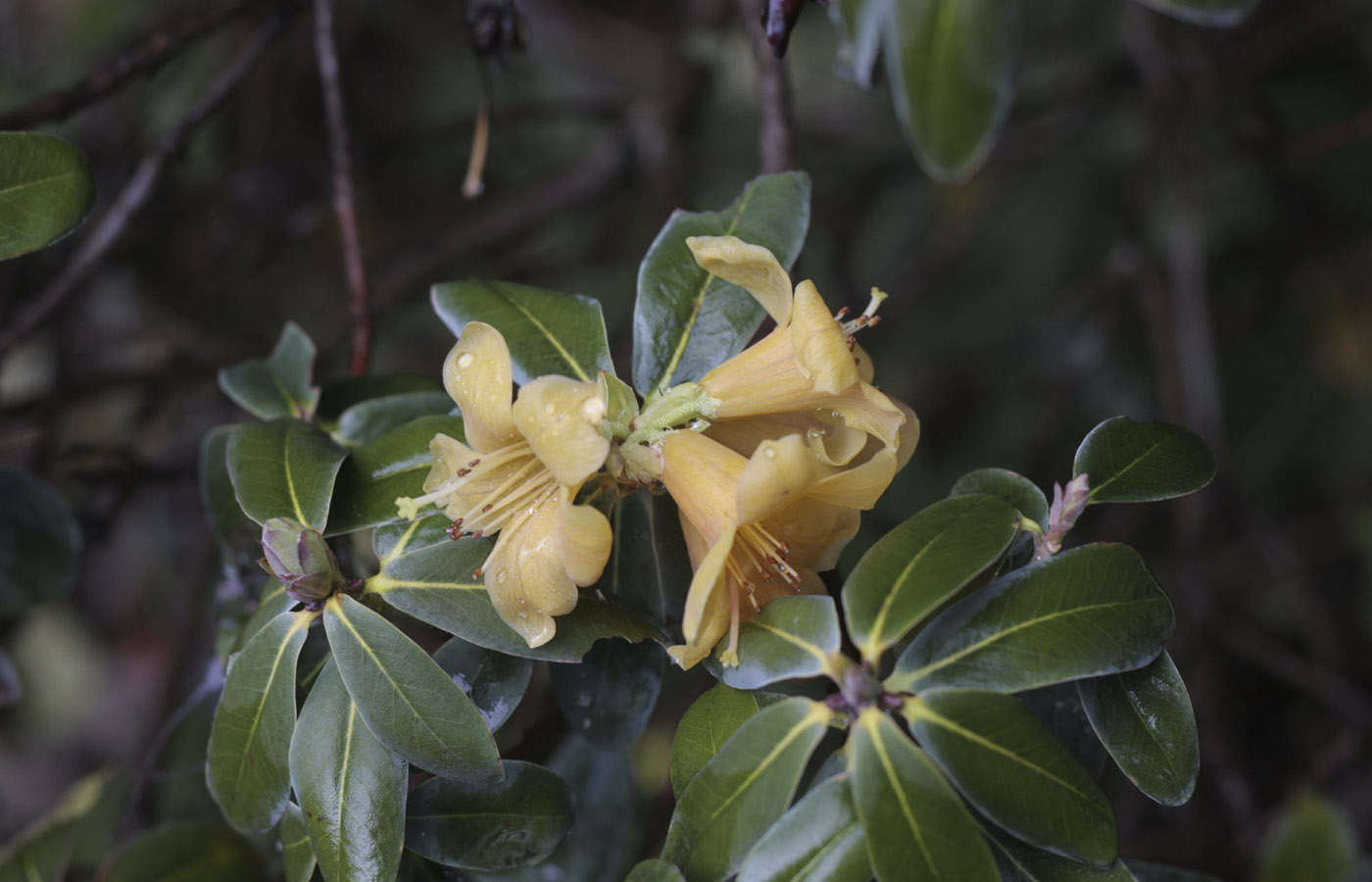 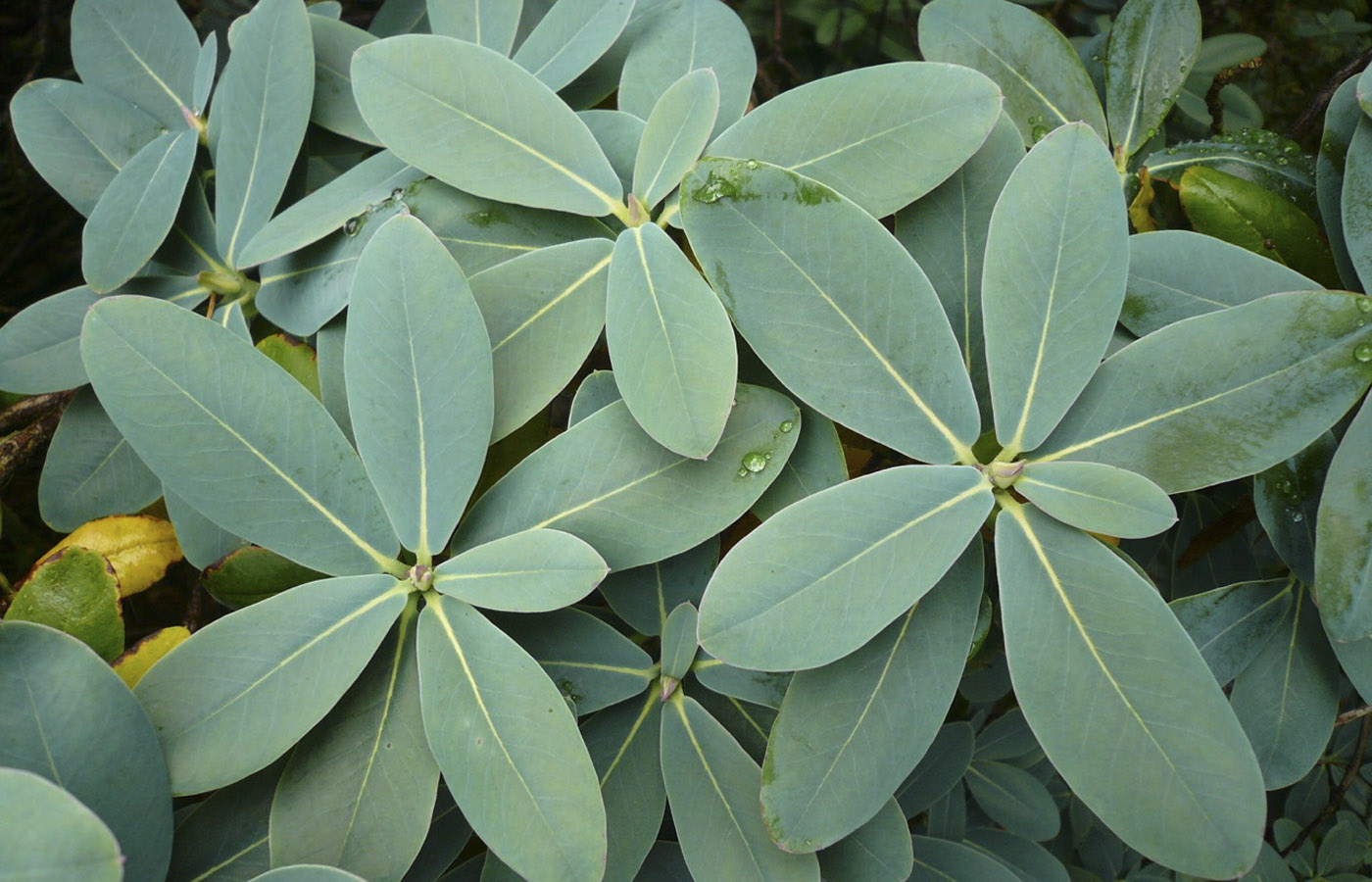 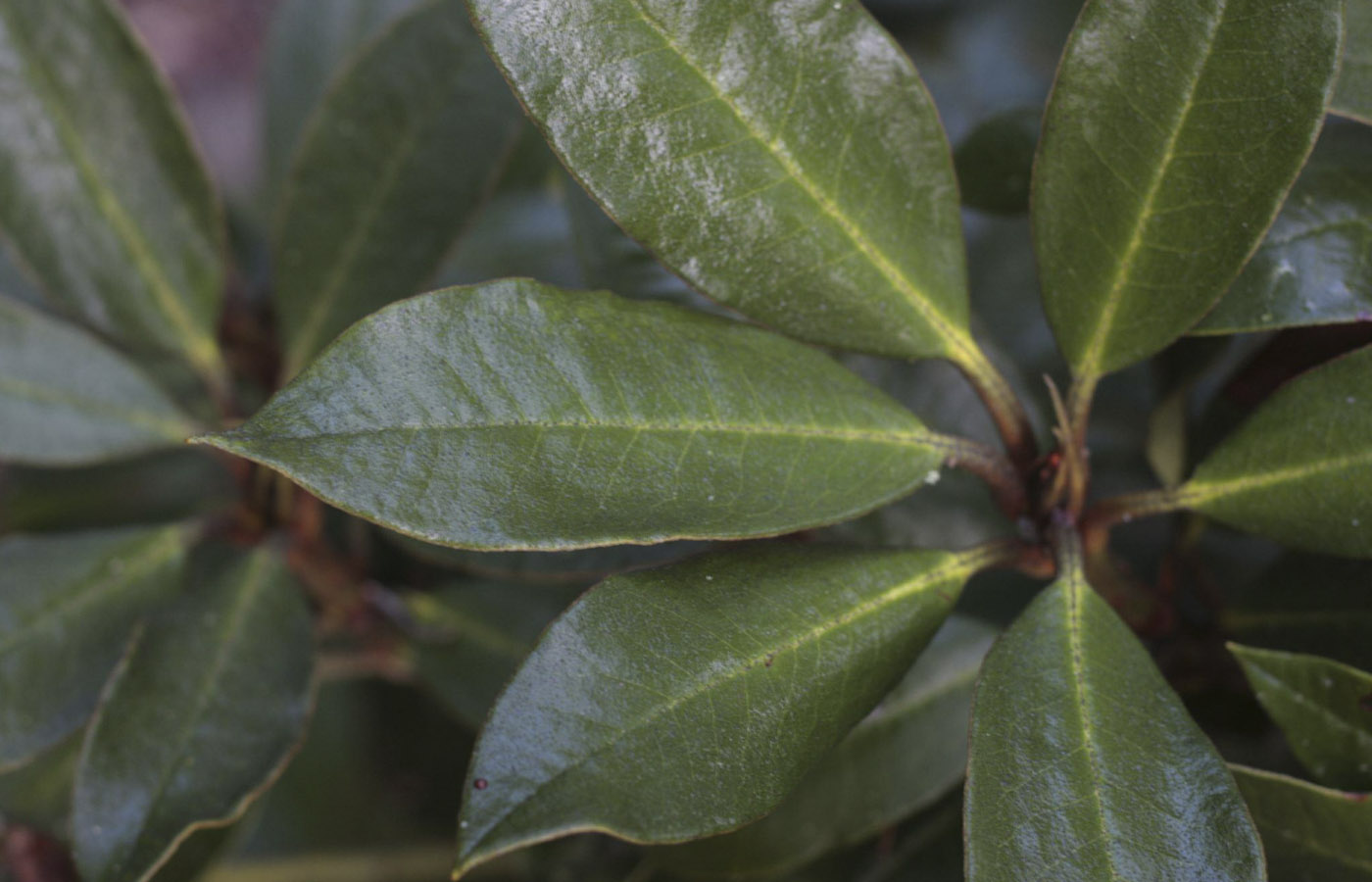 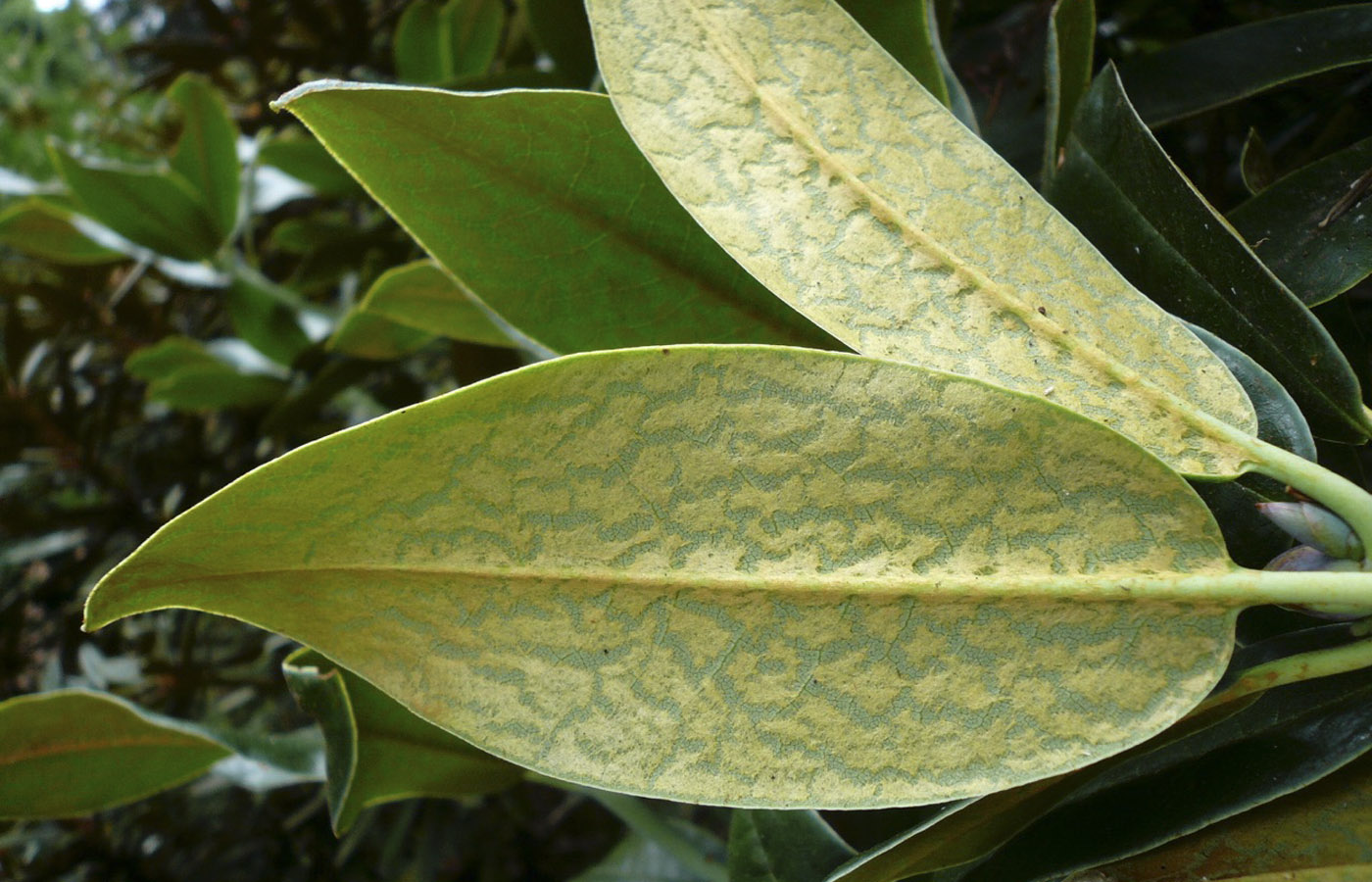 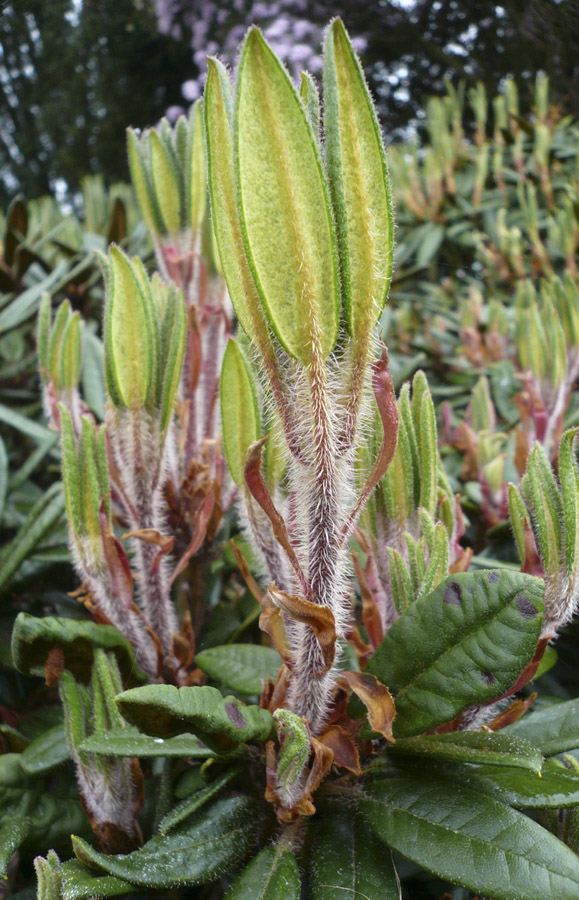 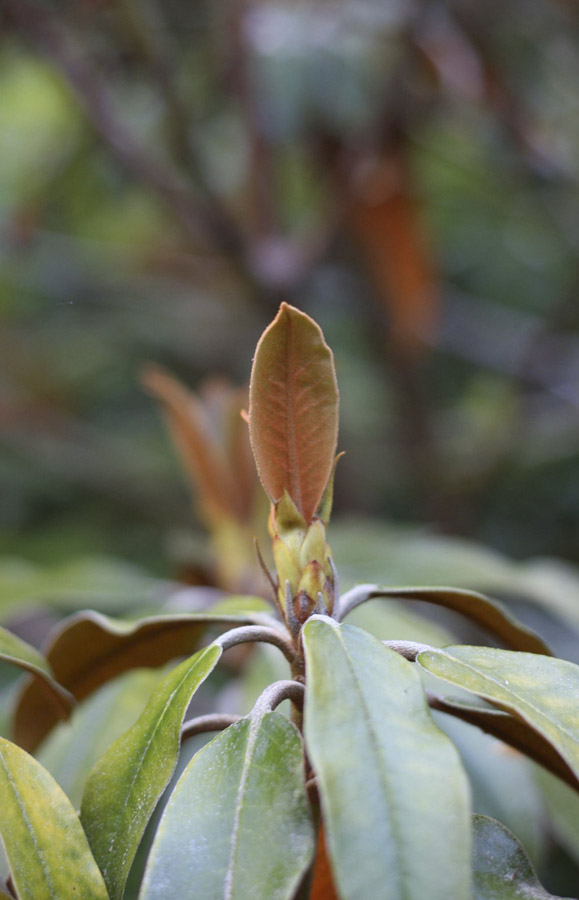