November 2019 in the Garden 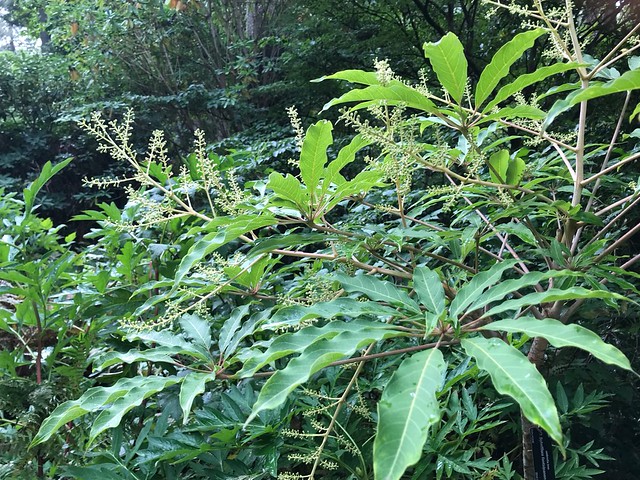 Not long ago, while walking in the David C. Lam Asian Garden, I thought to myself, where did all of these scheffleras come from? Considering that scheffleras are mostly known as tropical plants best known from shopping mall atriums and office building landscapes, it would seem an unlikely group to see at UBC Botanical Garden. Nevertheless, a few high-mountain Schefflera species from Southeast Asia, mostly not well-known or previously thought frost-tender, are showing themselves, at least initially, to be good garden plants here.

The genus Schefflera includes perhaps one thousand species, distributed throughout the tropics and subtropics in both hemispheres. They are easily recognized by their unarmed stems and evergreen, long-stalked, digitate (palmately-compound) leaves. Leaflets are usually elliptic or lance shaped, and they droop from small stalks that radiate around a central hub at the end of the main petiole (leaf stalk). The central leaflet is usually the largest, with leaflet size diminishing symmetrically to either side, but in several species, there are smaller “second-storey” leaflets that perch above and between the primary leaflets, maximizing the horizontal space available for photosynthesis, while reducing self-shading. The attractive radial phyllotaxy (arrangement of leaves in three-dimensional space) of both the leaflets and leaves is characteristic of the genus and defines the distinctive “schefflera look.”

A large number of Asian Schefflera species have been introduced into the UK and western North America over the last 20 years or so, thanks to a few modern-day plant collectors (notably Bleddyn Wynn-Jones, Steve Hootman and Dan Hinkley), and local gardens and nurseries are currently putting these species through their paces. Scheffleras are quite ballyhooed in the exotic plant community, but cold-hardiness and garden-worthiness testing is far from decided for most. At best, some species may be hardy to Zone 7b (average winter minimum of minus 15 C), but Zone 8b (minus 9 C) would be a safer guess for most of those listed below. We have eight species planted out in the Asian Garden. We’re not being crowded out by any stretch, but they are all flourishing beyond most expectations, and we plan to expand the collection considerably.

The following is a list of all of the scheffleras in the Garden (we have more in the Botanical Garden Nursery, not yet planted out). Consult the Garden Explorer digital tour for locations.

Schefflera alpina is a shrubby species (about 5 m, 15′ tall) from the mountains of northern Vietnam. While nearly all scheffleras have small flowers borne in upright panicles produced at the stem tips, S. alpina has flower stalks that droop below the leaves. The flowers are purple.

Schefflera delavayi is our largest schefflera specimen, both with respect to height and to leaf size. The huge leaflets are glossy above, but the undersides are covered in a fine, rusty-coloured indumentum. This southwestern Chinese species grows to about 8 m (25′) in the wild.

Schefflera fantsipanensis forms a tree-like crown and grows to about 5 m (15′) tall in the mountains of northern Vietnam. It is named for Mt. Fansipan (Phan Xi Pang) (elev. 3147 m), the highest peak on the Indochinese Peninsula.

Schefflera fengii is a tree-schefflera native to the mountains of southwestern China and adjacent Vietnam where it grows to more than 15 m (48′) tall and is reputed to be one of the cold hardiest of all scheffleras. Our plants are derived from a collection that was made by Steve Hootman, Director of the Rhododendron Species Botanical Garden. His original plant is now more than 6.5 m (20′) tall.

Schefflera hoi.This close relative of S. fantsipanensis has a slightly wider range that includes mountains of southeastern Tibet, Sichuan and Yunnan in China, as well as northern Vietnam. Schefflera hoi is taller (up to 10 m, 33′) and produces rusty hairs (versus yellowish hairs for S. fantsipanensis) on the panicle branches.

Schefflera minutistellata is a fast-growing, arborescent (tree-like) species from southern China that grows up to 8 m in height. The most noticeable feature of this species is its double-decker leaves. In Schefflera, each leaf comprises a long petiole and a set of radiating leaflets, but in some species a smaller set of leaflets sit above and between the larger ones. In S. minutistellata, the second-storey leaflets are prominent.

Schefflera rhododendrifolia. This species is probably the tallest growing of all cold-hardy scheffleras (presuming that it is cold-hardy—it has survived one winter so far). In the wild, this species grows to 20 m (66′) tall. It is noted for its rhododendron-like leaves.

Schefflera taiwaniana. Along with S. delavayi and S. fengii, this species, which is exclusive to the highest mountain in Taiwan (Alishan), is the most reliably cold-hardy of all scheffleras, and among the most distinctive. The leathery leaflets are freely borne on exceptionally long petioles and are long-lived as well. They typically persist for three years before yellowing and dropping off.