This year, like last, will go down as one of the better years for flowers and strong, healthy growth. Conditions are so similar to last year’s that I could just insert the May 2015 in the Garden article, change a few names, and no one would be the wiser. Let’s see…because spring arrived early on the West Coast this year (a month ahead of schedule in some cases), the normal discussion of May flowers is somewhat academic. Climbing roses, for example, are normally flowering near the end of May, but unless visitors came to the garden in April or plan to visit in the first week of May, they’ll be lucky to see these spectacular blooms at all. Likewise the normally May-blooming deciduous azaleas. So, what’s to see in May? Plenty, but high on the list this year are Styrax species. 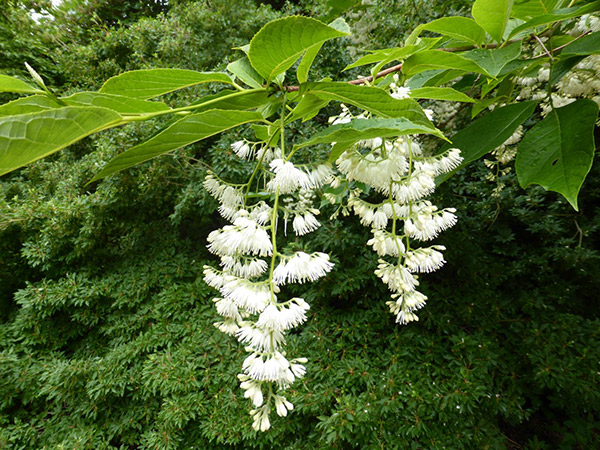 Speaking of Styrax, UBC Botanical Garden has one of the most extensive collections of Styrax species and relatives in North America. The Styracaceae (the snowbell family) includes a number of attractive, garden-worthy plants. Nearly all bear hanging, lemony-fragrant, bell-shaped flowers in opulent clusters that festoon the undersides of the horizontal branches. And most produce woody, nut-like fruits (not edible) that hang ornamentally from those branches. A number, including the North American Halesia (silverbells), and East Asian Rehderodendron (sausage tree) and Melliodendron (parasol styrax), bear conspicuously ribbed fruits. 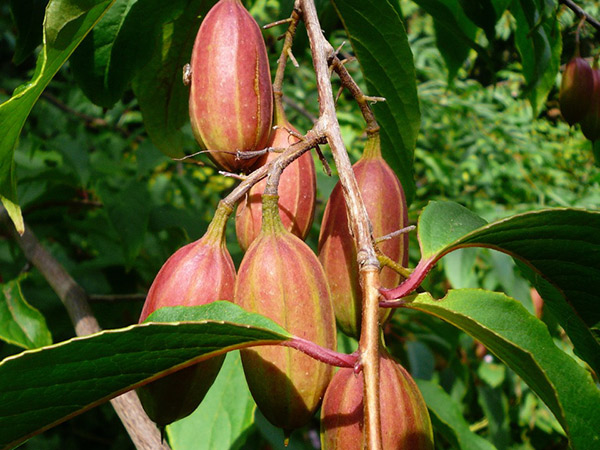 The large, hanging fruits of Rehderodendron are particularly ornamental in May and June, as they gradually redden and fatten up, often to the size of kiwifruits. Both Rehderodendron and Melliodendron are common throughout the David C. Lam Asian Garden. The May-blooming Pterostyrax (epaulette tree) is another snowbell relative, but one that is somewhat anomalous in having tiny flowers, though their prodigious numbers easily make up for their small size. The flowers of the Japanese P. hispida are fringed and crowded side-by-side in drooping, 15- to 30-cm-long clusters that are reminiscent of the ornamentations on military epaulettes. The flowers are followed by equally attractive, tiny, silver-grey, bristly, spindle-shaped fruits later in the summer. Look for this species on Upper Asian Way at Henry Trail.

Although better known than many of its relatives, the genus Styrax itself is not without its treasures. Each of the twenty or so species cultivated in the Botanical Garden is charming at the very least, and many are sublimely beautiful when flowering. Styrax obassia (fragrant styrax) is arguably one of the best. The common name of this small East Asian tree could be somewhat misleading, since all Styrax species produce fragrant flowers. A better name for S. obassia might be big-leaf snowbell, as it has the largest leaves by far of any of the cultivated species. Like most other Styrax species, flowering occurs in late spring, well after leaf emergence. In this stunningly beautiful species, there are up to twenty fragrant, bell-shaped white flowers produced on 20-cm-long, horizontally drooping stalks. Set amongst the large rounded leaves, and often hidden from view, the flowers are best seen from below. Our best and largest plant is situated in a sea of Yakushima rhododendrons (R. degronianum subsp. yakushimanum), below Lower Asian Way near Tschonoski Trail.

More pictures of May in the Garden can be found on our Forums.