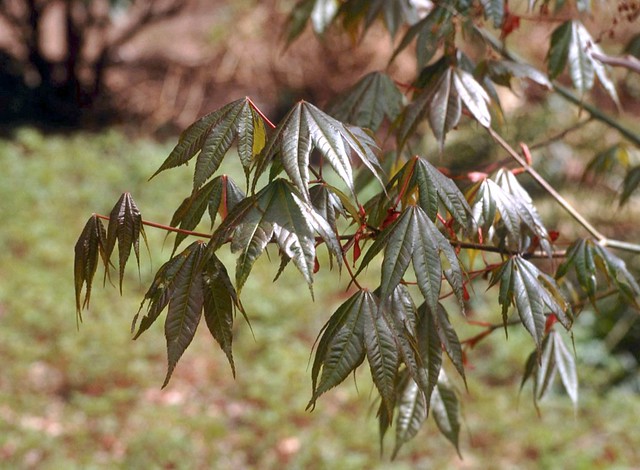 May is an excellent time to view the Botanical Garden’s maple collection. This is not to say that other plants are not worth our attention— flowering rhododendrons, roses, early perennials and many other plants are certainly still conspicuous in May—but the fresh green leaves and developing fruits of maples (known as samaras) are often exceptionally beautiful at this time. And the subtlety of these features is often a restful contrast to the more exuberant spectacle all around them.

While we have a huge diversity of maples in the Garden, the fork-branched group of maples is especially prominent. This group includes several familiar species, including our native vine maple (Acer circinatum), the common Japanese maple (A. palmatum) and the downy Japanese maple (A. japonicum). These species are widely grown because of their small size and garden adaptability, and particularly, their handsome palmately lobed leaves. A feature of this group is paired terminal overwintering buds, which result in the characteristic forked branching. Unlike most other public gardens, our collection of popular cultivars of these species is rather limited. Instead, we have amassed an impressive number of individual species in this group. In total, we have sixteen species, representing some ninety separate accessions (an accession usually representing a separate seed collection in the wild). Of course, we have nothing against the cultivated selections of A. palmatum—they are excellent garden plants and often exceptionally beautiful—but our mission compels us to assemble, cultivate and interpret a wider diversity of plants that includes maples of known, wild provenance (e.g., from documented wild-collected seed). And because we have an environment and climate suited to the culture of Asian maples, we will continue to grow and celebrate that fascinating group.

Acer campbellii (Campbell’s maple) is one such species in the fork-branched group. It represents a huge complex of species that extends from southwestern China and adjacent Indochina to the Himalayas. A “species complex” generally describes a number of closely related, interbreeding populations of plants that represent a variety of expressions (e.g., big leaves, small leaves, red flowers, yellow flowers, etc.). Typically, conservative botanists tend to lump all of the various manifestations under one species name, while more “liberal” botanists might give each one a different species name, or consider using a subspecies designation to recognize variation that has a geographical basis. Botanists are either “lumpers” or “splitters.” We have a number of accessions of this species in the David C. Lam Asian Garden, and they all differ to some degree.

One of our most beautiful Acer campbellii is from a seed collection that was made in Bhutan by the renowned English plant explorer Keith Rushforth in 1990. This plant displays blue-green, eventually light brown bark, and glossy, bright green, pleated, five- to seven-lobed leaves with cerise-pink petioles (leaf stalks). The new shoots and samaras are often similarly cherry coloured. We have two accessions of this collection, one on Lower Asian Way between Rock Creek and Forrest Trail, the other on Lower Asian Way between Kingdon Ward Way and Farrer Trail. This latter specimen was planted to commemorate the twenty-fifth anniversary of the Friends of the Garden (FOGs). I saw similar looking plants on riverbanks in leech-infested middle-elevation forests in Tibet in 2017.

Another Campbell’s maple, at the corner of Upper Asian Way and Kingdon Ward Way, is a collection that was made by a group of English and American collectors in Sichuan in 1994. These trees have tan bark and exceptionally broad, mostly five-lobed leaves. The samaras are often red, but they have significantly broader wings than any of our other accessions (there is a second, shaded and slightly less impressive specimen of this accession on the upper part of Hemsley Trail). Like so many other plants, the Chinese versions of species are often much more cold-hardy than selections of the same species from Indochina or the Himalayas, and this accession certainly fits that bill. The specimen on Upper Asian Way is already one of the most attractive maples in the Botanical Garden and it appear that it will only get better as it grows.

Regarding Indochinese stock, we have but a single surviving seedling of a plant in the Acer campbellii complex from the mountains of northern Vietnam. It is located along Decaisne Trail, below Lower Asian Way. This plant came to us from a collection made by the Welsh plant explorer and nurseryman Bleddyn Wyn-Jones in 2013. Looking at it, some might consider it a completely different species, as it produces striking, purple-backed, mocha-coloured leaves, and dark coloured bark. In fact, for many years, collectors thought it was a different species—A. heptaphlebium—but that name applies to a completely different species, only found in a different part of Vietnam. In any case, we now know that as these dark-leaved plants mature, their kinship with A. campbellii becomes clearer. At this point, we are calling the plant “A. campbellii affinity.” Whether it survives for long enough to reach reproductive maturity is an open question, but as it establishes in the Asian Garden, it gets a little stronger each year.

We’re hopeful that we can cultivate the considerable range of variations in A. campbellii from collections across its range. Now that we can expand our plantings into our newly opened and irrigated areas south of the Tree Walk, we have plenty of room to do so.  Cultivating species like A. campbellii from the widest variety of habitats in a common garden (i.e., where the conditions are essentially uniform) allows us to not only represent the genetic diversity of these plants, but to better understand what factors the environment plays in the variation we see in them. Ultimately, we want to contribute to a better understanding of the plants we grow.