May brings a huge variety of plants into flower in the Botanical Garden. In the David C. Lam Asian Garden, primulas, rodgersias, shrubby peonies, Meconopsis (blue poppies), Clematis species and lingering, late rhododendrons are some of the stars. Chinese evergreen magnolias are also in bloom at this time. One of the tallest magnolias in the garden, M. ernestii, produces its yellowish banana-scented flowers high in its crown in May. Although the flowers are mostly unseen, the fragrance wafts lazily through the area between the Moon Gate and Wilson Glade.

The Garry Oak Meadow and Woodland Garden is usually at its peak in May, the ephemeral riot of colour (get it while it’s hot!) primarily attributed to a mash-up of Plectritis (sea blush), Camassia (camas), Fragaria chiloensis (beach strawberry) and Lomatium (spring gold). Not to be outdone, the E.H. Lohbrunner Alpine Garden features even more saturated colours in the masses of Ceanothus (California lilac), Cistus (rock rose) and geraniums that punctuate the bouldery slopes. The recently renovated Contemporary Garden has much in store for lovers of floral display. Starting in May, watch for the pastel shades of Pacific Coast irises (primarily selections of Iris douglasiana and I. innominata) and the sumptuous Iris spuria (blue iris), as well as a number of early classic shrubs roses, all of which are noted for fragrance. 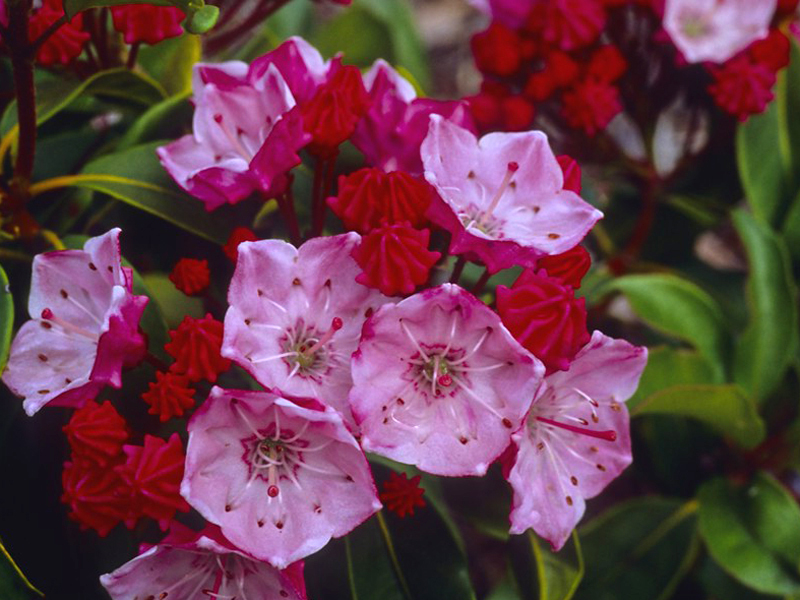 The Carolinian Forest Garden, which is usually celebrated more for its tree collection rather than for flowers, is worth venturing into in May (or at any time, really). Here, we feature rhododendrons from the Appalachian region of Eastern North America. These are “late flowering,” compared with most of our Asian species, and this means flowers in May and June. You can find R. catawbiense (Catawba rhododendron), R. maximum (rosebay rhododendron) R. minus (piedmont rhododendron), and the spectacular, deciduous R. calendulaceum (flame azalea) in flower among the trees of this developing arboretum. Somewhat later in bloom, and with flowers more staid in colour (white to light pink) is the smooth azalea R. arborescens. What this azalea lacks in colour it more than makes up for in the strong, clove-like fragrance of its flowers. Kalmia latifolia (mountain laurel), an endemic eastern North American rhododendron relative also produces its extraordinary blooms at this time.  Last, but by no means least, are the multitude of blooms in the BC Rainforest Garden, including those of the Pacific rhododendron, R. macrophyllum (pink and white flowered forms), Kalmia polifolia (bog kalmia), various Maianthemum species (false Solomon’s seal, false lily of the valley), Menyanthes (bog bean) and Cornus unalaschkensis (dwarf cornel), among other native treasures.

As these flowers come into bloom, you can find photos of some of them on our forums.