Following on from a year of weather-related surprises, I am continuing with the theme of cautious weather forecasting. I will refrain from predicting the normal March flowering regime, which would include (at a minimum) magnolias, primulas, rhododendrons and a wide variety of bulbs. Instead, I am falling back on another group of broadleaved evergreens. Better safe than sorry—and anyway, I seldom have occasion to highlight plants that don’t have showy flowers.

The bamboos are a group of mostly attractive broad-leaved evergreens with comparatively narrow leaves. Bamboos are woody-stemmed grasses that grow from horizontal underground stems called rhizomes. The primary above-ground stems are known as culms. Both above- and below-ground structures are significant from a gardening point of view. The culm—its colour, size, abundance and texture—is generally the bamboo’s most noteworthy feature. But the nature of its rhizomes determines whether a bamboo spreads or stays put, and this is an obviously important factor in determining where and how to grow these plants.

Flowering in bamboos is another interesting feature, but one that is poorly understood. At least among cultivated bamboos, flowering is more or less synchronous within a species (all individuals of the same species flowering at the same time, more or less), and there is always a long, often decades-long, interval of vegetative growth before flowering. This phenomenon is known as mass flowering and is generally followed by the production of seeds and the slow death of the plant.

The Botanical Garden’s bamboos are, by virtue of their age, becoming increasingly visible as a collection, particularly in the David C. Lam Asian Garden, where nearly all of the species are housed. There are approximately fifty different kinds of bamboos here, equally split between clumping and running types. The largest bamboos in the garden are running bamboos and include a number of Phyllostachys (groove-stem bamboo) species. Phyllostachys edulis (moso bamboo) has dull, grey-blue culms and a surprisingly aggressive nature. There is a plant on Upper Asian Way, immediately west of the Moon Gate. In an attempt to deal with its wandering proclivities, the area around our plant has been blocked on all sides by a sand-filled trench, which allows for the “easy” severing of its rhizomes when they push into the trench. The trench was undertaken in 2018 after we discovered new culms emerging some 6.5 m (20 feet) away from the main clump of culms! In warmer climates, established plants can produce 20-cm (8-inch) -diameter culms up to 20 m (62 feet) tall.

One of the fastest growing and showiest of the timber bamboos is found on Upper Asian Way west of the Moon Gate. Phyllostachys vivax f. aureocaulis (golden timber bamboo) is a natural golden variant of the common Chinese timber bamboo, P. vivax (Flannagan Trail east of Farrer Trail). The species is well known for its thin-walled culms, which are harvested across Asia for their edible emerging shoots. When allowed to grow to full size, the culms rocket skyward, but as the leaves emerge and the long, side branches develop, the culms droop with the weight, even sometimes bending to the ground. Like the green-stemmed wild-type, P. vivax f. aureocaulis can produce 10-cm (4-inch) diameter culms and grow to more than 20 m tall, but we expect ours to attain only about half that size. Planted in 2012, our specimen struggles to produce self-supporting culms. There are a number of reasons that might be holding this bamboo back. Before being able to produce a good crop of culms most bamboos first have to develop a good network of sturdy, starch-rich rhizomes. Our well-drained soils are not particularly deep or rich, and in the shade, their productivity is low. And in its first few years, f. aureocaulis was plagued by slugs, unable to produce more than a few leafy culms (more leaves mean more photosynthesis and the products necessary to fuel good rhizome growth). Still, this plant always produces slightly larger culms than those of the year before, so watch this space.

Another runner, but dramatically different from the groove-stem bamboos is Chimonobambusa tumidissinoda (walking stick bamboo), which is located in the middle of the Wharton Glade. This aggressive running bamboo has both tightly-clustered bright green culms and wandering rhizomes, but the appeal of this bamboo is in the delicate leaves and especially the unlikely-looking nodes along the culms. The nodes comprise a compressed double disc nearly twice the diameter of the internode, which is the derivation of the name tumidissinoda (tumidus = swollen + issima = very + nodus = node).

At the other end of the spectrum are the clumping bamboos. A number—primarily Fargesia species—are famous for being the favoured food of giant pandas. Fargesia scabrida (orange stem bamboo) is currently the largest clumping bamboo in the Botanical Garden. It produces stiffly upright blue-green culms with persistent papery, orange-brown sheaths (sheaths are modified leaves that protect the vulnerable, expanding stems). We have a large specimen at the corner of Kingdon Ward Way and Lower Asian Way, and smaller clumps between the Campbell Building and the pond (visible from the boardwalk).

A closely related species, Fargesia robusta (giant fargesia) is planted on the west side of the Garden Pavilion, amongst a planting of  Nandina domestica (heavenly bamboo). Nandina is not a bamboo at all, but a member of the barberry family. The giant fargesia is only a few years old, but we expect it will form a clump much like that of F. scabrida, with slender, stiffly ascending culms to about 6.5 m (20 feet) tall. Both species have small, tough, bright green leaves, but the culms of F. robusta are bright green, turning to butter yellow in the sun, and the straw-coloured to creamy-white sheaths are more quickly shed.

Somewhat smaller than the previous two species are a handful of similar-looking fargesias in the Asian Garden. At this stage of growth (they were all planted about 10 years ago), they are difficult to distinguish. All produce a lush complement of glaucous-backed, papery leaves on attractively arching culms. F. dracocephala ‘Rufa’ (dragon’s head bamboo) is located on Hemsley Trail, overhanging the path leading to the tree-top walk entrance. When its culms are expanding in mid-summer, the tip of the culm sheath displays ornate hairs that have been likened to a dragon’s head (dracocephala means “dragon’s head”). In contrast, F. denudata (fox tail bamboo), which is located on the hillside above Upper Asian Way west of Tschonoski Trail, produces no hairs of any kind (denudata means “naked”). There are actually two selections of this species there, the upright and less robust ‘Xian 1’, and the more opulent, spreading, ‘Xian 2’. Fargesia murielae (umbrella bamboo), which is located on Beer Trail in the Campbell Glade, is named for Muriel Wilson, daughter of the famous plant explorer, Ernest Wilson. Umbrella bamboo is much like fox tail bamboo in the absence of hairs atop the culm sheaths; however, close examination of the tips of the leaf sheaths (this is getting ridiculous, I know) shows that there are a few tiny hairs, and it is these that may be used to differentiate the two species. All three species should presumably be more easily determined when they are older and closer to a mature size.

Finally, look for the South American, Chusquea montana (Andean bamboo) in the east bed in the Front Entrance Plaza. Andean bamboo is an understorey species native in cool, damp, Nothofagus (southern beech) forests in Chile and adjacent Argentina. While there are plenty of chusqueas that have aggressive, wide-spreading rhizomes, this species is definitely a clumper. The species is normally recognized by the dense, ruff-like complement of bushy branches that surround its swollen nodes, but the pea-green culms also contrast nicely with parchment-white culm sheaths in summer. Unlike the Asian bamboos, the chusqueas have solid culms. 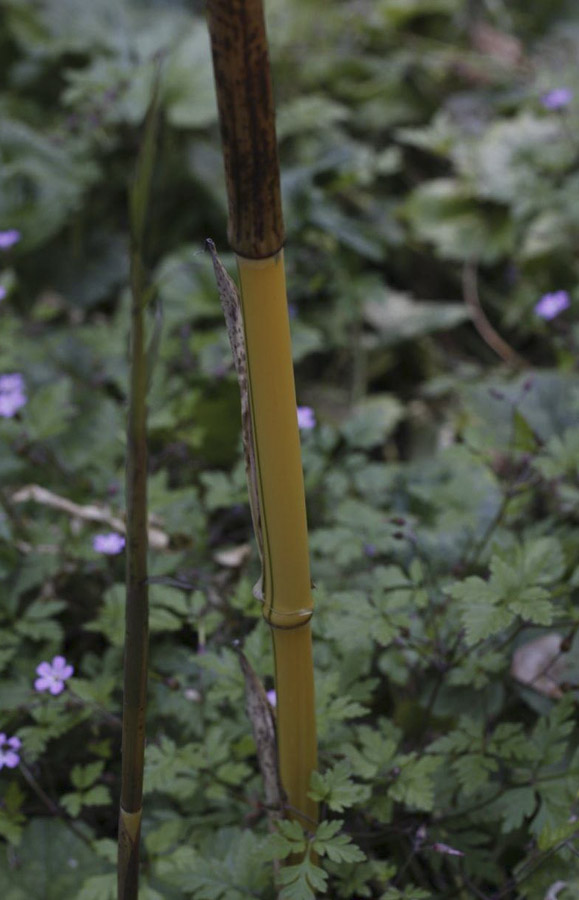 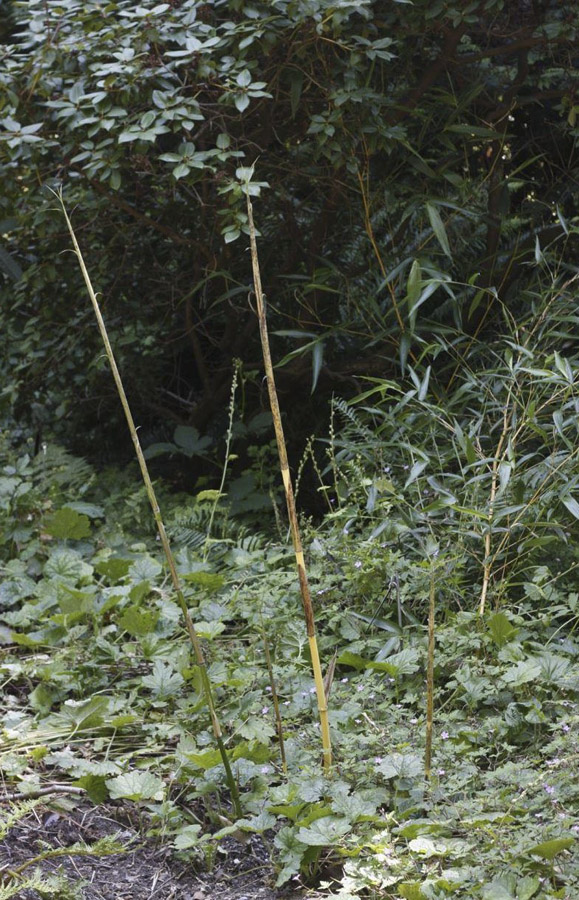 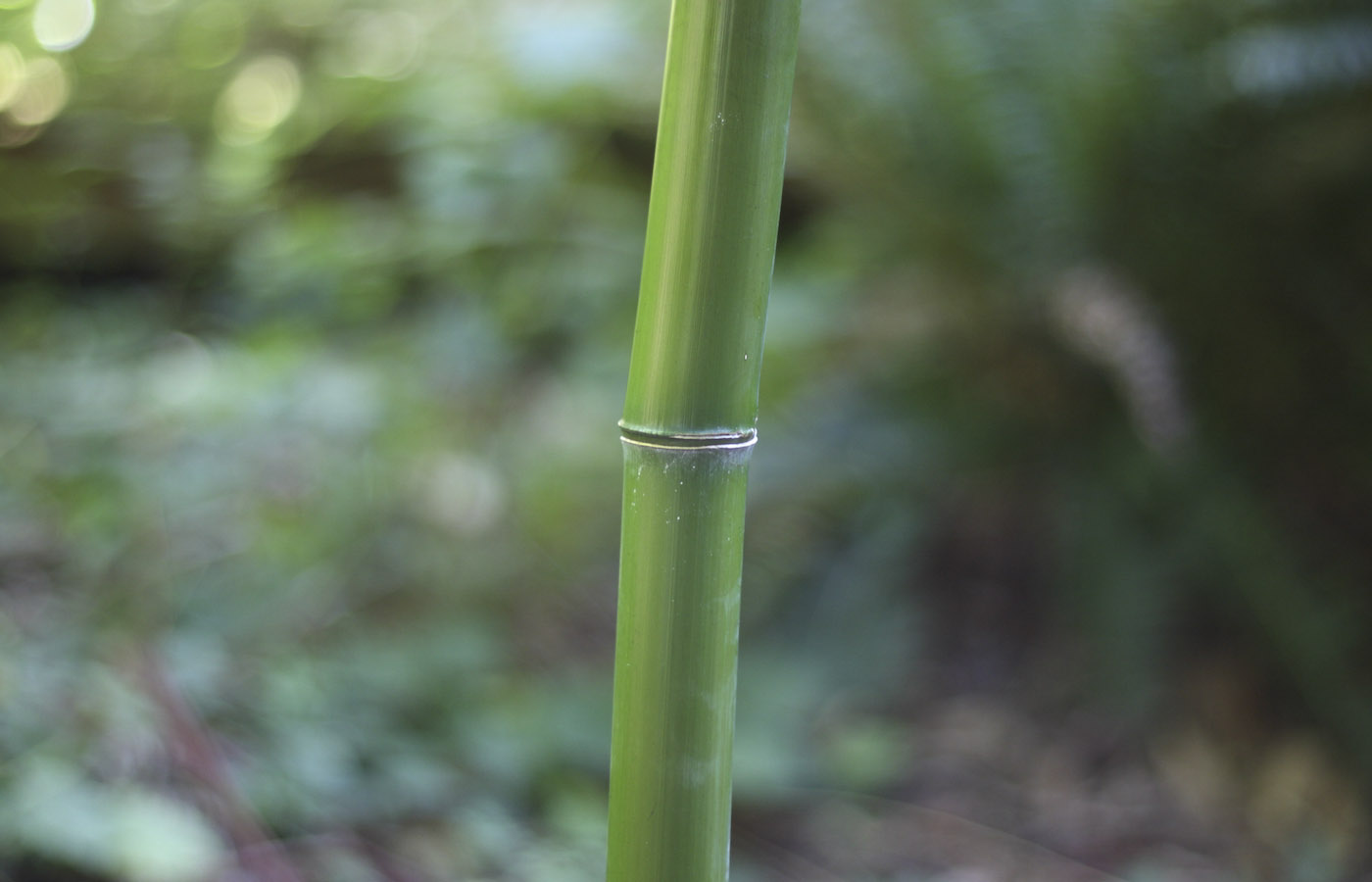 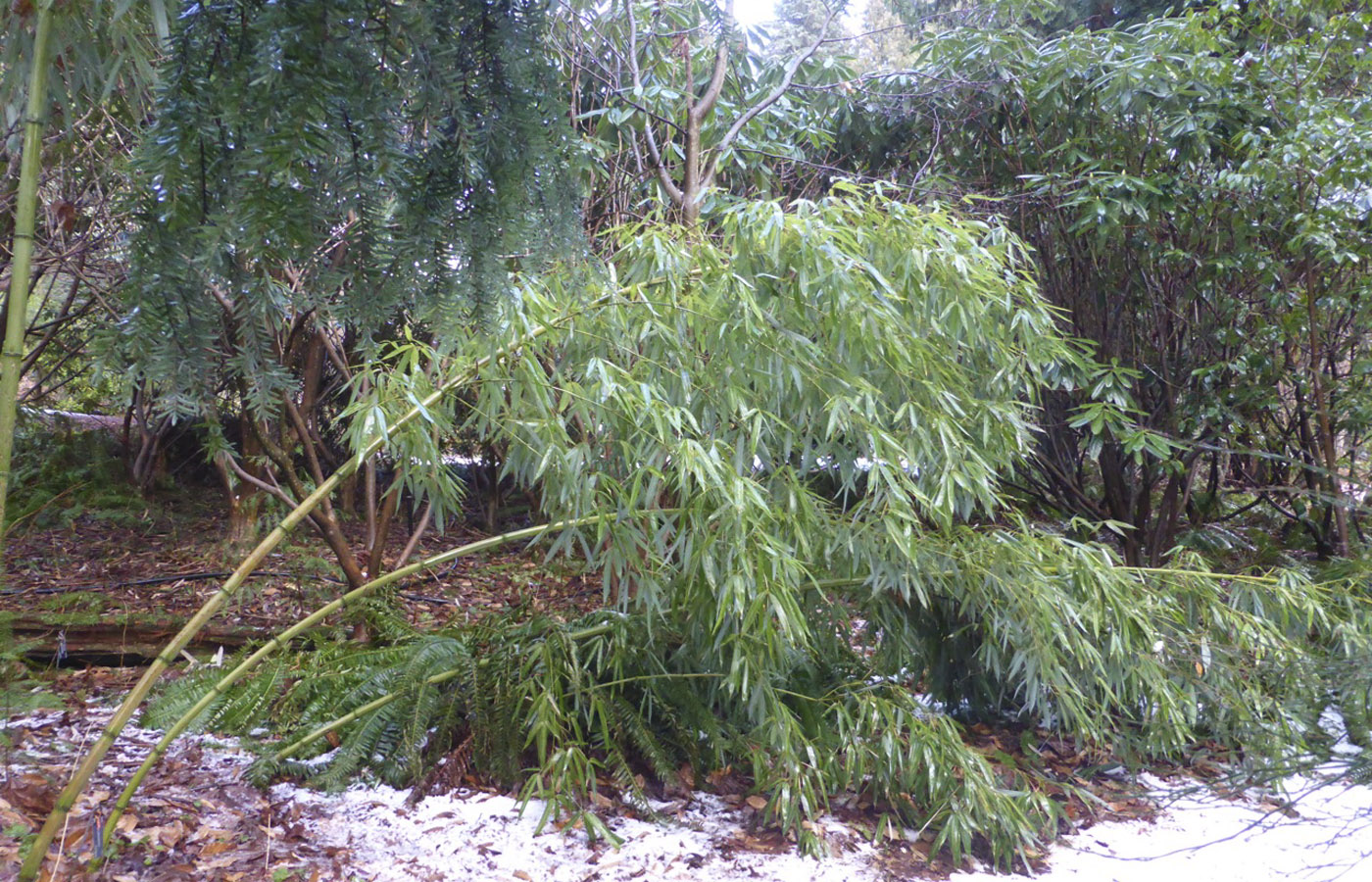 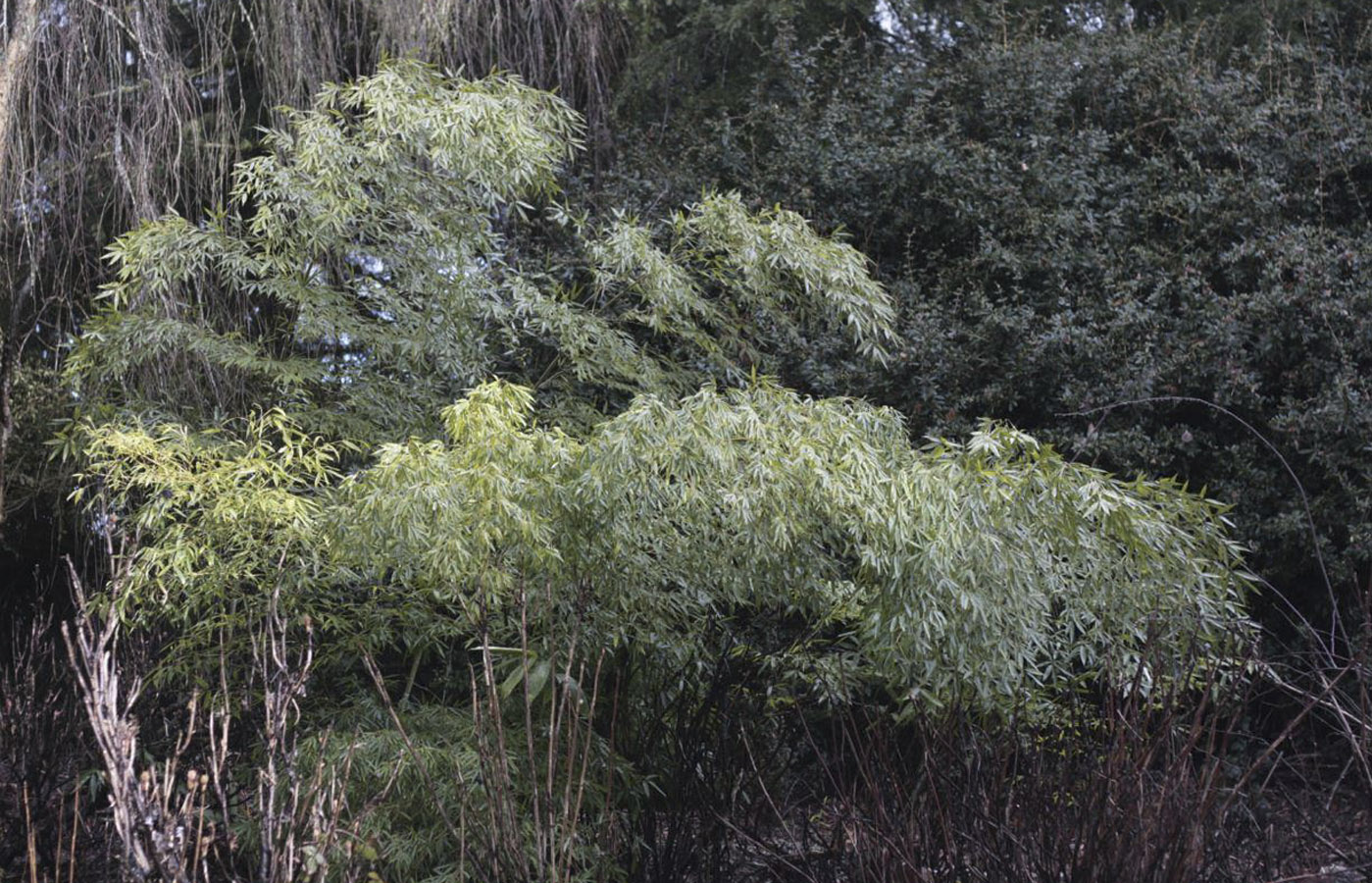 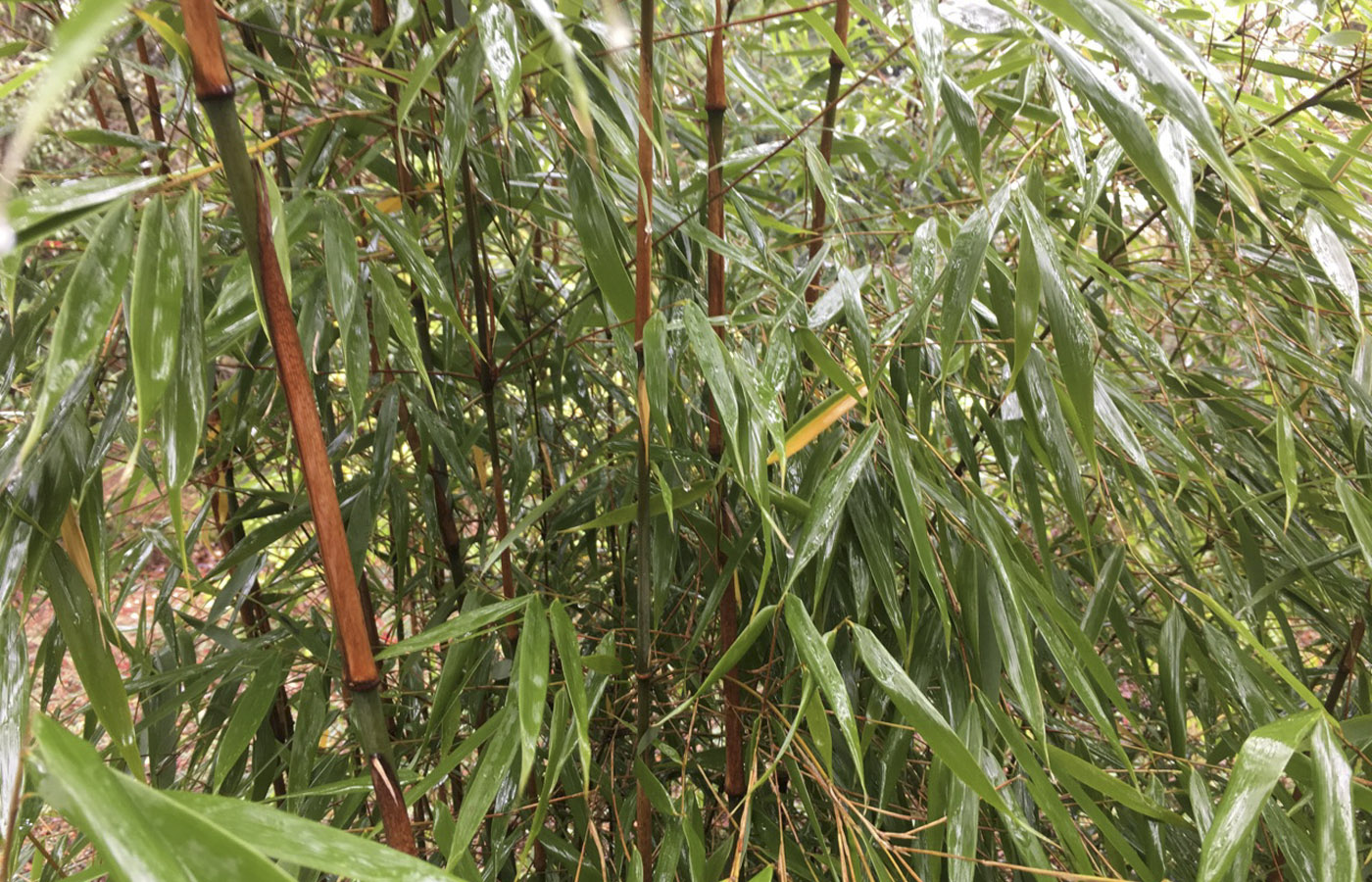 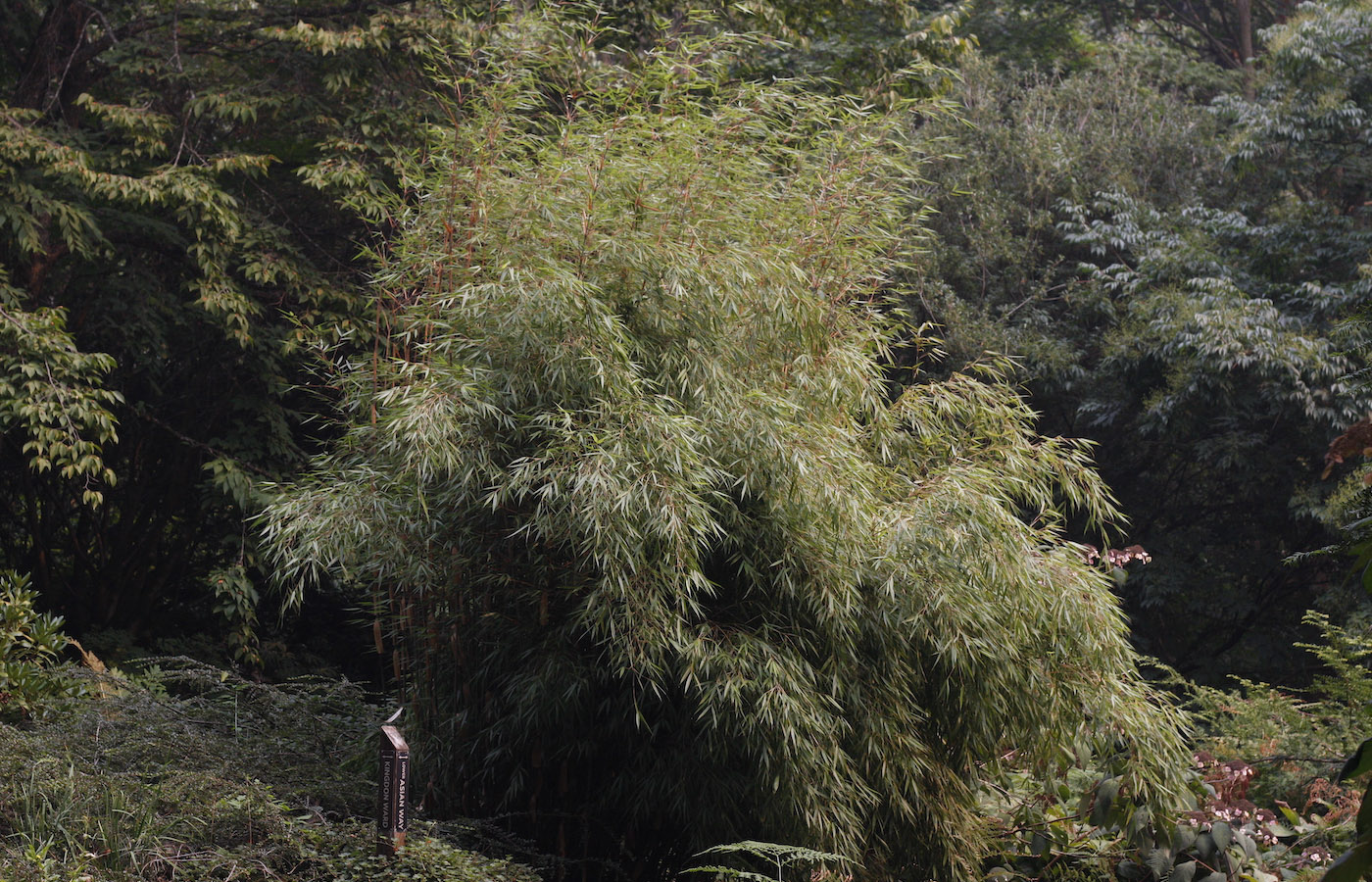 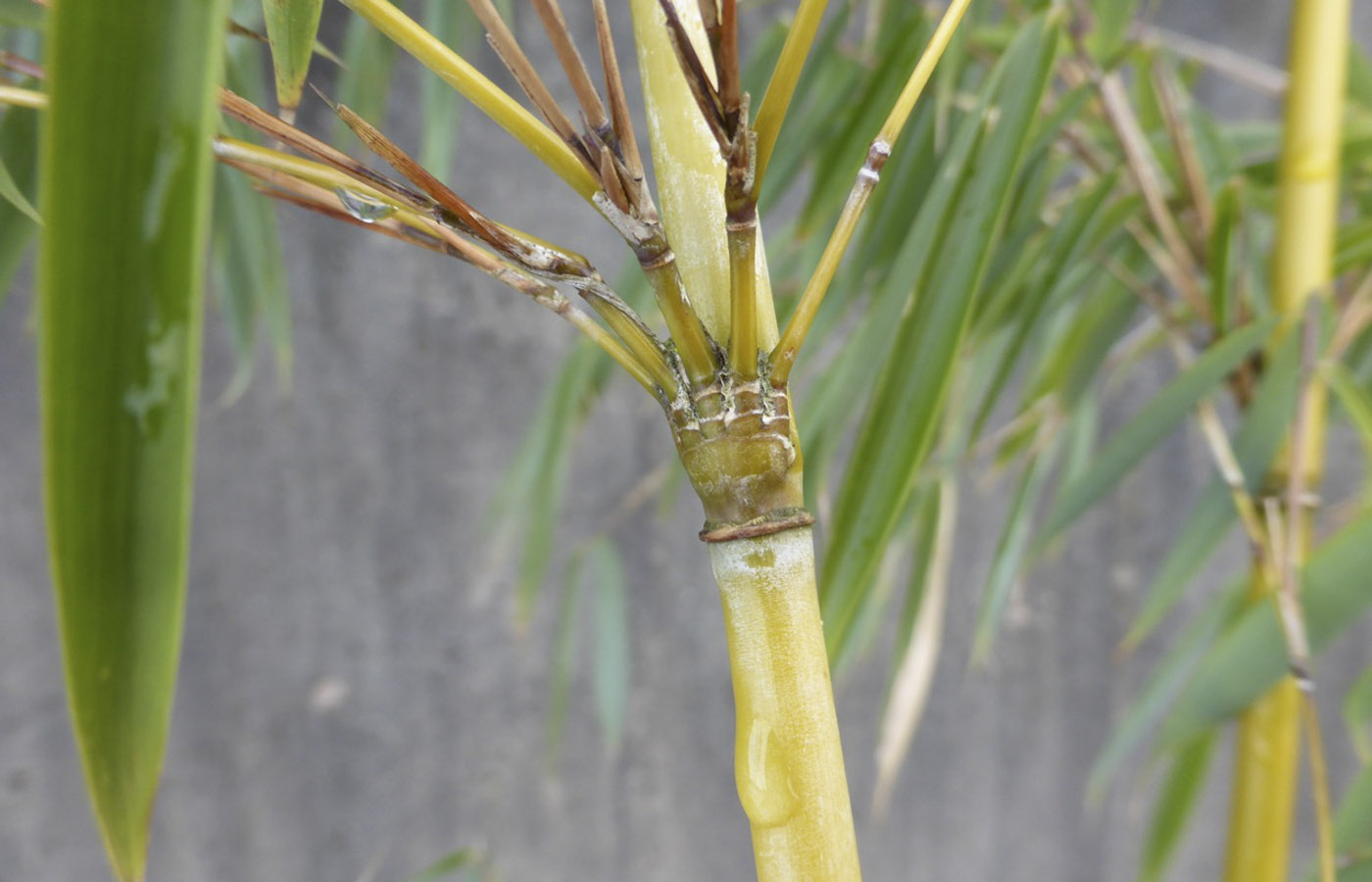 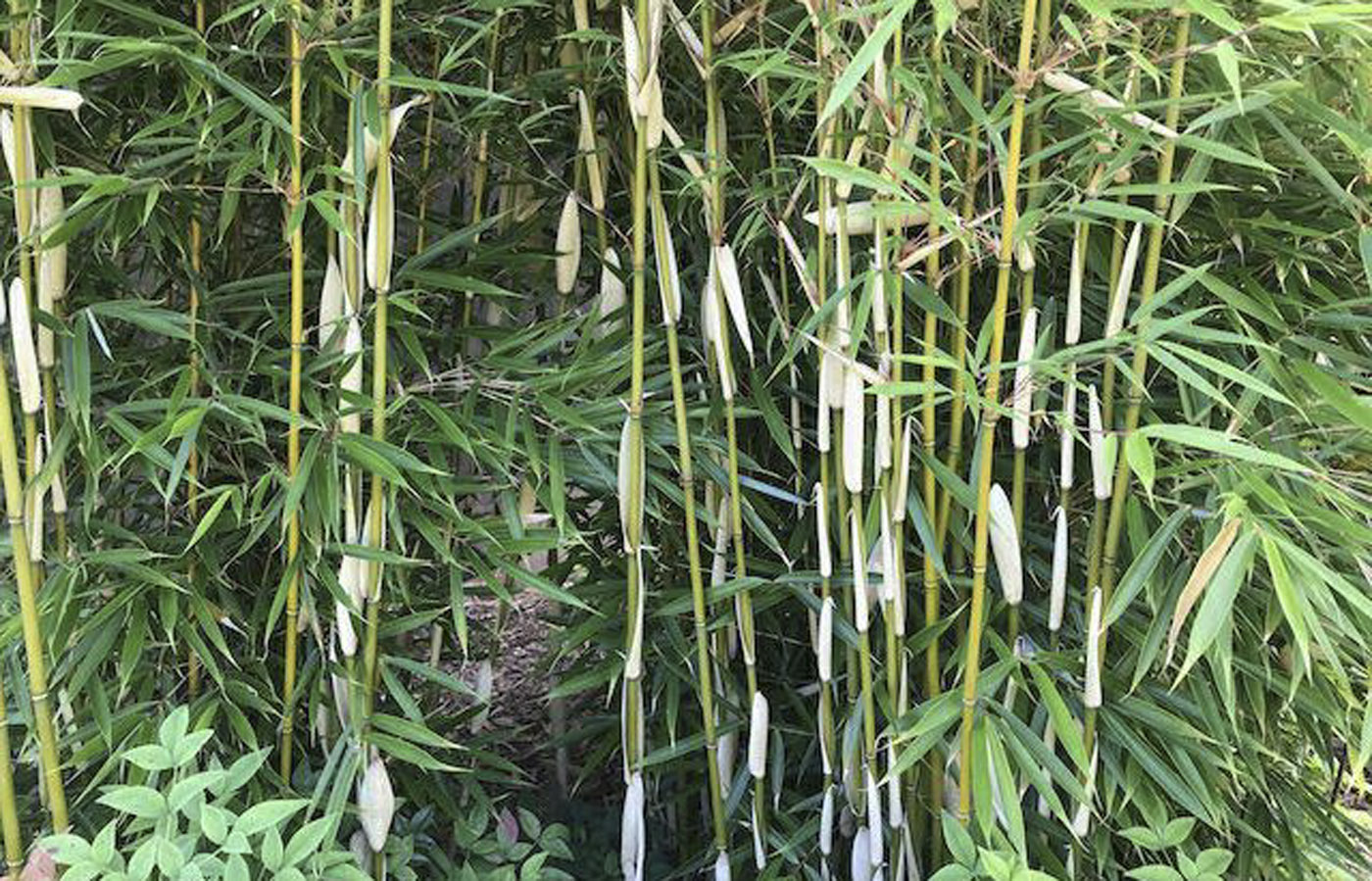 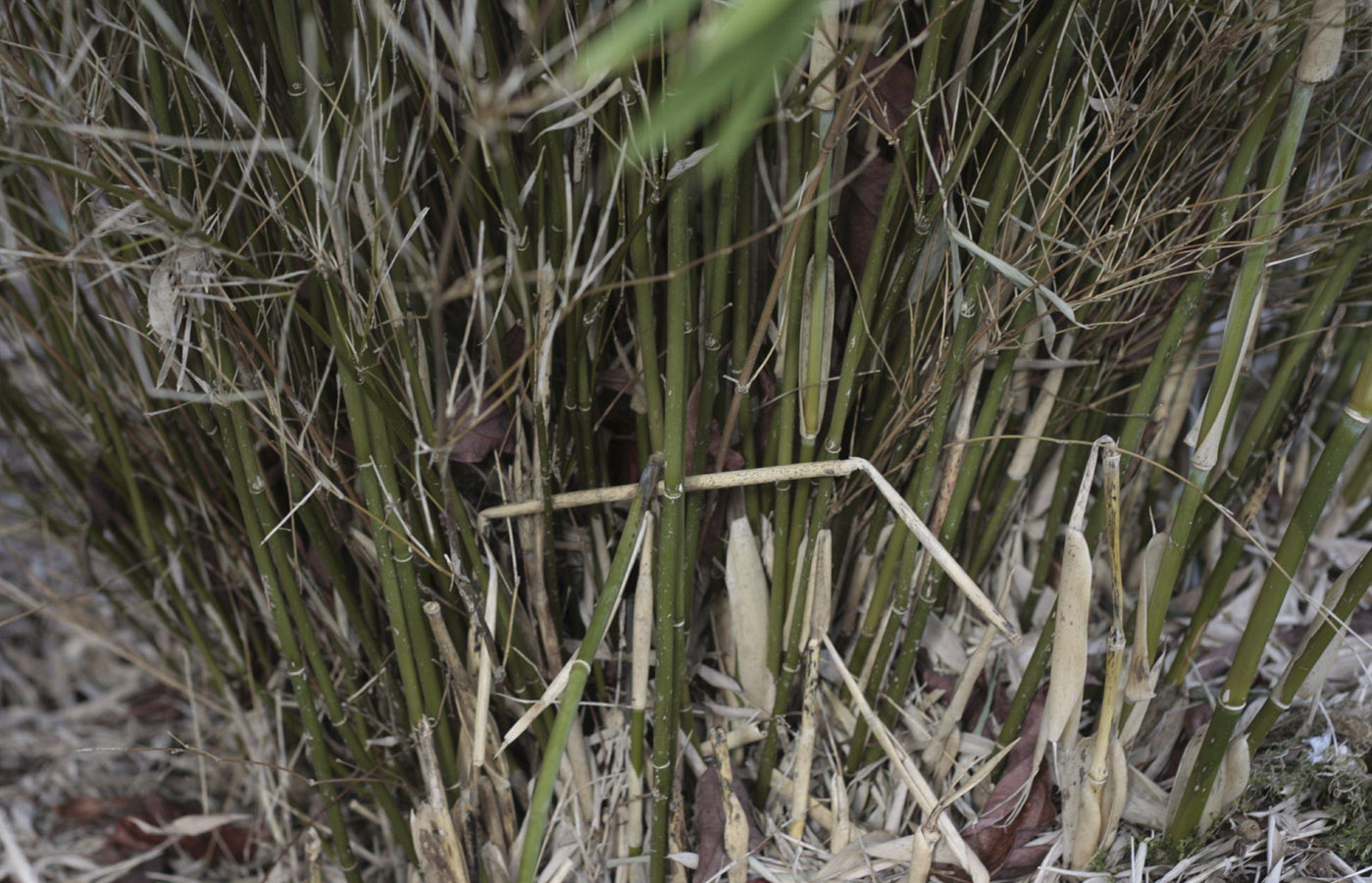 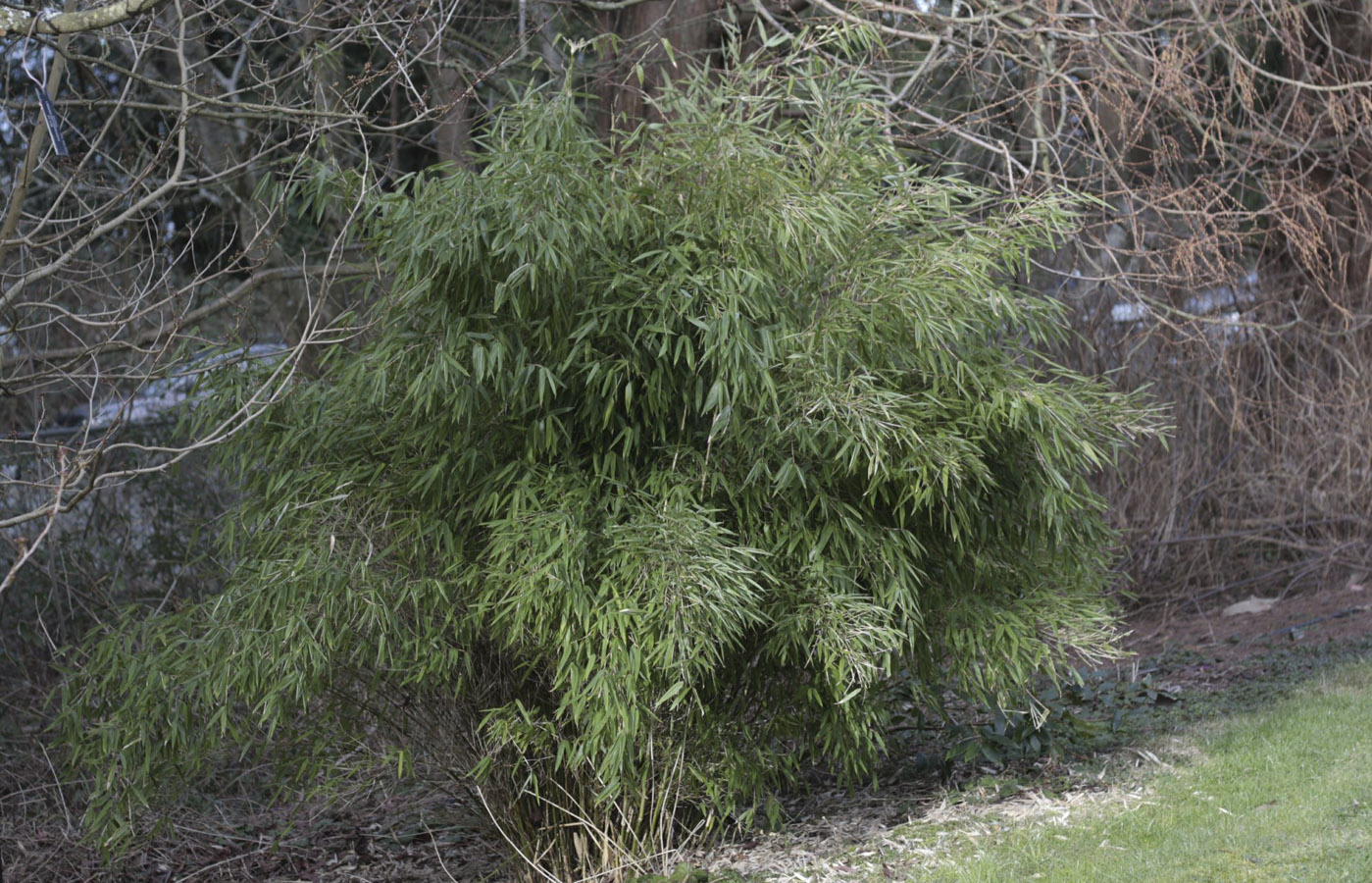 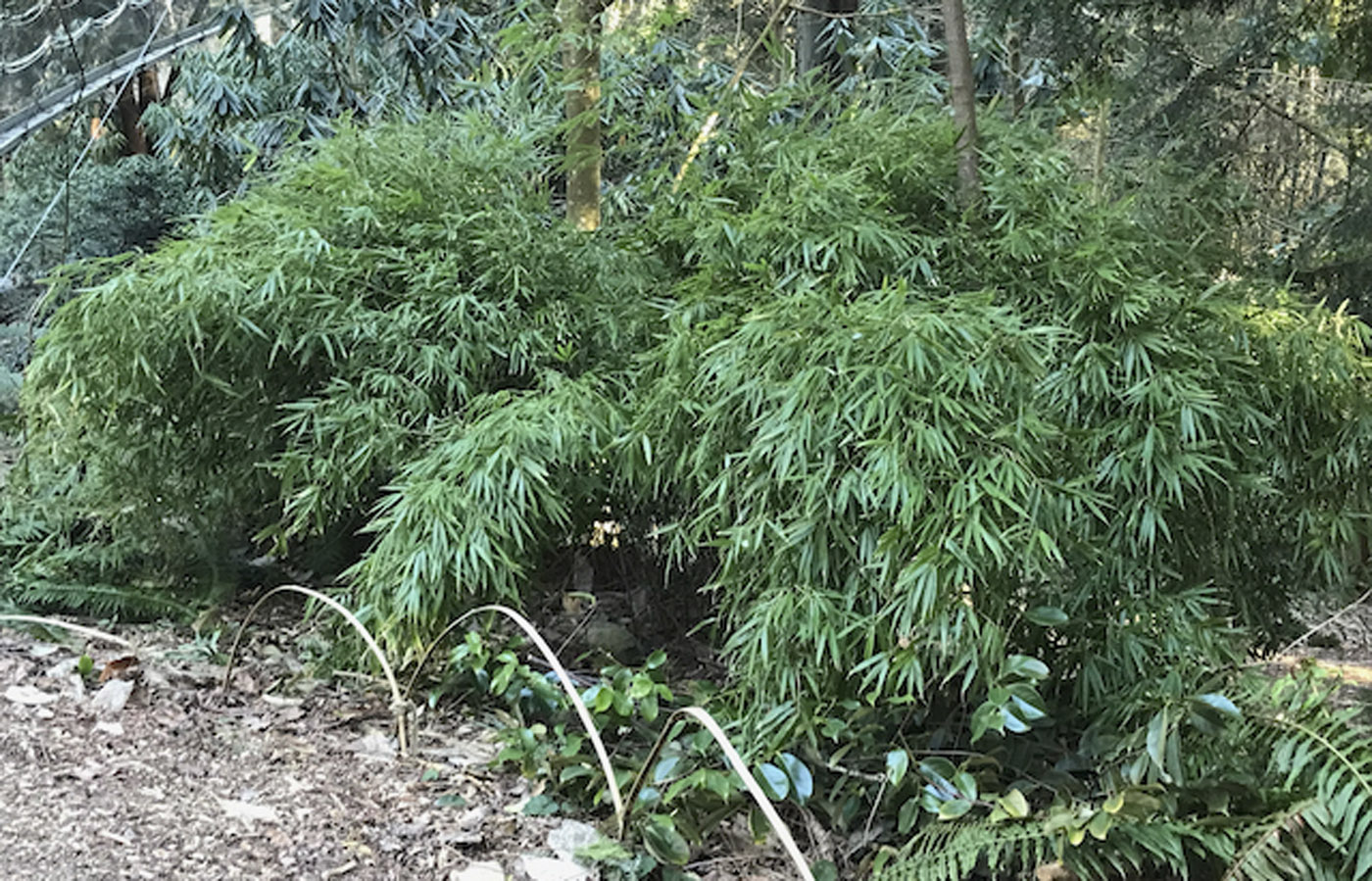 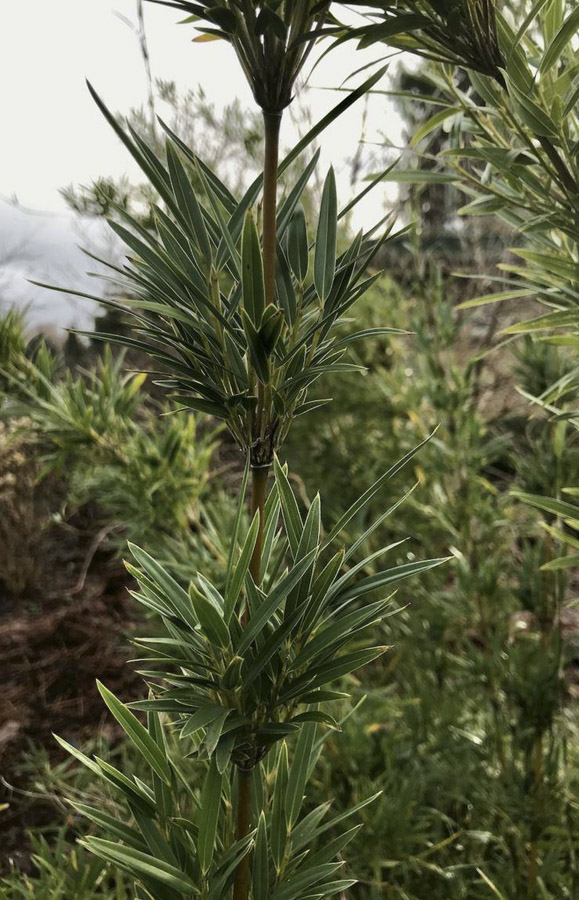 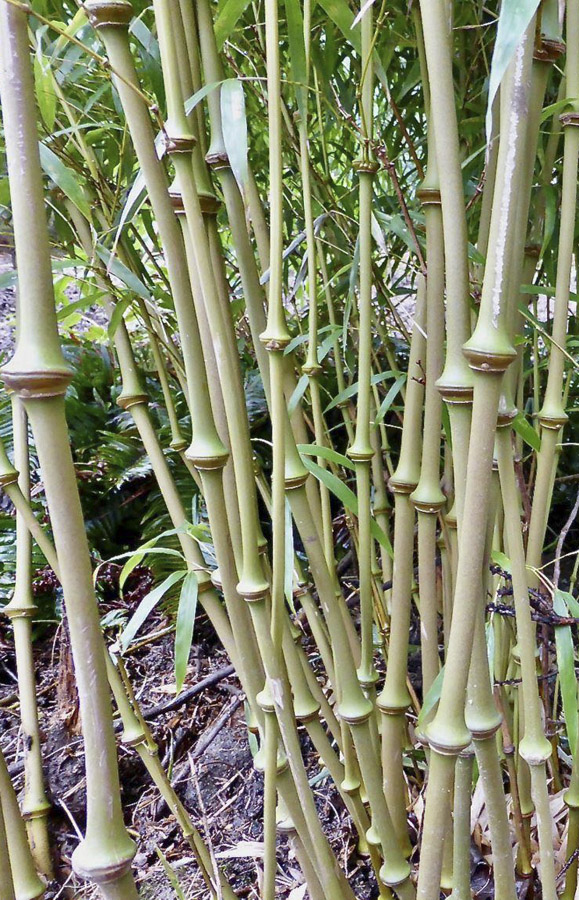 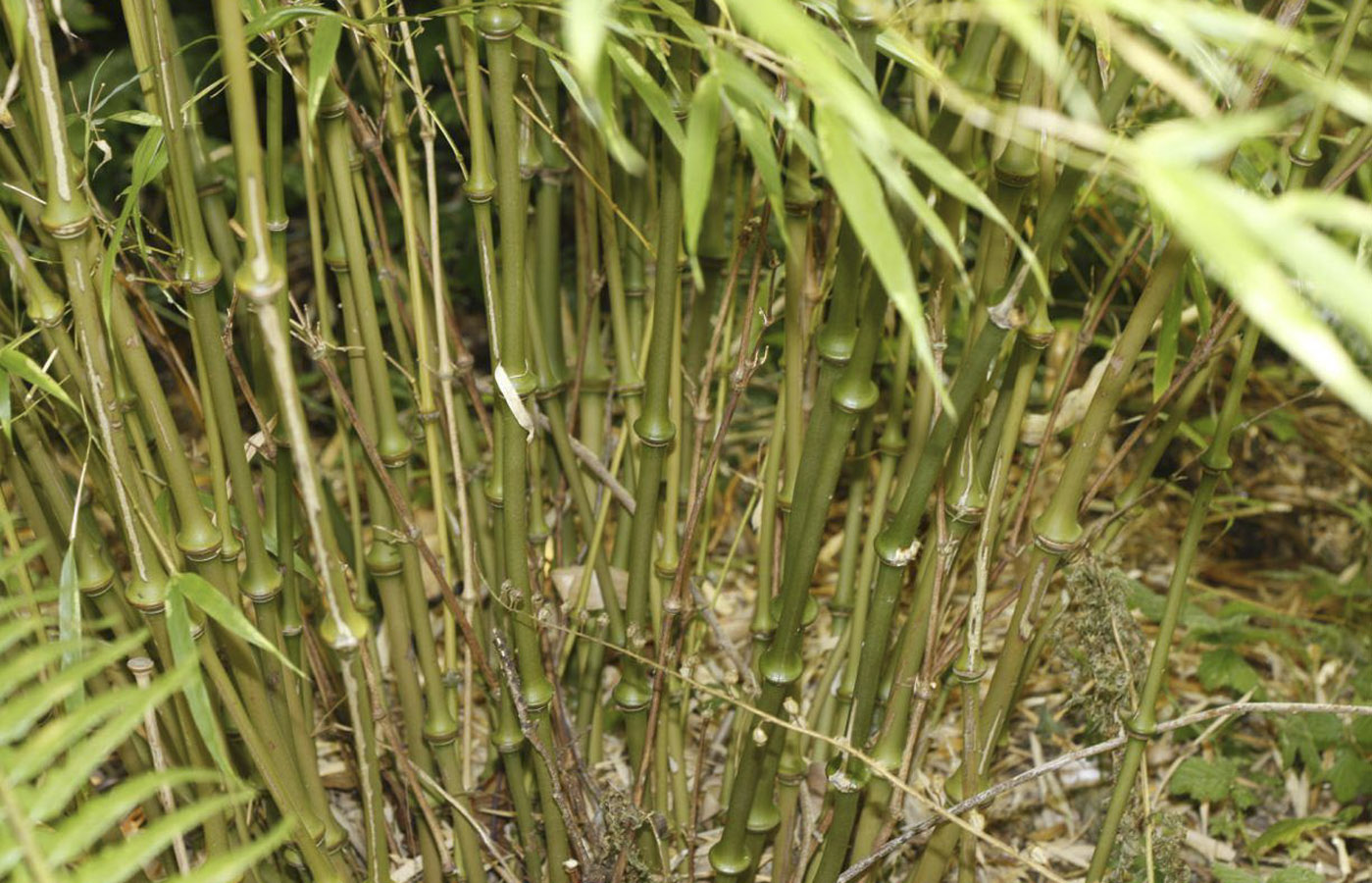