It is impressive how plants in the Garden have fared, given the sudden, deep plunge into freezing weather we experienced mid-January this year. According to our own digital temperature sensors—a feature of the recently installed Argus system that coordinates and monitors aspects of the irrigation system—the air temperature dropped to its lowest in the David C. Lam Asian Garden on January 14th. Across the recording stations, the lowest recorded temperature was minus 7 C. This is the same reading that was recorded inside the Alpine House in the E.H. Lohbrunner Alpine Garden, although Alpine-Curator Laura Caddy had to observe this reading on an old-fashioned thermometer.

Temperatures in the open, away from the protection of glass houses or trees, were probably a couple of degrees lower than that. In the Asian Garden, we have sensors strategically located both above and below ground at a number of different sites, and these are all connected to a computer station in the administration building. At the same time as the lowest air temperature was recorded, the temperature at the soil surface below the “duff layer” (the loose, organic matter that naturally collects beneath established plantings), was 2 degrees above freezing—a 9-degree difference between the air and the ground level temperature.

While the January chill was not a “deep freeze” of the same magnitude as in some other years, we did experience five days where daytime air temperatures barely exceeded the freezing mark, and such prolonged cold can do considerable harm to vulnerable plants. And of course, even in March, winter isn’t over yet. Besides, there is always unseen cold injury that, once initiated, can develop into more significant damage.

Our ability to measure temperatures is not in itself protection from the cold, but it is exceptionally helpful in determining where and how temperature varies across the Garden. Nevertheless, despite the frigid dip in temperatures, many seemingly vulnerable plants appear to be doing well.

Several plants in the E.H. Lohbrunner Alpine Garden, particularly in the South American, Australasian and African sections, are considered risky bets for surviving harsh winters. Such plants are not considered as dispensable or disposable. Rather, it’s important to continuously assess the hardiness of unknown or presumed marginal plants (particularly as the climate is changing).

But again, this winter seems to have been more than a little kind, due in part to the light covering of snow when temperatures fell in January. Snow in the Alpine Garden is entirely analogous to the insulating duff layer in the Asian Garden (where little or no snow accumulated on the ground). Even considering the better than average conditions, one of the most welcome surprises this year was the survival of the South African tree heath, Erica oatesii, which has been blooming with sumptuous rich-red flowers since January. The heath sits beside and behind a shrubby evergreen persimmon relative, Diospyros austroafricana, near the eastern end of the African section. A rather nondescript bush, its real claim to fame is that it survives at all. This winter, it has never looked better. In fact, close examination of the stems shows hundreds of tiny flower buds.

Close by on the southwest facing wall of the Rosalind Sturdy Amphitheatre, a couple of different evergreen shrubs, characterized by their somewhat dubious cold-hardiness, have made it through the recent cold spell with little or no apparent damage. Lyonothamnus floribundus subsp. asplenifolius (fernleaf Catalina ironwood) is a Californian Channel-Islands endemic (i.e., it only occurs there) that grows to become a substantial tree in the wild. Here, if it survives, it may make a large, evergreen shrub, and we are pleased to see it establishing. Next to it and closer to the wall is Crinodendron hookerianum (Chilean lantern) a South American species noted for its dark green leaves and large, hanging crimson flowers. Both species benefit from the considerable heat retained by the rammed earth wall, and gain winter hardiness as they become established.

We have several plants that we consider winter “canaries in the coal mine.” An impressive example is Nothaphoebe cavaleriei. This handsome evergreen tree (at the top of the Service Road near the Plant Centre) is native to southwestern China and adjacent Indochina. In previous cold snaps, this tree has died back completely to the ground (three times since 1998). Another is the blue-berried, evergreen Hydrangea febrifuga (dichroa), although the seedlings derived from Andy Hill’s 2010 Sichuan collection are hardier than most. A new planting on Lower Asian Way at Stearn Trail—vulnerable because it was planted out just months ago—survived the winter completely unscathed. Another of Andy’s collections, but from Vietnam, is an evergreen stewartia, Stewartia pteropetiolata with red, winged, leaf stalks. Both Andy’s collection and a commercially-sourced plant (from seed from southern China) are undamaged and looking happy in the bed to the east of the Moon Gate. This is a species we have lost before from the cold, so whether their good health can be attributed to elevation and geographical origin, climate change or just good weather, remains to be seen.

A final example of our Asian Garden tree “canaries” is Castanopsis carlesii (Carles’ chinquapin) from southern China and Taiwan. This is one of the most attractive of all the Asian chinquapins. These oak relatives are normally massive evergreens that inhabit subtropical and tropical broadleaf Asian forests. Although C. carlesii is a magnificent species noted for its small, glossy leaves, the foliage and young stems are often badly damaged by temperatures below minus 7 degrees. But this year, our tree, which is located at the western edge of Meyer Meadow, appears to have dodged that frosty bullet. 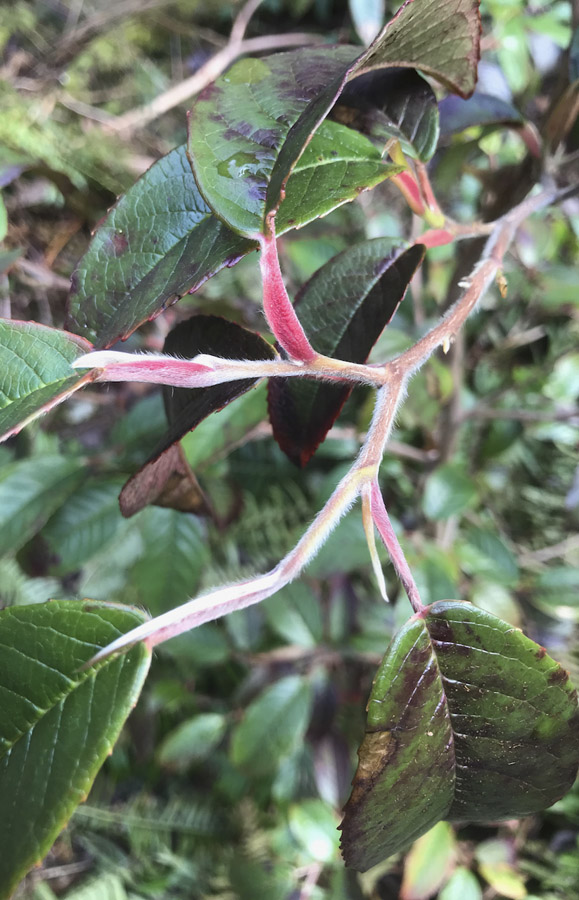 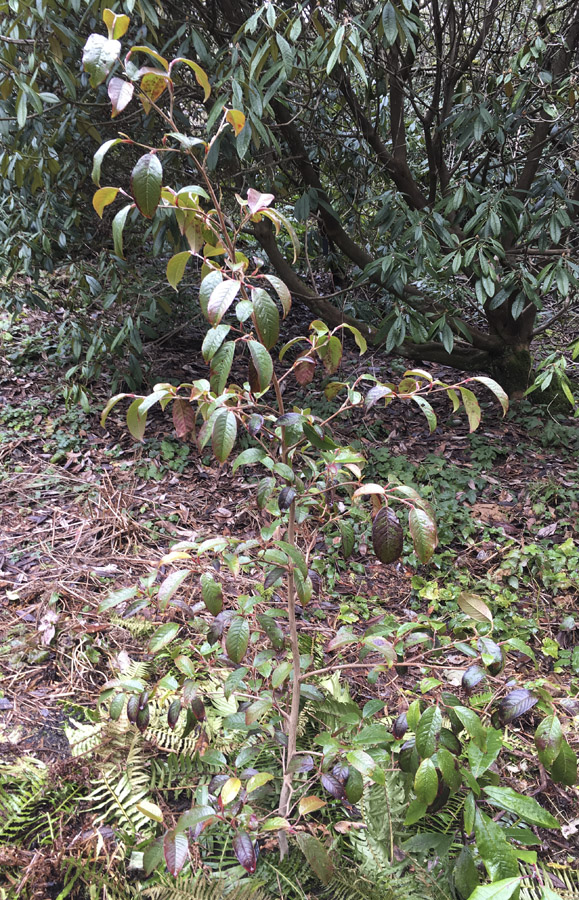 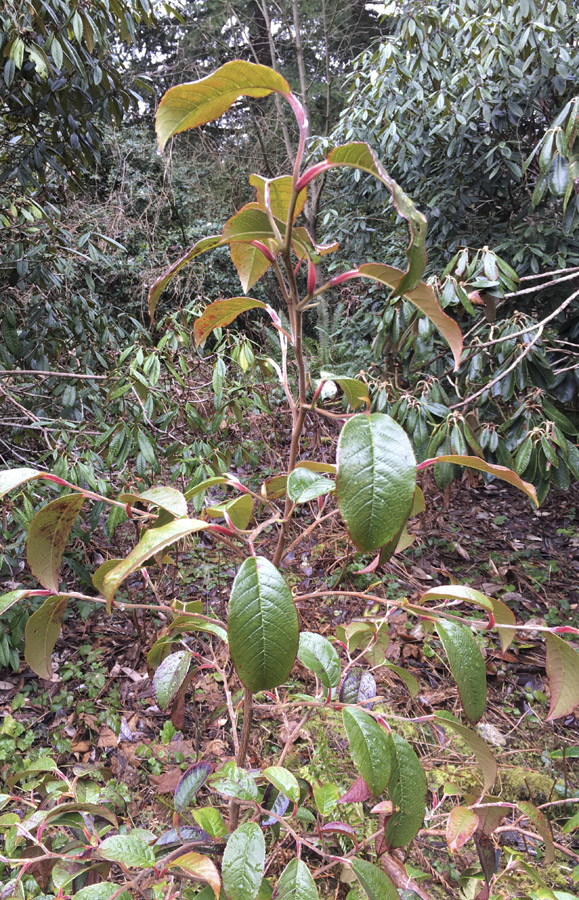 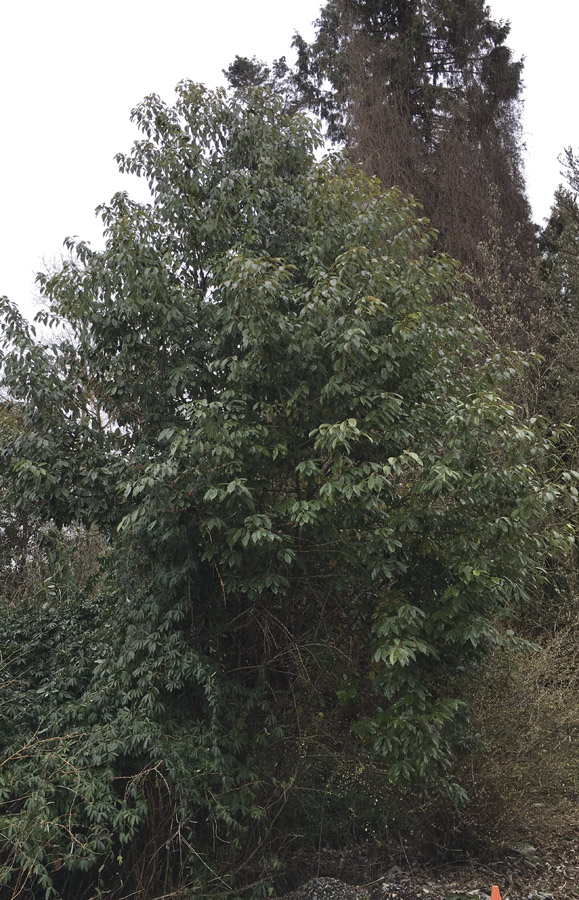 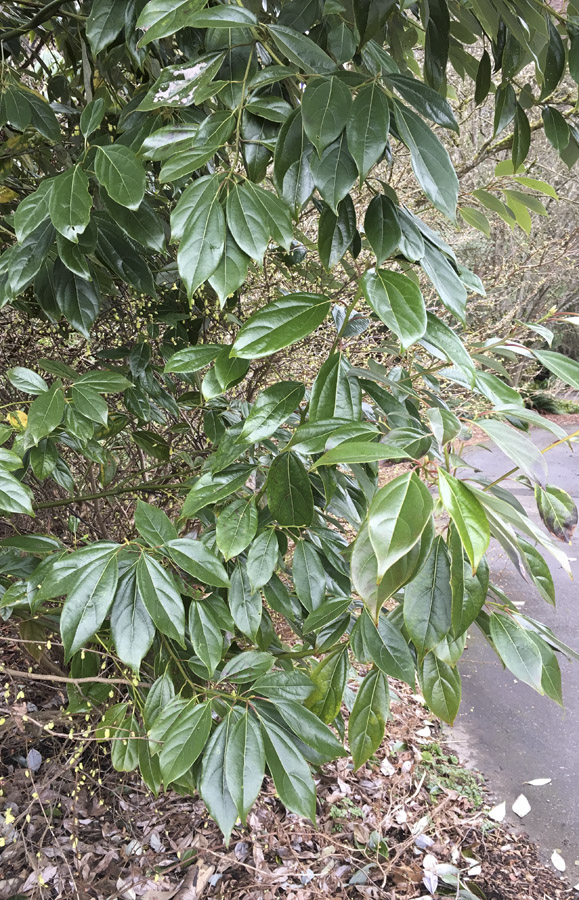 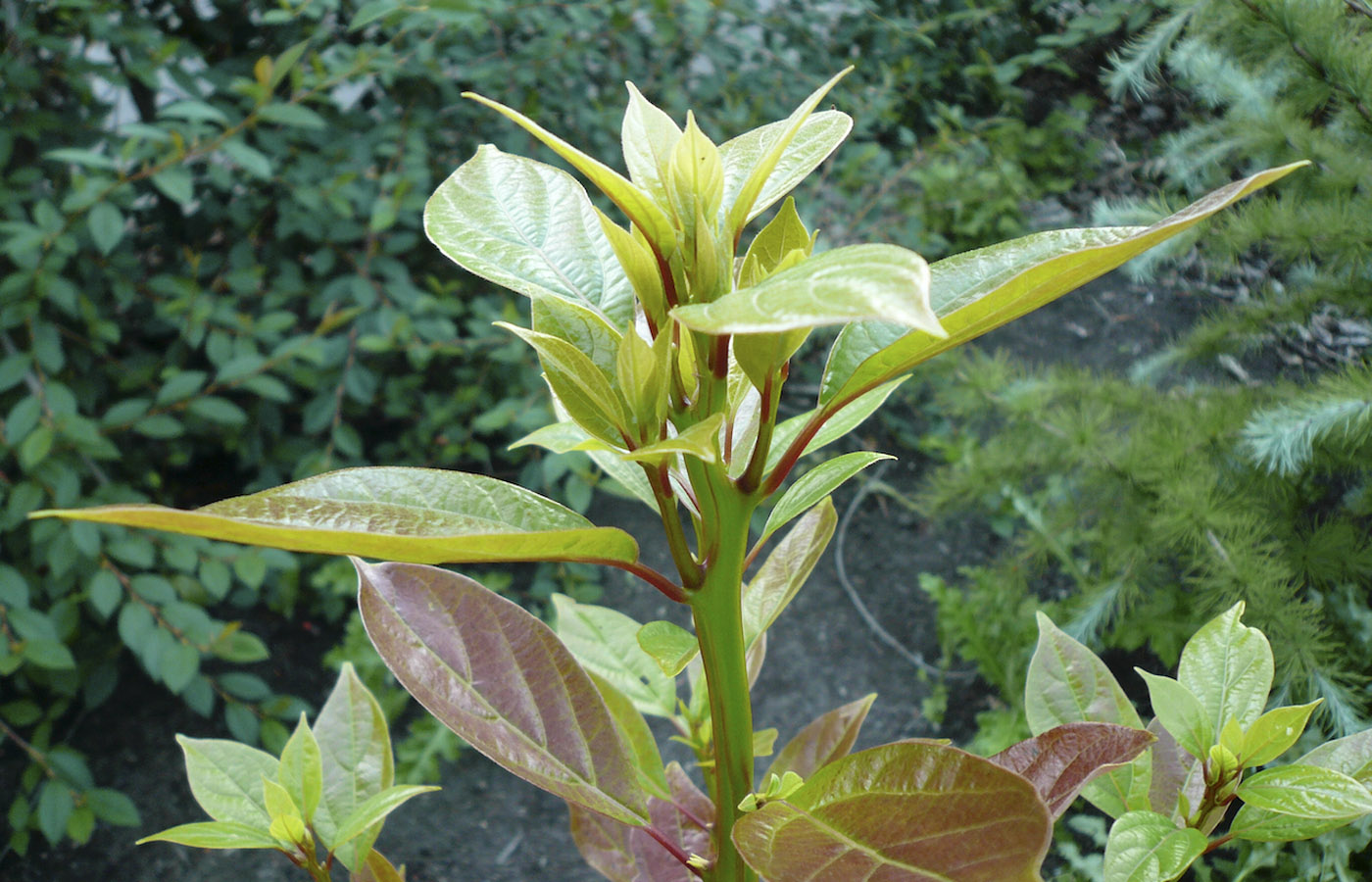 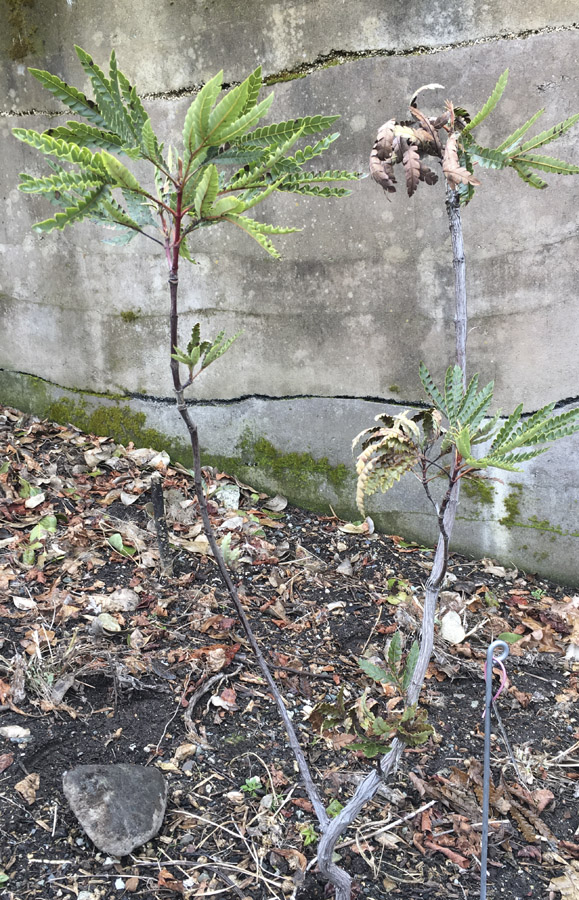 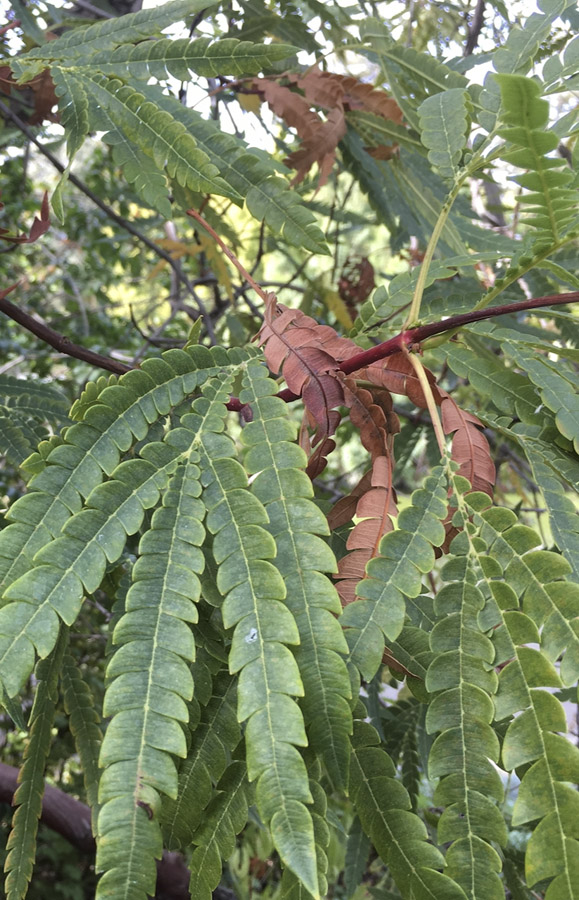 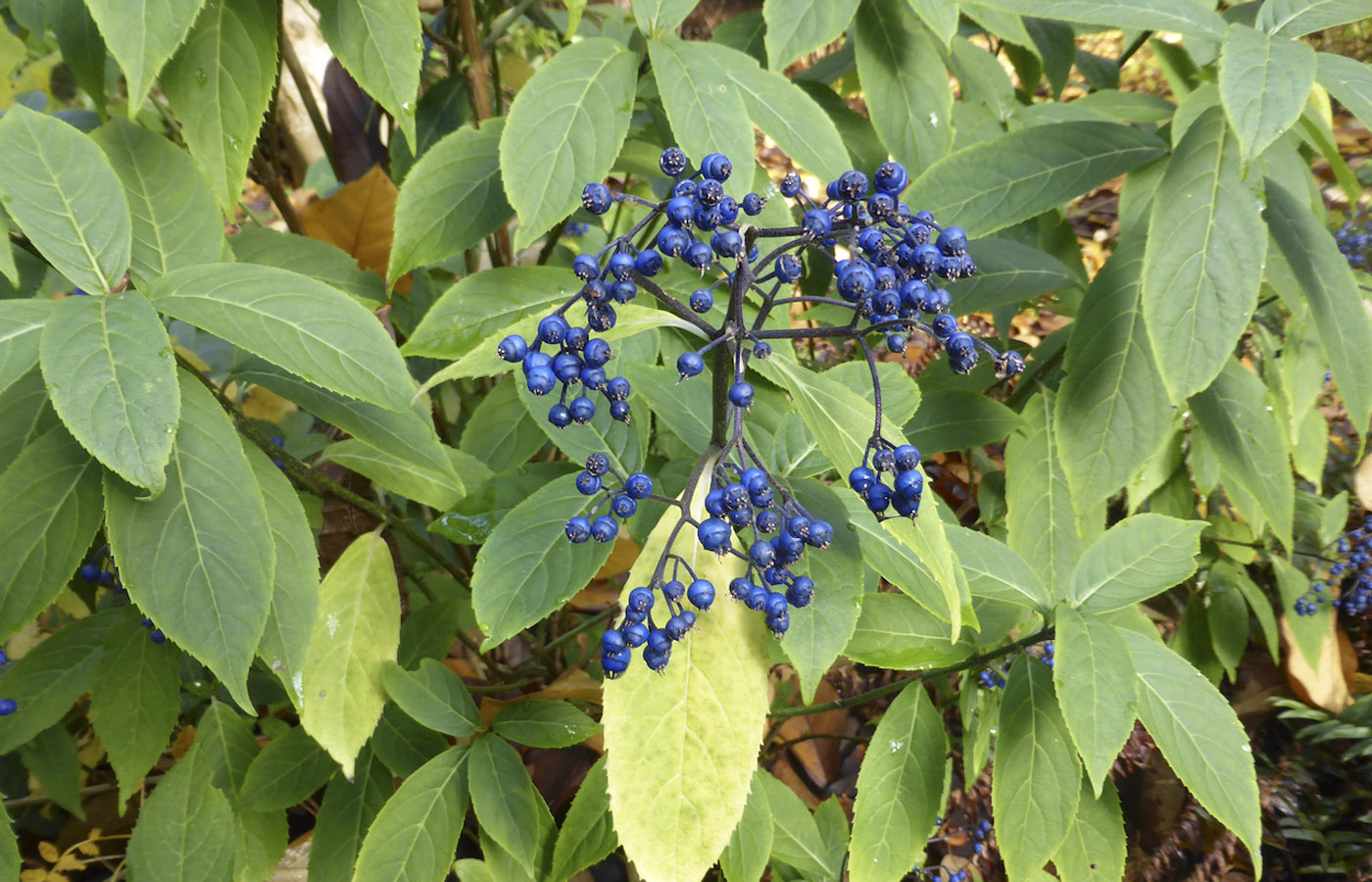 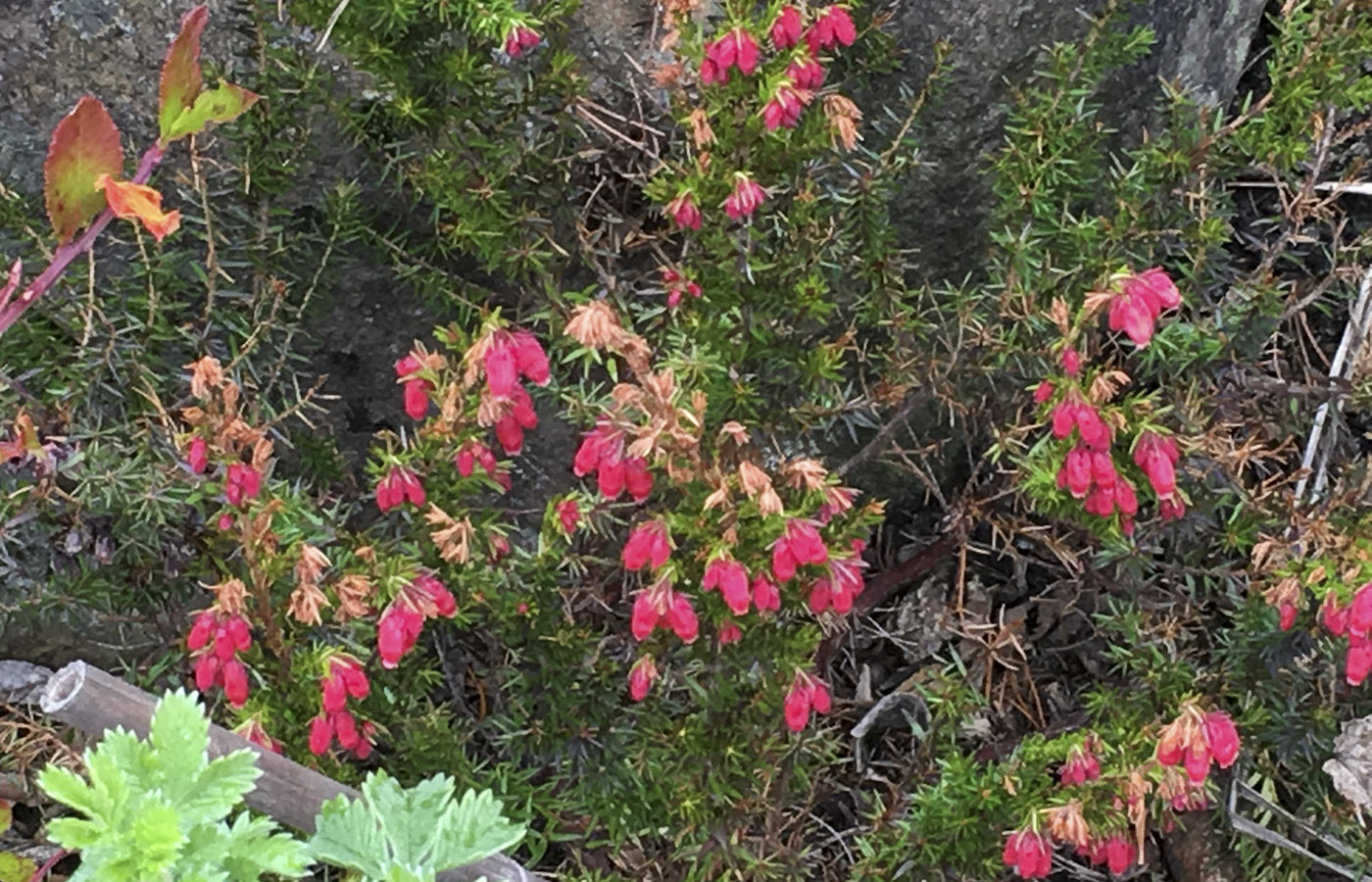 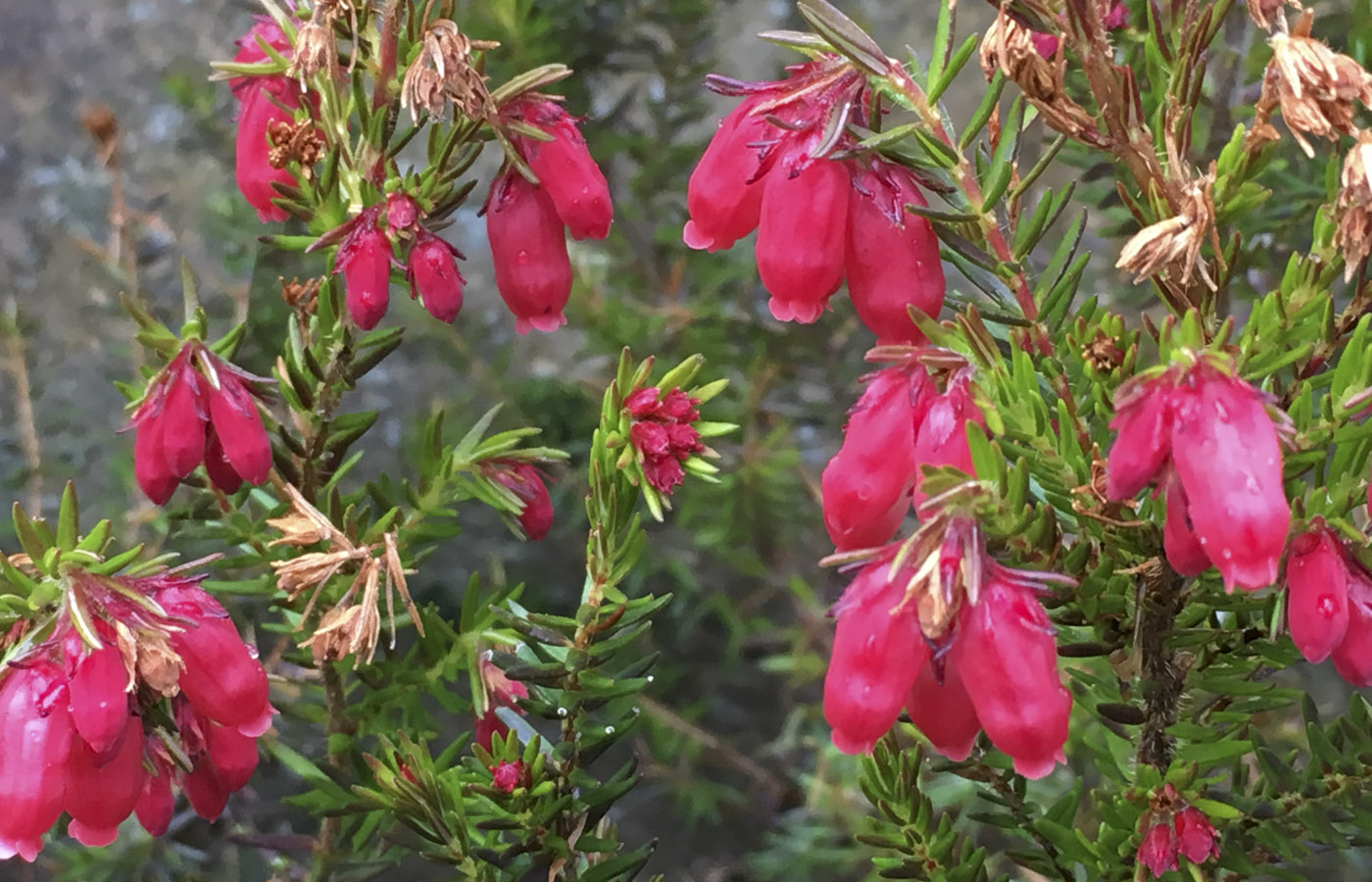 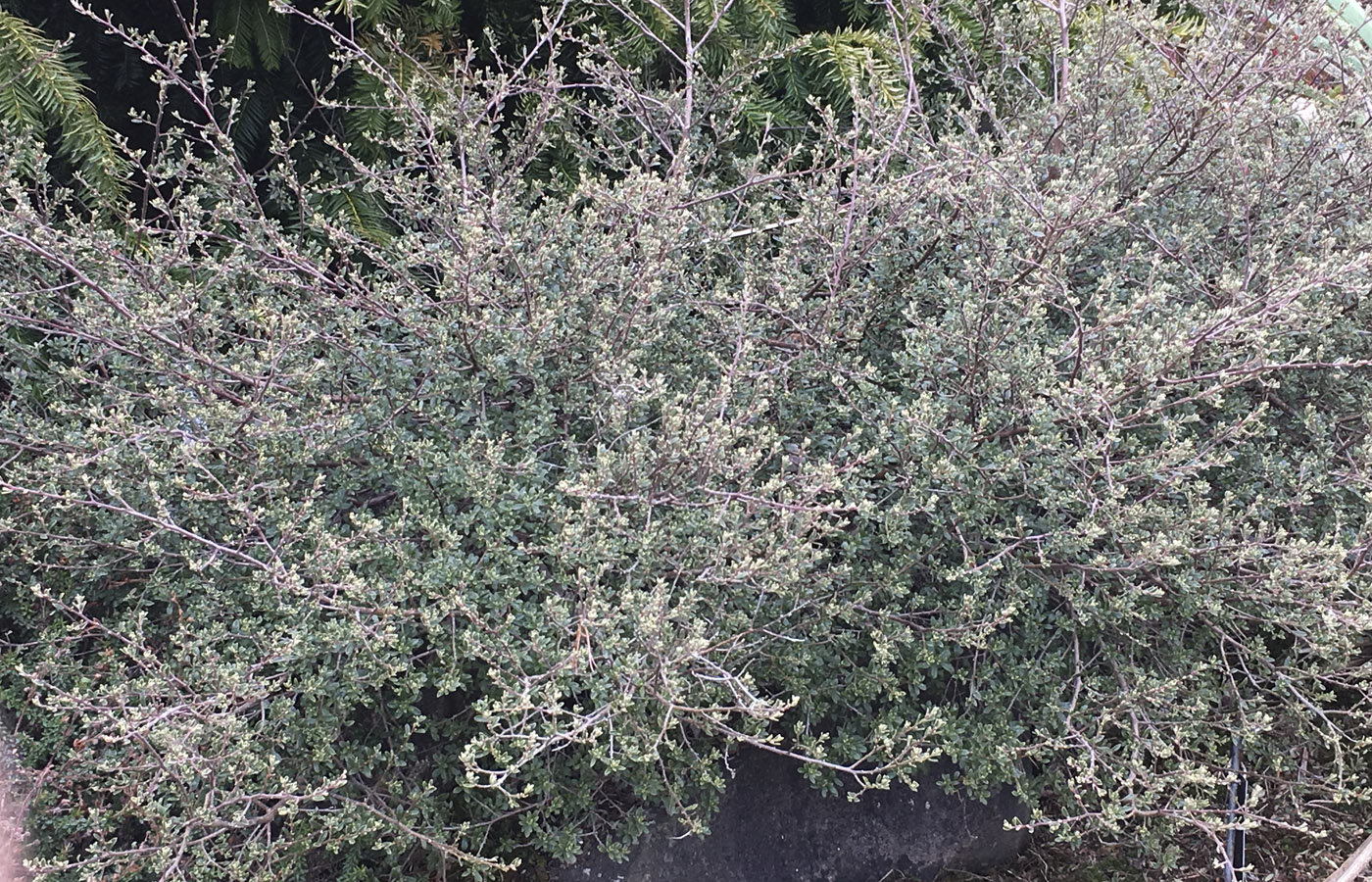 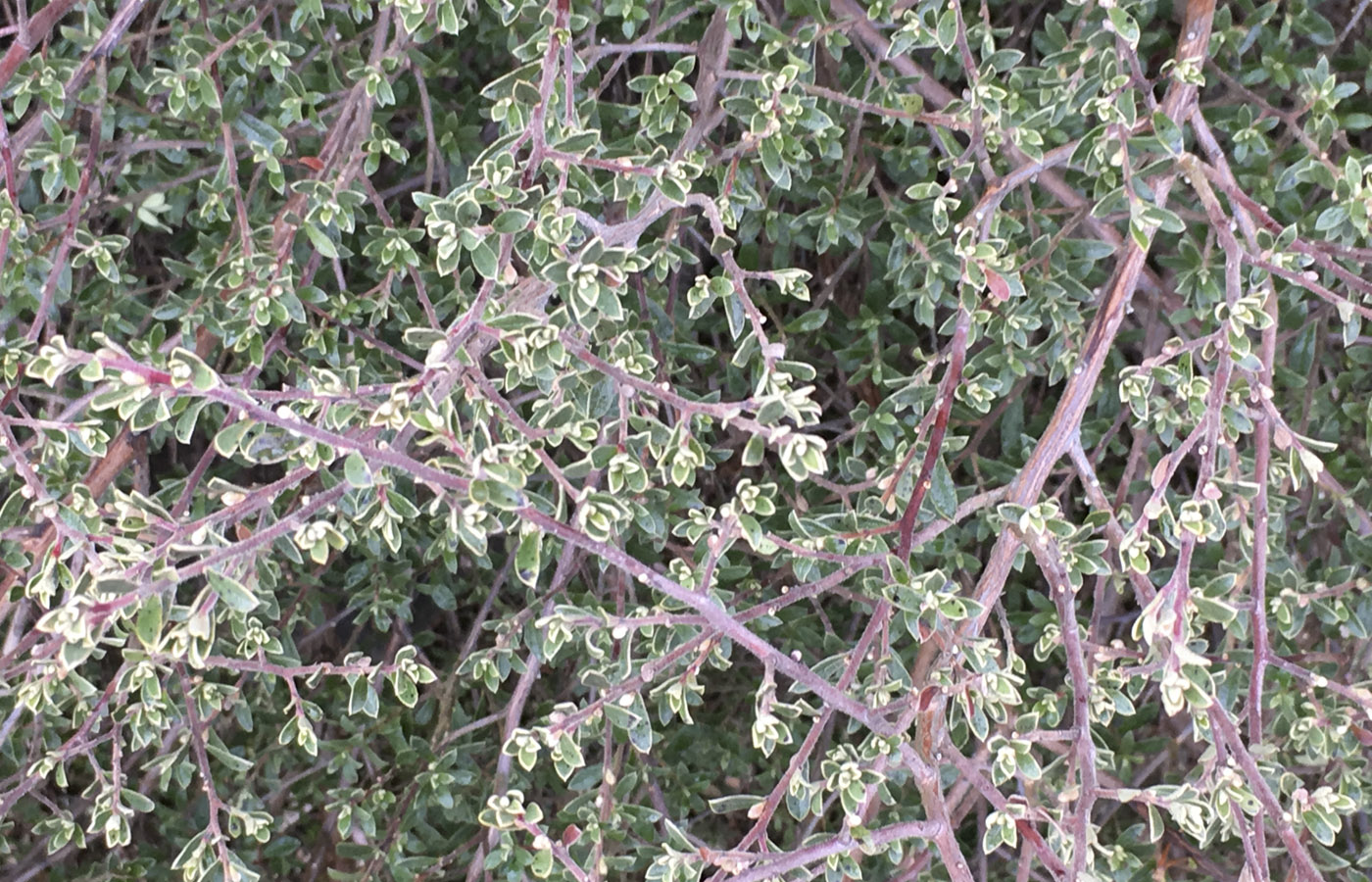 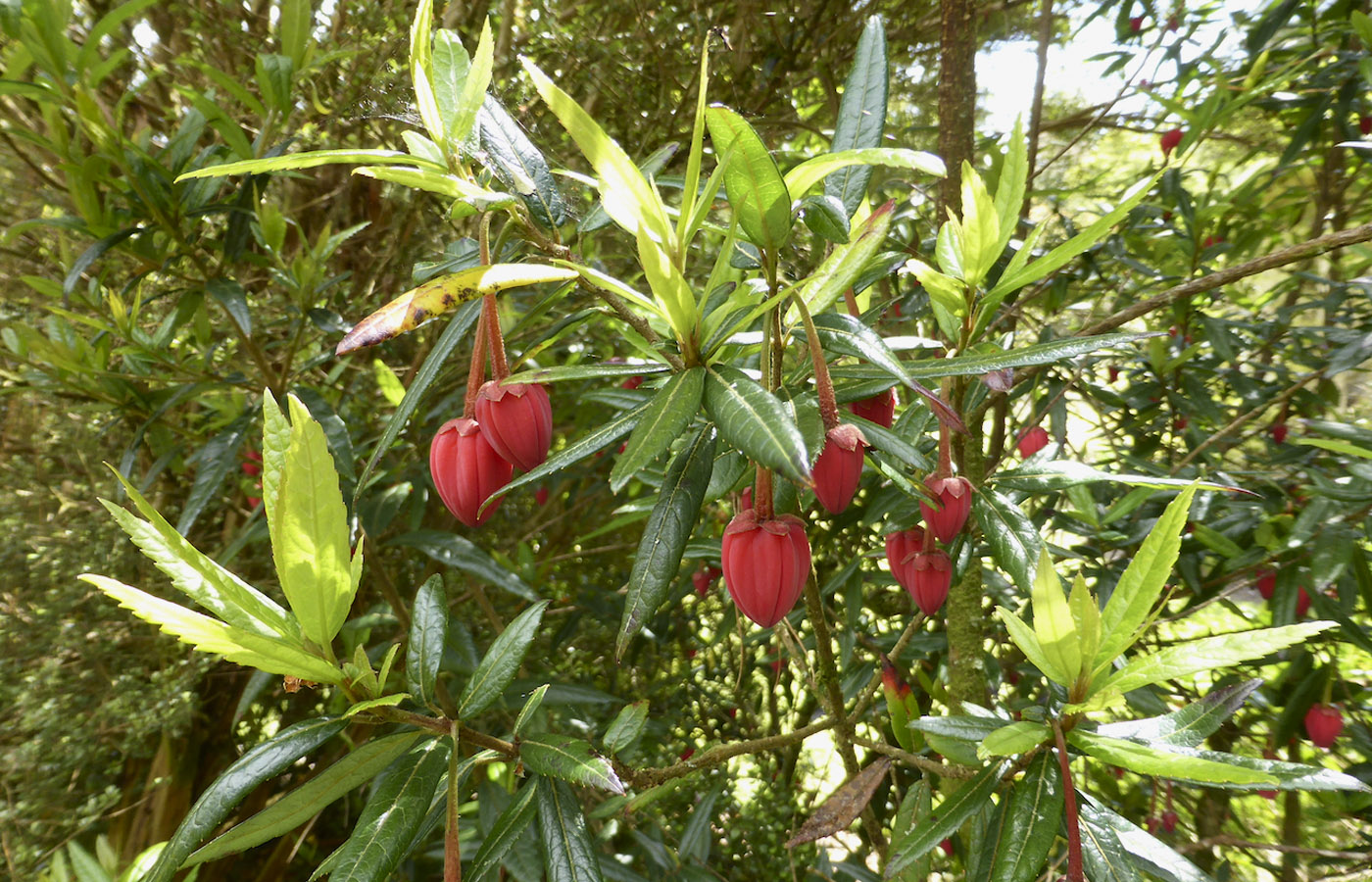 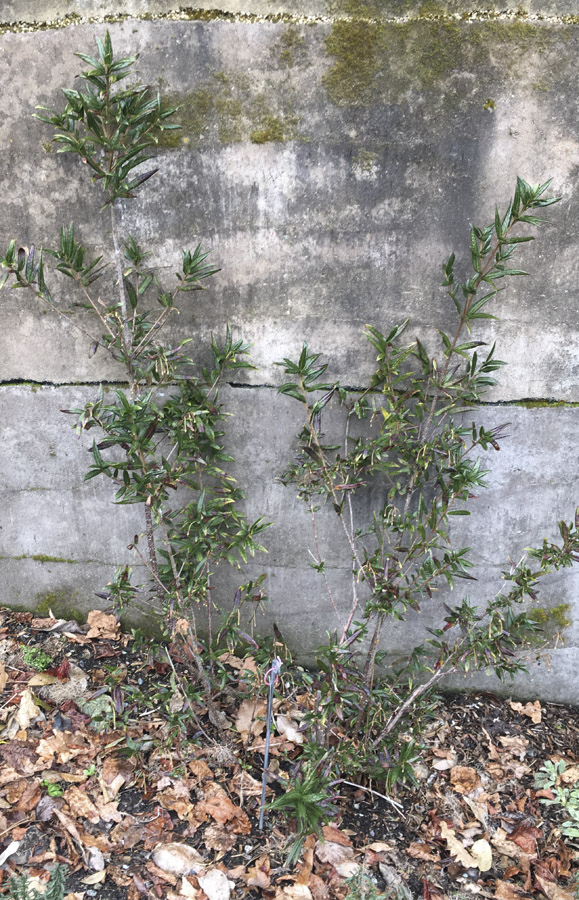 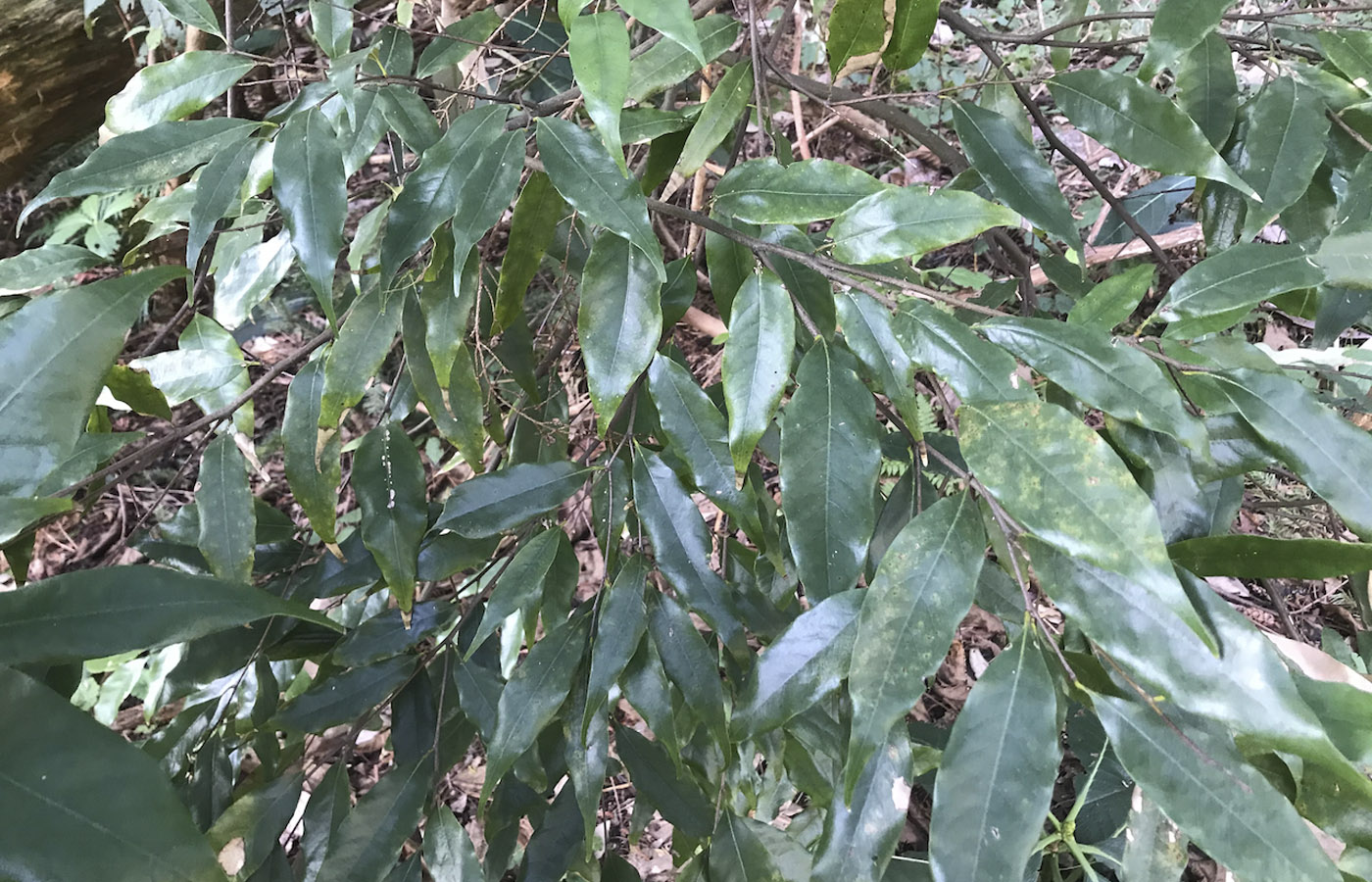 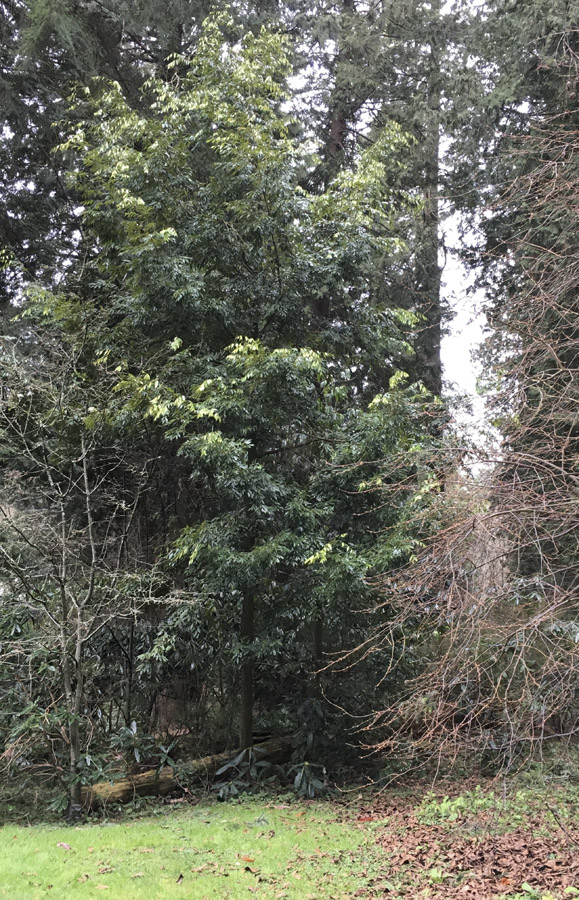