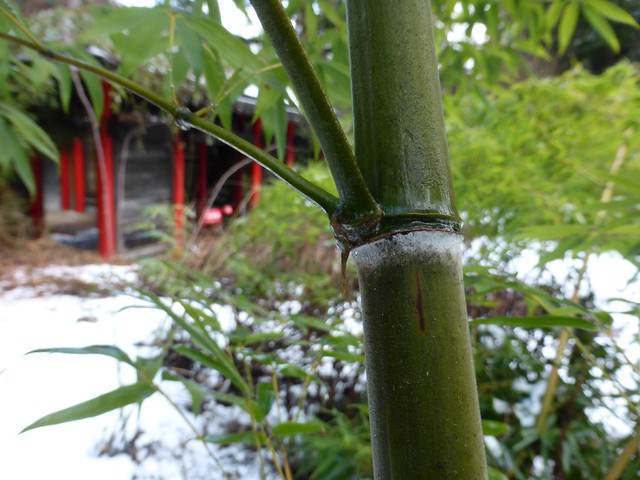 As this past February was the coldest on record for Vancouver, I am continuing with the theme of cautious weather forecasting. I will refrain from predicting the normal March flowering regime, which would include (at a minimum) magnolias, primulas, rhododendrons and a wide variety of bulbs. Instead I’m falling back on another group of broadleaved evergreens. Better safe than sorry—and anyway, I seldom have occasion to highlight plants that don’t have showy flowers.

The bamboos are a group of mostly attractive broad-leaved evergreens with comparatively narrow leaves. Bamboos are woody-stemmed grasses that grow from horizontal underground stems called rhizomes. The primary above-ground stems are known as culms. Both above- and below-ground structures are significant from a gardening point of view. The culm—its colour, size, abundance and texture—is generally the bamboo’s most noteworthy feature. But the nature of its rhizomes determines whether a bamboo spreads or stays put, and this is an obviously important factor in determining where and how to grow these plants.

Flowering in bamboos is another interesting feature, but one that is poorly understood. At least among cultivated bamboos, flowering is more or less synchronous within a species (all individuals of the same species flowering at the same time, more or less), and there is always a long, often decades-long, interval of vegetative growth before flowering. This phenomenon is known as mass flowering and is generally followed by the production of seeds and the slow death of the plant.

The Botanical Garden’s bamboos are, by virtue of their age, becoming increasingly visible as a collection, particularly in the David C. Lam Asian Garden, where nearly all of the species are housed. There are approximately fifty different kinds of bamboos here, equally split between clumping and running types. The largest bamboos in the garden are running bamboos and include a number of Phyllostachys (groove-stem bamboo) species. Phyllostachys edulis (moso bamboo) has dull, grey-blue culms and a surprisingly aggressive nature. There is a plant on Upper Asian Way, immediately west of the Moon Gate. In an attempt to deal with its wandering proclivities, the area around our plant has been blocked on one side by a semi-circular, sand-filled trench, which allows for the “easy” severing of its rhizomes when they push into the trench. The trench was undertaken last year after we discovered new culms emerging some 6.5 m (20 feet) away from the main clump of culms! In warmer climates, established plants can produce 20-cm (8-inch) -diameter culms up to 20 m (62 feet) tall.

One of the showiest of the timber bamboos is P. bambusoides ‘Castillonis’ (Castillon bamboo). This bamboo features golden yellow culms that are interrupted by wide and narrow, bright green, longitudinal bars. While this seems like an unlikely colour configuration, it’s actually a common variegation pattern in a number of large bamboos. The species (P. bambusoides) itself can grow to 22 m (65 feet) tall with 15-cm (6-inch) diameter culms, but we expect our plant to attain only about half that size. The plant is on the fence line, directly west of the western terminus of Campbell Trail (i.e., west of Beer Trail). It was planted in 1998, but in its early years struggled against a continuing onslaught of slugs, which regularly feasted on its emerging shoots. The slugs seem to have lost their taste for these bamboo shoots and the plant is now thriving both inside and outside the fence. Ironically, though, the plant is now beginning to produce flowers, and these, as already mentioned, indicate the imminent demise of the colony.

Among the fastest growing of our bamboos is P. vivax (Chinese timber bamboo). This species is well known for its thin-walled culms, which are harvested across Asia for their edible shoots. When allowed to grow to full size, the glossy green culms rocket skyward but as the leaves emerge and the long, side branches develop, they culms droop with the weight, even sometimes bending to the ground. Under ideal conditions, the species rivals P. bambusoides in size, but in windy areas, P. vivax is easily recognized by the high proportion of culms that are shattered or broken. Look for this species on Flannagan Trail east of Farrer Trail.

At the other end of the spectrum are the clumping bamboos. A number—primarily Fargesia and Borinda species—are famous for being the favoured food of giant pandas. Fargesia scabrida (orange stem bamboo) is currently the largest clumping bamboo in the Botanical Garden. It produces stiffly upright blue-green culms with persistent papery, orange-brown sheaths (sheaths are modified leaves that protect the vulnerable, expanding stems). Our specimen stands at the corner of Kingdon Ward Way and Lower Asian Way.

A closely related species, F. robusta (giant fargesia) is planted on the west side of the Garden Pavilion, amongst a planting of Nandina domestica (heavenly bamboo). Nandina is not a bamboo at all, but a member of the barberry family. The giant fargesia is only a few years old, but we expect it will form a clump much like that of F. scabrida, with slender, stiffly ascending culms to about 6.5 m (20 feet) tall. Both species have small, tough, bright green leaves, but the culms of F. robusta are bright green, turning to butter yellow in the sun, and the straw-coloured to creamy-white sheaths are more quickly shed.

Our most impressive clumping species is arguably Borinda fungosa (chocolate borinda), a massive plant with slender, elegantly sprawling, chocolate-brown to green-brown culms and attractively pendulous leaves. Unlike in Phyllostachys, which have spring-emerging culms, fargesias and borindas produce their culms in summer or autumn. In B. fungosa, these are mostly upright and unbranched in the first year, and adorned with persisting pale grey-brown culm sheaths. Our plant typically produces a few white-variegated or entirely white leaves, especially on the late-shooting culms, but the variegation generally disappears by the following spring or summer. Look for this elegant bamboo at the corner of Campbell Trail and Beer Trail.