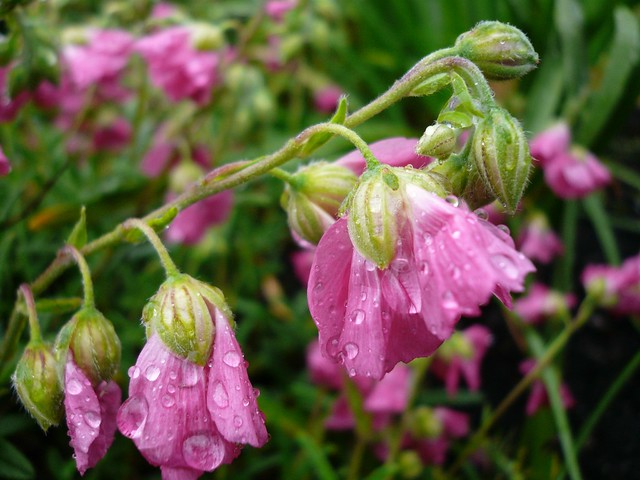 For more June photos visit our forums. Garden volunteer Wendy Cutler has started a forum thread of photos of plants featured in this blog. Please post your own photos of thee plants in our garden in the thread.

This year, much of what we would expect to see in bloom in the garden in June has already begun flowering in May. This was after a particularly cold, slow start in March and April. In any case, we can still expect to see a wide range of flowers this month.

High on my list of must-sees (and must-smells) is Rosa filipes ‘Kiftsgate’. This is an outstanding climber, now more than 20 metres into a large Douglas fir at the corner of Forrest and Rock Trails in the David C. Lam Asian Garden. In June ‘Kiftsgate’ smothers itself in creamy buds that open into large rounded clusters of perfumed white blooms. These are followed later in the summer by a spectacular display of small red fruits. The cultivar name refers to the garden where it originated, Kiftsgate Court, in Gloucestershire, which is next door to the famous Hidcote Manor Garden. Another climbing rose, less well-known and certainly less vigorous, but no less fragrant, is R. helenae, an orange-blossom-scented rose that rambles loosely over a large Acer japonicum on Upper Asian Way near Henry Trail. Its beauty for me recalls Helen of Troy, but it was actually named for the wife of the collector Ernest “Chinese” Wilson, who possibly felt the same way. The hips of R. helenae are more narrowly egg-shaped than those of R. filipes, and are a bright orange-red. Both species have viciously sharp hooked prickles that allow the long, clambering stems to climb up and over shrubs and into the branches of trees.

My favourite cranesbill, Geranium renardii is often mostly finished flowering by June, but the leaves are so beautifully distinctive. The neatly rounded, sage-green leaves have five to seven broad, rounded and barely toothed lobes, and the surface of the leaves is velvet-like and finely textured—the technical term for this kind of texture is bullulate, meaning bubbly. The flowers are white with purple veining. There are several plants in the E. H. Lohbrunner Alpine Garden, in Asia Minor, below the Acer griseum (paperbark maple). In terms of wow-factor, few cranesbills can compete with the magenta flowers of G. psilostemon (Armenian cranesbill), which is a dependable June-flowering perennial. In contrast to G. renardii, the Armenian cranesbill produces its flowers on tall stalks (sometimes more than 1 m), well above the sizeable mounds of foliage. Groups of these are to be found on Upper Asian Way at Stearn Trail with Rosa ´ odorata ‘Mutabilis’ and beyond the Moon Gate. Another attractive cranesbill is Geranium himalayense ‘Gravetye’ (named for Gravetye Manor in E. Sussex, home of the famous plantsman William Robinson, author of the seminal The English Flower Garden). ‘Gravetye’ is renowned for its azure-blue, violet-centred flowers. Seedlings of this cultivar, which don’t appear to differ much from the original cultivar, mix together with another blue cranesbill, the conspicuously hairy Geranium platypetalum. Geranium platypetalum has broader, more purple flowers and often forms hybrids of intermediate appearance with G. renardii when they are grown in proximity, but not with G. himalayense. Visitors can see the two blue geraniums mixing it up down Upper Asian Way, just inside the garden entrance and down the hill toward Rehder Trail. In the Alpine garden at the bottom of the European section is a fine example of a G. platypetalum ´ G. renardii hybrid known as Geranium ‘Philippe Vapelle’.

Huge numbers of colourful plants come into their own in early summer in the Alpine Garden. The African section is ablaze with cranesbills, Cistus species (rock rose), Helianthemum (sun rose) and various Kniphofia species and seedlings (torch lily or red-hot poker) in a range of saturated colours. The amazingly hot-pink Brunsvigia radulosa (South African candelabra flower) (in the bulb frame) and the startling orange Crocosmia masoniorum (montbretia) give an added jolt to the landscape. Meanwhile, in South America near the top of the Alpine Garden, Lobelia tupa (devil’s tobacco) is beginning its amazing bloom period, which can extend to eight weeks or more. The flowers of L. tupa are adapted to hummingbird pollination, being bright red and tubular, with a nectar reward inside at the base of each flower tube. In a good year (i.e., after a mild winter), the stems of this perennial can grow to 2 m or more, the ruby flowers radiating around the upper parts of the stems above ample velvety angular leaves. Hummingbirds are never far away from a plant in bloom.

Cooling off back in the Asian Garden, observant visitors can watch out for flowers on magnolias. Those appearing on our evergreen species from China and Vietnam are a varied lot; some are flowering as early as April, while others delay until early or mid-summer. We are still waiting to see flowers on a number of species, but take some comfort in knowing they we’re lucky to be able to grow them at all, as most are native to much warmer areas in Asia. Take note: these flowers are not so obvious as the flamboyant, earlier spring flowers of the deciduous magnolias, nor the sumptuously substantial flowers of the American evergreen, M. grandiflora (the flowers of which mostly come later). To date, our latest Asian magnolias to flower include Magnolia chevalieri (southern peace lotus tree) and Magnolia conifera (Ching’s manglietia). Both species are native to southern China and Indochina and belong to the subgenus Manglietia, which is sometimes listed as a genus in its own right. Their fragrant, creamy white flowers appear briefly in June or July. In M. chevalieri, the billiard-ball-like flowers are best seen from above, while the flowers of M. conifera, which hang downward, are best viewed straight on or from below. In the manglietia group individual flowers consist of about nine overlapping creamy white tepals, the outer three reflexing backwards (in M. conifera, this means upwards) as the flowers open. Magnolia chevalieri is located immediately behind the bench on Rock Trail, while M. conifera, which is named for the shape of its woody fruits (they look like pine cones hanging from the tips of the branches), can be seen in the background from Ludlow Trail, a few steps up from Lower Asian Way.