This has been a particularly good year for both flowers and foliage, and while many have unfortunately not been able to appreciate it, the Garden’s collections have been nothing short of spectacular. While most of us were staying home enjoying our own and neighbourhood gardens, curators and horticulturists have been working hard to keep UBC Botanical Garden looking great.

In celebration of its impending reopening, I’ll be stepping back into the Garden to describe a few of the outstanding plants. As many of you know, the Botanical Garden is filled with treasures, some familiar, some exotic, some rare and extraordinary, and many of them worth discovering. I may have overdone it a little this time but hope that readers will forgive my enthusiasm, as there are so many plants worth talking about. I will also be continuing with the “Common Plants In the Neighbourhood” blog post series, as I have for the last thirteen weeks (not that I’m counting). I would never discourage anyone from carrying on with their neighbourhood walks, but happily, I can now also invite members to stroll UBC Botanical Garden’s broad pathways to once more enjoy verdant and flower-filled beds. Here is a sampling of what’s in store in the Garden this July.

One might imagine a walk through the David C. Lam Asian Garden at this time of year might be less interesting than in spring, when so many rhododendrons, camellias and deciduous magnolias are flowering, but that would not be the case. The early floral exuberance has been replaced by foliar luxuriance, but there are still plenty of flowers in the Asian Garden. Sometimes, all you need is to slow your pace and look in different places to see just how richly endowed the Garden really is.

For example, there are plenty of climbers in flower in late June and July. The giant yellow honeysuckle, Lonicera tragophylla, with its astonishing 10-cm (4″) -long, flaring golden flowers embraces the west side of a western red cedar where Stanton Trail meets Upper Asian Way. If you’re not willing to look up at least 15 m (48′), you’ll miss it completely.

And of course, there are still roses in flower. Rosa filipes ‘Kiftsgate’ is among the latest flowering and also probably the tallest in the Garden (at Siebold and Forrest Trails). The flowers are easily visible from Lower Asian Way and their powerful fragrance readily detected downwind for 50 m (160′) or more.

Of more moderate height at only 7 m (22′) and without a discernable scent is the specimen of Hydrangea heteromalla (tree hydrangea) at the corner of Lower Asian Way and Campbell Trail. The number of pure white, lace-cap flower heads on this 1979 planting is nearly overwhelming. On the other hand, there are plenty of herbaceous plants in the Asian Garden that are just starting to open their flowers (the rich diversity of irises and primulas come to mind). Inula magnifica (majestic elecampane), with its saucer-sized, narrow-rayed daisy-flowers, should be in fine fetter for the next few weeks. While not the largest of the elecampanes, it is still a very big plant, up to 2.5 metres (8′) tall and bearing huge floppy leaves. Basal leaves can be more than a metre (3′) long and 60 cm (2′) wide in rich, moist soil. The huge flowers are borne in flattened clusters at the top of the plant, and these open in succession from flattened artichoke-like buds.  There is a group on Lower Asian Way at Farrer Trail, and another patch along Kingdon Ward Way south of a strikingly blue-grey-foliaged group of Rhododendron cinnabarinum subsp. xanthocodon plants.

The E. H. Lohbrunner Alpine Garden is another thing entirely. The number and density of plants in flower there at any one time is truly amazing. The African section is ablaze in July, and Dierama species (wand flowers) are definitely in their ascendency now. With luck, the various plantings will continue to pump out their delicate bells for the next few weeks. There are forty or so Dierama species—all from southern Africa. The species are similar enough that a casual viewer could recognize them as all “of a piece”; yet, each has a particular charm. Dierama dracomontanum (Drakensburg wand flower) is one of the most striking, with its masses of rosy red bells drooping elegantly along curving, wire-like stems. Speaking of wand flowers, I doubt people will fail to notice the sprinkling of the pink-flowered hybrids in the African section, as well as the large planting of the same unnamed dieramas on the plaza at the Garden’s entrance.

Regular visitors to the Garden will undoubtedly detect changes around the Roseline Sturdy Amphitheatre since last summer. Horticulturist Tim Chipchar has been planting a wide range of exotic plants in this area, as well as making general improvements throughout. His planting of Phlomis samia (Samos Jerusalem sage), which inhabits the bed opposite the Sanctuary Garden, is certain to impress those with an eye for the unusual. Phlomis is a genus of perennials and evergreen shrubs in the mint family native primarily to the Mediterranean region and western and central Asia. Phlomis samia is native to the Greek island of Samos. As is typical for the family, stems are square in cross section, the leaves undivided and oppositely arranged, and the hooded flowers are arranged in dense whorls (technically, pseudowhorls) around the flower stalks. Phlomis samia produces mounding evergreen rosettes of grey-green heart-shaped leaves, before sending up stiff but leafy flower stalks in the summer. All Phlomis are attractive, the species usually having either yellow or purple flowers. The flower stalks of P. samia are more elegant than most and the flowers are an unusual smoky pink.

North American Gardens Curator Ben Stormes recently alerted me to our specimen of Chrysolepis chrysophylla (giant golden chinquapin), which is located in the developing Pacific Slope Garden. The species is an oak relative—an evergreen—native to coastal Oregon, Washington and northern California. Giant golden chinquapin can be a spectacular plant, as it displays golden scales and hairs on its new stems and leaves, the scales remaining on the leaf undersides (chryso = golden + lepis = scale + phylla = leaf). In the wild golden chinquapin can grow to about 45 m (150′) tall, but the species is normally relatively slow growing. Our tree, which is barely 3 m (10′) tall, is in an area close to a number of specimens of another oak relative, Notholithocarpus densiflorus (California tanoak), as well as to several Quercus kelloggii (California black oak). These Cascadian natives are growing well on this open, well-drained site, and all are beginning to produce flowers and fruits. Like other members of the beech family, the flowers of the golden chinquapin are insignificantly tiny, and the fruit is a nut. In the oaks and tanoaks, the nut (known as an acorn) is partially enclosed by a cup, while in Chrysolepis and its close relatives, a spiny burr completely encloses a trio of nuts. This is much like in Castanea (sweet chestnut) and Castanopsis (Asian chinquapin), which are also close relatives. Golden chinquapin and tanoak show their typical starburst inflorescences in June and July, at the same time as last year’s fruits start to mature.

I’m certain that visitors passing by the Moon Gate will wonder about the flowering Meliosma cuneifolia (bubble-flower tree) that stands opposite. A rare, shrubby tree from southwestern China, M. cuneifolia has handsome 8- to 12 cm (3-5″) -long dark green leaves and arching stems. All Meliosma species have tiny, sweetly-fragrant flowers (meli = honey + osma = fragrance). They are typically borne profusely in large, drooping inflorescences.  The individual flowers have six tiny white petals and usually have five pollen-bearing stamens that ripen while still in the closed flower bud. When the flowers open, they do so explosively, releasing pollen from the already ruptured pollen sacs.

The common name bubble-flower tree is presumably inspired by the tiny flowers (in their frothy inflorescences) that pop open, expelling pollen like fizzy bubbles. The other common name, worm-head tree, derives from the oddly twisted, unexpanded, fuzzy leaves that make up the overwintering buds. The Chinese pao hua shu shu translates as “worm-head tree” (you’ll have to come back in late winter to see what that looks like). Our tree has never been so laden with flowers as it is this year. These will be followed by glossy, blue-black fruits in opulent, elongated clusters, and all manner of birds feast on the berries in September. Let’s hope we are all visiting the garden more regularly by then. 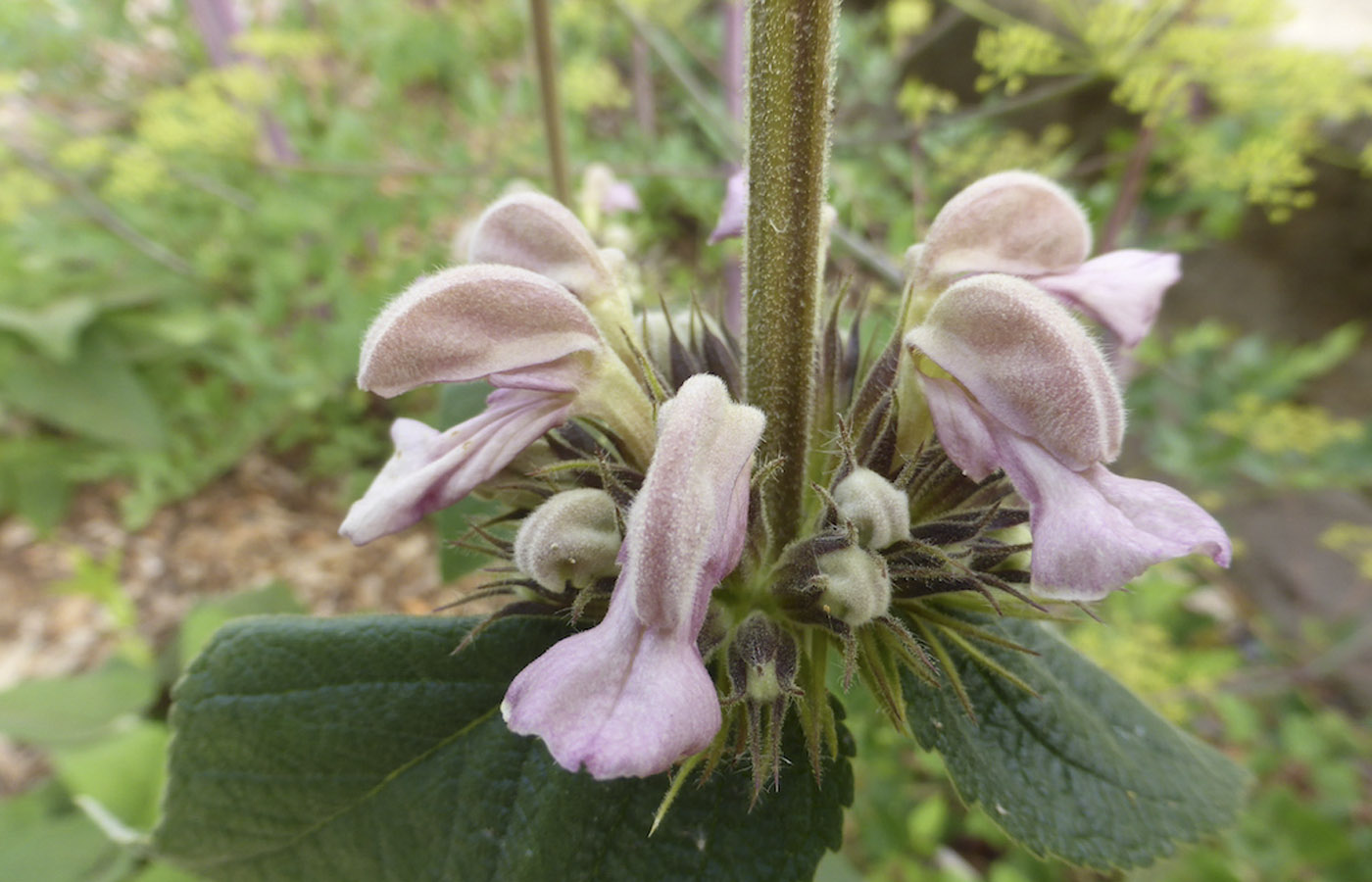 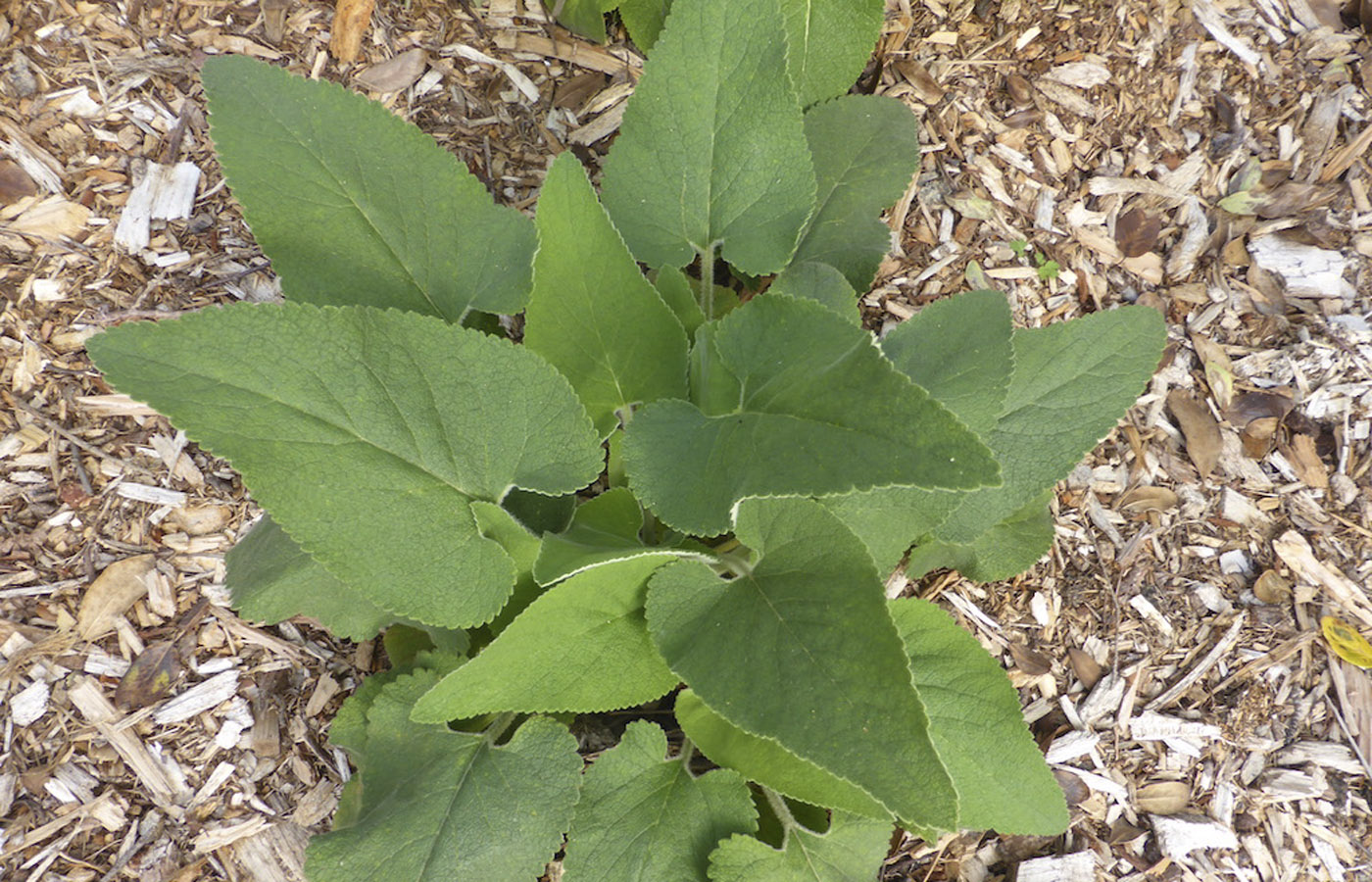 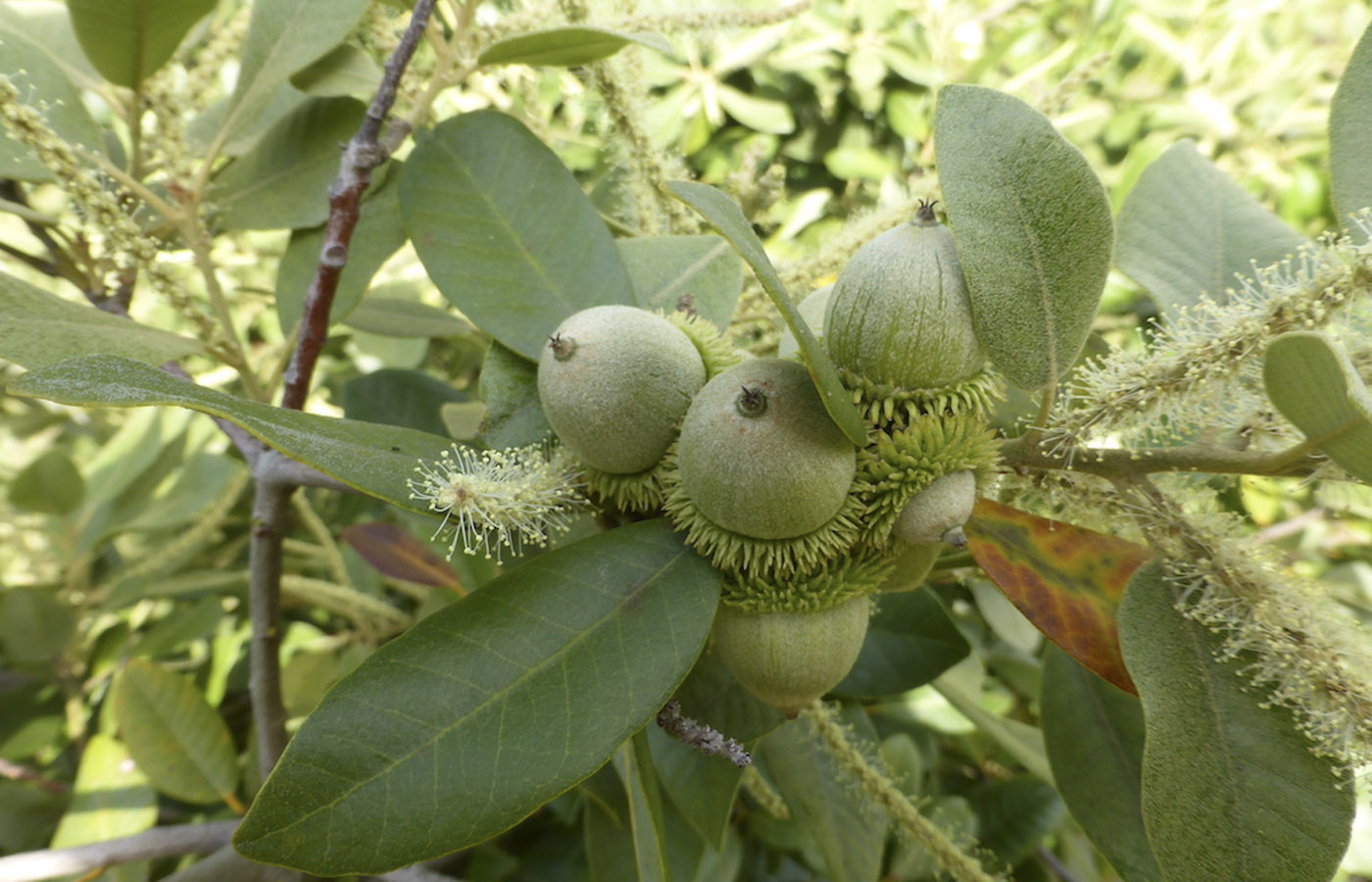 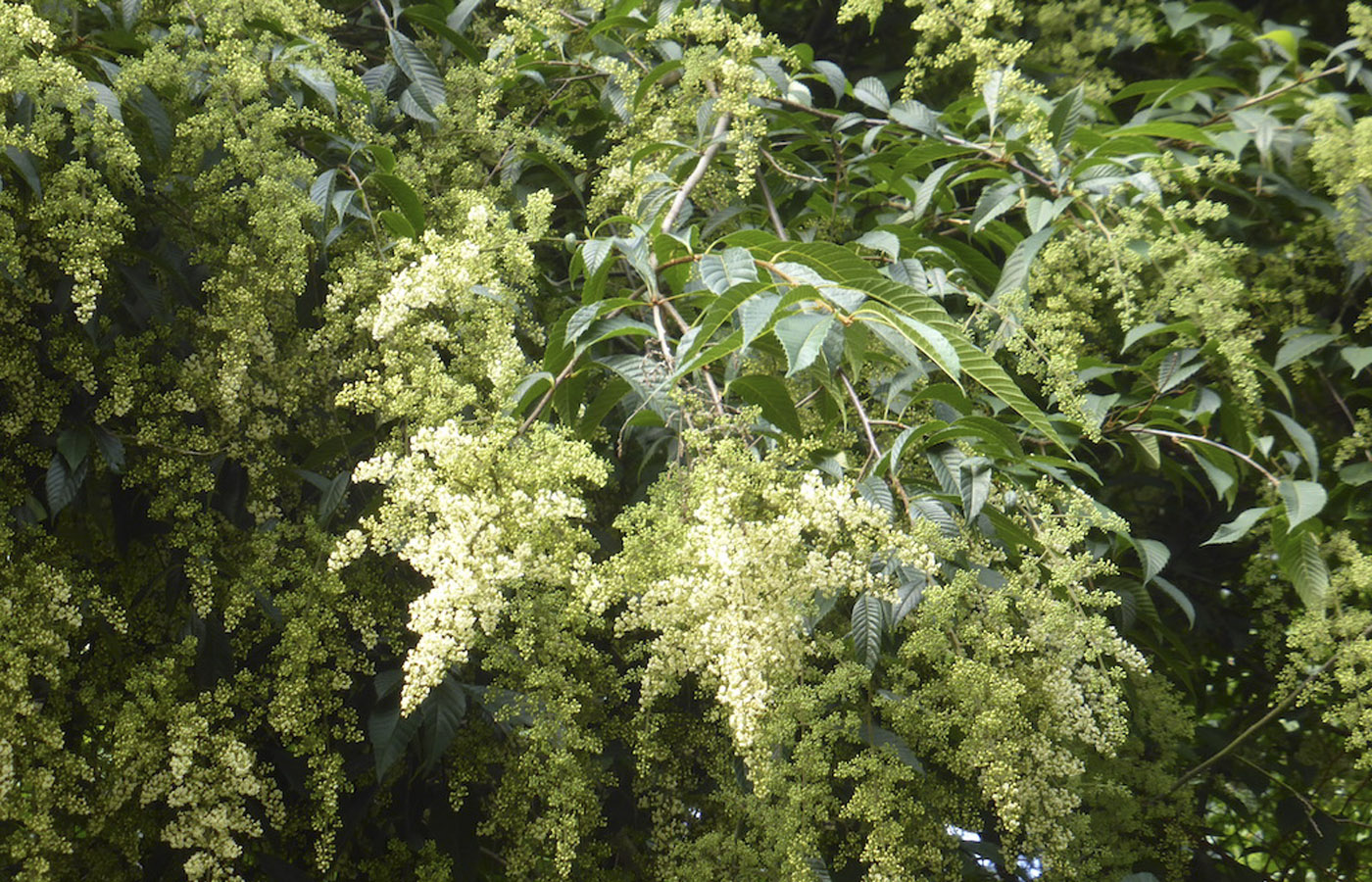 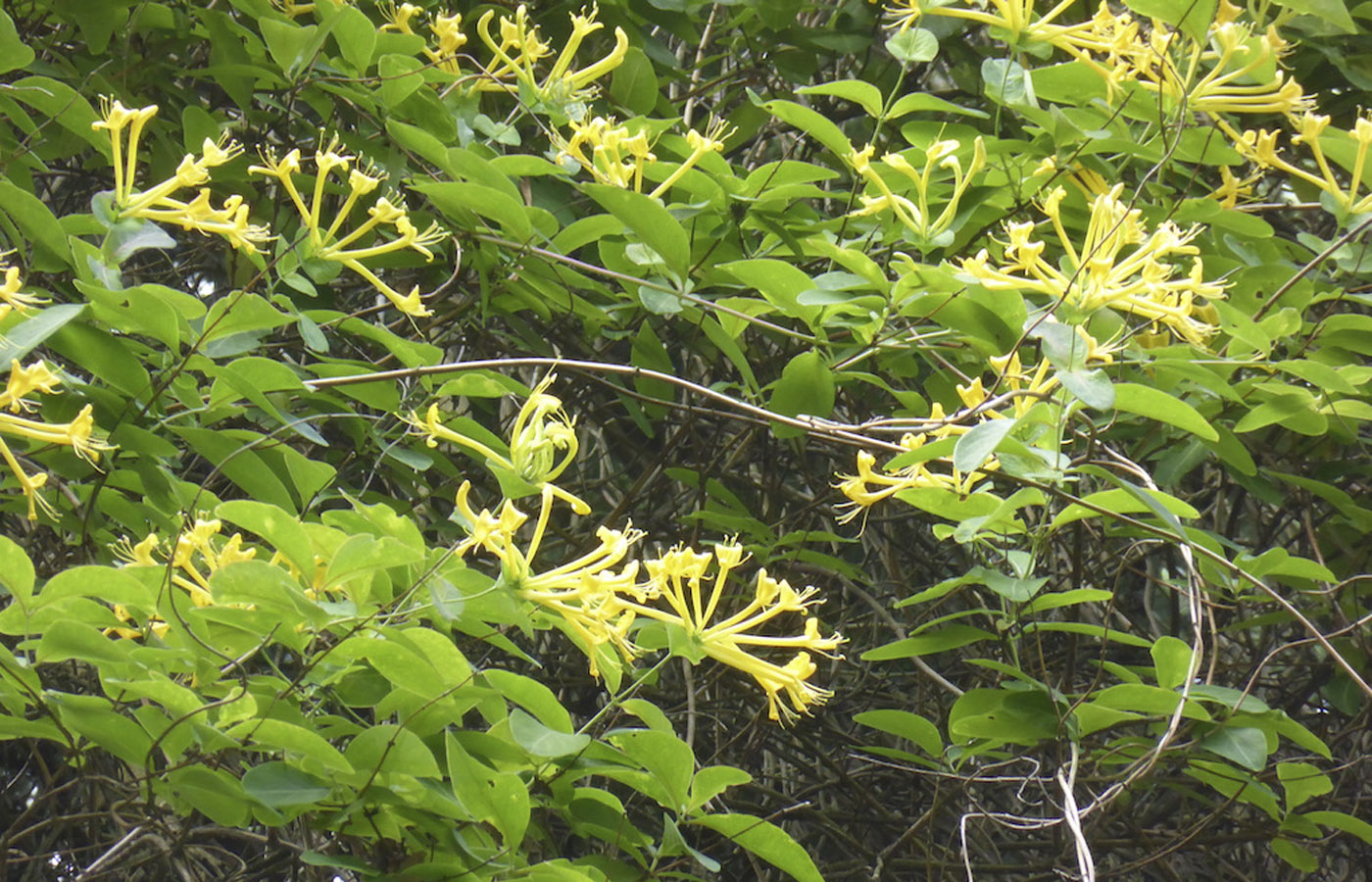 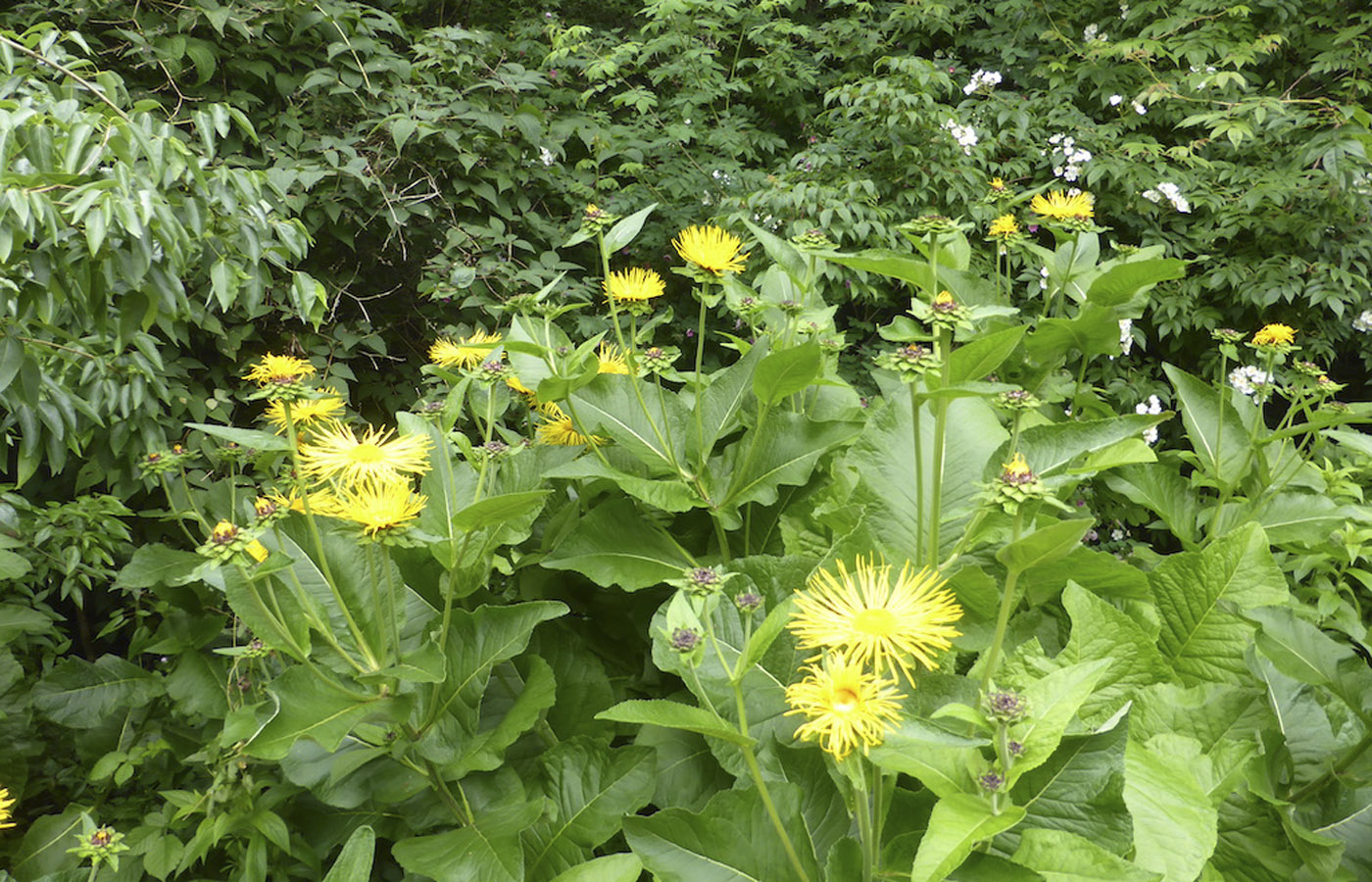 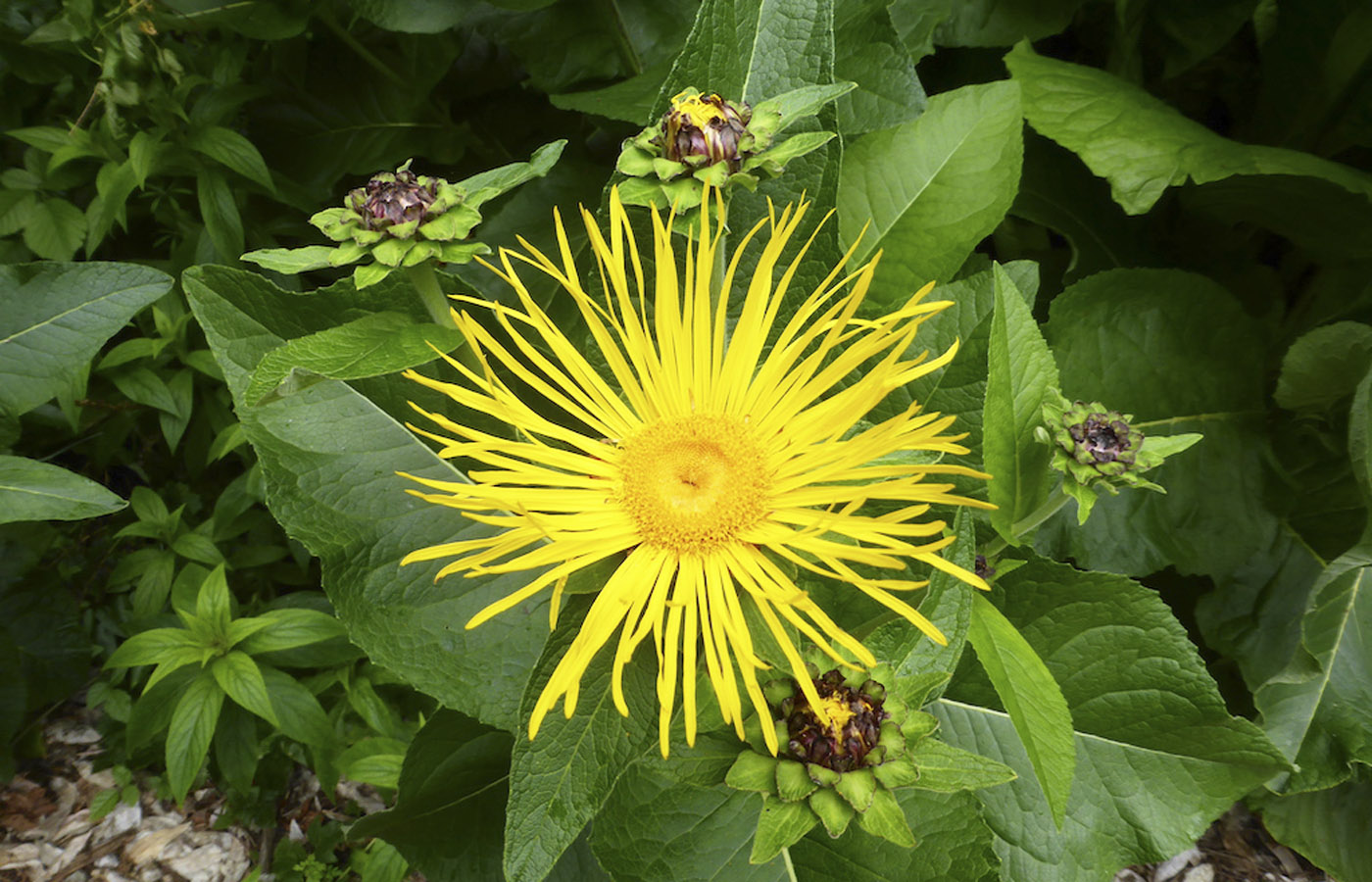 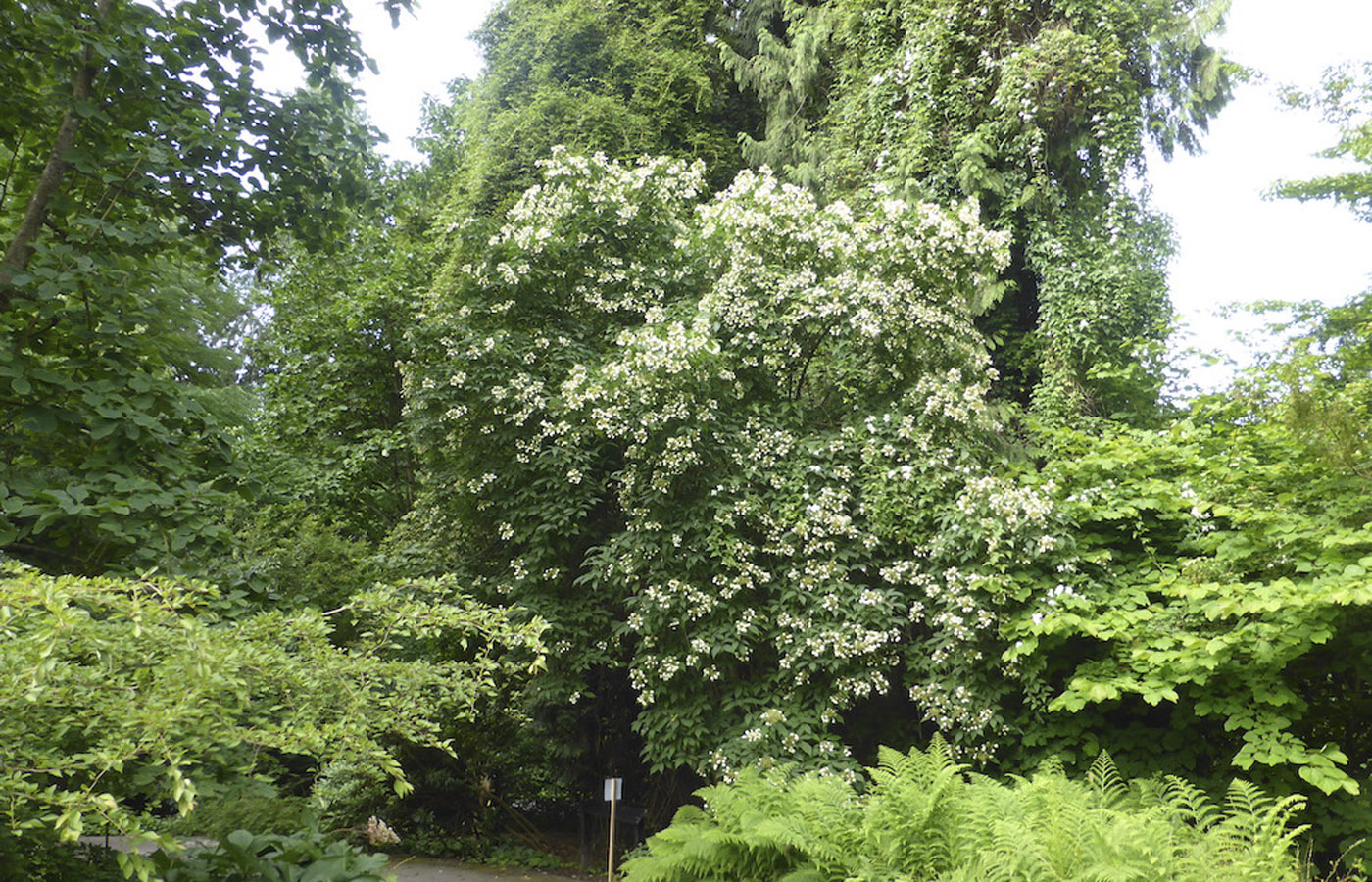 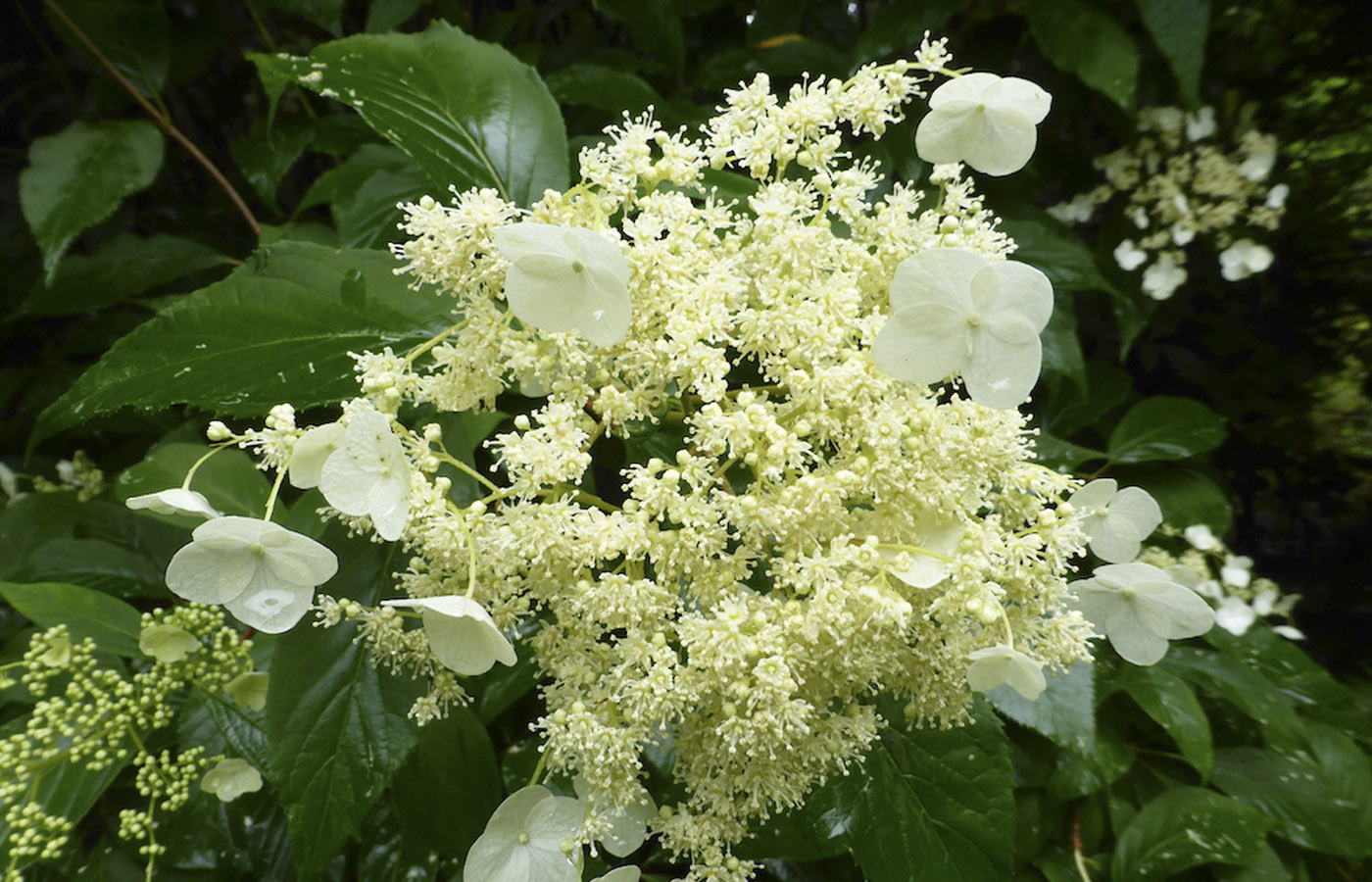 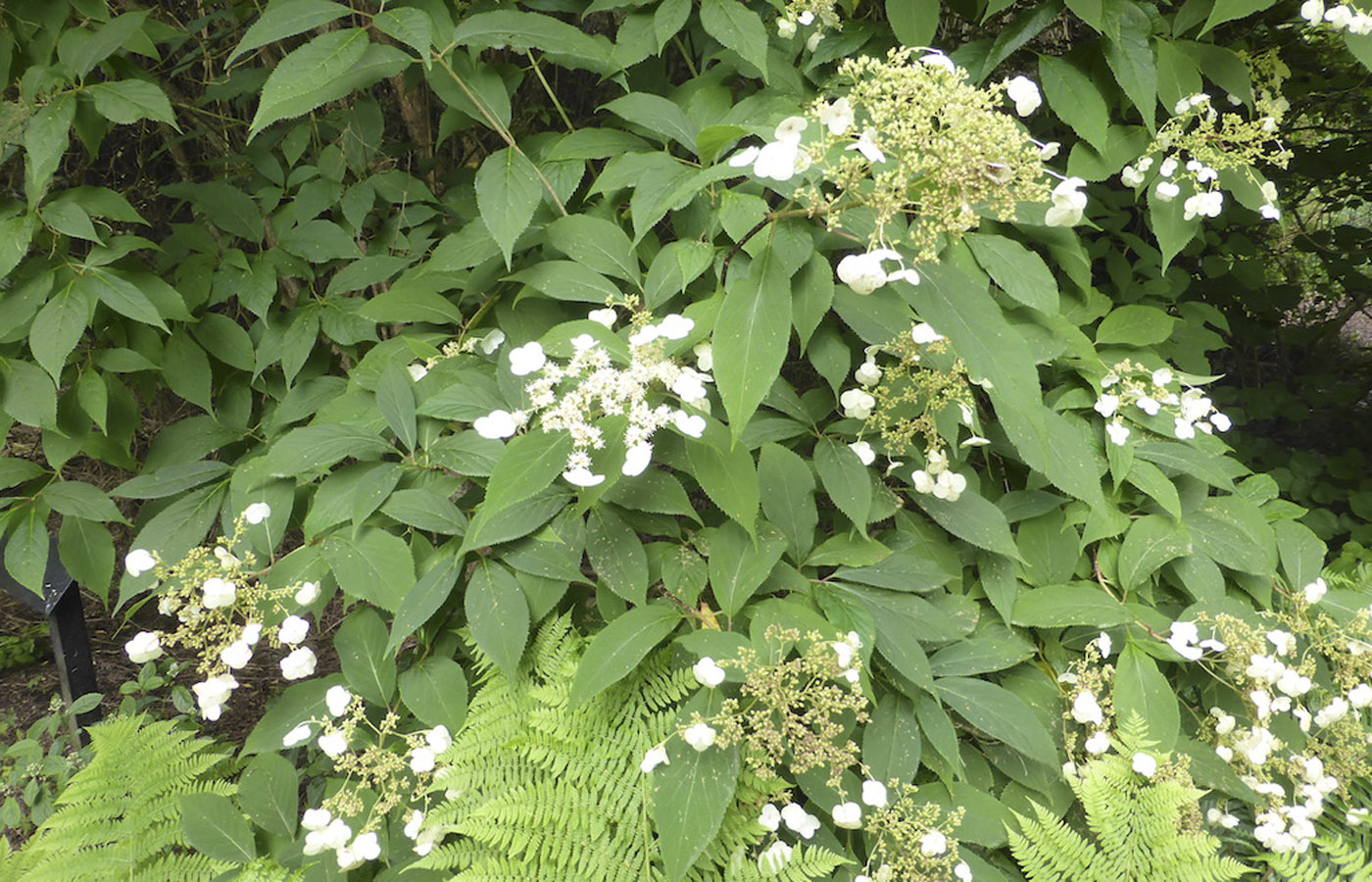 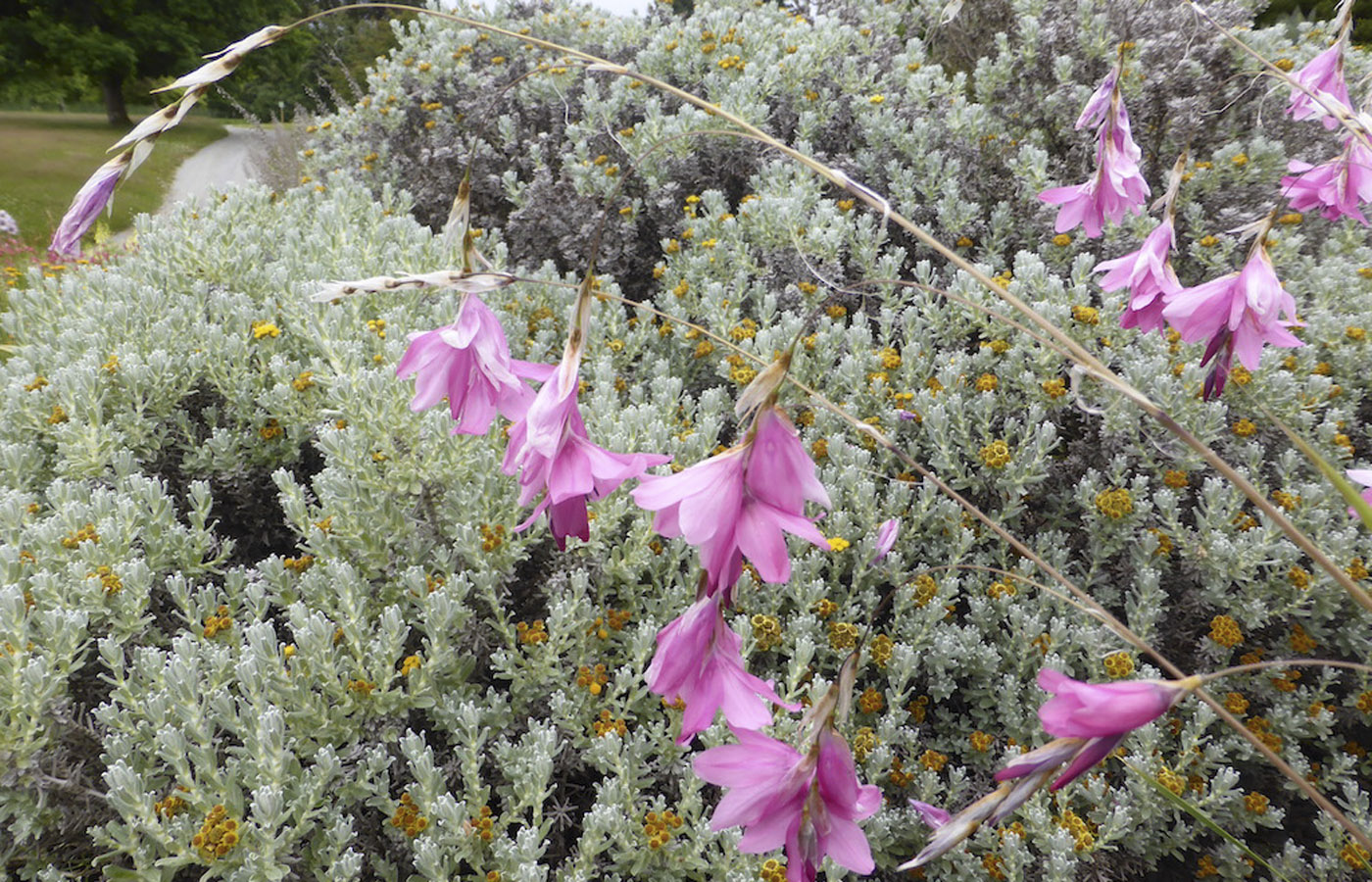 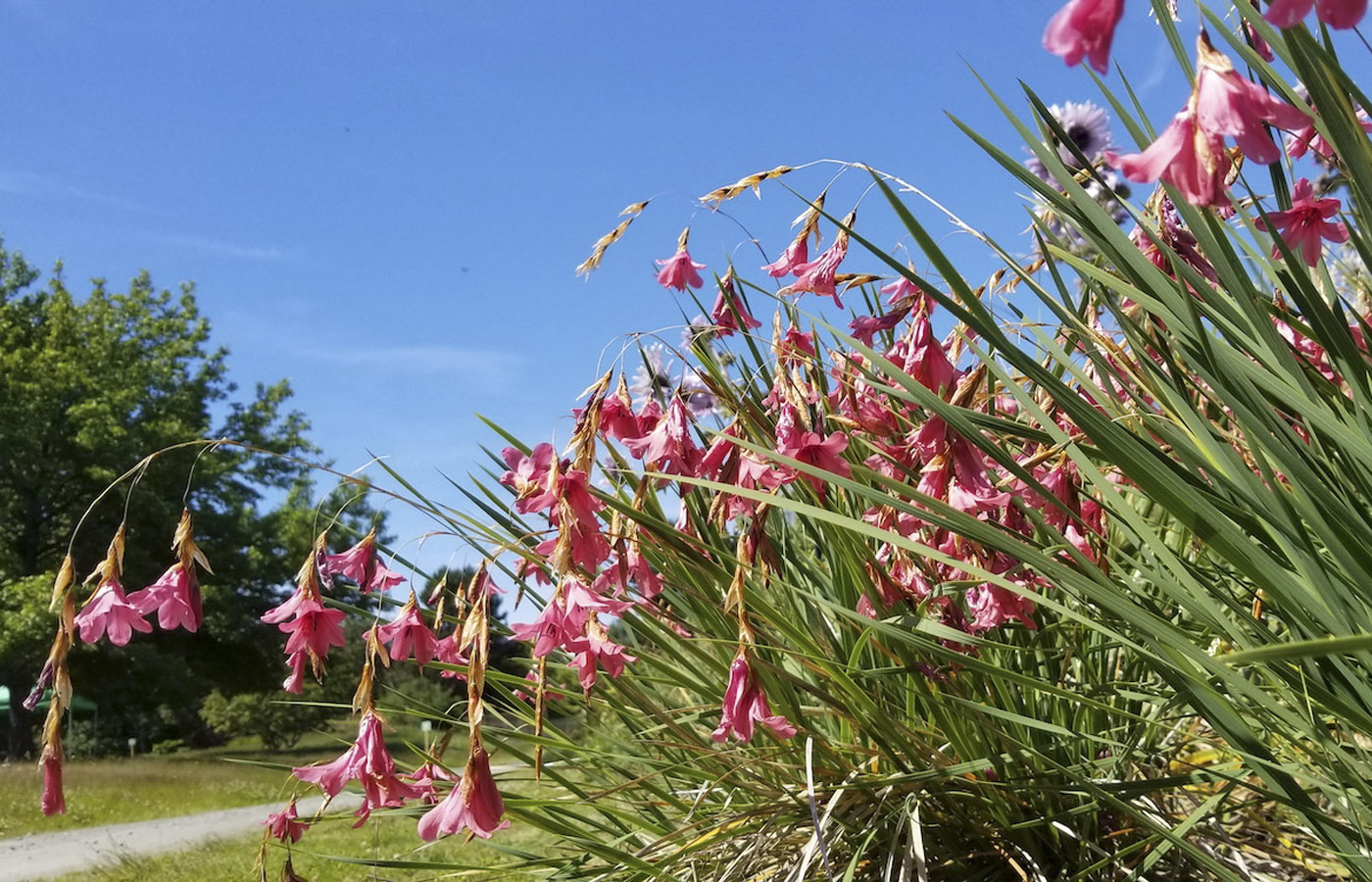 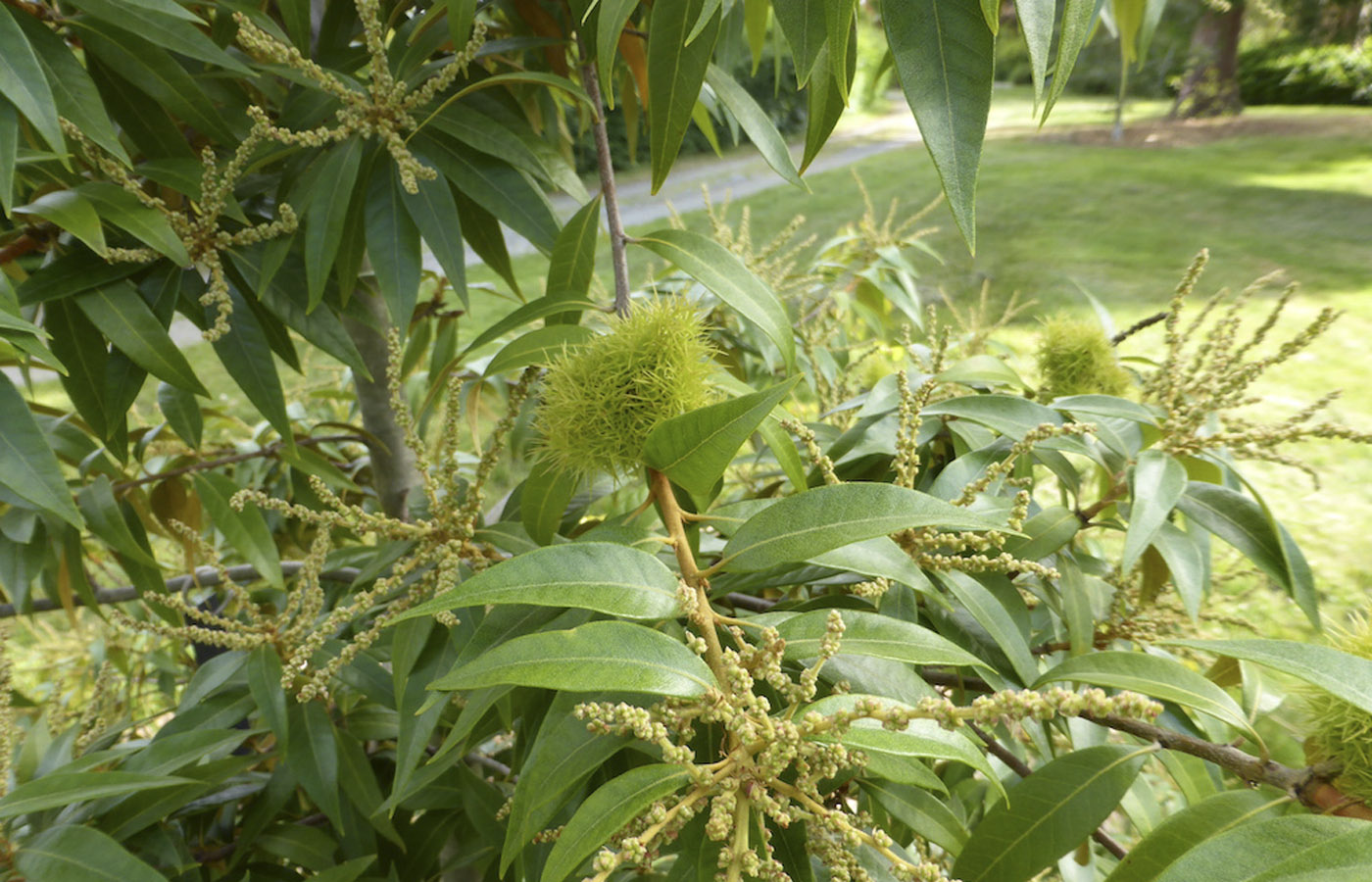 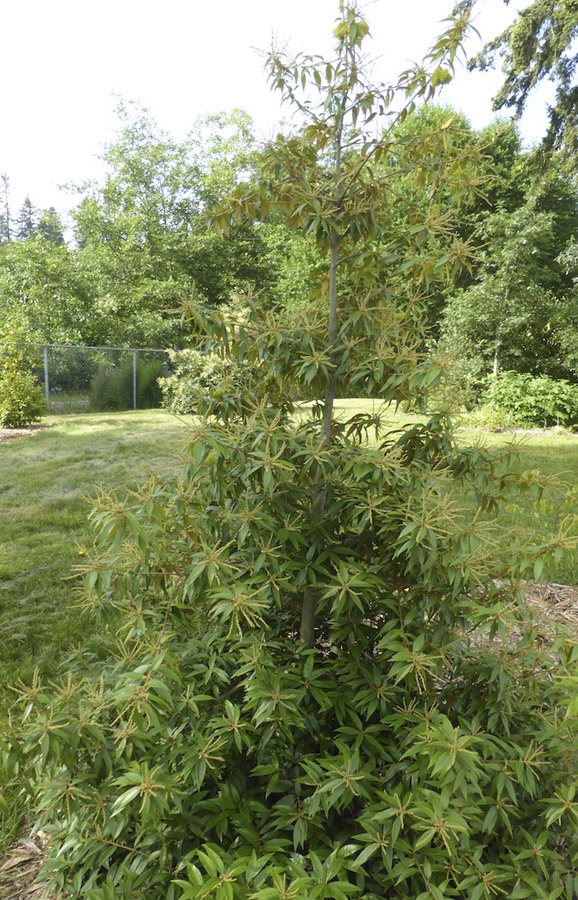 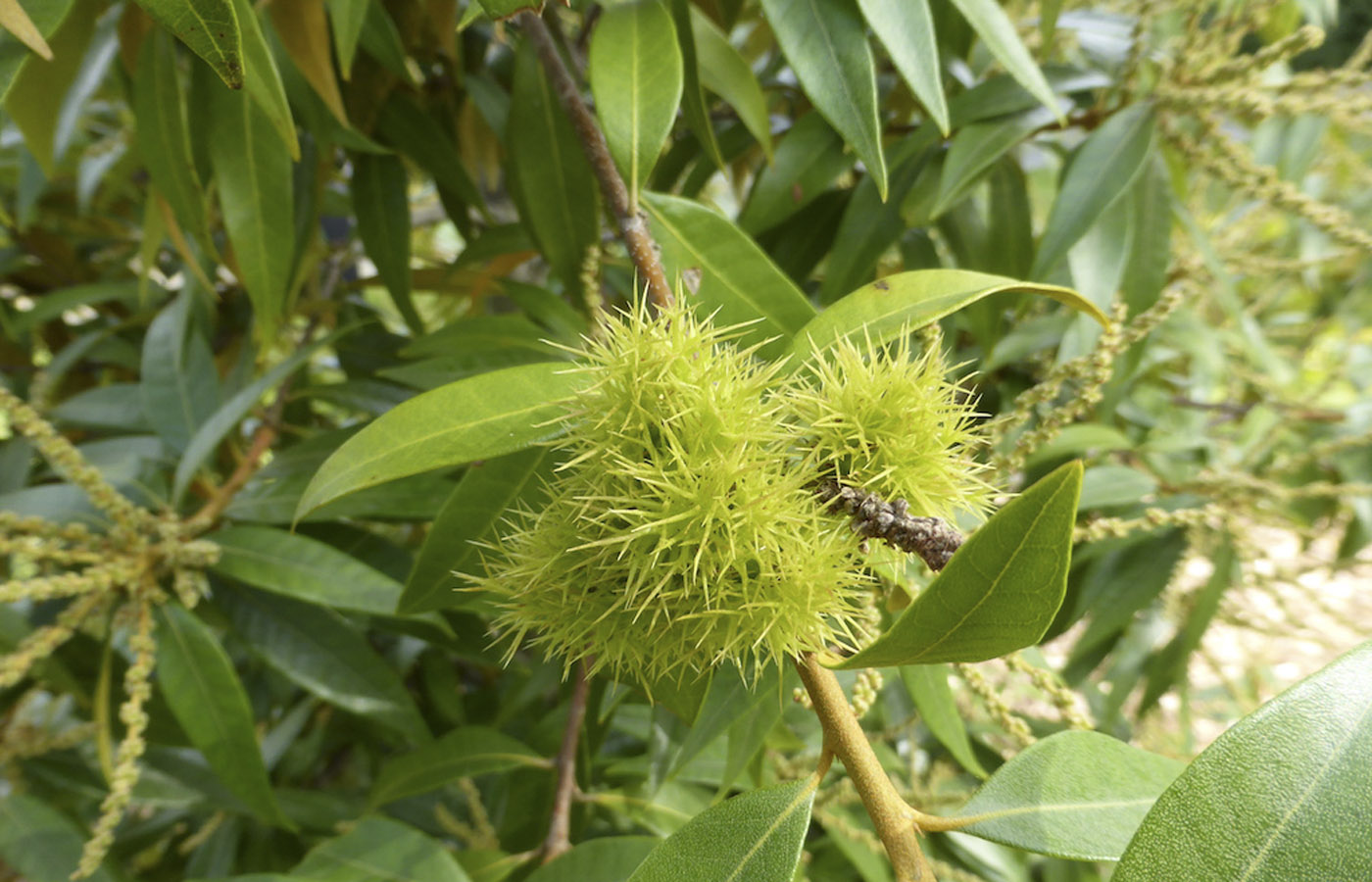