It’s a truism to say the weather is difficult to predict. I’m not talking about the day-to-day kind of weather, but about longer-term prognostications. Who could have predicted the snow and cold temperatures of December 2016, for example? Well, I did, though not in any thoughtful, detailed or scientific way. My predictions are based on local experience of the behaviour of particular trees. The predictions are admittedly only half serious, and I may be off by a year or two, but then I don’t need any expensive climate modeling computers or a fancy meteorological education.

My yardstick is the genus Eucalyptus. Observant gardeners will agree that large eucalyptus trees are a rarity in Vancouver. This is not because people don’t plant them, but because the seedlings seldom have the chance to develop into large trees, despite their rapid growth. In Vancouver, even the hardiest of Eucalyptus species may be seriously damaged, cut to the ground or killed entirely when the temperature drops below minus 8° or 10° C. Every decade or so, give or take, we experience a particularly brutal winter or two, with frigid outflow winds and lots of snow. And this year, a number of Eucalyptus species were approaching the 10m-height “maximum” (this is my arbitrary maximum height, past which eucalyptus almost never reach in Vancouver), hence my prediction that we would have a cold winter. The last time there was significant damage to these by frost was in 2008. 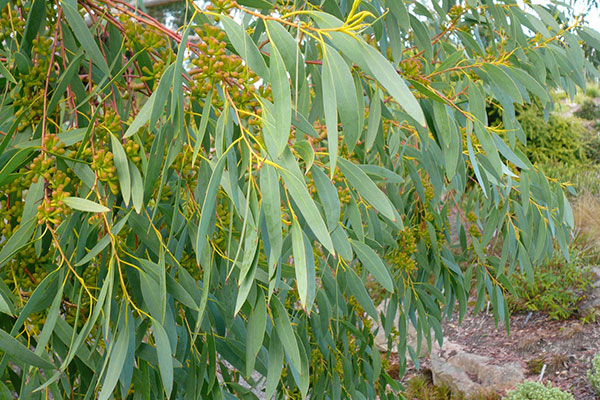 While we typically receive our coldest temperatures in January, most freezing damage occurs for the majority of plants in Vancouver in November or December, when plants are in the process of hardening off before becoming dormant. This is not the case with Eucalyptus, as the species never become truly dormant. Note that Eucalyptus species don’t even form overwintering buds. In cold weather, growth slows or stops, and in really cold weather, tissues may be damaged significantly, but as soon as temperatures rise again, growth resumes either from undamaged shoots or from new shoots arising from undamaged tissues. Eucalypts are so vigorous that the hardier types can grow stems from ground level to 7 or 8 m tall in only a few short years. In the E.H. Lohbrunner Alpine Garden, three species stand out for their cold-hardiness: the common, often single-stemmed Eucalyptus gunnii (cider gum), the multi-stemmed, spreading E. parvula (small leaved gum) and especially the robust E. coccifera (Mt Wellington peppermint). That species died back to the ground in its first winter (1992) but rebounded with five strong stems the following spring. In the winter of 2006-07 the tree, now about 8 m tall, died back well into its largest scaffold branches. It was similarly damaged in 2008-09. In both cases, it quickly regained all of its lost height. Not so, the tall-growing E. gunnii, E. rodwayi (swamp peppermint), and E. perriniana (spinning gum), all of which have repeatedly died back to the ground whenever temperatures dip below about minus 8° C. The December freeze (minus 6° C in the Garden) doesn’t seem to have caused much of any damage, but January’s another thing.