February 2020 in the Garden 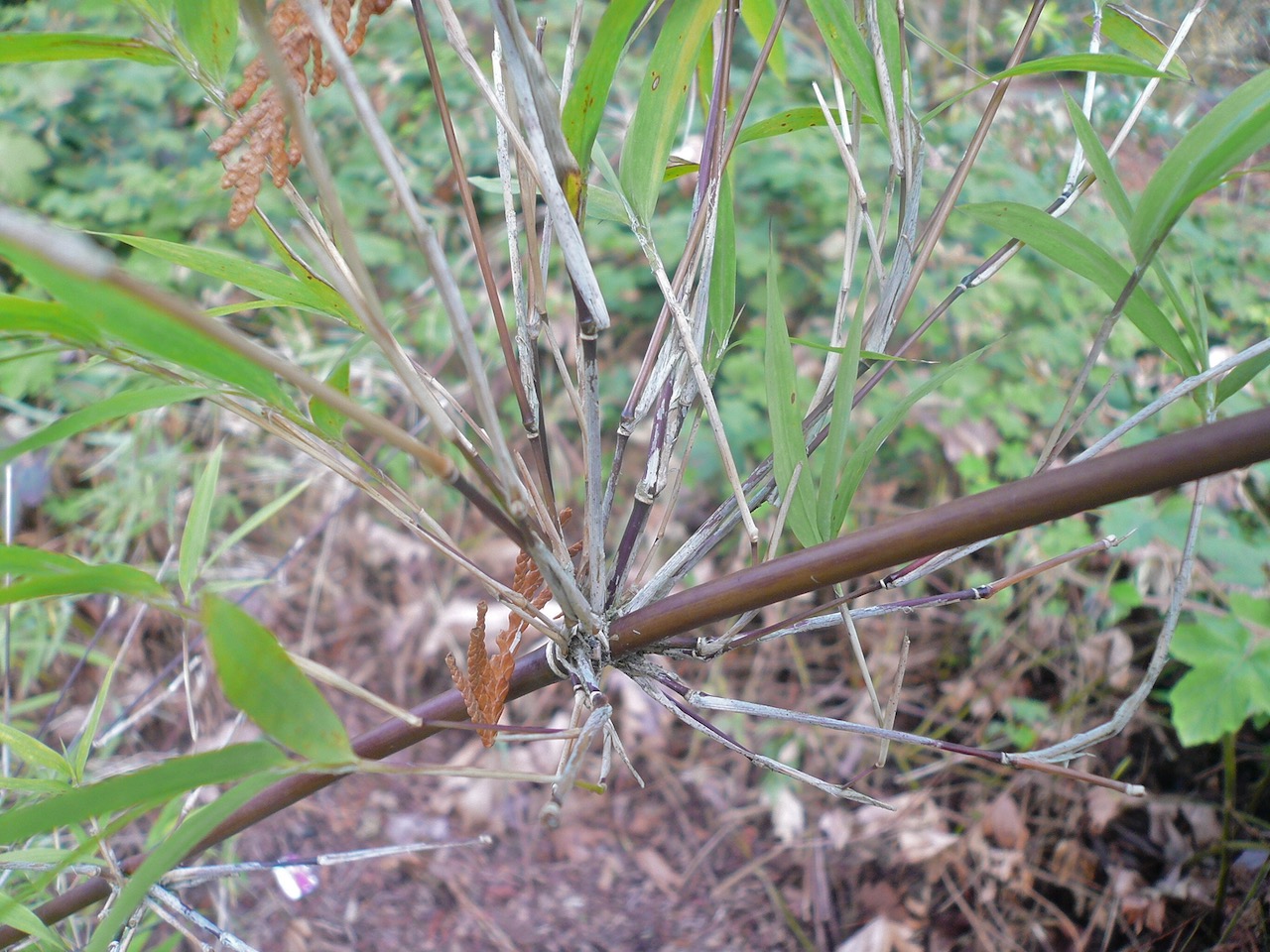 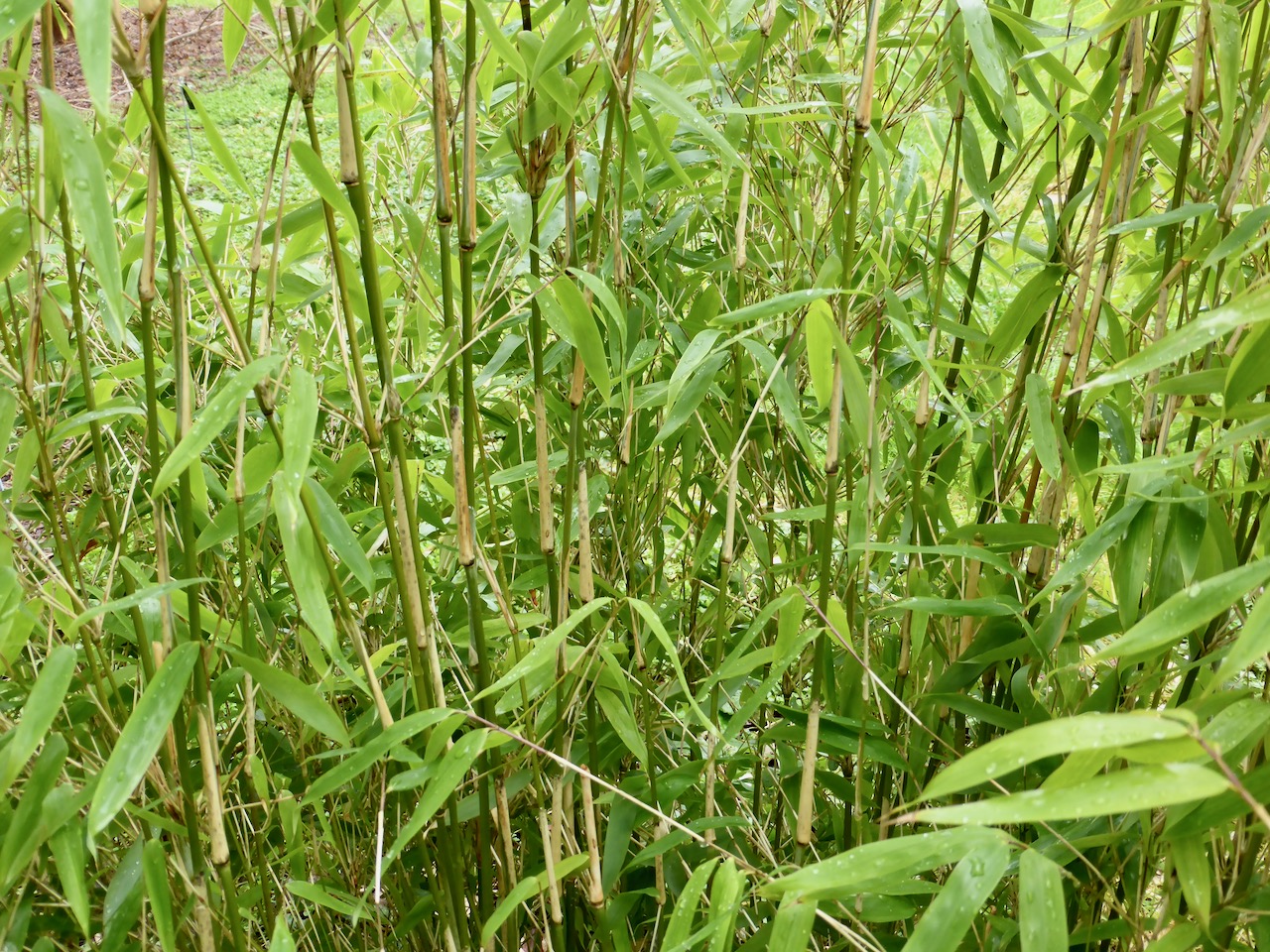 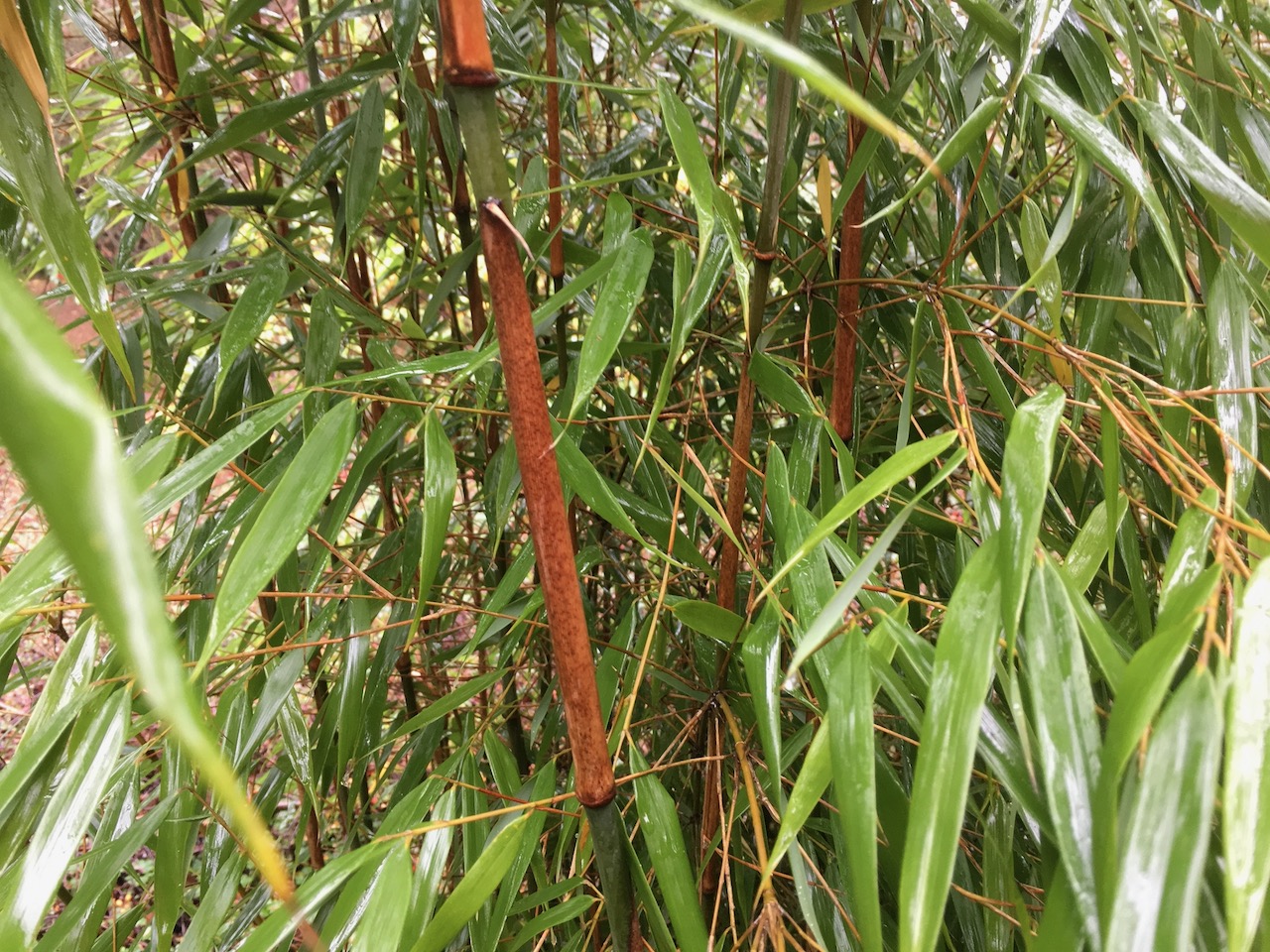 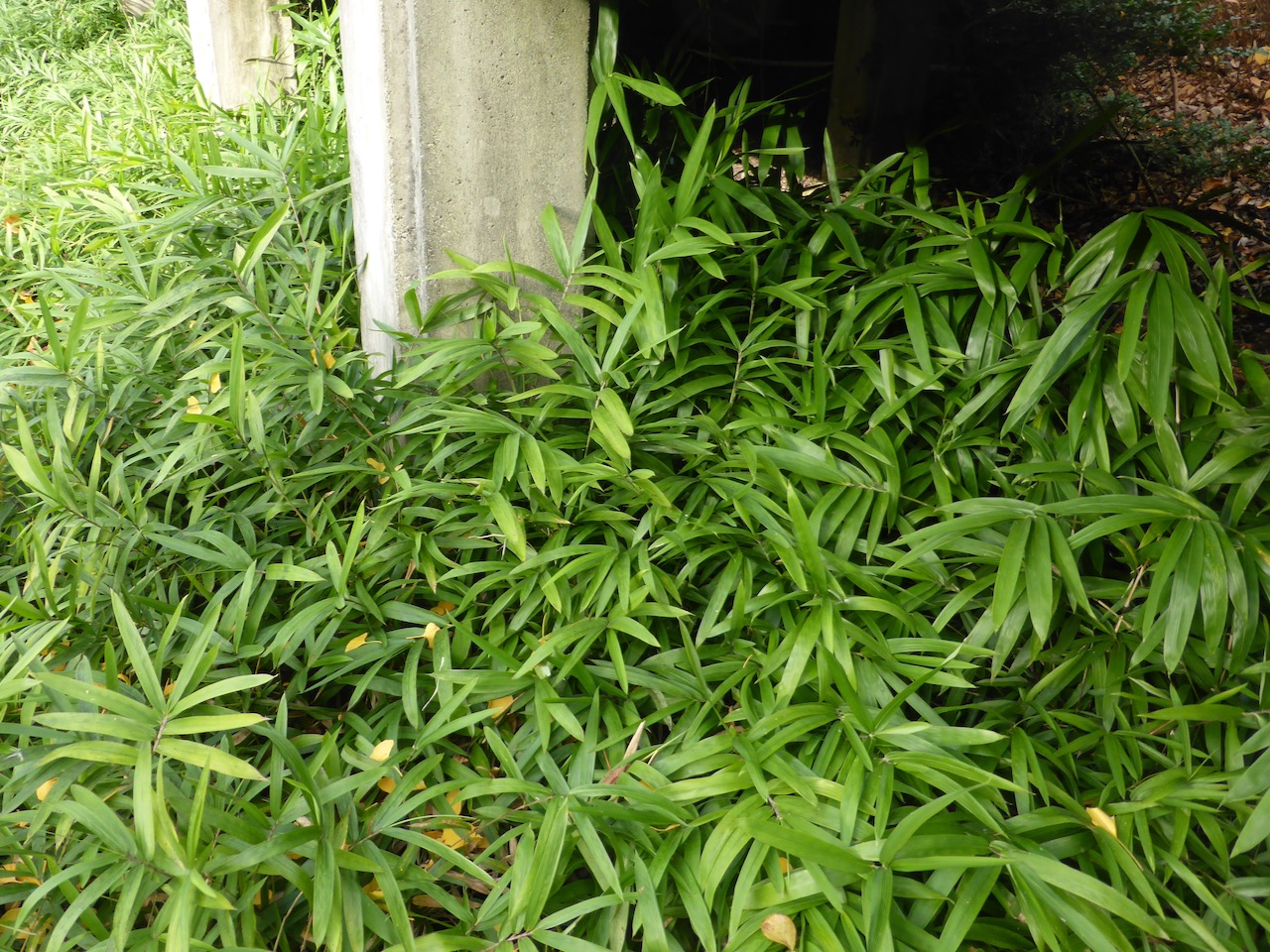 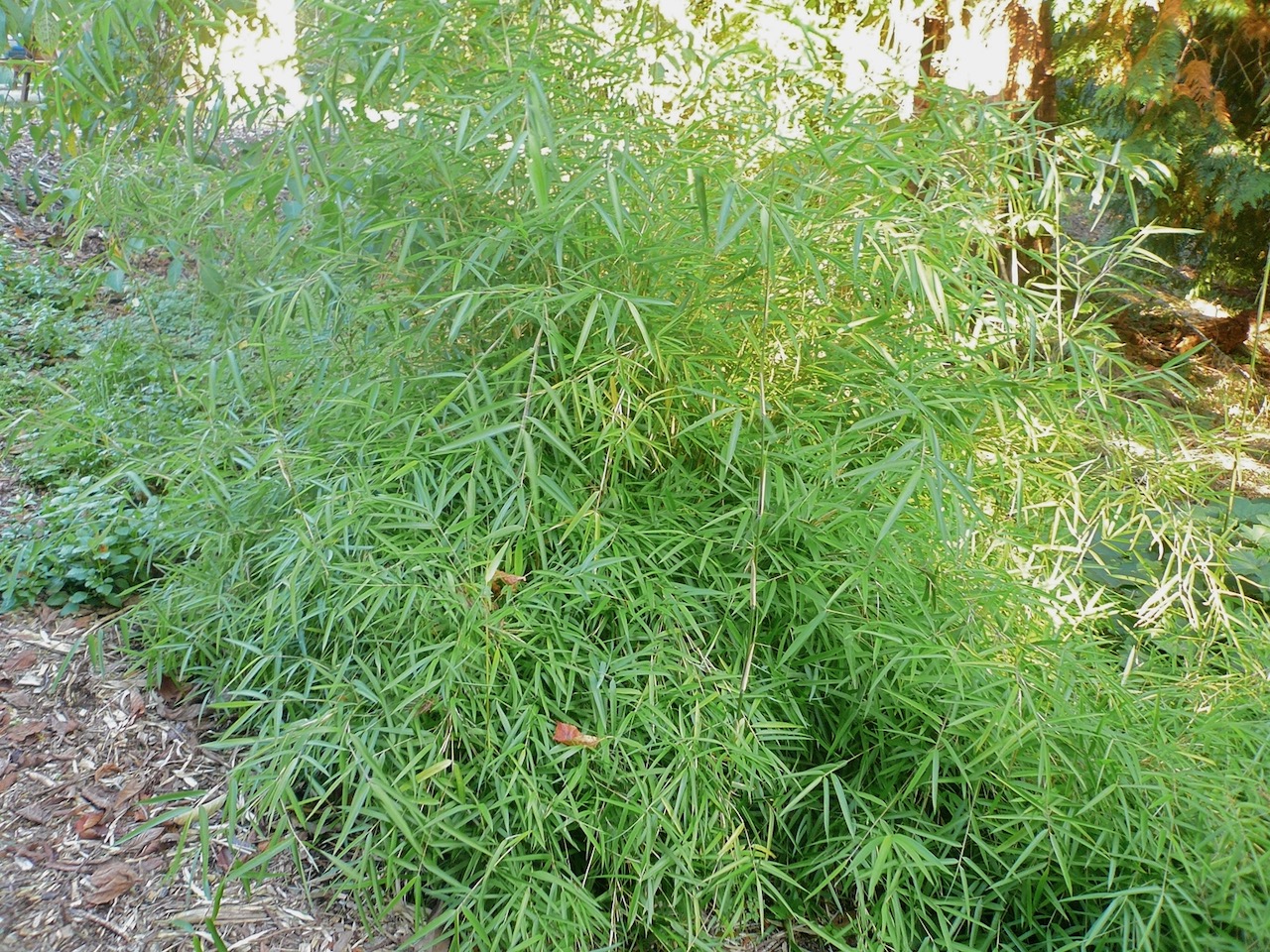 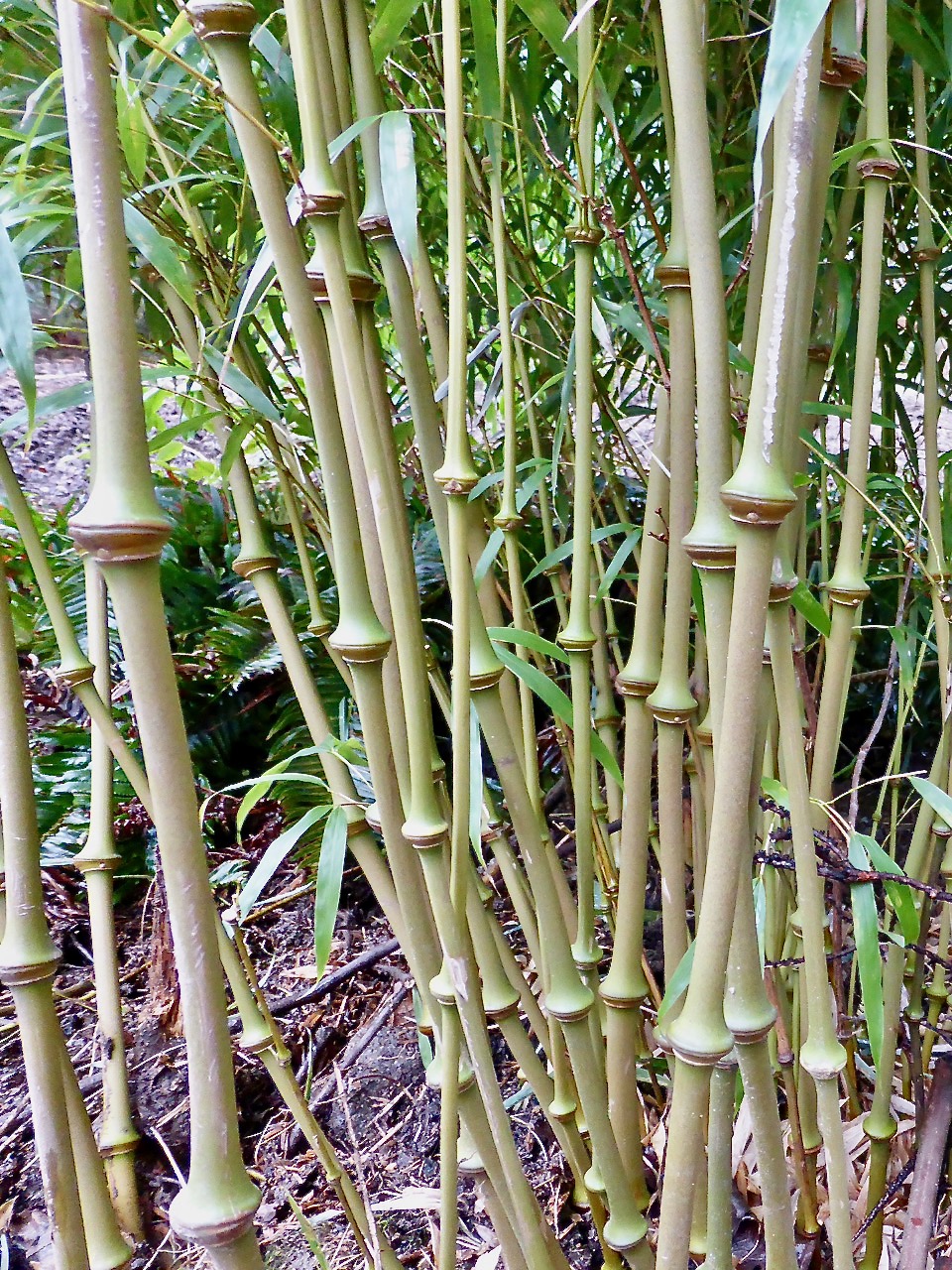 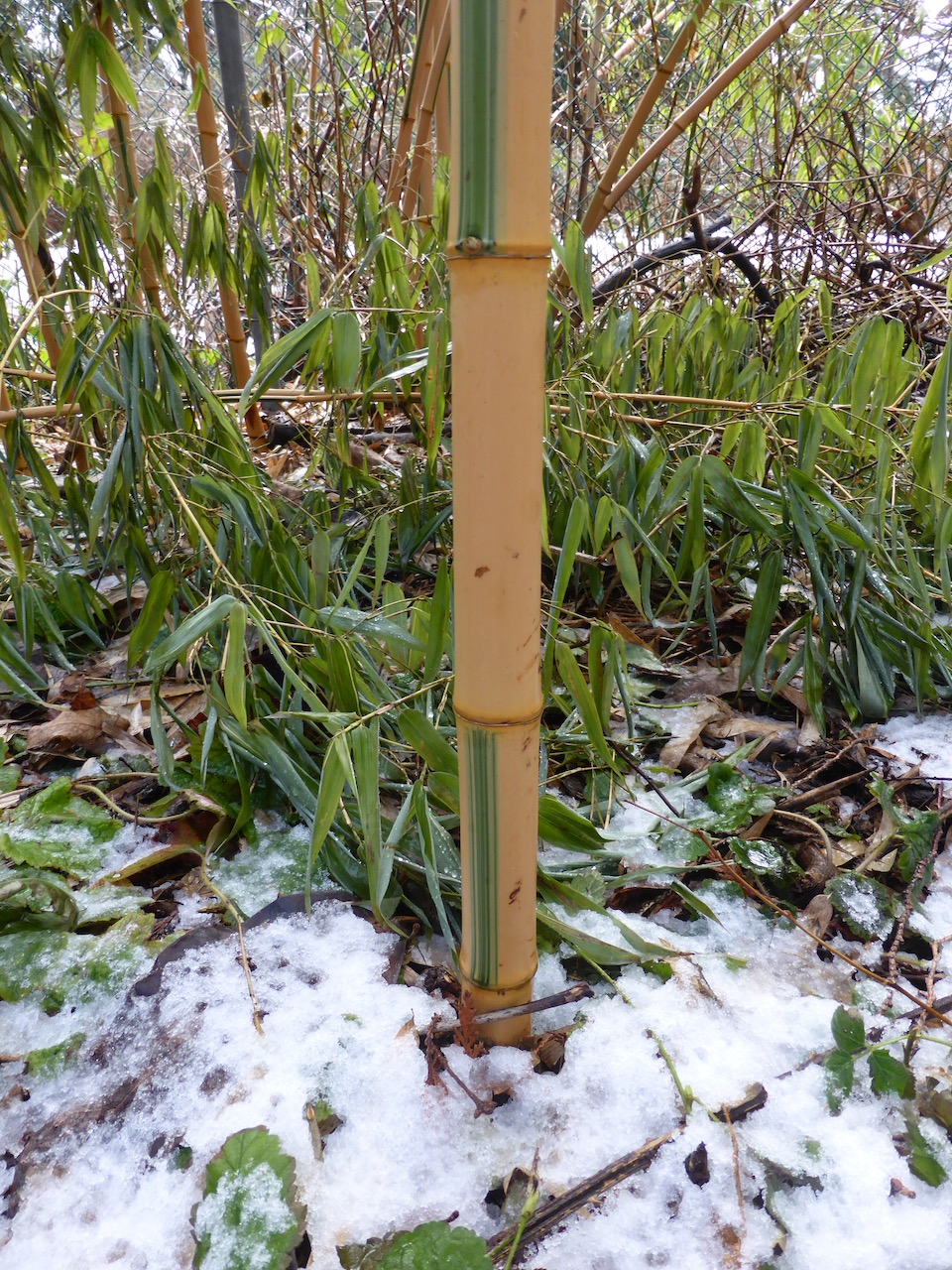 Partly because of the size and scale of the David C. Lam Asian Garden, but also because of the predominance of other mid-level shrubs, the Botanical Garden’s bamboo collection is often overlooked, or at least, hidden by competing foliage. There have always been a few bamboos in the Garden’s collection, but about a decade ago, a large number of mostly Chinese bamboos were donated to the Botanical Garden. These plants are now approaching a size where it is now difficult to ignore them. And because of the lack of deciduous leaf cover in the winter, all of our bamboos stand out with particular lushness in February, making it an excellent time to have a look at them.

When viewing bamboos, it’s good to know a little vocabulary to help understand their biology and to differentiate the various species. Bamboos have culms (above-ground stems) that arise from rhizomes (below-ground stems) that are classified as either “clumping” or “running.” Clumpers produce dense colonies that expand slowly outward, while running rhizomes produce more widely-spaced culms and can quickly and aggressively extend into new territory. The runners are often problematic in residential settings. Culms are usually hollow and interrupted by a series of more or less prominent nodes (a prominent ridge) that encircle the culms. Papery culm sheaths protect the expanding culms, and in some species, the sheaths are persistent, remaining attached for some distance up the culm from the ground. Leafy branches arise from the nodes in the upper part of the culm. Flowering in bamboos occurs more or less synchronously within a species and only after a long (often decades-long) interval of vegetative growth. In nature this phenomenon is usually known as mass flowering, but cultivated plants of the same species, even separated by oceans and thousands of kilometres, will typically follow the same pattern and flower more or less synchronously. Once bamboos produce flowers, they decline and almost always die.

One of the first bamboos that visitors encounter at the Botanical Garden is Chusquea montana (Andean bamboo), which is planted in one of the beds in the Entrance Plaza. Chusquea montana is native to the mountains of south-central South America in Chile and adjacent Argentina where it grows as an understory species in cool, damp Nothofagus (southern beech) forests. The pea-green culms can be erect or leaning, and the bright, parchment-white culm sheaths persist for some time on the lower parts of the culm. The species is normally recognized by the dense, ruff-like complement of bushy branches that surrounds its swollen nodes.

Looking over the railing at the Garden’s entrance, visitors cannot help but see the mass of deep green Pseudosasa humilis (dwarf bamboo) on the slope adjacent to the entrance pond. This Japanese bamboo, which is traditionally included in the genus Pleioblastus (or Arundinaria), can grow to 2 meters or more, but usually forms colonies of leafy green wire-like culms 60 to 75 cm tall. The epithet humilis means “low growing,” but this species is hardly a dwarf. It is also arguably among the most aggressively spreading of all bamboos grown in the Vancouver area, and a planting of this species absolutely requires containment. Like other smaller bamboos, P. humilis tends to look unkempt unless completely renovated (cut to the ground) every year or so, and this is what we do to maintain the colony in its more or less pristine condition.

A good number of bamboos are visible from the main trails as you venture further into the Asian Garden, but one of the most distinctive is Chimonobambusa tumidissinoda (walking stick bamboo), which is located in the middle of the Wharton Glade. The classic walking stick bamboo is a running bamboo with both tightly-clustered culms and wandering rhizomes that spread widely. The colony is surrounded by mown turf, so that we can check its wandering habits. The culms are deep olive-green, solid at the base and hollow above, growing 4 or 5 m tall. The nodes are enlarged and each forms a broad ridge that tapers above and below (tumidus= swollen + issima= very + nodus = node). Two or three branches are produced per node and these subdivide to produce a lush veil of finer horizontal branches that droop handsomely at their tips. The culms have been harvested for walking sticks and umbrella handles for centuries, and the new shoots are edible.

A few meters to the west, on Kingdon Ward Way between Delavay Trail and Lower Asian Way, is a fine specimen of Fargesia scabrida (orange stem bamboo). Fargesia species are all clumping bamboos native to mainland Southeast Asia and the Himalayas. Like the similar Fargesia robusta, which can be found by the entrance sign on Southwest Marine Drive and on the west side of the Garden Pavilion, orange-stem bamboo is native to the mountains of Sichuan Province where it is reported to be an important food for the giant panda. The relatively stiff, upright culms grow 2 to 4 m tall with dark green, drooping, semi-lustrous leaves. Emerging culms have orange-brown culm sheaths covered in scabrid (bristly) hairs, and smaller orangey-brown sheaths that cover the small stems toward the branch tips, while the culm and branch sheaths on F. robusta are smooth and papery white. In both cases, the culm sheaths persist for a few years. The genus name of these valuable bamboos commemorates Père Paul Guillaume Farges (1844-1912), a French missionary and naturalist who collected plants extensively in northeast Sichuan.

One of the most exuberant of all of our bamboos is Borinda fungosa (chocolate borinda). Borinda are handsome, clumping bamboos native to the mountains of southwestern China, Indochina and the Himalayas. They are similar to the fargesias, but often more luxuriant with droopier culms. The genus is named for the Irish forester and grass taxonomist Norman Loftus Bor (1893-1972) who worked for the Botanical Survey of India, and at Royal Botanic Gardens, Kew. Chocolate borinda is native to the mountains of western China where it forms fountain-like clumps with slender, arching, green-brown to chocolate-brown culms and lush, pendulous foliage.  The culms emerge in midsummer or later and are pithy when young (fungosa means spongy—i.e., like a mushroom). The culms can grow 4 to 6 m tall, the largest ones measuring up to 2.5 cm in diameter. Our only specimen is located behind the Campbell Building on Beer Trail just north of Campbell Trail.

There are three other bamboos in close proximity: To the west, against the chain-link fence is Phyllostachys bambusoides ‘McClure’s Castillonis’. Species in the genus Phyllostachys (groove stem bamboo) are all running bamboos that can be recognized by the shallow longitudinal groove between the nodes on the culm. Although Phyllostachys are usually identified as aggressive runners, ‘McClure’s Castillonis’ is relatively benign. This popular cultivar has solid green leaves and golden yellow culms that are interrupted by narrow, longitudinal green bars.‘McClure’s Castillonis’ began flowering heavily last year and is now reportedly flowering around the world. From the trail, you should be able to see the nearly leafless, seed-laden branches.

Yushania anceps (Jaunsar bamboo) is an impressively aggressive bamboo native to the western Himalayas. Our plant, which is located a little further up Beer Trail, is the English cultivar ‘Pitt White’, which was named for the Edwardian family, the Pitt Whites, and their house in Devon in southern England. Pitt White House and Garden is now dedicated to the manufacture of bamboo straws and other “eco-friendly and sustainable” bamboo products. The flowering cycle for Y. ancepsis about 55 years, the last mass-flowering recorded in 1966, and the next one thus anticipated in 2020. This can’t come soon enough (take a look and you’ll see why). The common name refers to the Jaunsar region of India, where it was first collected by Westerners.

Around the corner along the western edge of Campbell Glade to the west is a small specimen of Fargesia murielae (umbrella bamboo). This is a particularly lush, clumping species, and probably one of the most attractive small bamboos for residential landscaping. Fargesia murielae was first collected by Ernest Henry Wilson, who mounted expeditions to China for both the Arnold Arboretum and Veitch & Sons Nursery at the turn of and in the early part of the 20th century. It was named for his daughter, Muriel.

A list of the Garden’s bamboo species and cultivars, as well as information on the collection as a whole and its history can be found on the Garden’s website, here.