February 2019 in the Garden 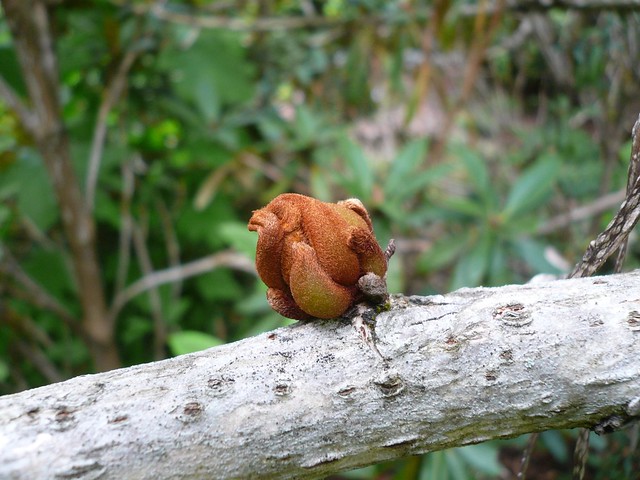 The weather in February is often hard to predict more than a few days out. The Botanical Garden, like the surrounding region, can find itself engulfed in relatively mild air when the prevailing winds are heading straight off the ocean. This usually means rain and the conditions for early flowering. Equally, high pressure and sunshine mean winds are from the east, and this means the garden is flooded with more frigid air. Under these conditions, flowering is often delayed. 2019 being an El Niño year, we are more likely to enjoy the former regime (i.e., rain and cool, but not cold weather), but it’s worth remembering that nearly anything is possible in February. Thus, as floral forecasts for the month can be unreliable, it’s probably better to avoid the subject of flowers entirely and focus on a fascinating, but ultimately more dependable winter plant feature: that is, overwintering buds.

The overwintering buds of many plants can be conspicuous, especially as they start to swell in late winter, and deciduous plants, in particular, show an amazing diversity. In general, a bud is a dormant structure on a branch that encloses pre-formed, partially expanded leaf or flower tissues. When dormancy is “broken” in spring, the buds open due to the pressure of the expanding tissues within. How those tissues are packed in the bud is an intriguing subject in itself—consider the crumpled, crepe-paper-like unfurling petals of the oriental poppy, or the smooth, spirally overlapped ones of hibiscus. But that’s a subject for a spring commentary.

In terms of the outwardly visible structures, overwintering buds generally have a covering of bud scales. Not all plants produce bud scales, and indeed, there are even some plants that have no discernible buds at all—Eucalyptus is an example. Viburnums have flower buds with numerous bud scales, but a number of species have overwintering vegetative (leaf) buds that are “naked.” These buds have no bud scales but consist simply of a pair of leathery, partly expanded leaves. The evergreen Viburnum rhytidophyllum is a good example of a viburnum with big, naked buds. There are several throughout the David C. Lam Asian Garden, most notably along Lower Asian Way below Wilson Glade and below Wharton Glade. Meliosma is not particularly common in gardens, but we have several attractive species. The buds of meliosmas are entirely without scales; however, unlike viburnum, the buds are composed of numerous, partly-expanded, twisted leaves that form a seemingly disorganized mass at the branch tip. One of the common names for Meliosma is “worm-head tree.” There is a good example of Meliosma pinnata var. oldhamii in the Entrance Plaza.

Bud scales may be numerous or few in number and also arranged in a variety of ways. They can be hairy or smooth, sticky, waxy or scaly, and variously coloured. For example, scales are spirally arranged and partly overlapping in the oak family, and in sets of opposite, partly overlapping pairs in maples and buckeyes. Note that there are a half dozen oaks, three Aesculus (buckeyes) and four species of Acer (maple) in the Carolinian Forest Garden. In the snake-bark group of maples, the buds consist of two pairs of scales and the bud itself is elevated on a little stalk. This is conspicuous in Acer pensylvanicum (moosewood), as the bud scales are brilliant scarlet and the buds prominent. Moosewood is common in the Carolinian Forest Garden and easily recognized by its beautiful striped bark. The fork-branch group of maples produces overwintering buds are usually paired at the branch tips. In our native Acer circinatum (vine maple) and the closely related A. japonicum (downy Japanese maple), the ovoid, pointed buds are sunken into the stem tip and surrounded by hairs. These are often described as “two eggs in a basket.” There are several A. japonicum cultivars in the Asian Garden. Vine maple is common in the BC Rainforest Garden and at the top of the Garry Oak Meadow and Woodland Garden.

In Cornus, the flower buds are like miniature, grey-brown, Hershey’s kisses. The best of these can be found on C. florida (eastern dogwood) and C. kousa (Chinese dogwood). There are numerous specimens of the Chinese species in the Asian Garden and a particularly fine one southwest of the Garden Pavilion, and a few eastern dogwoods in the Carolinian Forest Garden. In magnolias, the scales overlap concentrically. Each scale nearly completely encloses the one beneath, like a Russian nesting doll. A similar, broad, wrap-around scale is found in willow buds, but in the species of that genus, there is only a single scale. The large bud scales of a number of deciduous magnolias are sometimes referred to as mouse blankets because they are grey and densely silky-hairy. Several of these mouse-blanket magnolias are visible toward the end of the boardwalk near the Ting. In Liriodendron (tulip poplar) which is the closest living relative of Magnolia, the buds are rounded at the tip and flattened like a duck’s bill. The bud scales themselves are technically stipules (small leaf-like appendages, usually paired and arising at the base of the leaf stems in some plants). These stipular bud scales enclose a miniature pre-formed leaf that is folded lengthwise and bent downward on a tiny, curved stalk that encircles a smaller stipular bud that encloses another leaf encircling a still smaller bud (and so on). But I’m getting ahead of myself seasonally again… These extraordinary buds are characteristic of both the Chinese and American species (L. chinense and L. tulipifera, respectively). While there are a good many liriodendrons around the garden, most are tall trees with branch tips well out of reach. Still, a few specimens in the Carolinian Forest Garden have buds at eye-level.

As spring progresses, overwintering buds will continue to expand, their prominence increasing until they finally expose the leaf or flower tissue within. At bud break, the bud scales themselves fall away or persist on the stems. Again, descriptions of the different ways that this happens are distinctive, but should probably wait until those features are more apparent. In the meantime, however, we can all enjoy these little packages of anticipation.