There was no region of British Columbia that Al Rose did not visit to collect plants and seeds, says Douglas Justice, Associate Director, Horticulture & Collections at UBC Botanical Garden.

Between 1975 and 1979, Al Rose collected approximately 1000 specimens per year for the British Columbia Native Garden in order to establish the collections. In comparison, in the late 2000s, only 300-500 new accessions per year were added for all of UBC Botanical Garden. 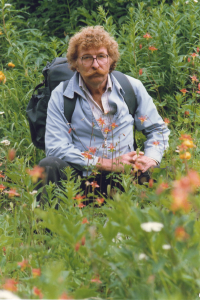 Rose was the first curator-horticulturalist of the Native Garden and a prolific collector of BC’s native plants. He also had the green thumb, a rare talent for growing plants, which translated into an exceptionally diverse collection unsurpassed to this day.

Rose travelled thousands upon thousands of kilometres into every corner of the province to build robust native plant collections. These travels took him from North Vancouver’s Indian Arm to Okanagan’s Osoyoos and into the Rocky Mountains in southeastern BC.

Rose introduced numerous Castilleja (paint brushes) species, a notoriously difficult plant to cultivate, to the collection. He also successfully grew all sorts of dry-land plants and plants from northern BC.

In the mid-80s, Rose had to leave his position with the Garden and unfortunately was not replaced. Reflecting the fragility of a living museum that is a botanical garden, much of Rose’s horticultural work in keeping the specimens alive in cultivation was lost. However, the diversity of Rose’s collections lives on in plants from the local rainforest and the Interior wet belt of BC in the BC Rainforest Garden, Garry Oak Meadow and Woodland Garden, and areas of the Pacific Slope Garden and North American section of the Alpine Garden.