Ah, April showers. Rain at this time of year is imbued with a certain lightness that predicts brighter conditions to come. While there are plenty of flowers pending in May, April is certainly the most important month for rhododendron viewing at UBC Botanical Garden.

Our rhododendron collections primarily consist of wild plants, grown from seed collected from rhododendrons in habitat. The greater proportion of these are Asian species, which are mostly in flower in April. And the greater proportion of the collection is, as a consequence, located in the David C. Lam Asian Garden.  Given a mild winter, a number of species will have already started flowering, such as Rhododendron barbatum, R. praevernum (both on Stearn Trail), R. pachytrichum (Stearn Trail and Lower Asian Way), R. sutchuenense, (Flanagan Trail), R. lutescens (Kingdon Ward Way) and R. principis (Henry Trail). If conditions remain cool through March and into April, these rhododendrons will still be showing their stuff through much of this month.

While the majority of the Garden’s more than 500 different rhododendrons are located in the Asian Garden, there are also rhododendrons in other locations in UBC Botanical Garden. Those in the Carolinian Forest Garden and the BC Rainforest Garden are likely to wait until May before opening their flowers. A number of rhododendrons originating from eastern North America will even normally postpone floral activity until well into June, but there is one eastern species in the E. H. Lohbrunner Alpine Garden, Rhododendron canadense, that can be relied upon to display its exuberant blooms in April. Native to eastern Canada, the Maritimes and the northeastern United States, R. canadense is an unusual deciduous azalea on account of its small but showy rose-purple to pink flowers. The flowers are split such that they appear to consist of three separate petals. Most azaleas have five petals that are fused for about half their length, producing a flaring flower with a funnel-shaped base. In R. canadense, three petals are fused and two are not. Note also that these flowers have ten stamens, rather than the typical five found in most azaleas. There is a small grouping of R. canadense at the western end of the North American section in the Alpine Garden.

Another April-flowering, ten-stamened azalea is Rhododendron quinquefolium. This is a Japanese deciduous azalea noted, unusually, not for its flowers, but for its layered branching and beautiful, early emerging leaves. These leaves are rather small, roughly diamond shaped, green with a purplish edge, and borne in fives, with each cluster radiating around the stem tips (quinquefolium means “with five leaves”). The flowers—dainty white bells that hang down below the leaves—are also beautiful. There is a single specimen with an amazingly twisted stem at the southwestern end of the Asian section of the Alpine Garden.

At the other end of the Asian section, bordering the service road, is a large specimen of Rhododendron leucaspis, a white-flowered, mounding evergreen that hails from alpine habitats in Tibet. The flowers open flat, the contrasting brown anthers conspicuous against the white background. Even without its shield-like flowers (leuco = white and aspis = shield), the leaves and stems are covered in an attractive vestiture of bristly hairs.

Rhododendron spiciferum is a different sort of Asian species. A sprawling evergreen shrub from western China, R. spiciferum has lax stems and small leaves that are endowed with gland-tipped hairs. These are responsible for the pleasant, spicy aroma that surrounds the plant. The bright pink flowers are small, but produced in clusters at the tips of the stems in April. This plant is tucked up between the rocks behind the pond, but clearly visible from the path (and there is another on Cox Trail in the Asian Garden).

Let us know which of UBC Botanical Garden’s rhododendrons are your favourite in a comment below. 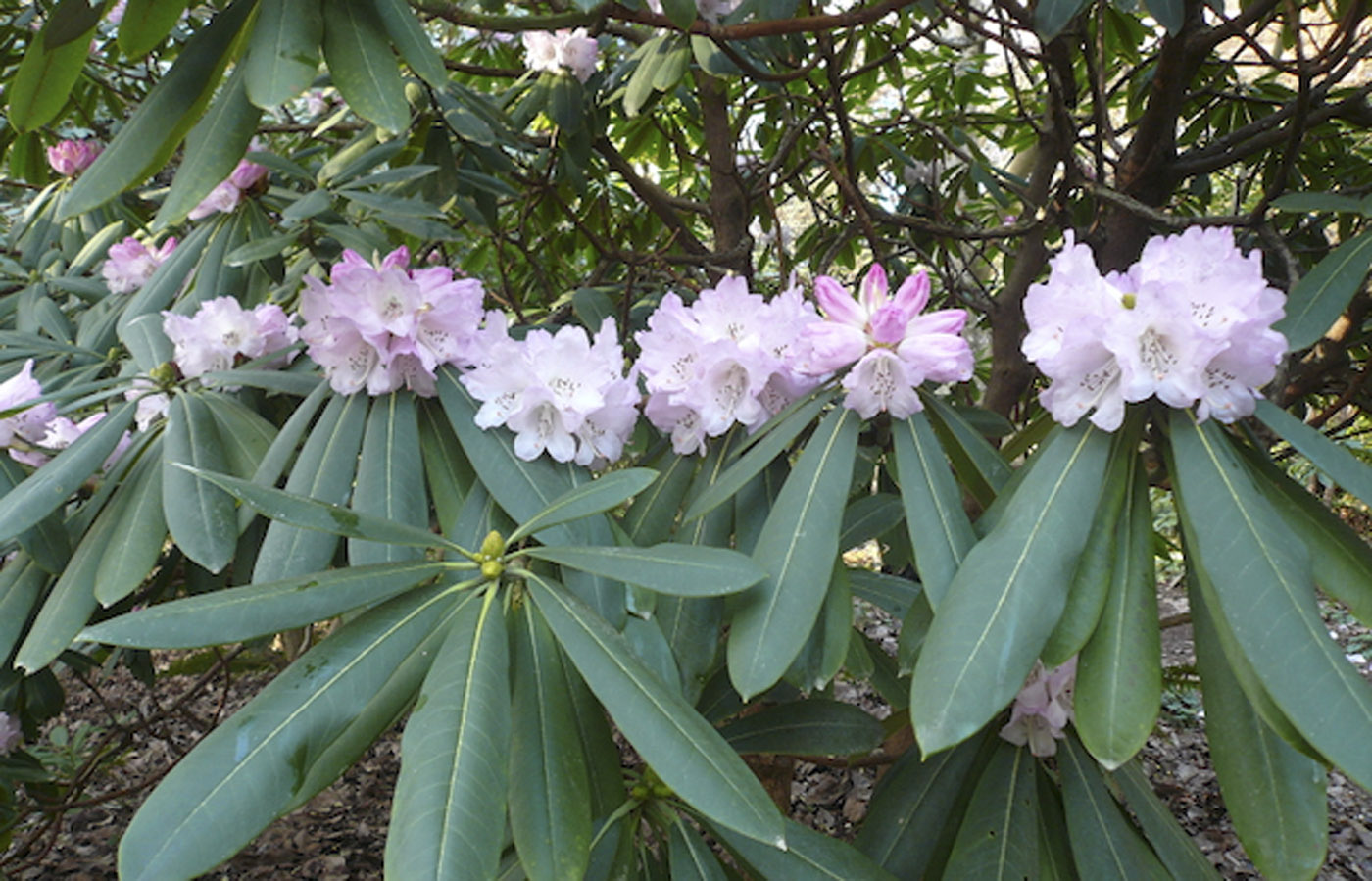 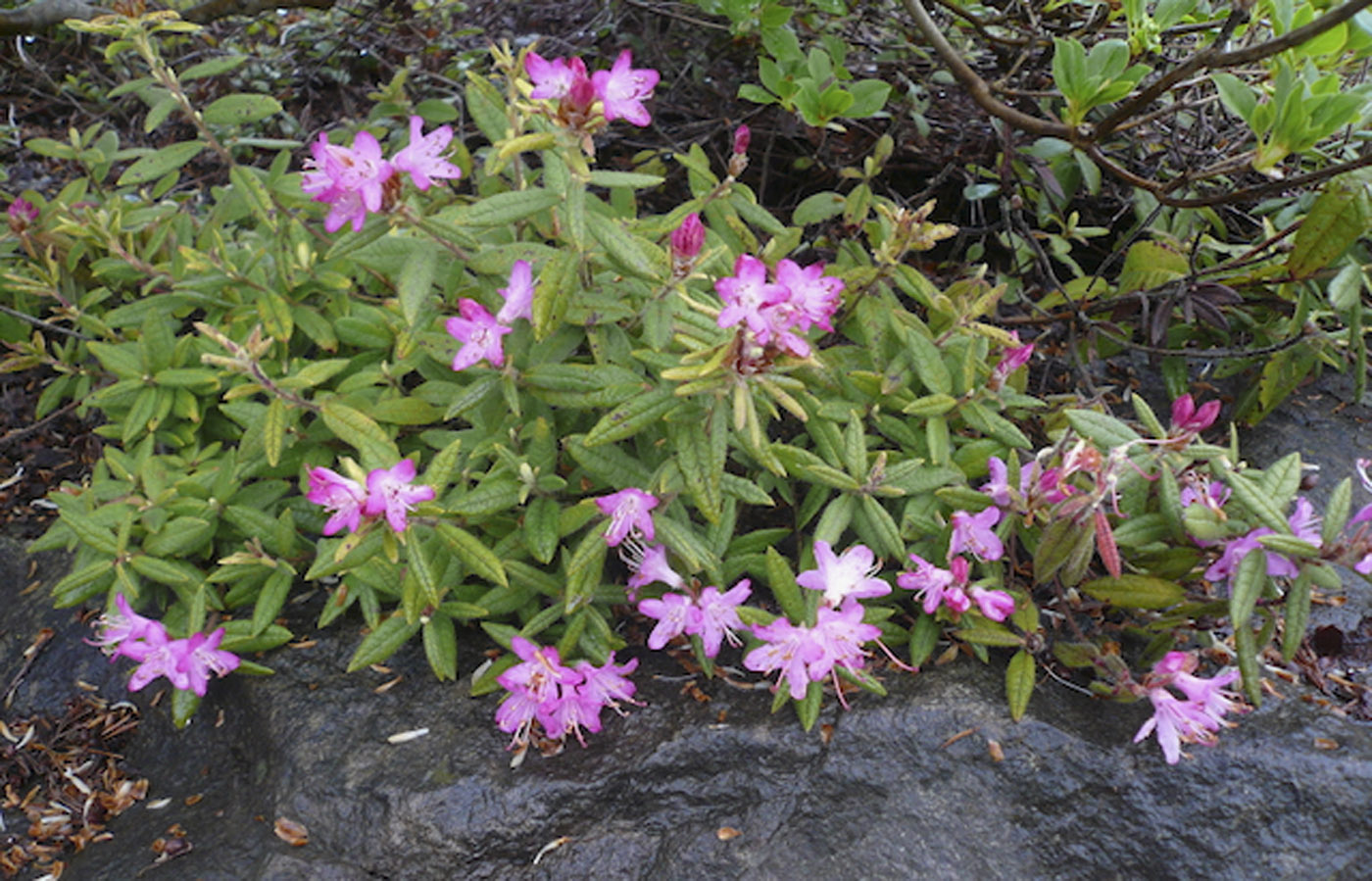 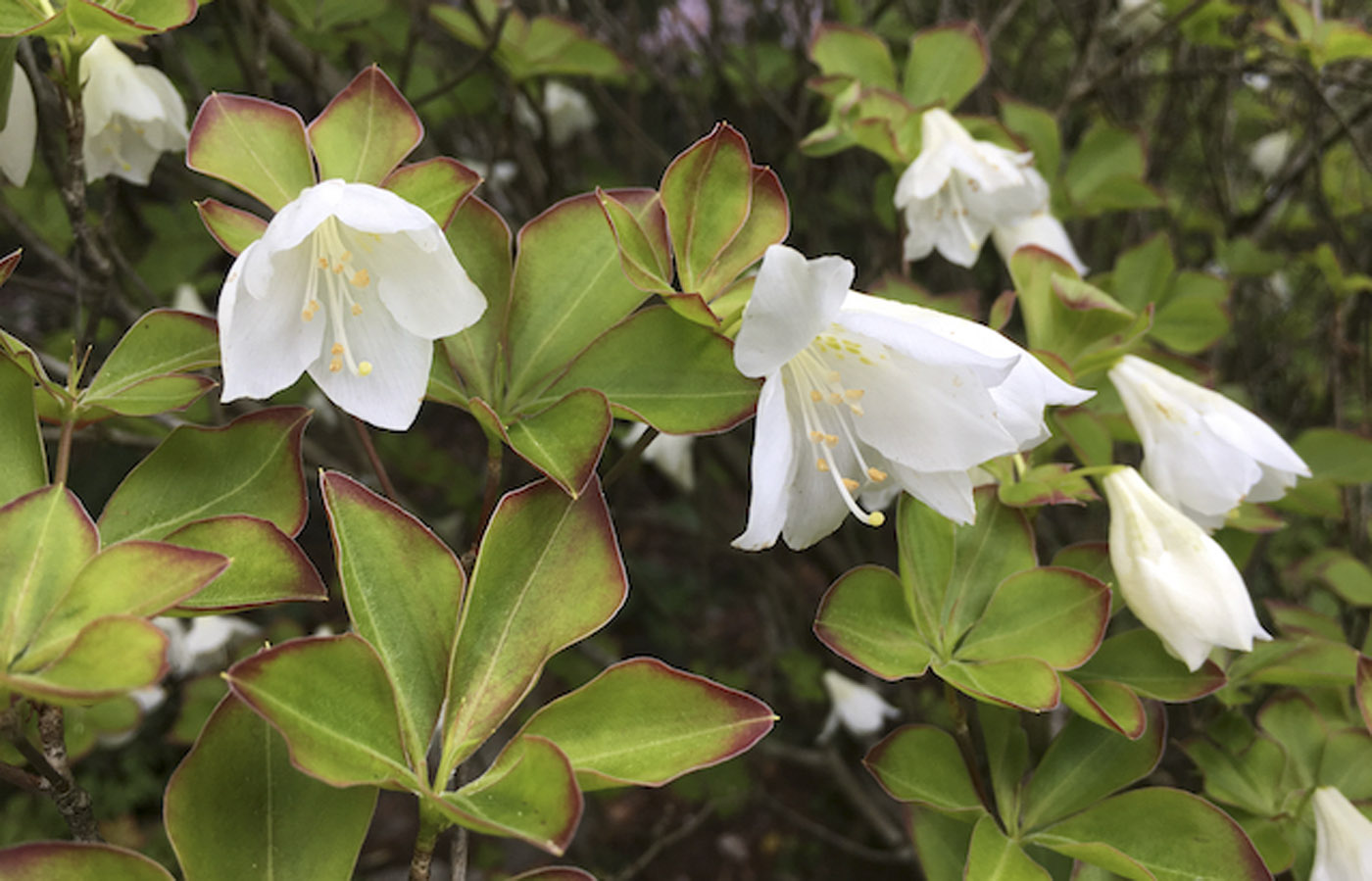 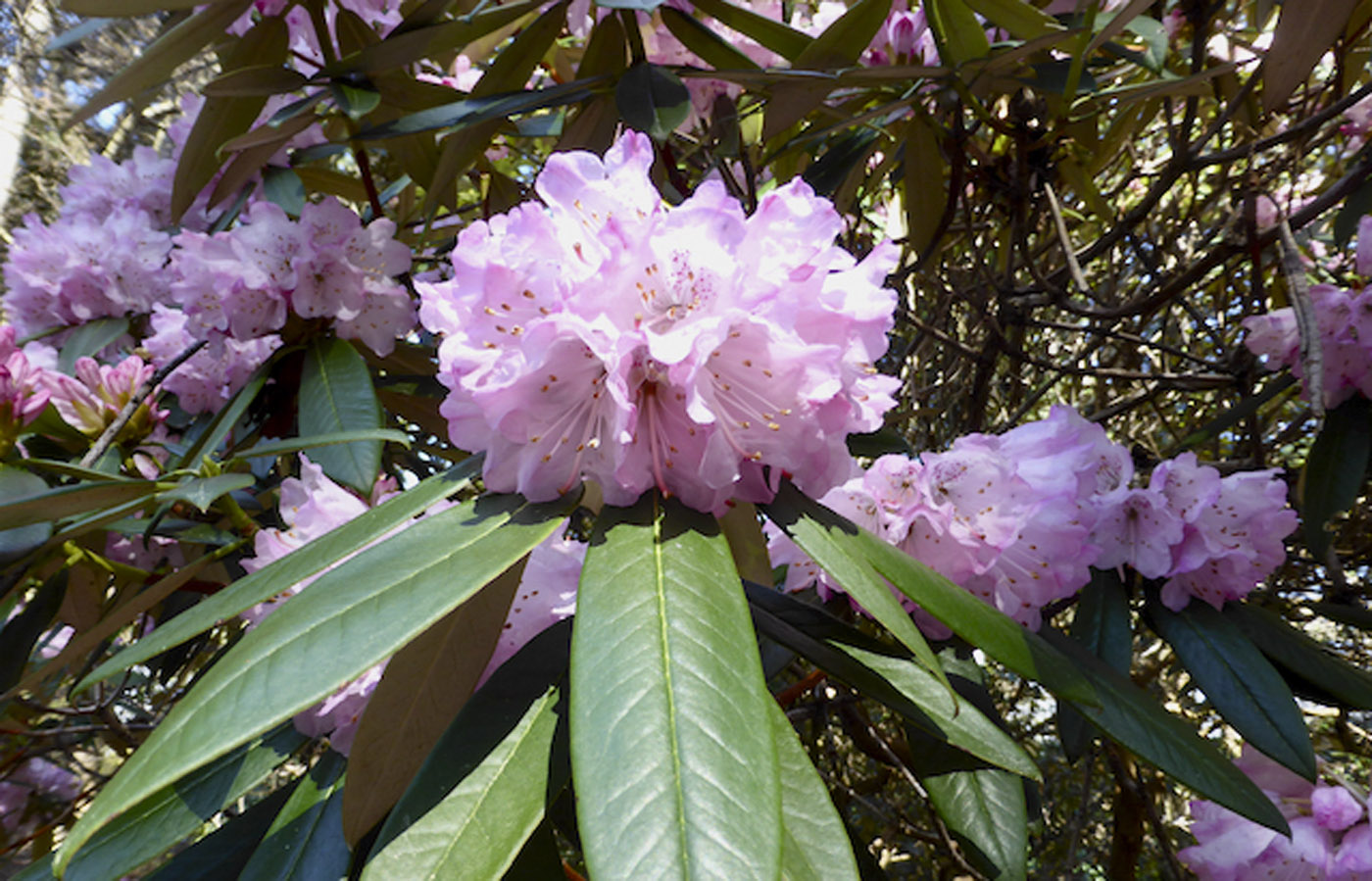 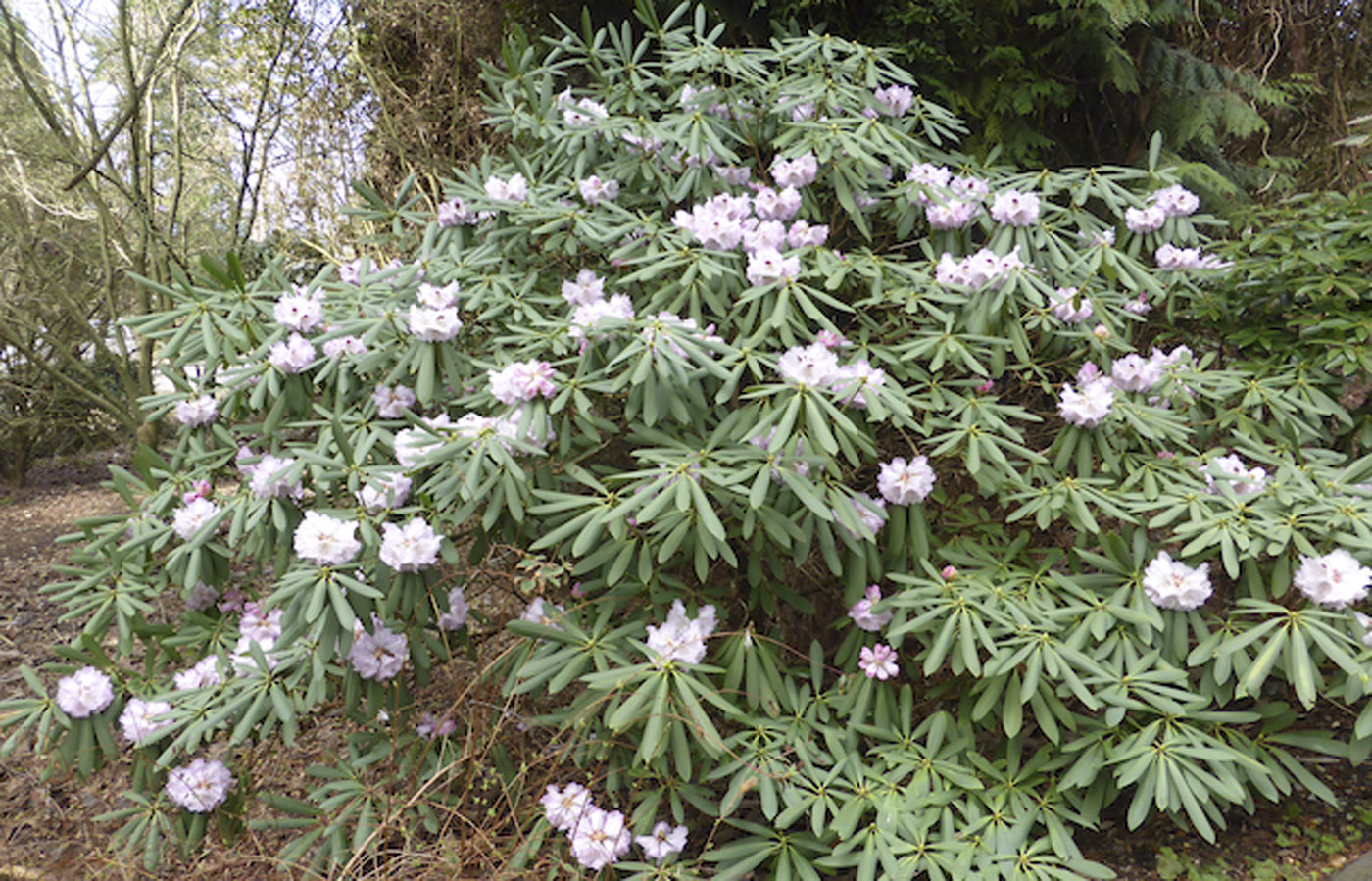 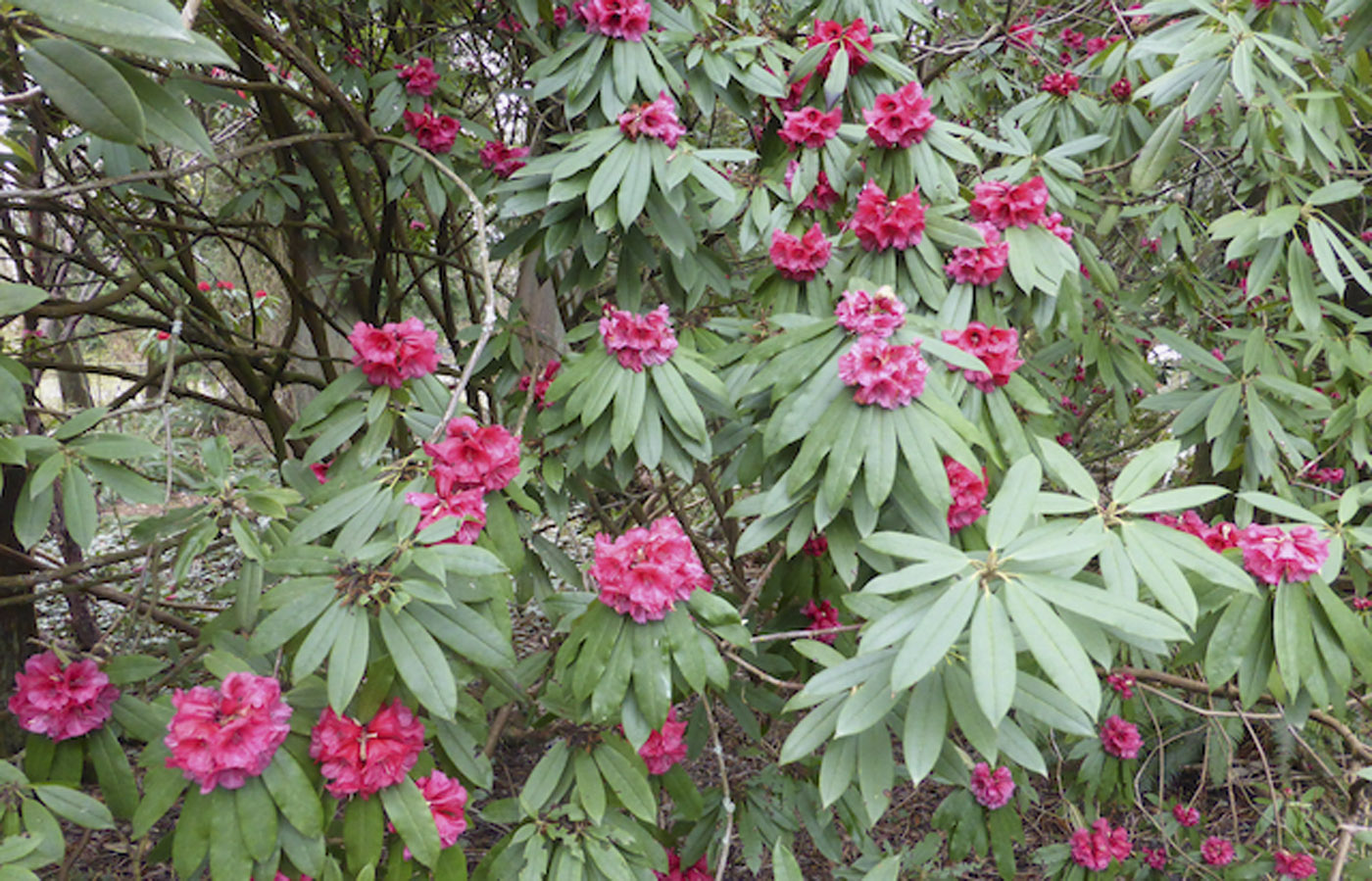 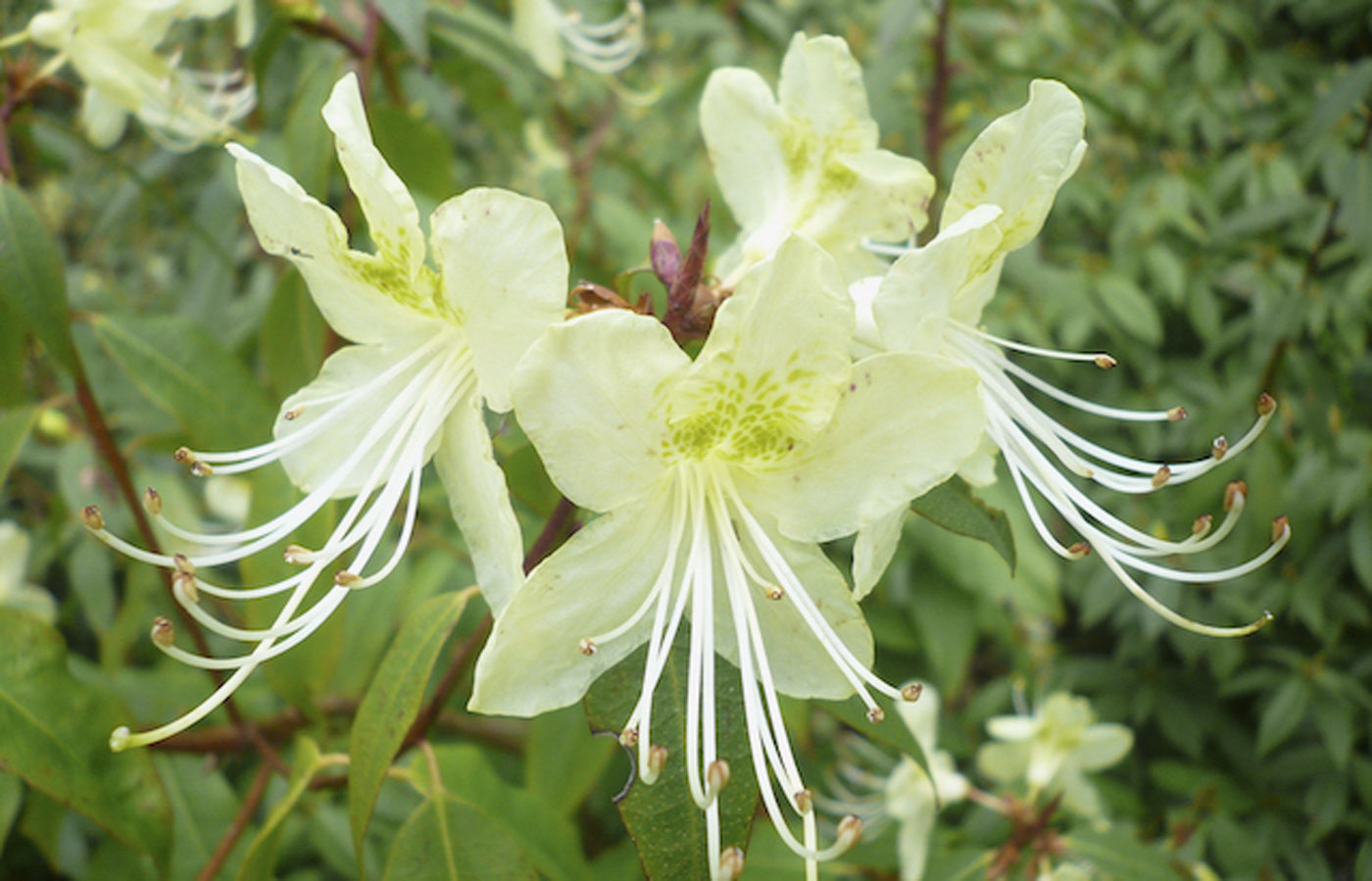 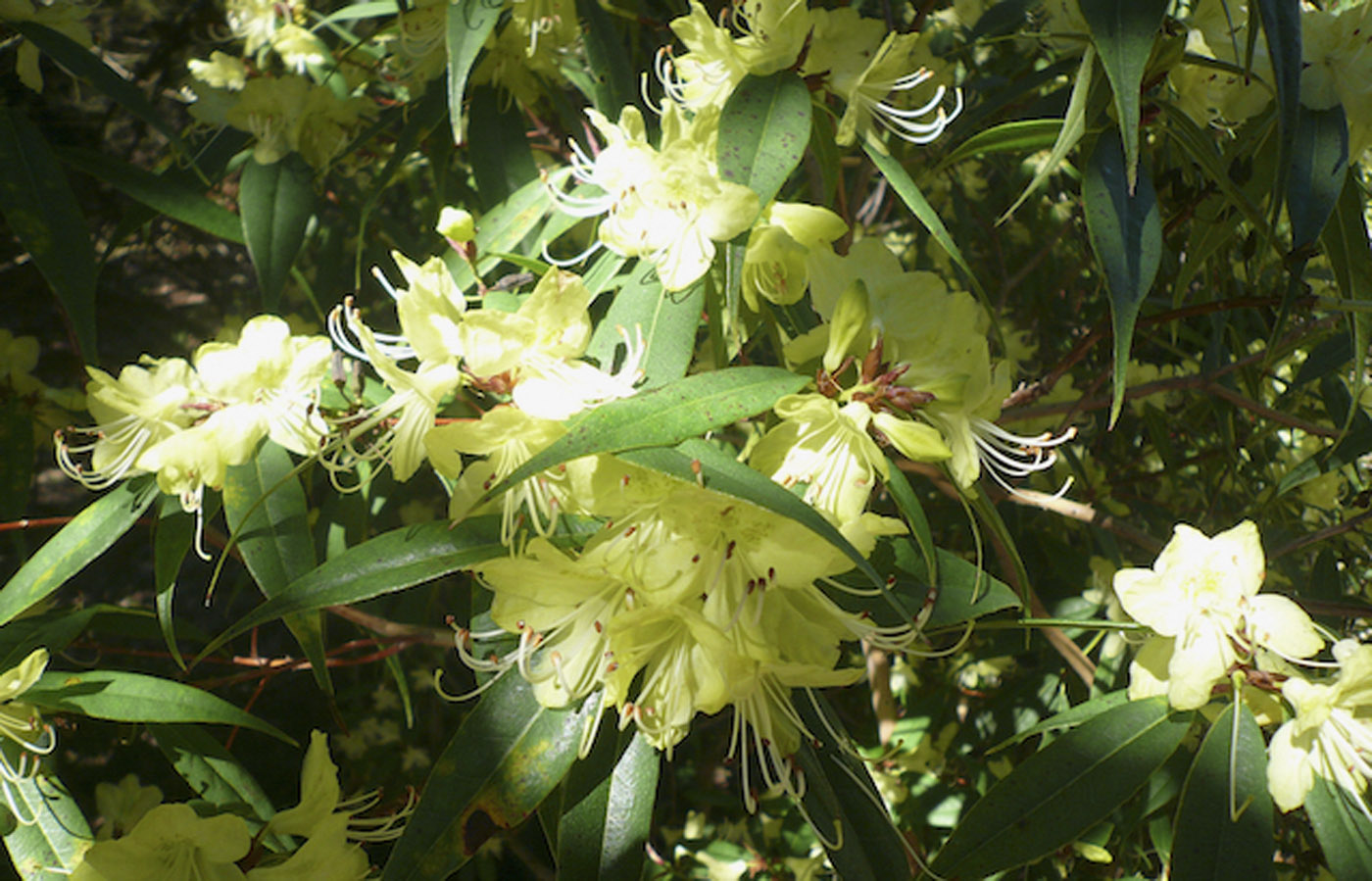 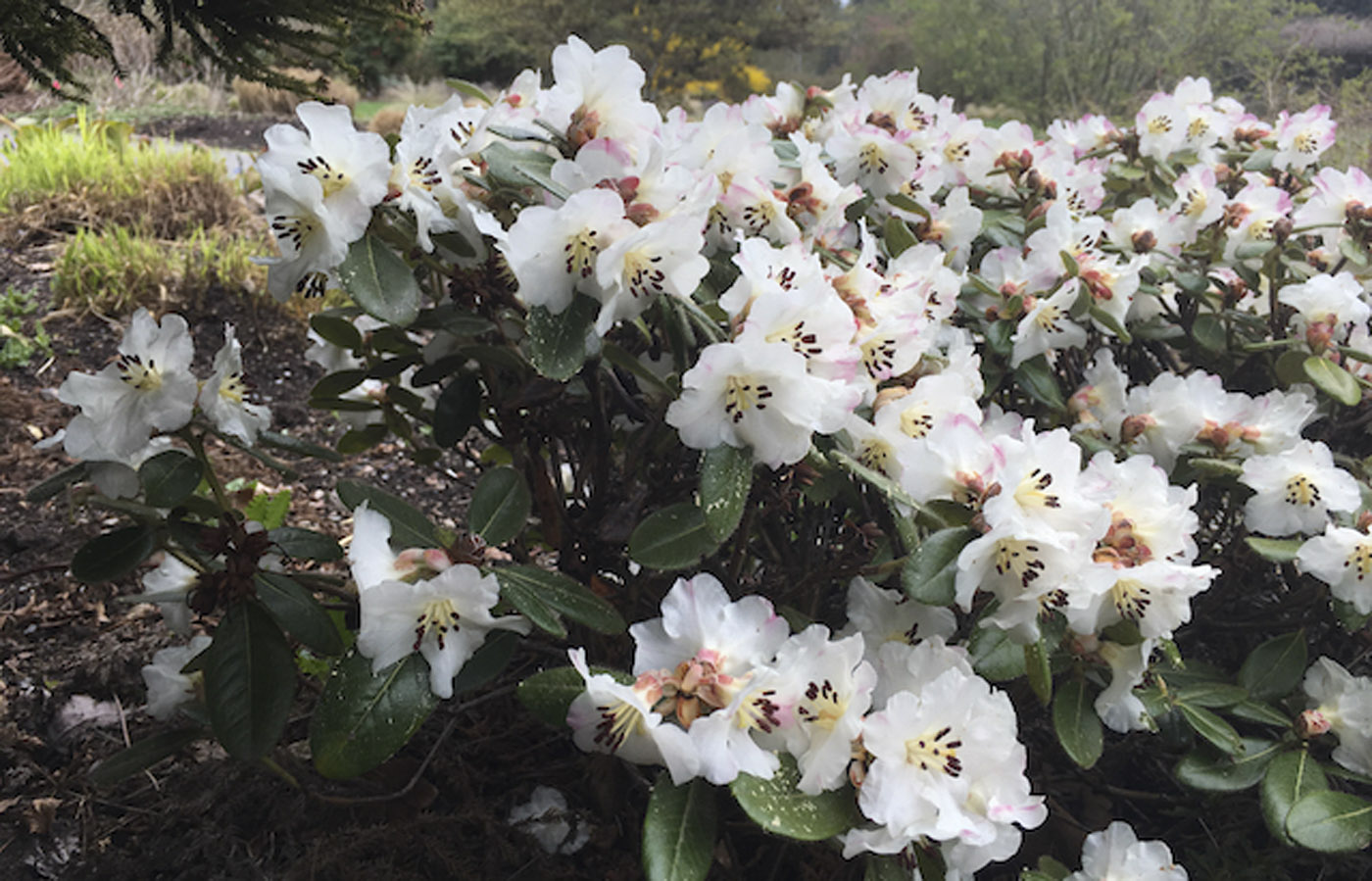 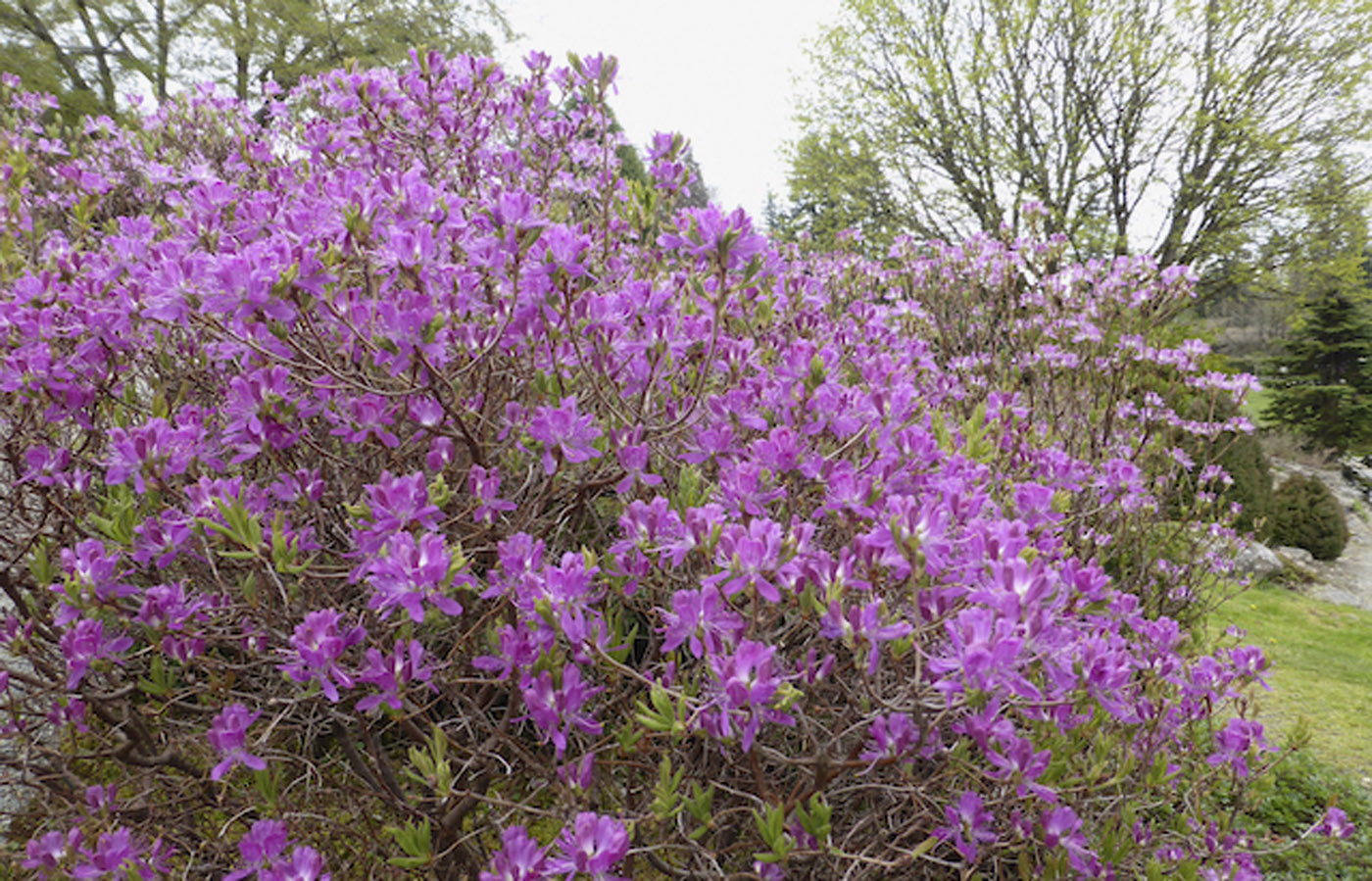 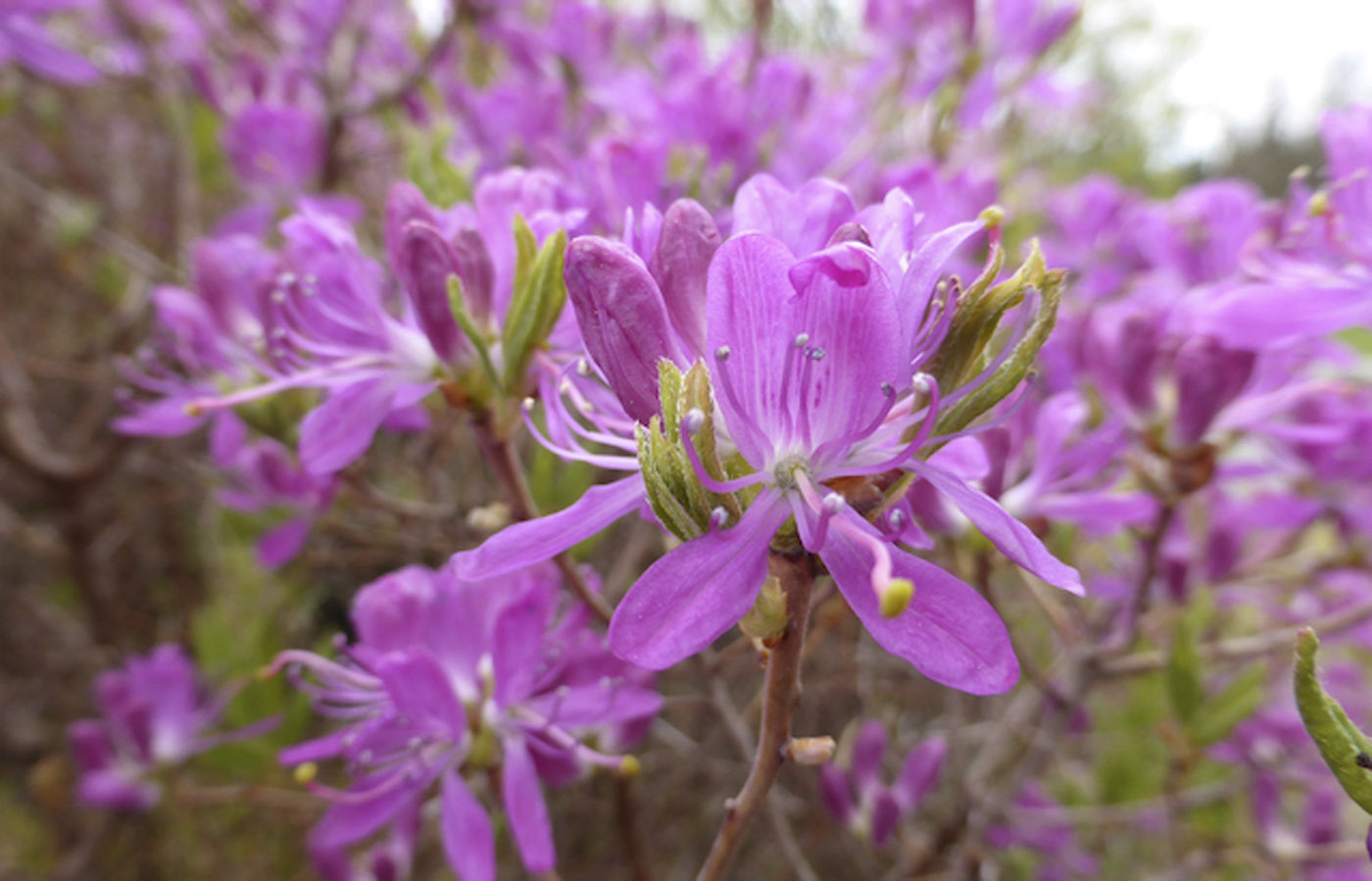 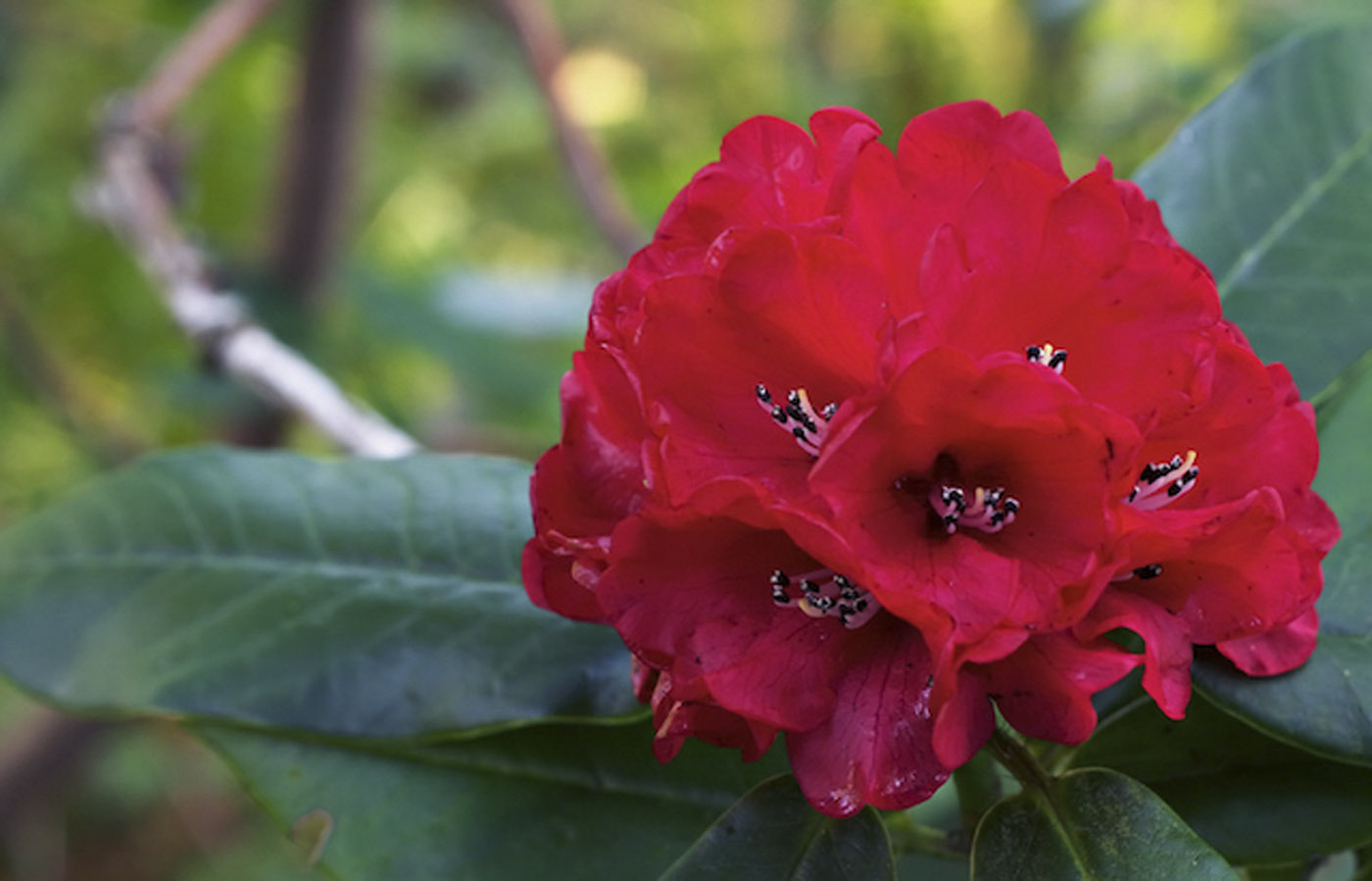 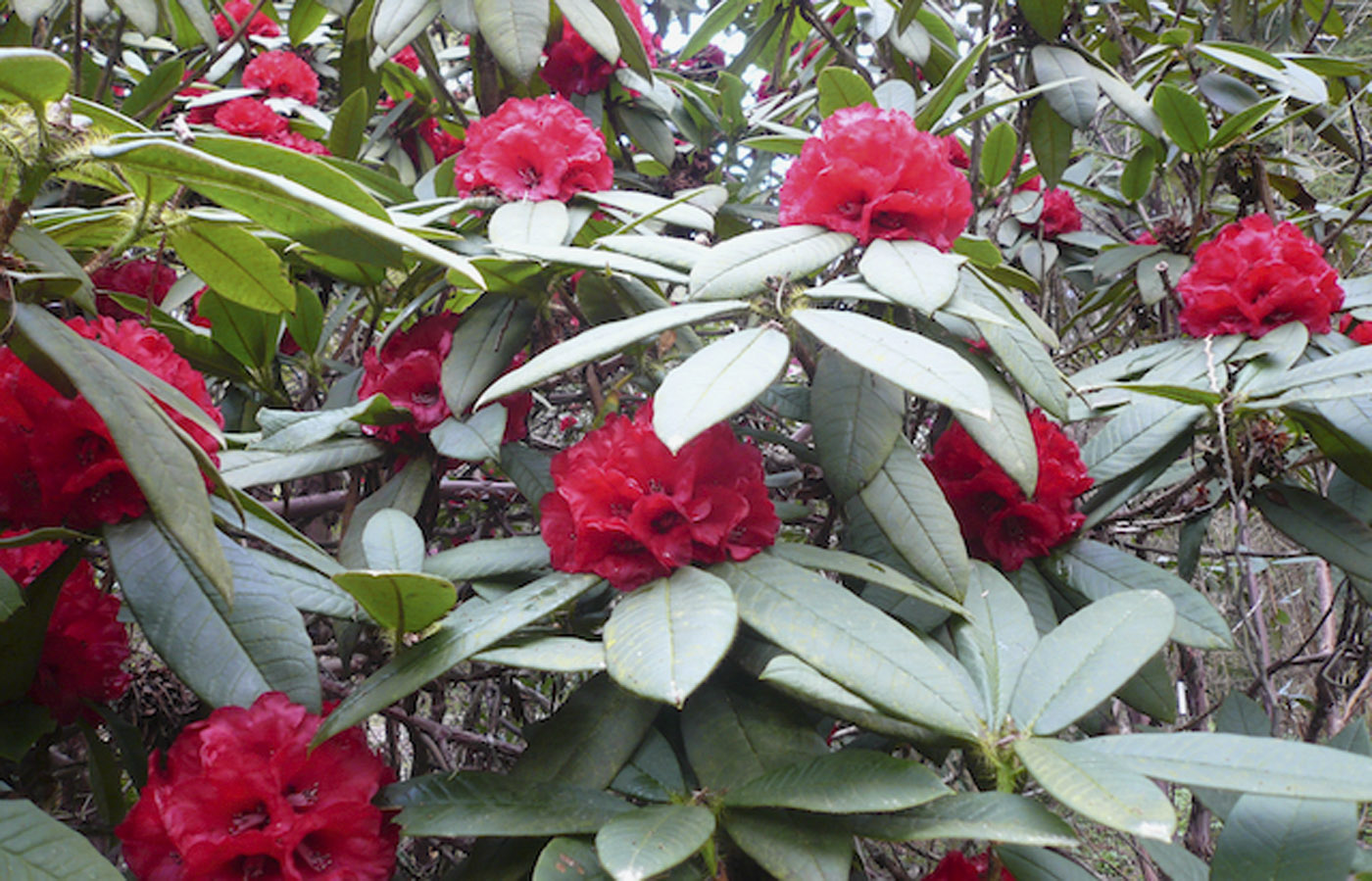