February in the Garden 2022

In the winter, woody plants with bark that lifts, shreds, unravels or otherwise exfoliates are often those that elicit the greatest number of comments from visitors to the Botanical Garden. The spectacular Acer griseum (paperbark maple) is justly famous for its peeling and flaking coffee-coloured bark, especially when the sun’s low-angled rays catch its glowing, raggedy edges in midwinter. Another exceptional peeler is Arbutus menziesii (arbutus or Pacific madrone), which is Canada’s only broadleaved evergreen tree. Familiar to most of us because it is common in the rain-shadow areas of the south coast, such as southwestern Vancouver Island and the Gulf Islands, its cinnamon-brown, paper-like bark is shed in brittle sheets and flakes, annually exposing expanses of smooth, creamy yellow-green under-bark. Peeling bark is a common feature with plants in the rhododendron family, such as Arbutus, and it is a moderately frequent feature of rhododendrons, as well. The papery bark of Rhododendron hodgsonii (Hodgson’s tree rhododendron) peels away in delicate but sizeable flakes from its mauve-grey stems, while the dusty-red, waxed-paper bark of Rhododendron argipeplum collects in tattered sheets around the bases of its branches. Staying with the rhododendron family, the western North American manzanitas (Arctostaphylos species), which are shrubby, close relatives of Arbutus, are famous for their sculptural stems and richly-coloured, peeling papery bark. Arctostaphylos manzanita which goes by the common name manzanita, exemplifies this beautifully with its dark-chocolate- to chestnut-coloured stems.

A similar effect is seen with a number of camellia relatives, including Stewartia sinensis (Chinese stewartia). The red-brown bark of this species peels away to expose fluid patches of cream and grey under-bark. The subtler Stewartia serrata (sawtooth or nodding stewartia) only gives up its pale, orange-brown bark after many decades of growth, and then, only in tiny flakes. Camellias themselves are sometimes celebrated for their attractive bark. Without its flowers, one might mistake Camellia oleifera (tea-oil camellia) for a manzanita, but its sumptuous, caramel-brown stems are surprisingly suede-like—not the least bit papery or detachable. In temperate gardens the most renowned species in the camellia family is undoubtedly Stewartia pseudocamellia (Japanese stewartia) with its large jigsaw-like scales in shades of grey, brown and tan. Still, Lagerstroemia subcostata var. fauriei (Japanese crepe myrtle), an unrelated tree in the pomegranate family, but with a similar geographic distribution, is more than a worthy match with its stunning grey, deep brown and rusty-red bark. Small splinters, rolls and flakes of this exquisite bark exfoliate from its slender branches, leaving a mosaic of stunning beauty.

Exfoliating bark is not always multi-hued, nor even particularly ornamental to some eyes. Clematis montana, for example, has (and most other clematis have) greyish-tan bark that shreds in long strips. This looks messy to some, but others (like me) see the natural disorderliness as a complement to the jumble of coiling stems on older specimens. Heptacodium miconioides (seven-son flower) produces a similarly rustic, frayed effect on its muscular, ascending stems. A number of shrubs in the Garden have dull grey-brown, dried onion-skin-like bark. Look to Dipelta floribunda (rosy dipelta) and Physocarpus capitatus (Pacific ninebark) if you are interested in the effect, but there are numerous others with similar bark. Thin, peeling bark is also common in some birches, though in the species that exfoliate (not all birches do), the sheets are always marked by distinctive horizontal lenticels (pores for gas exchange). Betula alleghaniensis (yellow birch) sheds gauzy flakes that stick like wet tissue to the polished brown bark below. Arguably, few birches express the degree of exfoliation that Betula utilis var. albosinensis (Chinese red-bark birch) does, with its broad, thin sheets and rolls of papery bark. For the group of these birches near Fortune Trail, the curling, papery bark of Rhododendron tubiforme planted nearby echoes the russet brown of the birch’s darker under-bark, but the exquisite peeling vestiture of this species ranges through shades of dusty rose, white and paler pink, as well.

Eucalyptus, too, provide all kinds of colourful shredding and shedding bark. On Eucalyptus coccifera (Kunanyi or Mt. Wellington peppermint), discarded bark hangs off larger tan and cream-coloured branches in thick, leathery, dark brown hanks and rolls. A similar effect is displayed by the spinning gum, Eucalyptus perriniana, but the eye-catching under-bark of this species is streaked with tan and blue. Few gum trees can match the peeling rusty-red-over-cream bark of Eucalyptus rubida, nor its thick gingerbread-coloured bark that cracks and splits away in shards of varying sizes. Not to be outdone, the chalk-white bark of Eucalyptus pauciflora subsp. niphophila (snow gum) gradually darkens before detaching in curving sage-green, blue-grey and tan scales to expose the new white bark below.

Like the elastic cells in corky bark, peeling bark is another adaptation that provides a protective layer to the stems of woody plants as they grow larger and expand in diameter. And while exfoliating bark clearly affords less cushioning and insulation, ecophysiologists believe that as a tree’s bark is shed it prevents climbers, epiphytes and parasites from establishing on its stems. Whatever the reason for a particular kind of bark, it’s definitely worth a closer look. 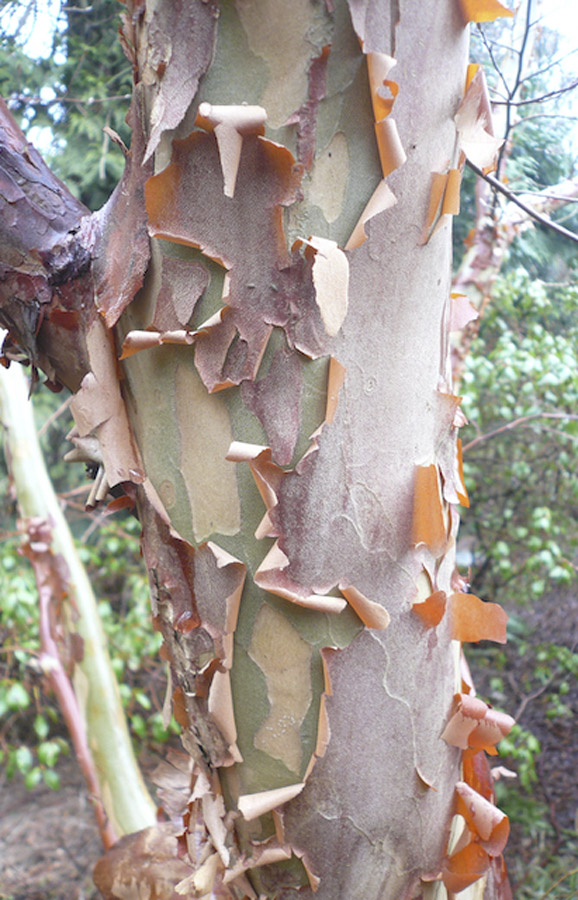 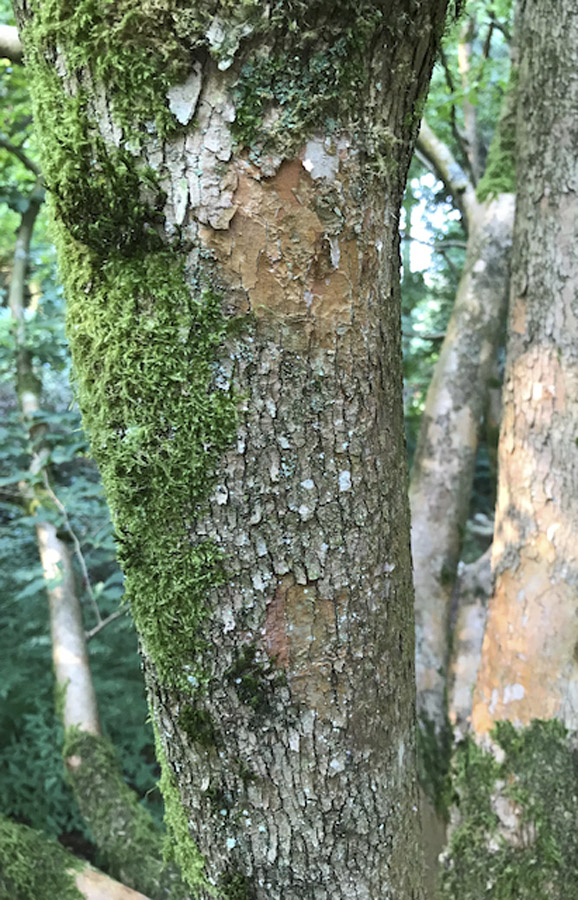 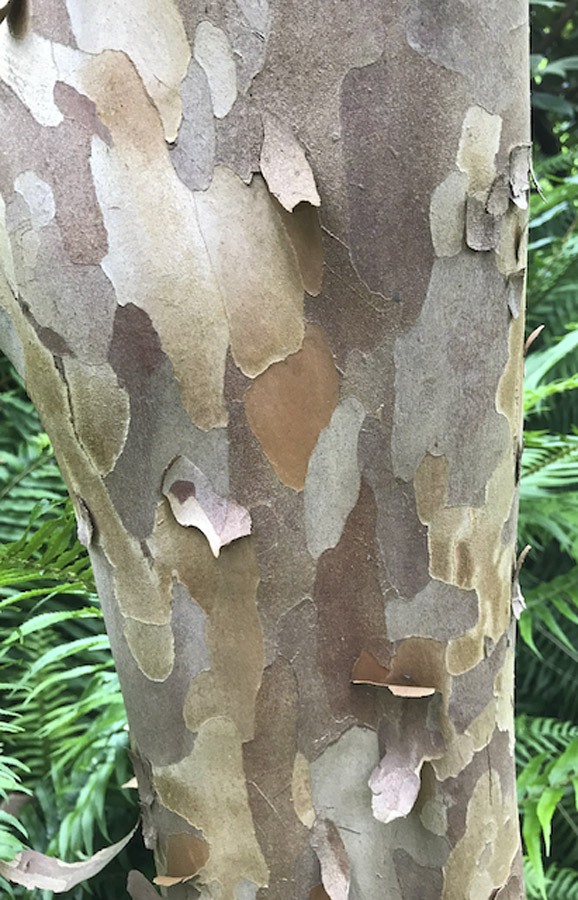 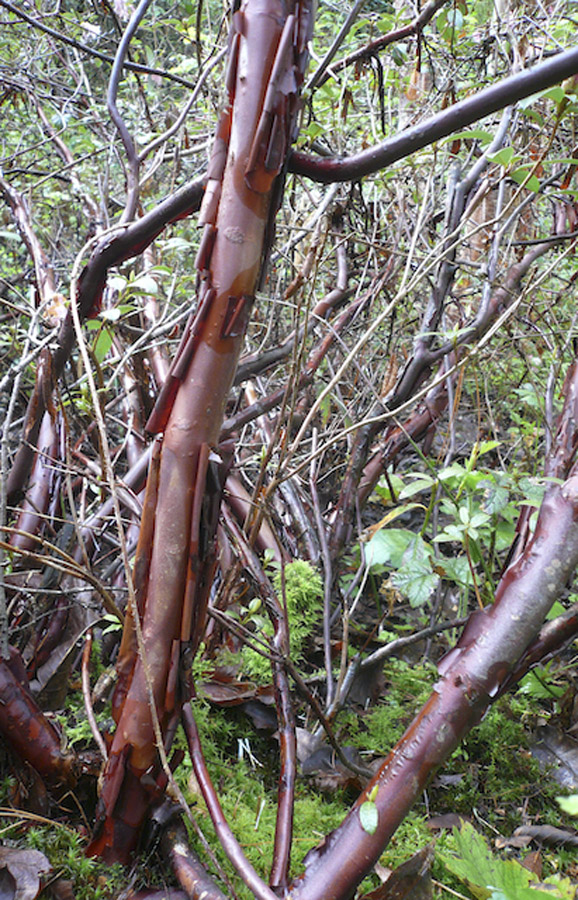 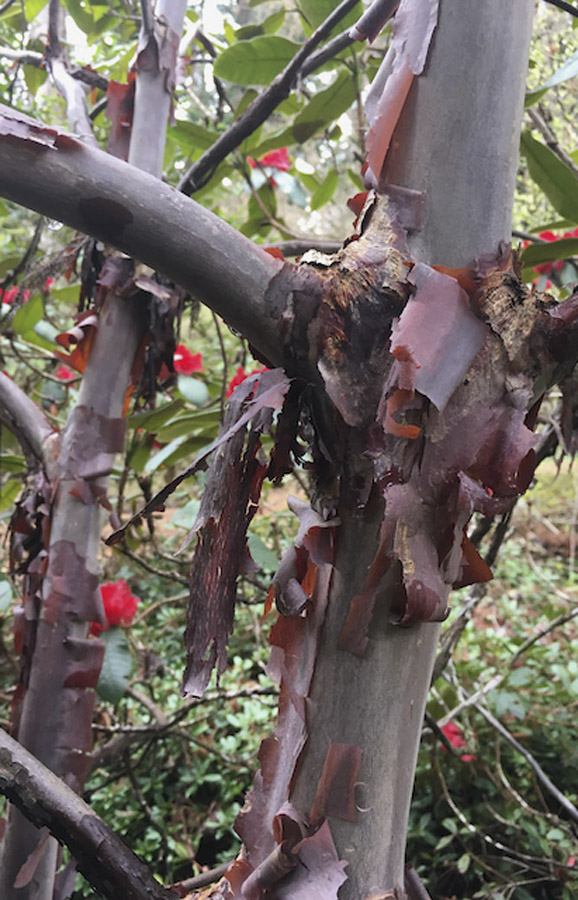 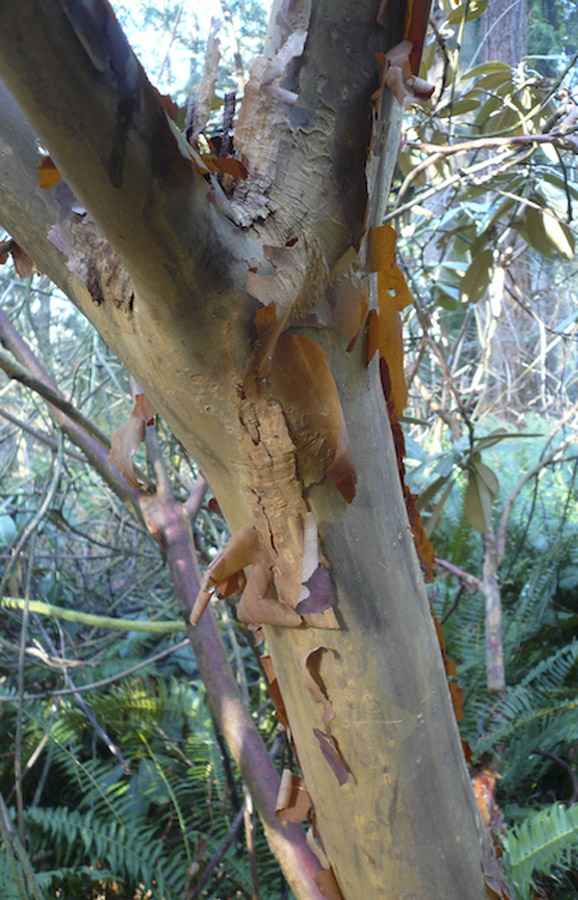 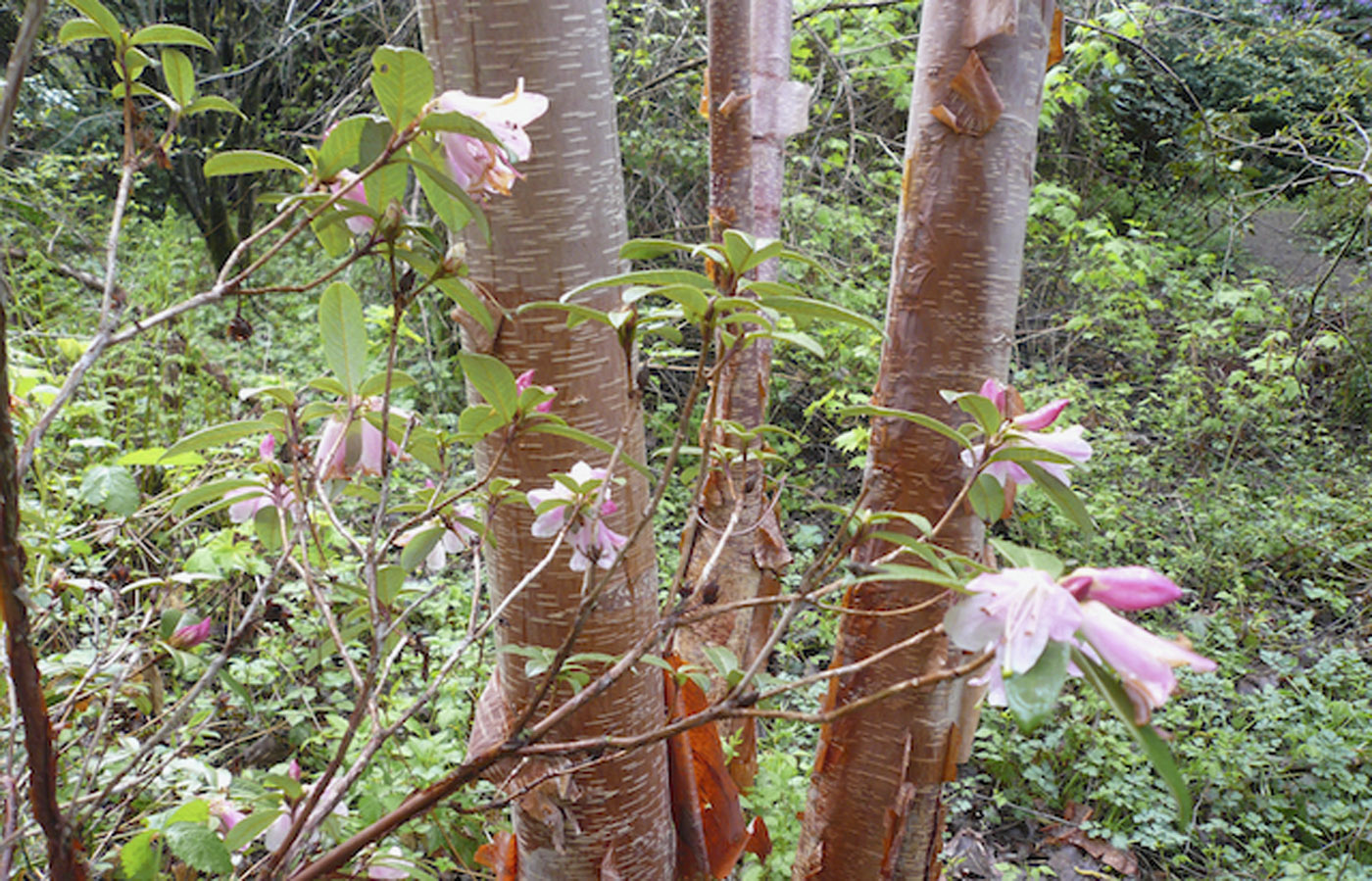 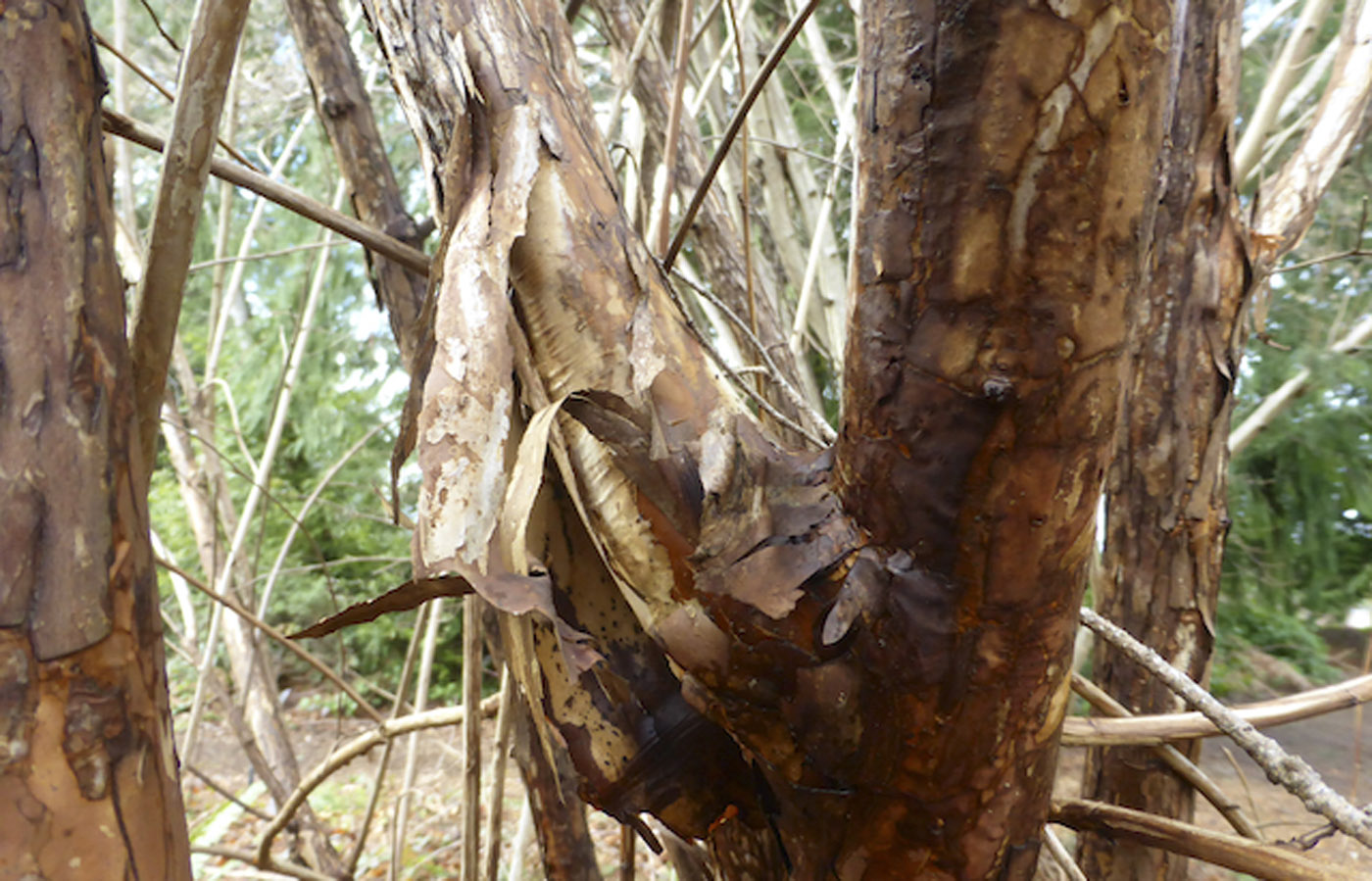 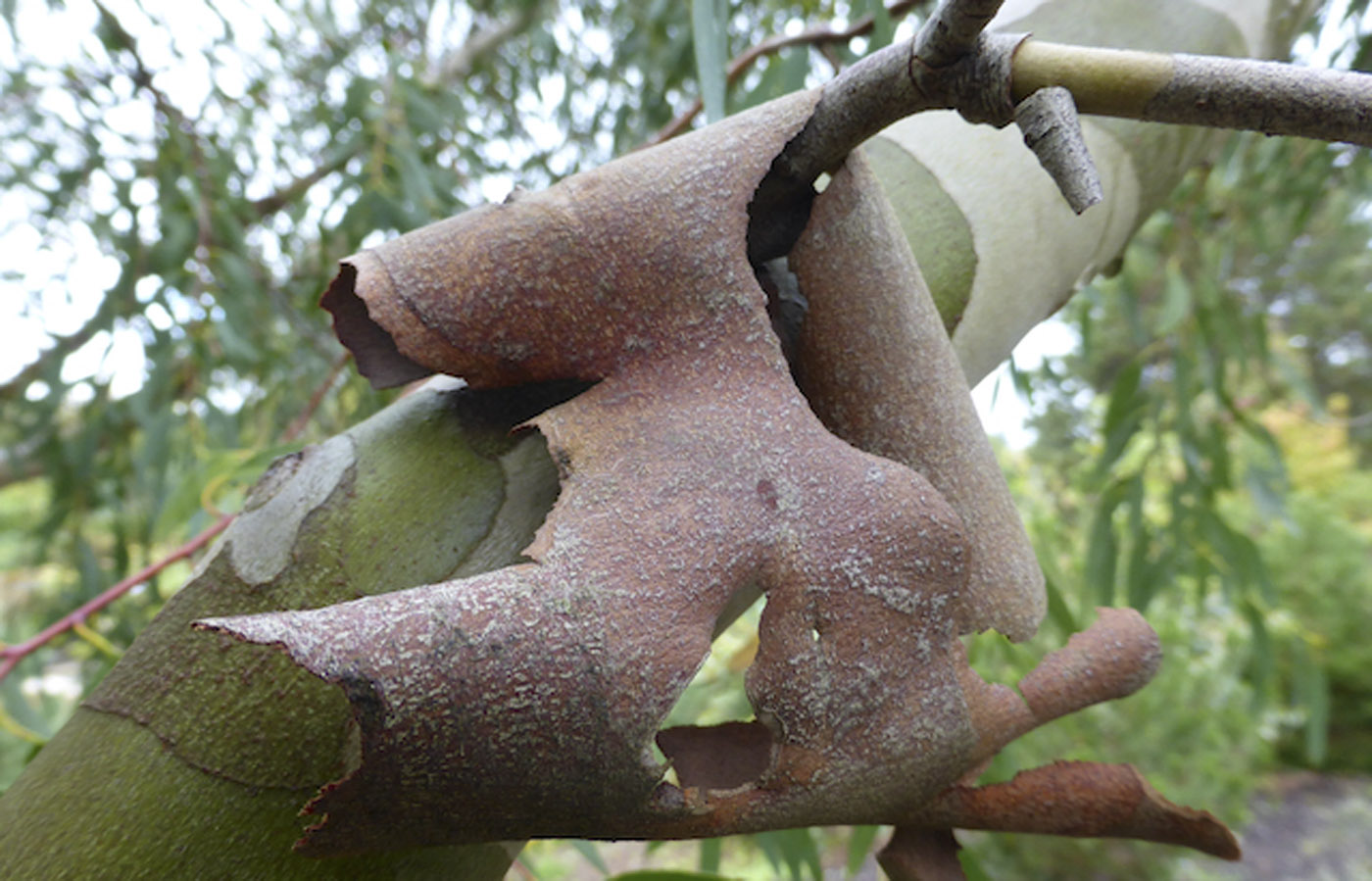 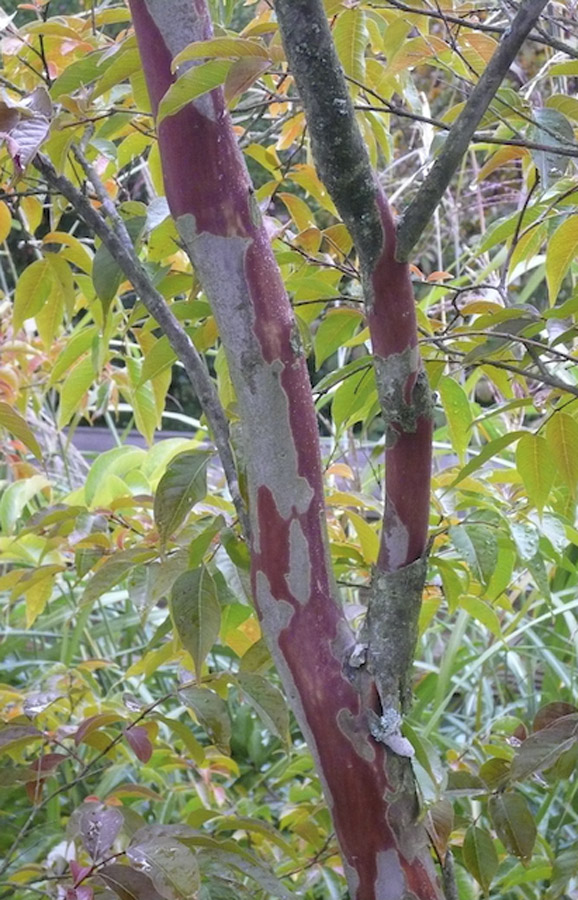 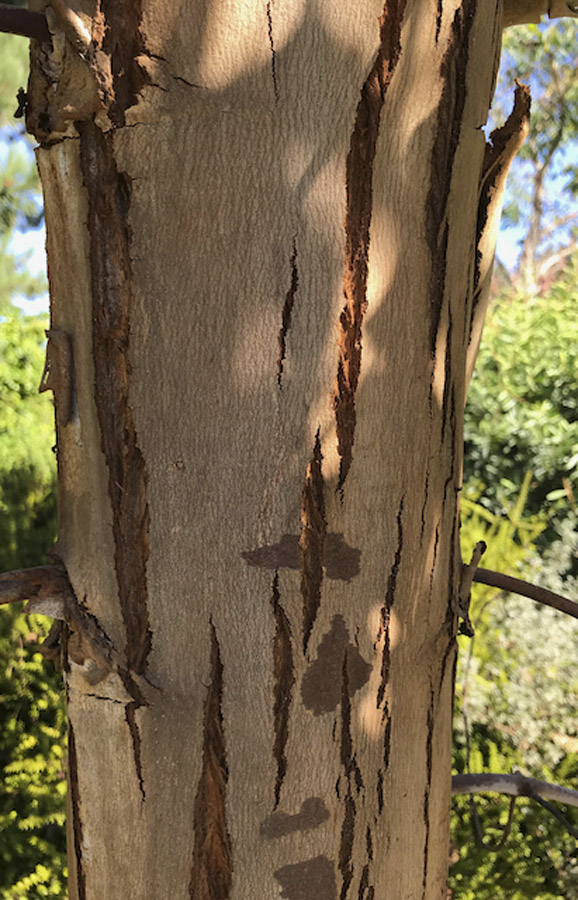 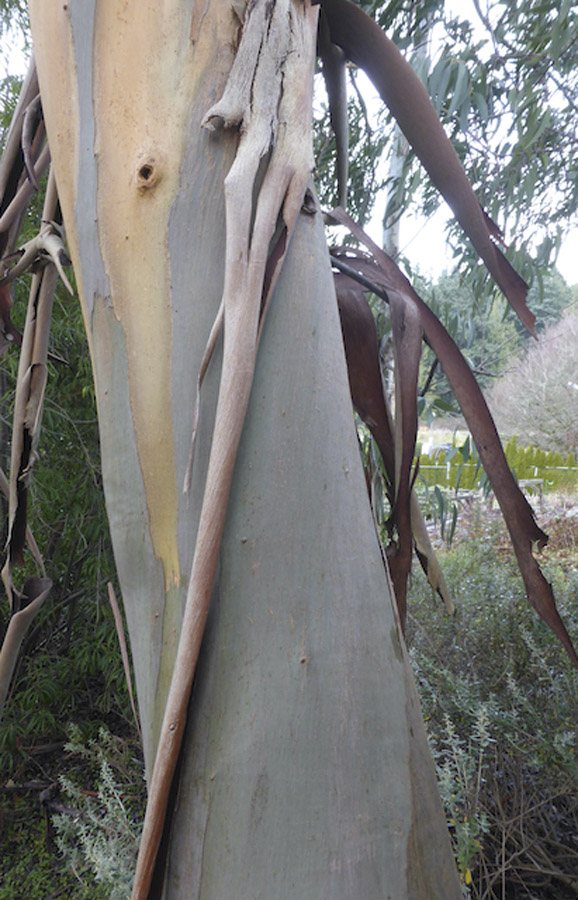 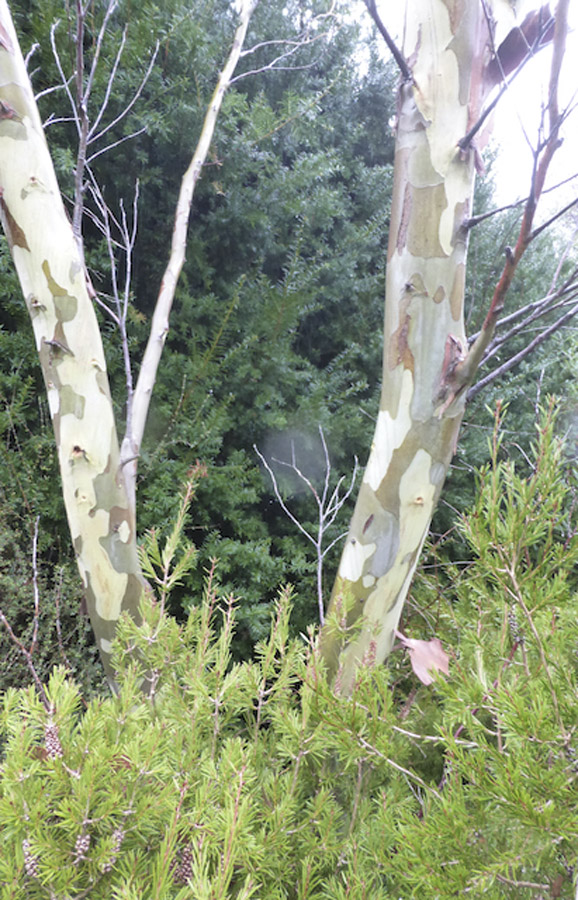 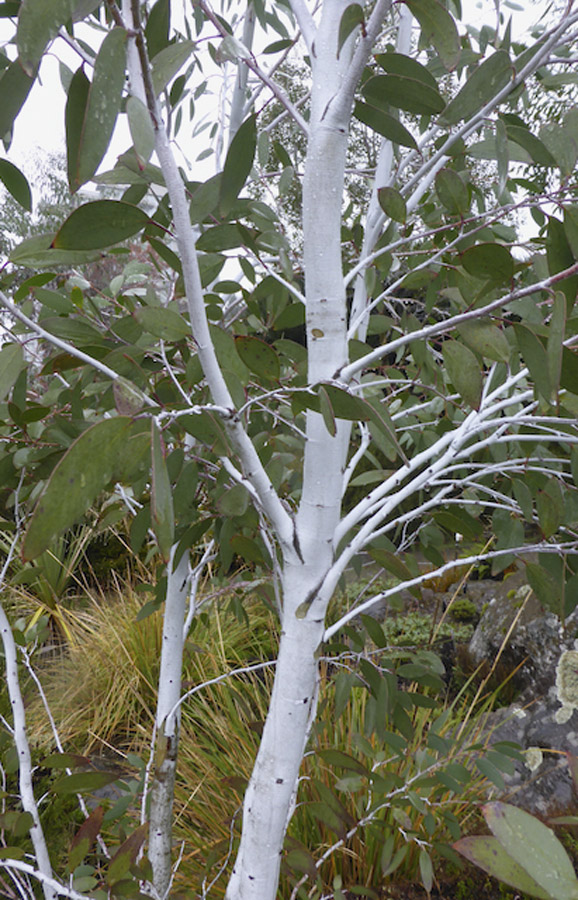 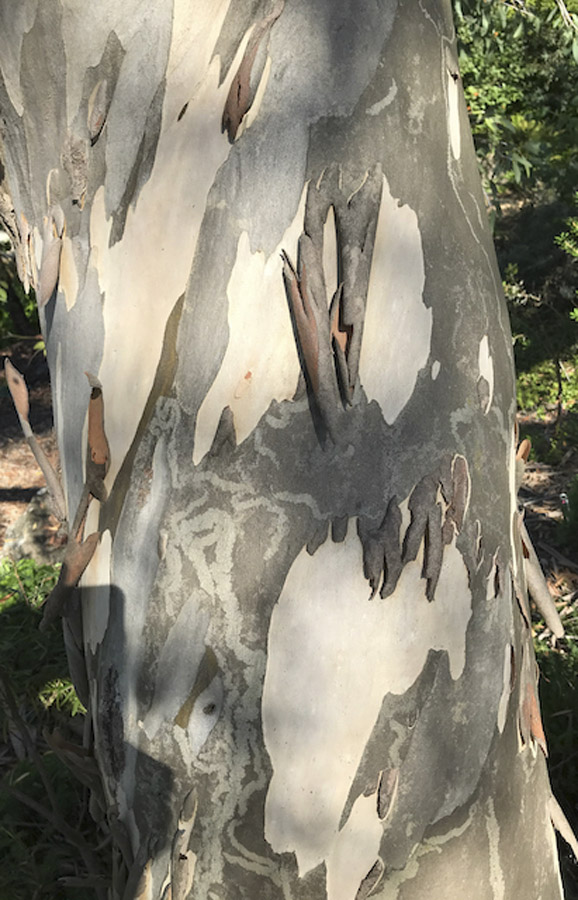 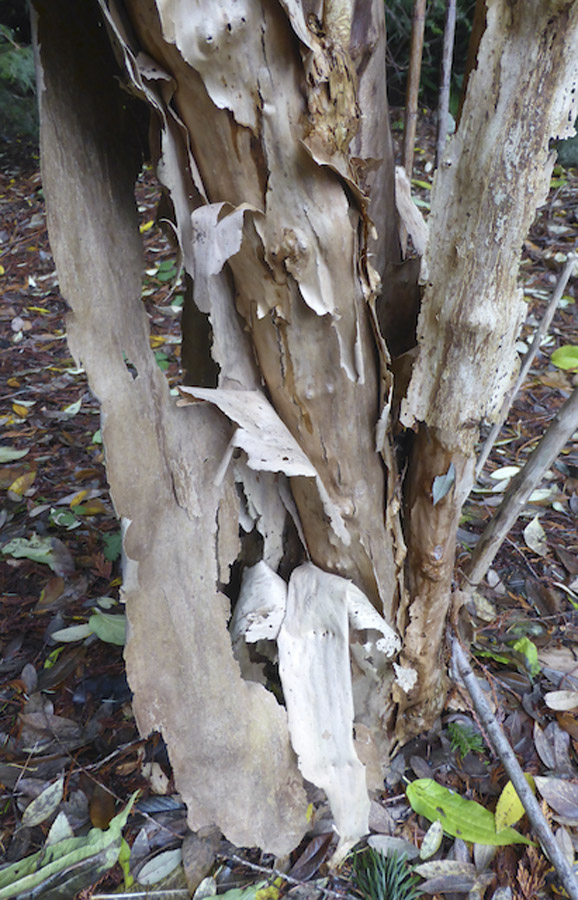 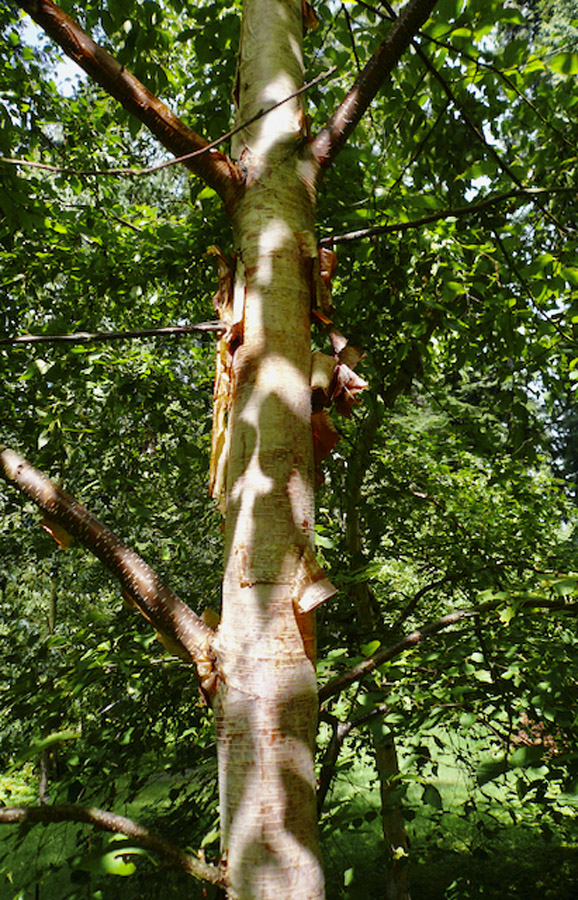 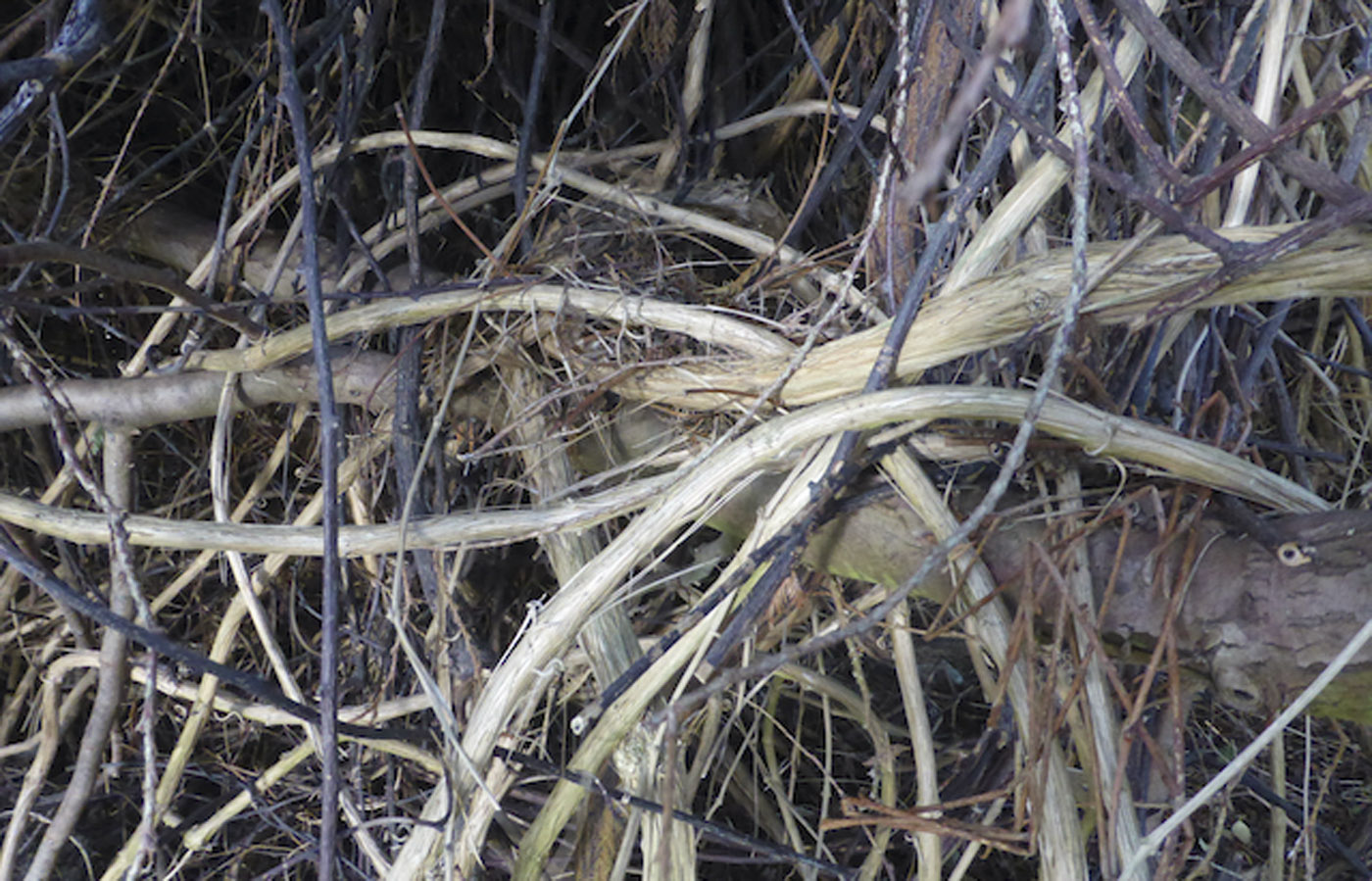 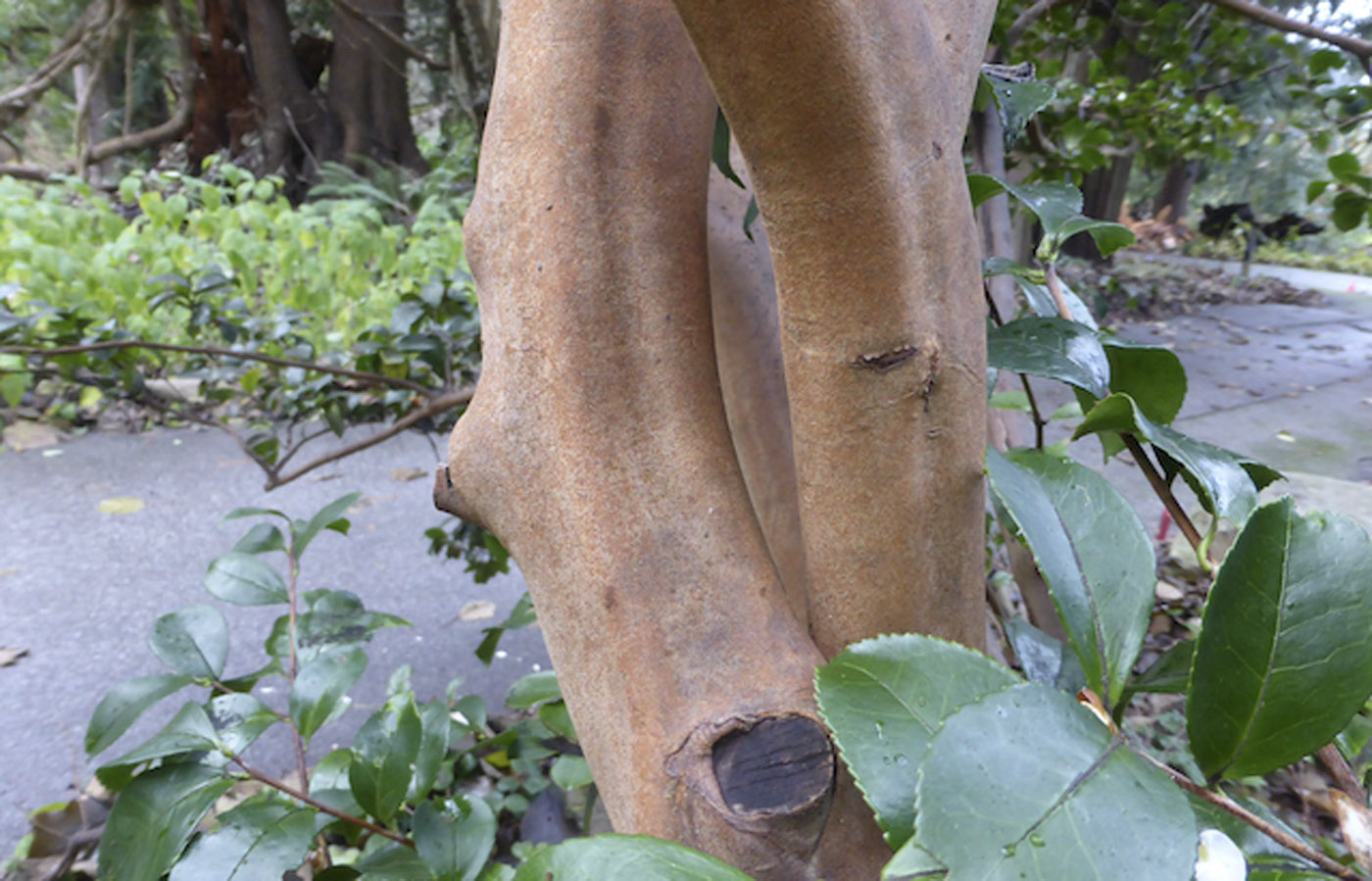 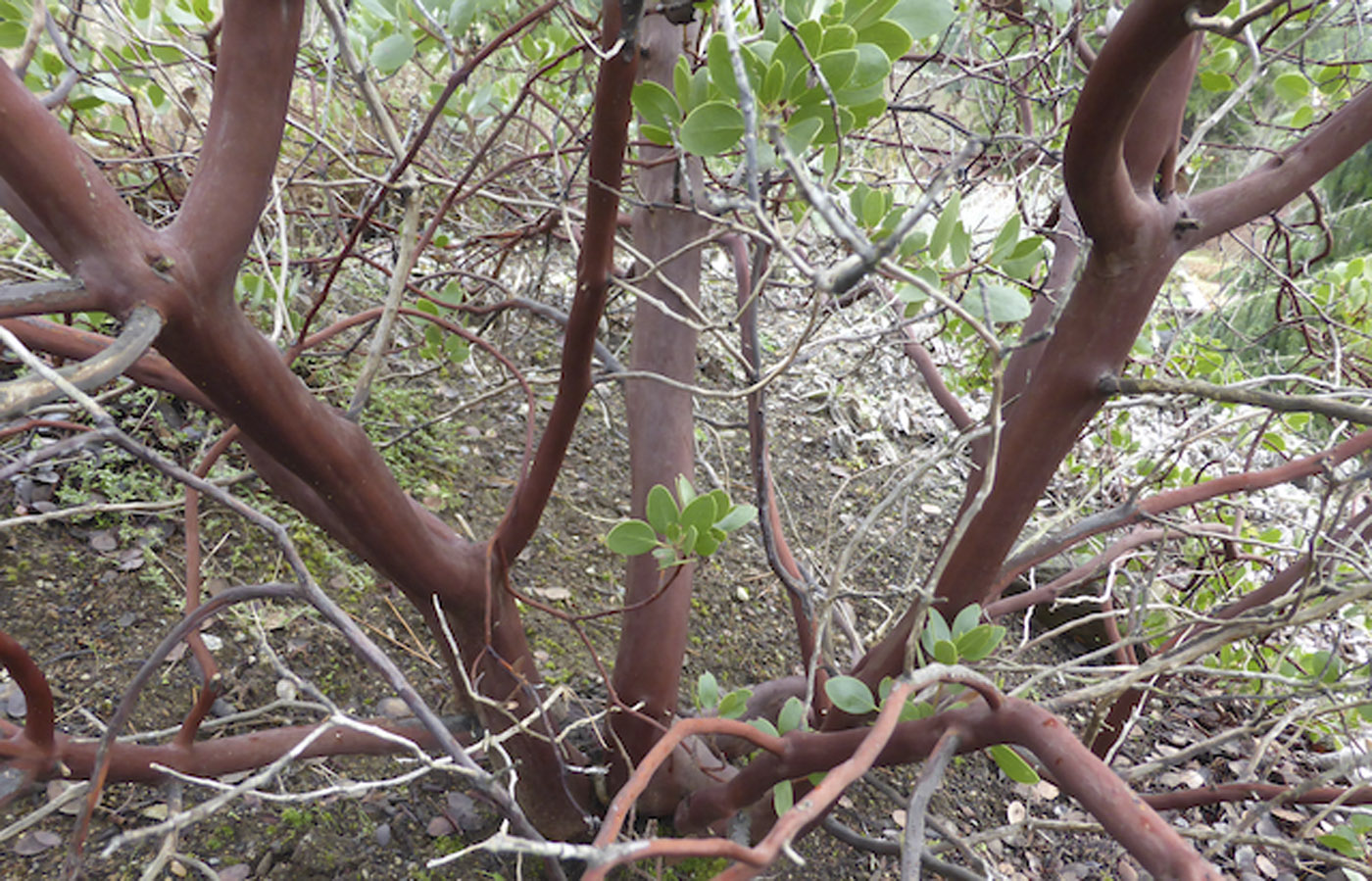 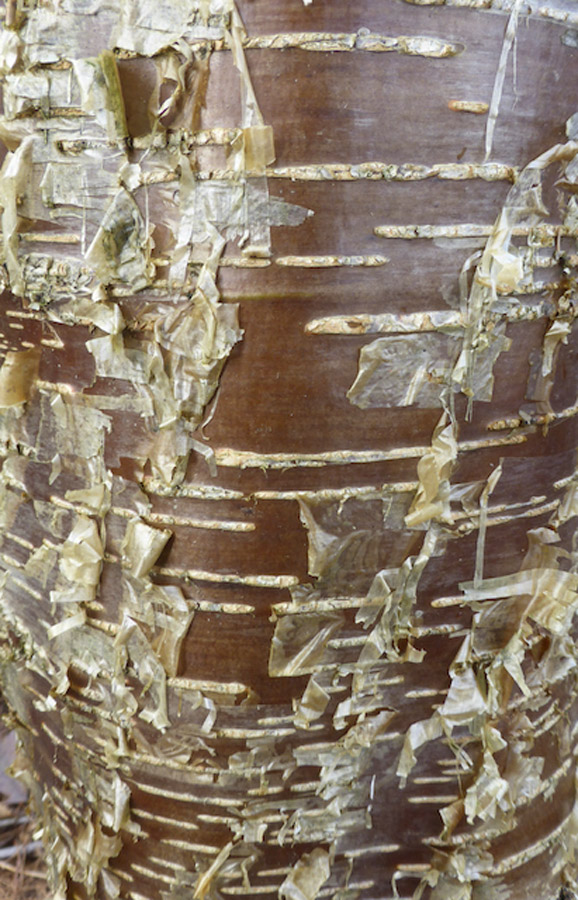 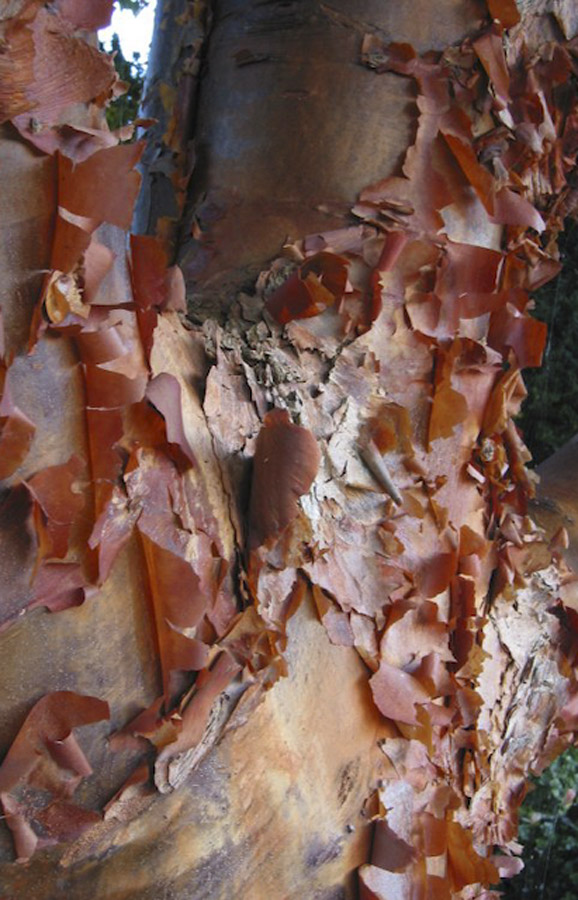 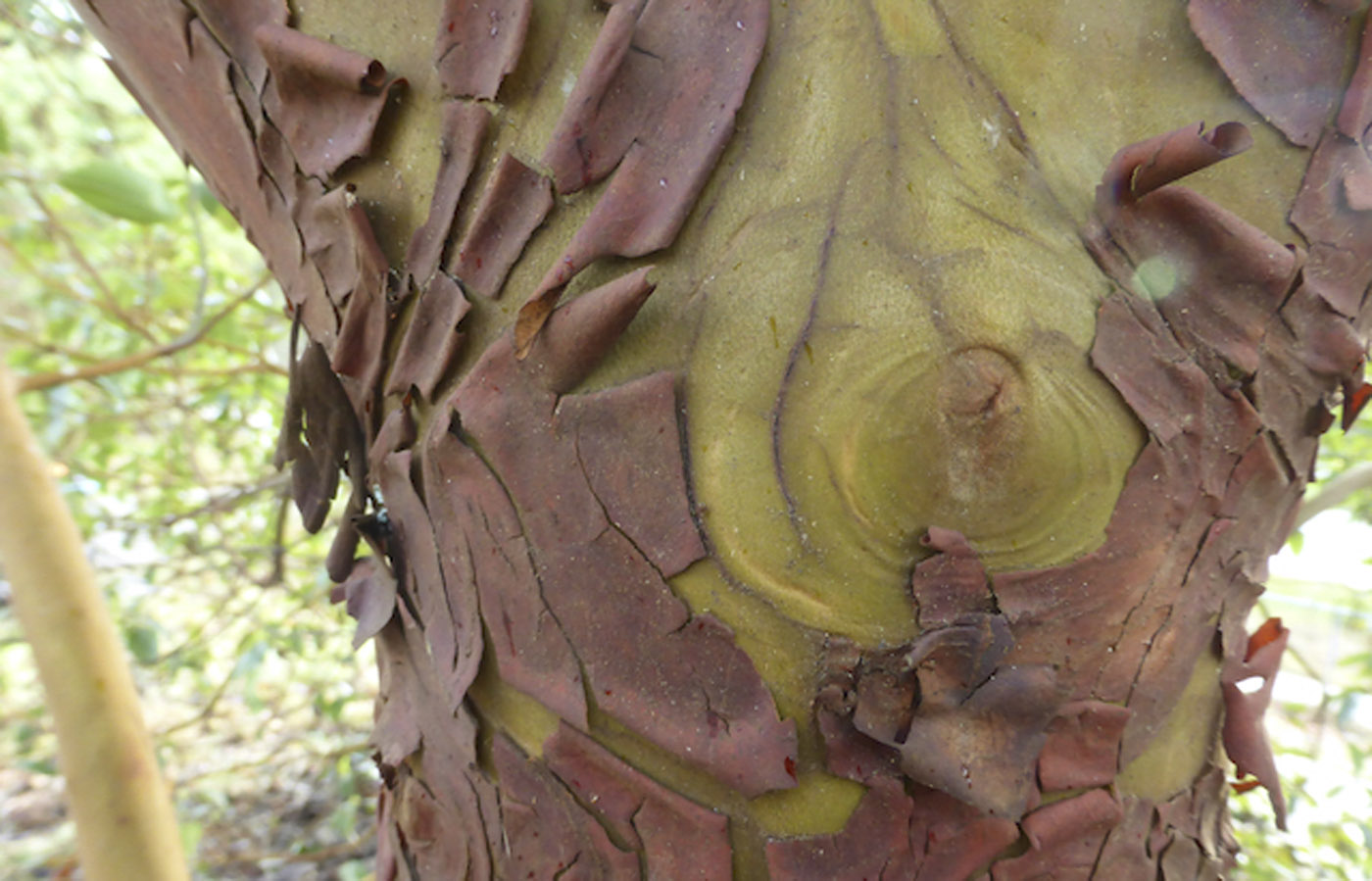 One response to “February in the Garden 2022”