December in the Garden 2021

It appears I last wrote about viburnums at UBC Botanical Garden about ten years ago. Not much has happened to the genus in the intervening years—few new discoveries or changes in taxonomy to speak of—but we’ve added a number of plants to our collections and these total some 55 species and 26 assorted hybrids and cultivars. In all, there are three times that many wild species, mostly native to temperate habitats around the Northern Hemisphere, with a small number extending into subtropical montane regions of SE Asia and northern South America. You can imagine my surprise in seeing viburnums while looking at wild magnolias in the Andes mountains of Colombia a few years back.  While viburnums, in general, are often the toughest of ornamentals, no discussion of these plants should neglect to mention the viburnum beetle (Pyrrhalta viburni), an invasive pest that has wreaked havoc with a wide range of species. Visitors may indeed see evidence of these leaf-chewing pests in the Botanical Garden. Particularly at risk are those species with deciduous, especially thin-textured leaves, but nearly all viburnums appear to be susceptible to some degree. Damage can be so extensive on some that plants may be killed outright after 3 or 4 years of repeated attack. Fortunately, most of our evergreen viburnums are not badly affected.

Viburnums include both deciduous and evergreen shrubs and while a diverse lot, they can usually be recognized by their toothed leaves arranged in opposite pairs along the stems, mostly flattened clusters of small white flowers and berry-like fruits. Once the fruits are stripped from the deciduous types at this time of year, the evergreens come into their own, and the David C. Lam Asian Garden is a good place to see them. Viburnum cinnamomifolium is a large shrub or small tree widely planted in the Asian Garden, so named because the triple-nerved leaves resemble the leaves of Cinnamomum (cinnamon). One of my favourite plantings is immediately below the Ting (at the far end of the entrance boardwalk). These plants are more than 3 m (10′) tall, their beautifully textured, 15- to 20-cm (6- to 8-inch) -long leaves now a foil for the expanding crown of the rare Wollemia nobilis (Wollemi pine) planted to the west of the viburnums. A closely related species, but one that is more familiar to most is Viburnum davidii, a sturdy, spreading shrub, also with big, bold, glossy, dark green, triple-nerved leaves. The two viburnums are much alike, differing only in upright vs. spreading, more compact growth. Like the rest of the viburnum clan, these species are reluctant to bear fruit unless pollen from a different individual of the same species is in the vicinity (just like apples, cross-pollination is necessary for fruit set). With David’s viburnum, the fruits are small, but a beautiful porcelain blue, while the taller species has smaller, darker blue fruits. There is a fine patch of V. davidii at the corner of Stearn and Siebold Trails. Although a handsome woodlander, because of overplanting and ill-considered siting (they’re seldom planted with enough space), David’s viburnum has lost much of its cachet with gardeners. I’ll let garden visitors judge whether this species is attractive or not.

Another evergreen viburnum with conspicuously glossy leaves is the less well-known, Viburnum foetidum. A suckering shrub with densely produced arching stems, the neat, 2.5-cm- (inch-) wide, lobed leaves line the stems in two dense ranks. The Latin name would suggest that this is a smelly shrub (foetidus = unpleasantly scented), but bad smells aren’t particularly noticeable. To be sure, the leaves need to be crushed or torn to smell much of anything. There is an exceedingly handsome example of this species on Kingdon Ward Way between Delavay and Henry Trails. Staying with the theme of lustrous-leaved viburnums, our most glossy has to be Viburnum awabukii, which is native to Japan, Korea, and Taiwan. This is an impressively tropical looking, almost tree-sized evergreen viburnum that produces stout, stiffly upright branches generously clothed with 20-cm (8-inch), bright green, narrow, cupped leaves. The leaves are so shiny they light up even the shadiest of corners. We have two colonies of the Awabuki viburnum that are both in shady corners: one tucked in near the corner of Campbell and Beer Trails; the other is in the bed northwest of Wilson Glade, just off Wilson Trail before the intersection with Henry.

Of course, not all evergreen viburnums have glossy leaves. On Kingdon Ward Way by Henry Trail is a colony of Viburnum chingii (Yangbi viburnum), a huge, sprawling shrub with seemingly undersized, dull green leaves. This viburnum is best known for its spectacular, floral displays in May and June. The flower buds of the small, sweetly fragrant flowers are bright pink and they open pure white in drooping clusters. These plants flower heavily and also set plenty of fruit because the original planting includes several seedlings that freely cross-pollinate. Viburnum cylindricum (on Delavay Trail near Kingdon Ward Way), is known as the scribe’s viburnum on account of its dull waxy leaf surface, which marks with even the lightest pressure from any kind of stylus. We don’t encourage people to mark up the envelope-sized leaves, but one can occasionally see communications from horticultural and botanical mischief makers (“HTP was here,” “Compound Cymes Rule,” “I ♥ Carl von Linne,” etc.). Other than the interesting leaf characteristics of V. cylindricum, it is not unlike Awabuki viburnum in stature. Further along Delavay Trail is an example of our largest viburnum, the formidable Viburnum rhytidophyllum, the leatherleaf viburnum. The stems of this shrub can grow to 8 m (25 feet) tall, although they seldom reach more than half that in the Asian Garden. The leaves are often 30 cm (12 inches) long or more, with a conspicuously wrinkled texture (rhytido = wrinkled + phyllus = leaf), and the leaf undersides and young stems are coated in a vestiture of easily-detached light-coloured hairs. This is an attractive feature, but the hairs can bother people with respiratory issues, such as asthma, so it’s best not to unduly handle the shrub.

Finally, one of the most unusual of the Botanical Garden’s broadleaf evergreens, and another dull-leaved viburnum, is Viburnum henryi. Reproductively-mature plants tend to produce conspicuously divaricating (wide-spreading), dichotomous (paired) branches, giving the plants an odd, geometrically-twiggy texture. Its leaves are leathery and thick, purplish green when young, then dull dark green with age; in winter they are often purple-stained, particularly at the tips.  Small, creamy-white flowers are produced in conical clusters at the tips of the new branches in June or July; however, because our plants are derived from a single clone (they were all produced from stem cuttings originating from a single plant), these plants do not produce the distinctive, red-turning-black, lozenge-shaped fruits. Look for plants at the corner of Upper Asian Way and Kingdon Ward Way and around the corner to the southeast on Henry Trail (note that directly across Upper Asian Way is a group of V. davidii that show the kind of damage that viburnum beetle can exact on these plants).  We are fortunate that colleagues from our plant-collecting group, the North America-China Plant Exploration Consortium (a group of like-minded botanical gardens) have supplied us the seed of a number of viburnums—including V. henryi—from a recent collecting expedition in Sichuan, China. Seedlings of the newer collections will be planted nearby so that that eventually, all of our Henry’s viburnums will bear fruit. 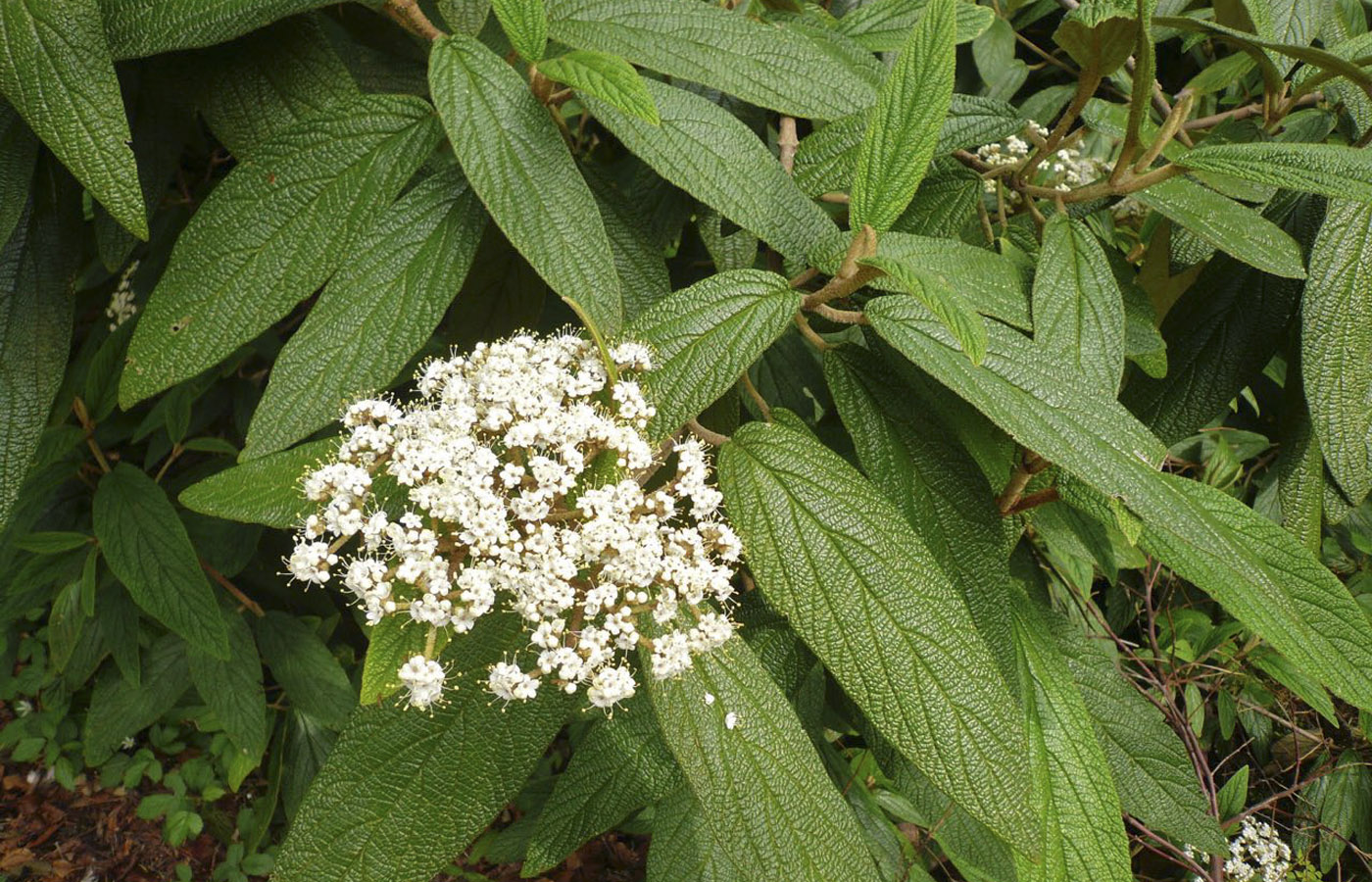 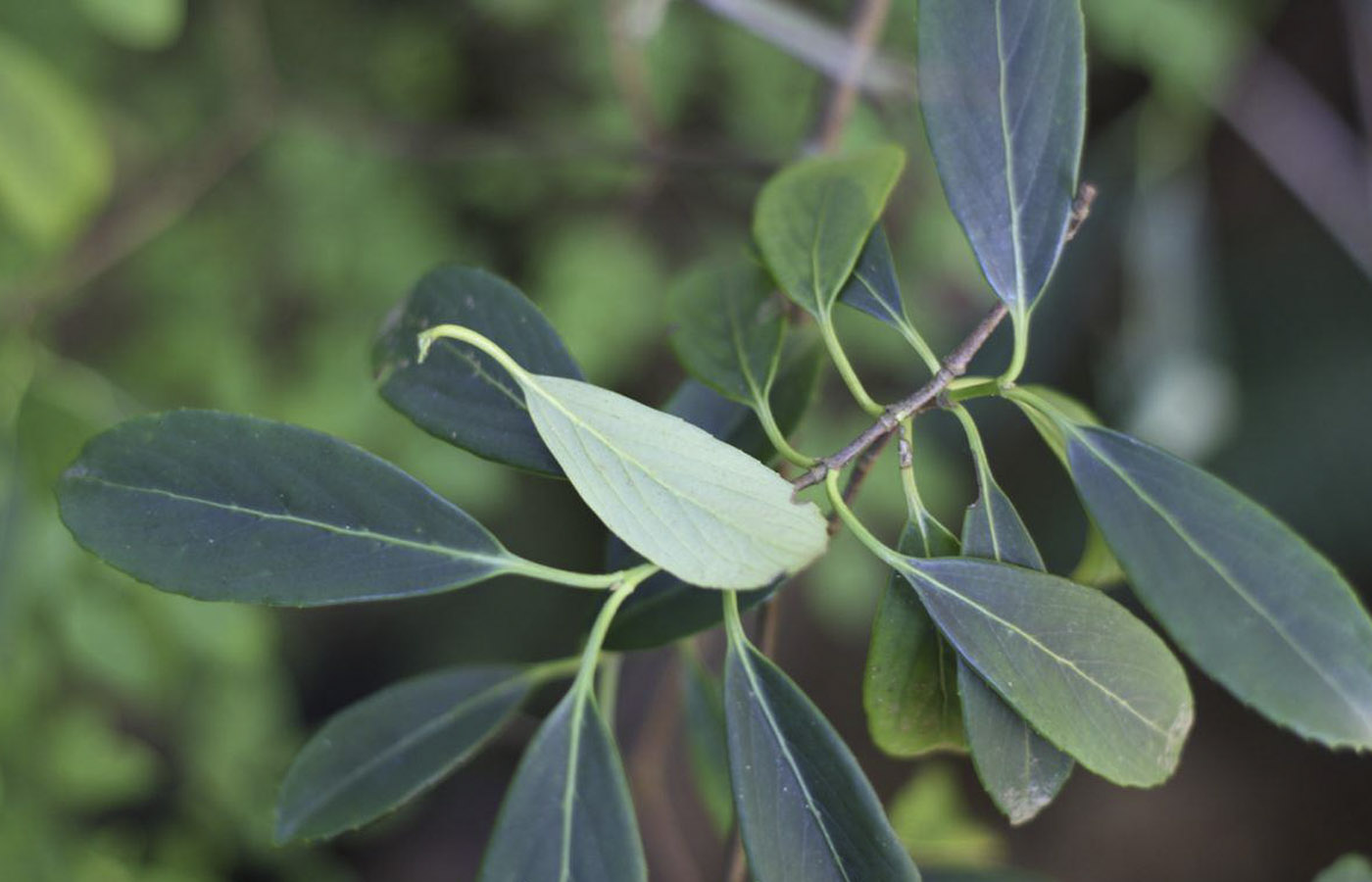 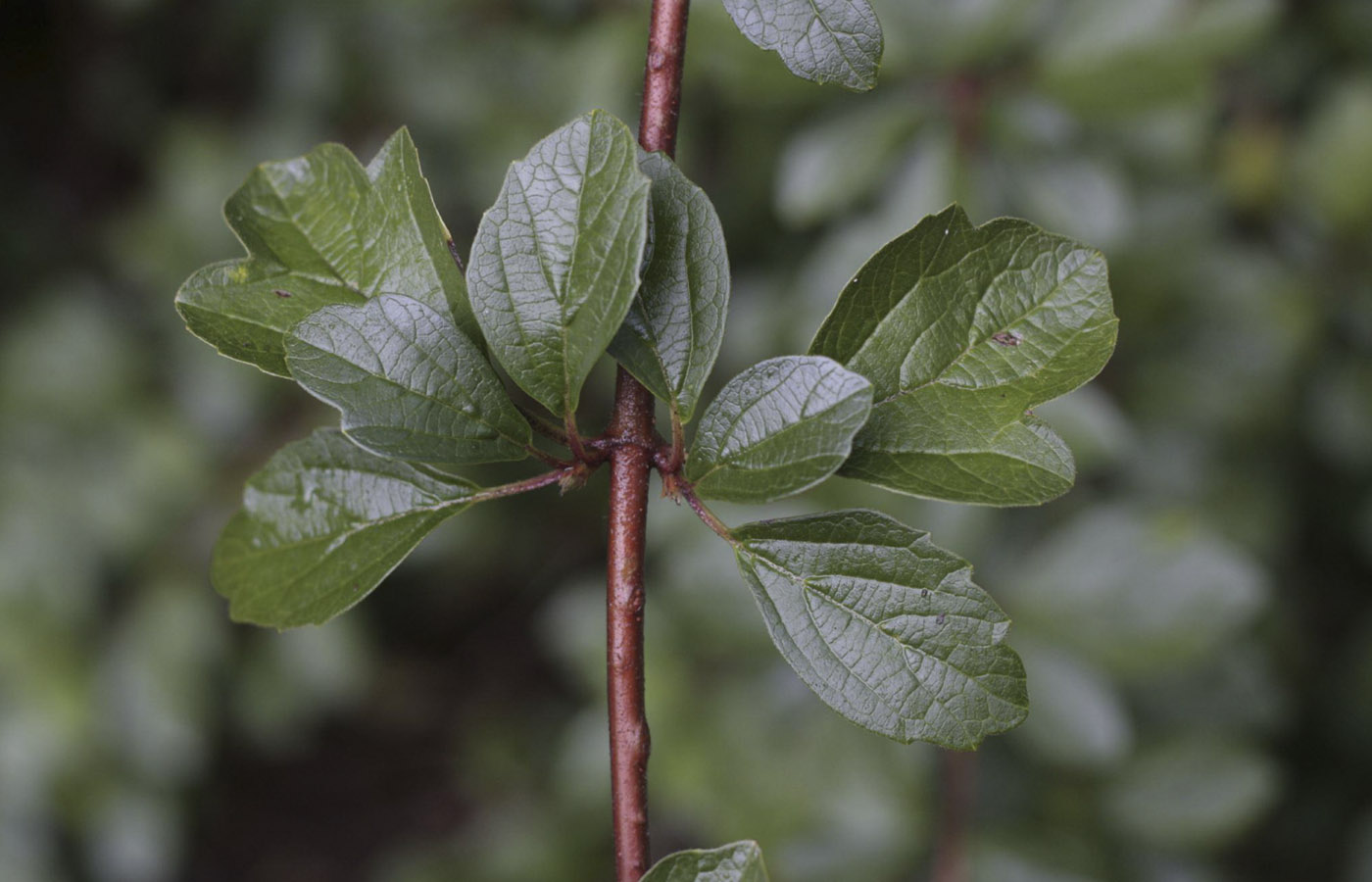 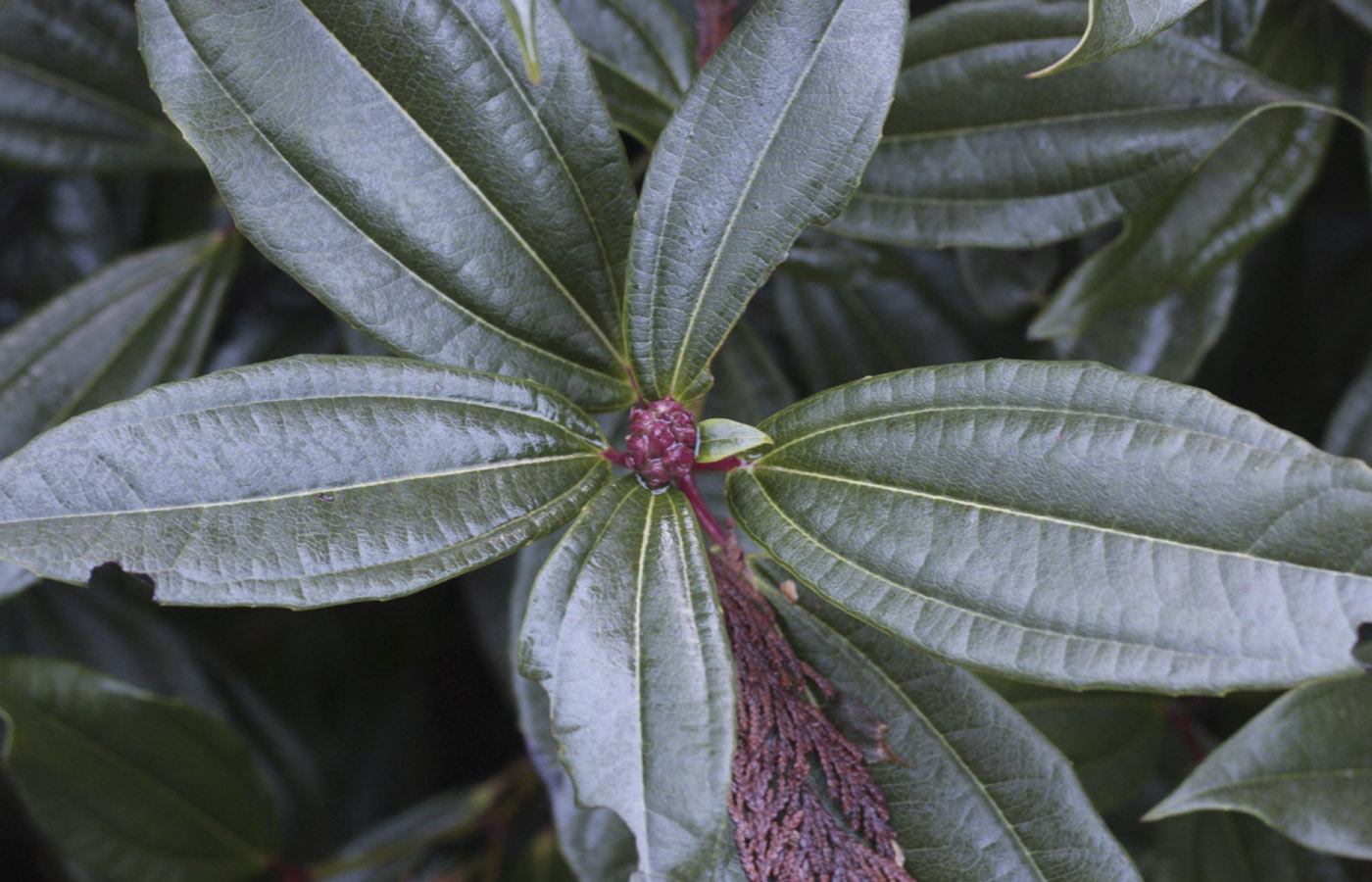 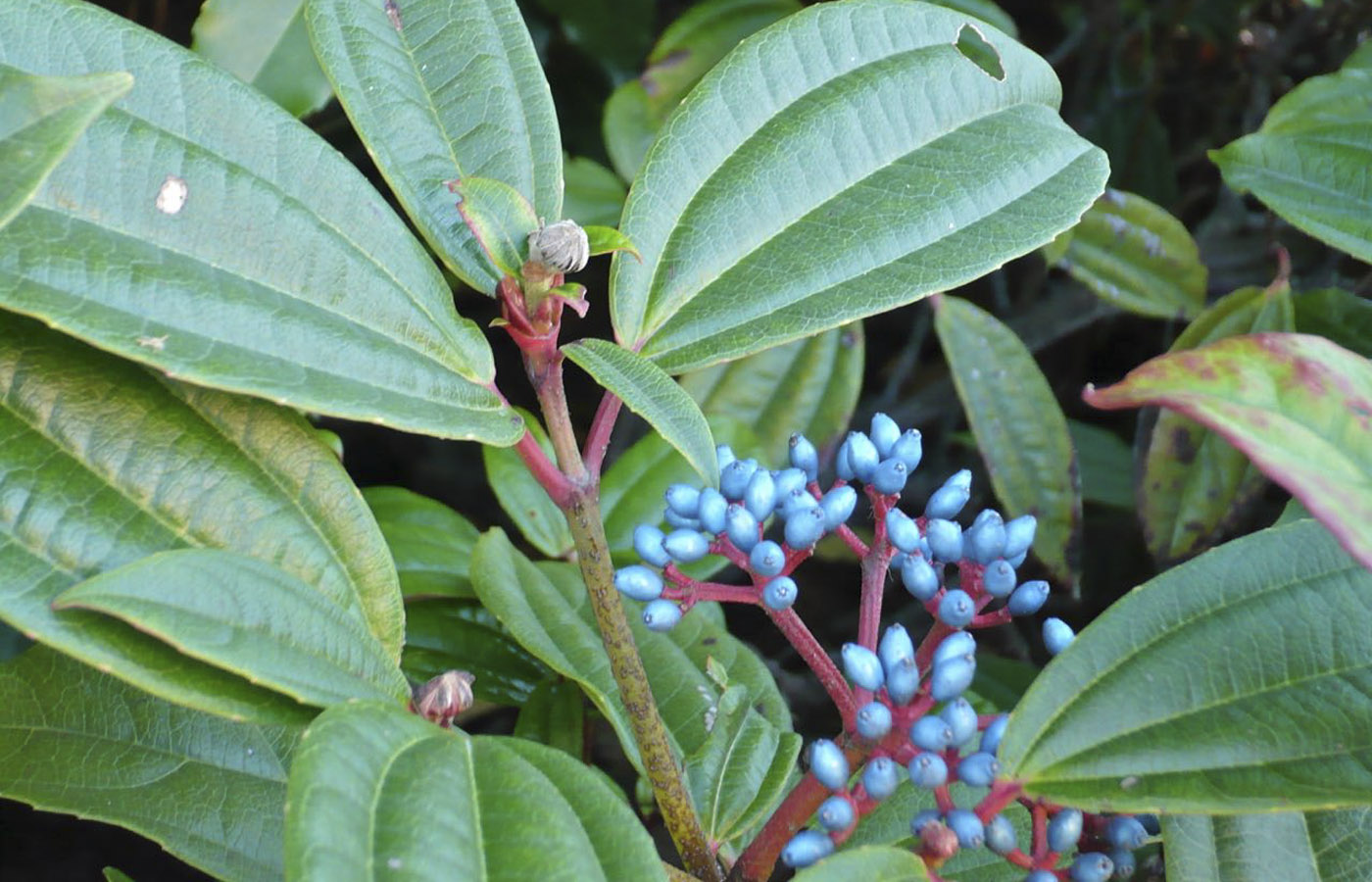 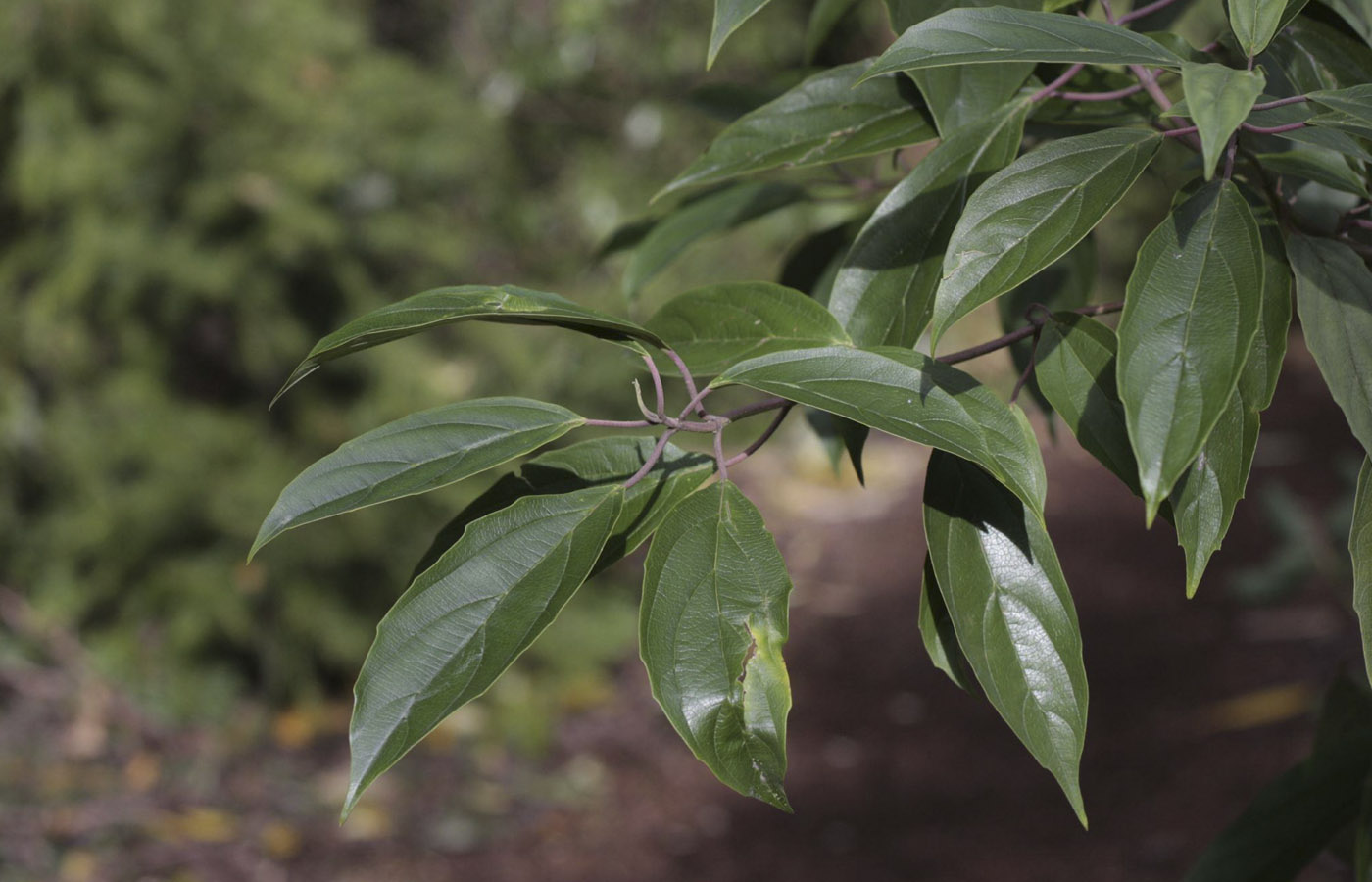 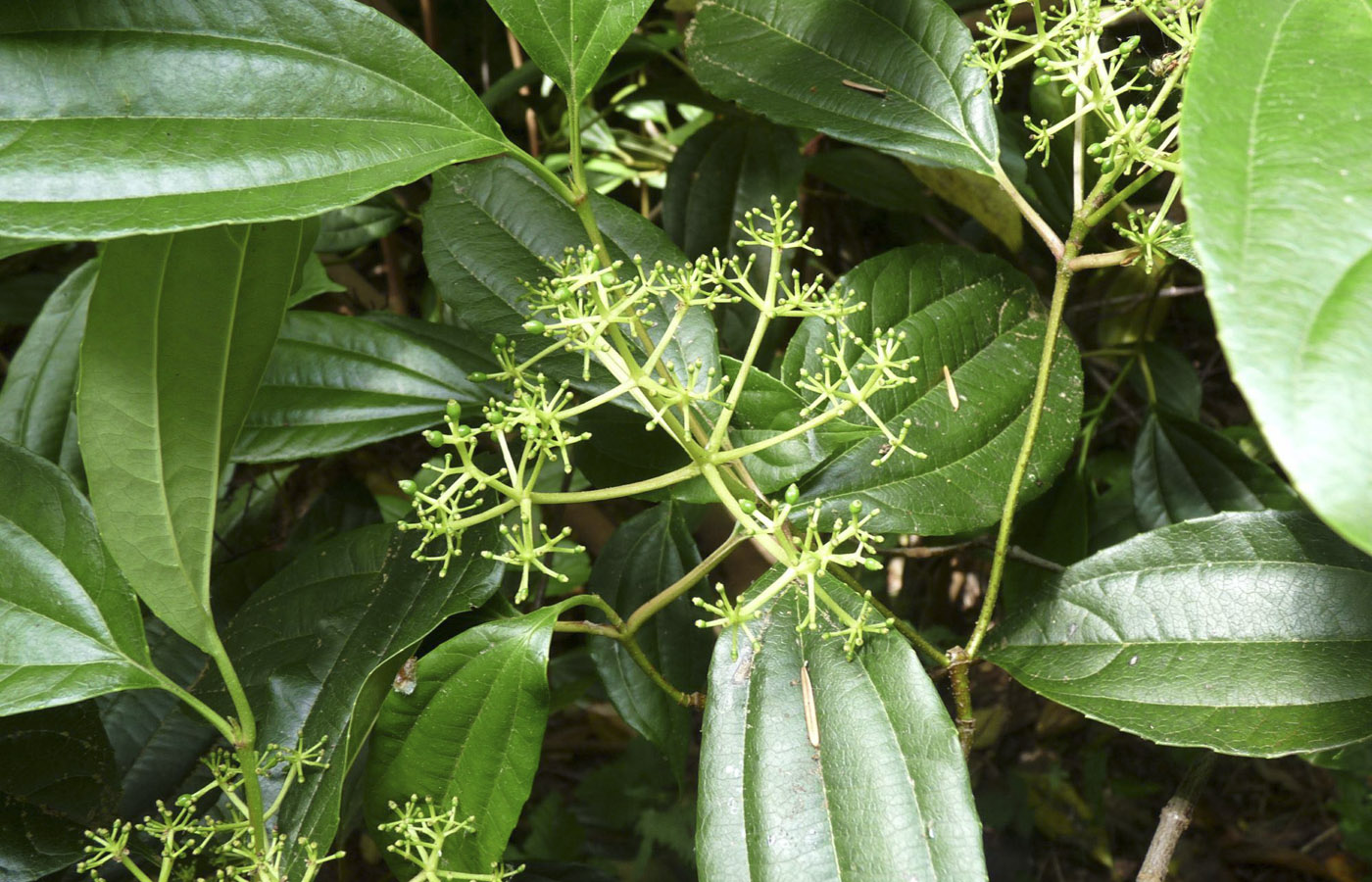 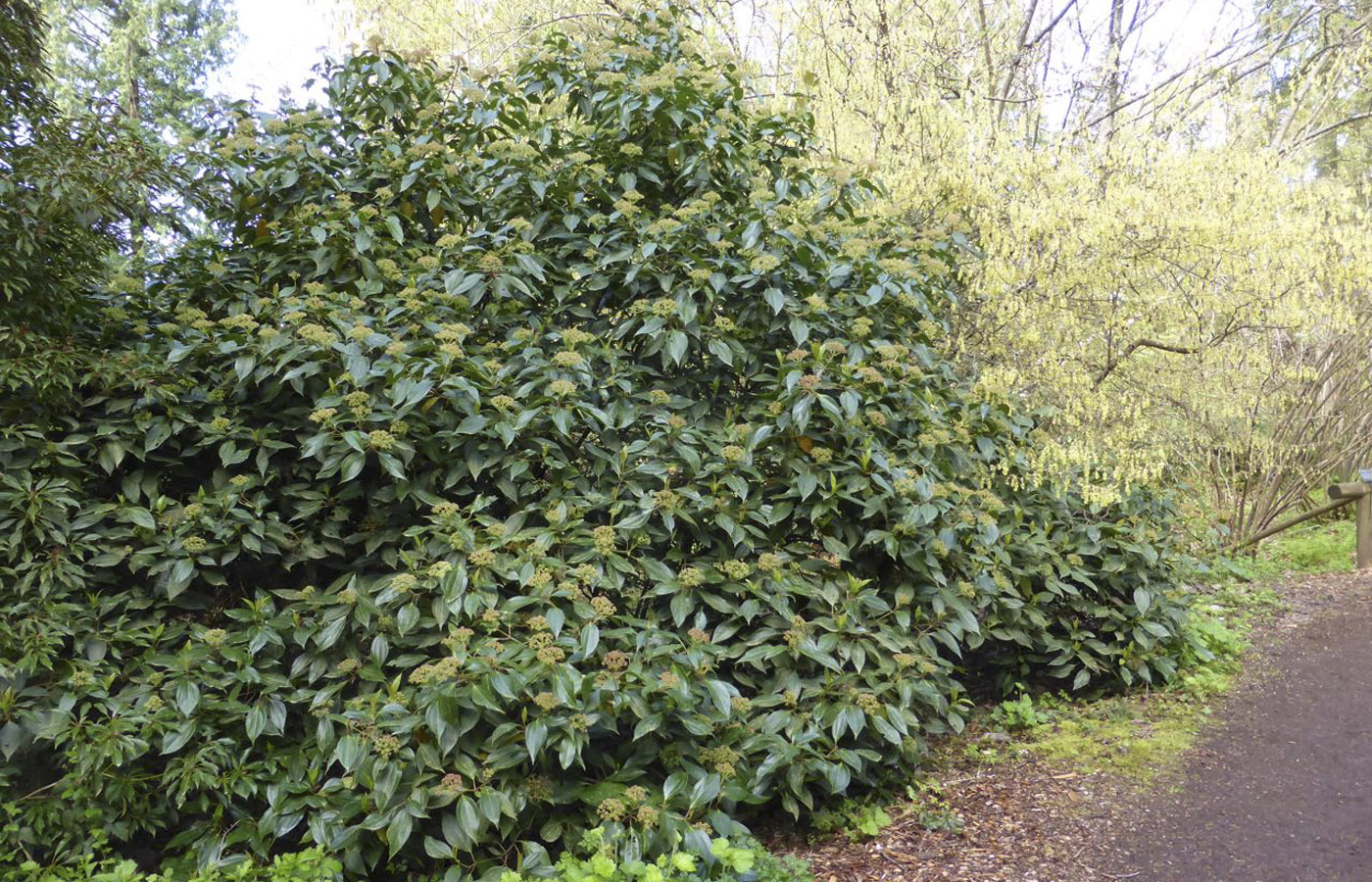 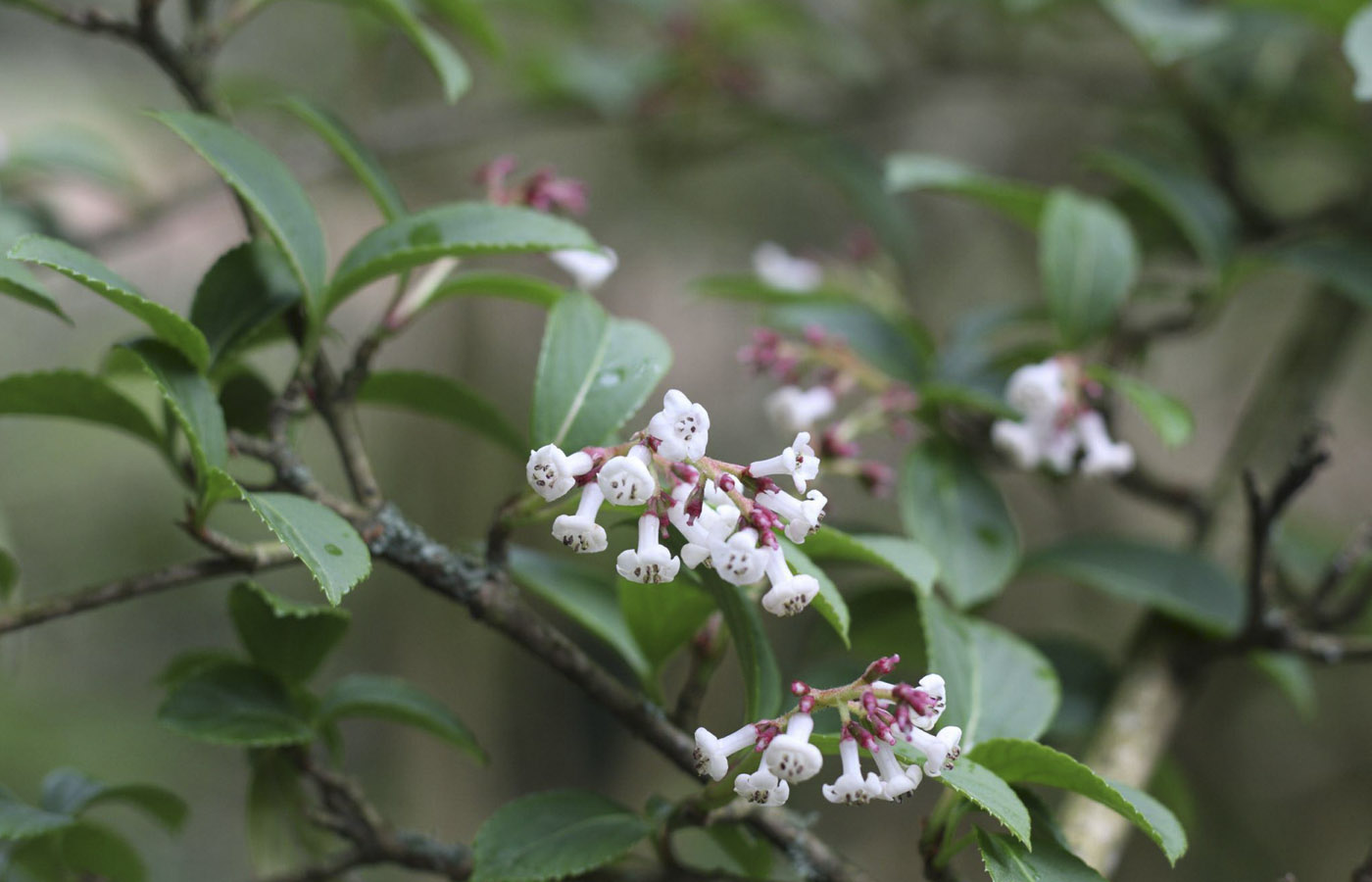 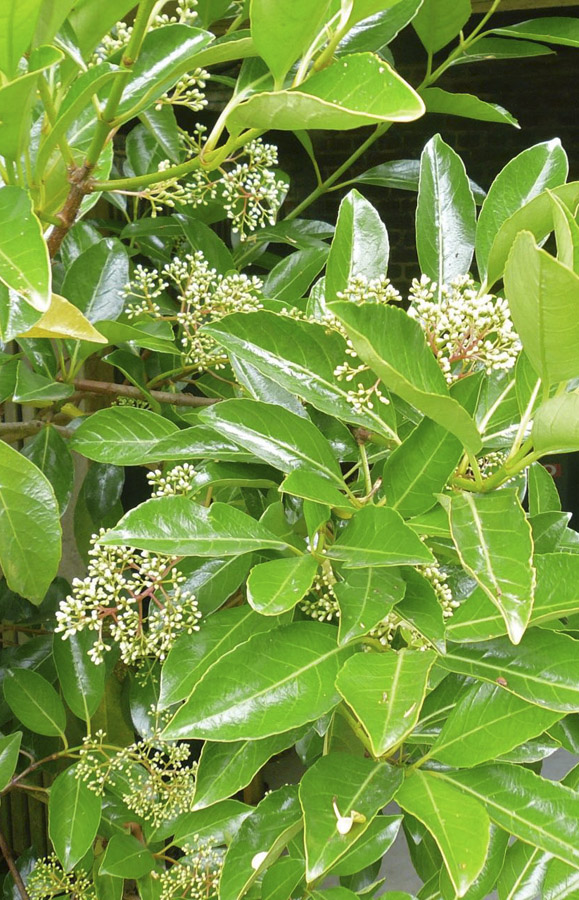